In graph visualization, subway map visualization is a classic visualization method, which arranges the nodes in the graph as evenly as possible in the space, while keeping the edges as much as possible and the topology of the final layout and the original graph nodes as much as possible. At the same time, in the actual diagram layout, in addition to improving the readability of the diagram, it is sometimes necessary to embed some specific motivations (motif) into the diagram, which can improve the artistic effect of the diagram layout, and may also improve the user’s understanding of Cognitive abilities of layout.

In the paper “Shape-Guided Mixed Metro Map Layout” [1], Tobias Batik et al. of the Vienna University of Technology proposed a hybrid layout method that combines metro map layout and shape embedding (Fig. 1), which can support user While the defined shapes are embedded in the final map layout, the overall map layout is optimized to the subway map standard.

Figure 2: Design Requirements for the Algorithm

Figure 3: The pipeline proposed in the paper

To embed a shape into a subway map, it is first necessary to decide which points and edges are to be laid out into this embedded shape, which is the first step of the whole algorithm, shape matching. In the paper, the author uses the Direction-based Frechet Integral distance[2] to measure. Using this method to calculate, can make the matching non-deformable with translation and scaling, and because in the actual layout, the discrete folding is involved in the calculation. line segment, so it can be solved relatively simply using dynamic programming.

Since it is difficult to determine which is the optimal eight-linear direction of each edge at the beginning, the optimization is divided into two steps. First, the first four energy functions are used to optimize the general layout, and then the optimal layout of each edge is determined according to the current results. Similar eight linear directions, and then add the fifth energy function to the optimization.

Even after layout optimization, there are some obvious areas for improvement in the graph layout, which will be addressed in the fine-tuning step (Figure 4). The first problem is that since the current edges are all straight segments, even if the points are arranged according to the shape, it is difficult for the user to recognize the embedded shape, so the edge that matches the shape should be adjusted to the corresponding curve on the shape. The second is that you can use network alignment, and yes, the overall point arrangement is more regular.

Figure 4: Results before and after fine-tuning

After the above steps, the layout method can better solve a map layout that has both subway map characteristics and can display user-defined shapes (Figure 5). 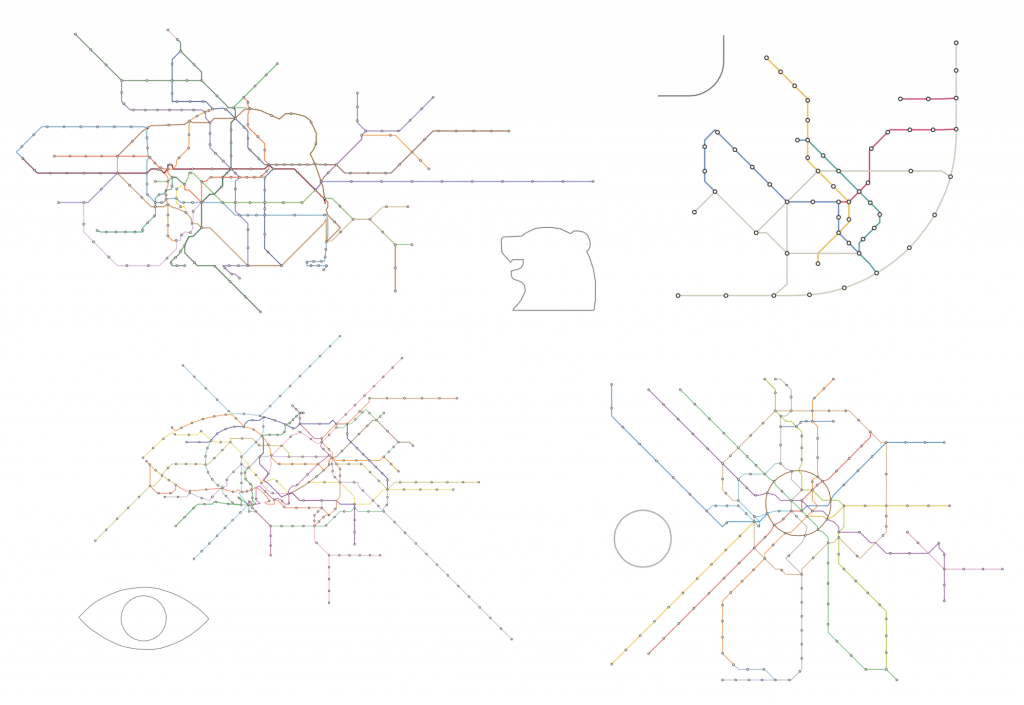 In the user experiment of this paper, the author said that when the embedded graph is simpler and the embedding effect is more obvious, the user can achieve better efficiency in the pathfinding task. In large-scale graph layout, if suitable shapes can be automatically embedded in different blocks of the graph according to the corresponding characteristics, this may also improve the user’s cognition and memory of the graph to a certain extent, which may be a future worthwhile. direction of exploration.

This article is reprinted from: http://vis.pku.edu.cn/blog/shape-based-mixed-metro-map-layout/
This site is for inclusion only, and the copyright belongs to the original author.