Seeing # Lao Siji Hard Core Evaluation # initiated by @Today’s topic , this issue is the theme of military industry, I will not be sleepy immediately. My feelings for military industry are still relatively complicated. I grew up as an enterprise president and later studied in a school with a national defense background. I sincerely hope that our country’s military industry can develop well, but the ideal is very full and the reality is very skinny. Most military enterprises have their own difficulties because of their particularity. , and because of the frequent skyrocketing and plummeting of military stocks, the title of “scumbag” has also been left behind. Today, let’s talk about how to intervene in the military industry!

Too long to read version:

The military industry is special. Since the growth of the industry, the military budget has increased. In the long run, the growth rate of the industry is not large, and the return on investment in historical backtesting is also limited (the index is annualized by 6.6% in five years, which is very consistent with the growth of military expenditure), but the volatility of the industry is very high. Large, there is huge room for obtaining excess returns. Compared with buying flat strategies or index funds, swing strategies and active funds that select stocks at the right time may have better performance. I think the funds are not bad:

$CMB High-end Equipment Mixed A(F014606)$ : The newly established fund has achieved far more than the market average in the period since its establishment, but the reference value is not high due to the short period of time. But the fund manager is a fierce man. Before becoming a fund manager, he was the chief analyst of the military industry who won the New Fortune Award, and he is also the only doctor of science and engineering among the ten funds (the rest are related to management or economics). Compared with the financial background after entering the industry People who supplement industry knowledge I prefer people who have industry background to supplement financial knowledge.

Huaxia Military Industry Security Mix: It was established for six years, and it is different from Hua’an Security. The current scale is 4.6 billion. This fund is a very pure military industry-themed fund, and it will not be cheap in style. Moreover, the fund prefers aerospace stocks. I personally think that in the military industry Aerospace has higher growth potential.

How about the military industry, how to vote?

The pricing power of military products is entirely in the state , and there is no way to increase the profit of products. Of course, this is understandable, because military industrial enterprises also undertake the mission of strengthening national defense, and the investment required for military product innovation is basically astronomical, as far as enterprises are concerned. Can’t afford it at all. Therefore, the status quo is that all research institutes are basically funded by the state. If there are new products companies that cross the era, they will also earn processing fees. Moreover, the 2g project has a long account period and is difficult to pay back, but if it can be delayed for three years, it will not only be delayed. one year.

In addition, the military industry is also very unfriendly to investors. Military industry companies are generally highly confidential and have low transparency, making them very unfriendly to individual investors. The graduation thesis of our school is not available on CNKI due to confidentiality issues, not to mention the core information of military enterprises with heavy defense equipment. It may take fifty years for projects that bring profits to enterprises to be unsealed and told to you.

Finally we look at a data:

In 2017, the defense budget will increase by about 7%, and the budget will exceed 1 trillion yuan. In 2018, China’s defense expenditure was 1,107 billion yuan, and in 2019, the defense expenditure budget was 1,189.9 billion yuan, an increase of about 7.5%. This is the fourth consecutive year of my country’s defense budget. With single-digit growth, China’s defense spending budget in 2020 is 1,268 billion yuan (about 178.2 billion U.S. dollars), an increase of 6.6% over the previous year, and 1,379.544 billion yuan (about 209 billion U.S. dollars) in 2021, an increase over 2020 6.8%. China’s military budget this year is 1.45 trillion yuan, a year-on-year increase of 7.1%, while the annualized income of the military industry index in the past five years is 6.77%, so in the long run, the growth of military enterprises still depends on the growth of military budgets, and this growth Obviously not high growth.

Therefore, I personally think that the value and growth of military enterprises are not strong, but the shareholding ratio of military industry institutions and the state is very high, so that a small amount of capital can cause great fluctuations in stock prices . In addition, the military industry is very It is easy to be influenced by policies and sentiment, so the volatility of this industry is huge, and there is a strong room for excess.

How to choose the military industry fund?

A total of 10 military industry funds have been selected in this issue. Let’s take a look at the basic information of these funds: 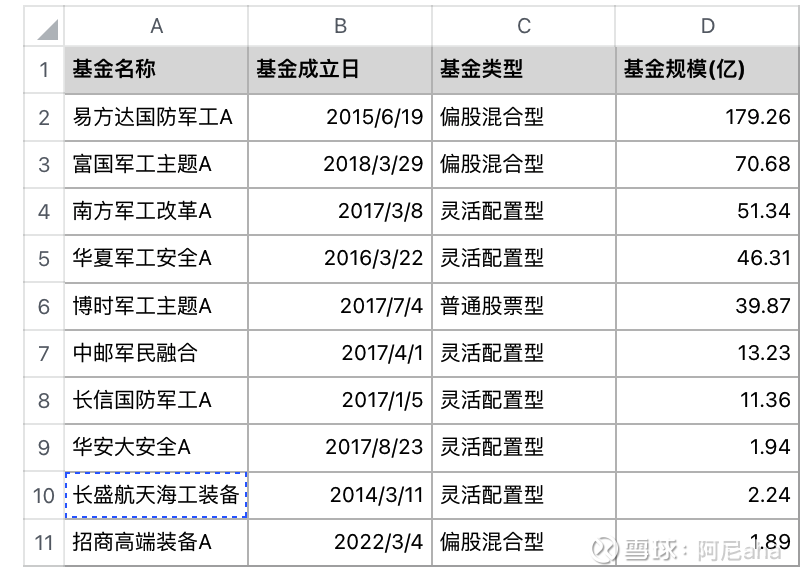 Scale: At present, the total scale of the military index is 710 billion. The highest market value among the constituent stocks is 60 billion, and the median is 12 billion. Overall, it is not a big market, so funds with too large a scale will be inflexible and may be a drag. The performance of these 10 products is less than 10 billion except for the scale of E Fund’s defense and military industry, which is close to 18 billion.

Another look at fund managers: Feng Fuzhang is a fierce man. Before becoming a fund manager, he was the chief analyst of the military industry who won the New Fortune Award. He is also the only doctor of science and engineering among the ten funds (the rest are management or economic-related). Knowledgeable people I prefer people with industry background to supplement financial knowledge.

In addition, Wang Ning and Zhang Xufeng are both ten-year veterans, and Zeng Peng and He Chongkai are tens of billions of fund managers, all of which are worthy of attention.

In the long run, the five-year annualized return of the military index is only 6.77%, and all active funds have significantly outperformed the index, which also proves that there is a high excess space in this industry.

Among them, Huaan Daan has a brighter performance. However, from the perspective of the income year, the fund’s performance in 2019 was twice that of other military funds. From the follow-up performance, this level of performance cannot be maintained. The performance of the national defense industry is not only high but also stable, which is very easy to reach.

Since they are all funds that maintain high stock positions, we will directly look at the stock industry distribution.

Let me first explain that I am not very familiar with non-aerospace military enterprises, especially electronics. Basically, military electronics are basically my blind spot, so I can only analyze this problem from another angle:

When I graduated, the widely circulated employment choice chain in the school was: Aerospace Science and Technology> Aerospace Science and Industry> China Communications> Chinese Weapons, and from the perspective of the military industry index, six of the top ten constituent stocks were aerospace-related, and combined with From what I have seen about the benefits of military factories and aerospace factories, I personally prefer aerospace. Among these funds, the national defense and military industry of Huaxia Military Industry Security accounts for as high as 84.61%, which is the highest among all funds. It is a very pure military industry stock and prefers aviation equipment, while E Fund and Bosera military industry prefer military electronics, so I Personally, I will definitely stand in Huaxia, but it is only a personal preference.

This is the end of the text. Finally, I wish everyone a fortune~