Some time ago, a doctoral student from the University of Manchester published a paper, which shook the entire European and American academic circles.

The reason for this is not because this paper has excellent results, but because the research direction and research methods of this doctoral student are a bit too advanced:

In order to study “the desires of Japanese subculture manga fans”, he collected a large number of Japanese manga and spent three months conducting an experiment based on himself.

The content of the experiment is to “play hand punch to the Japanese Shota comics for three months, and then record the mental journey of each punch”. 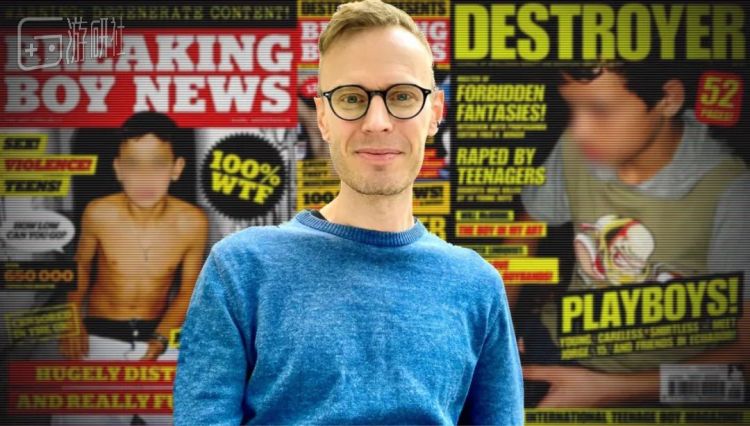 Since the discovery of this virtuous essay, not only has this doctoral student been dubbed the title of “hand-punching doctor”, but the entire academic circle has also been caught in a heated discussion: people were first shocked by the content of the paper, and then began to Questioning whether this is justified—or even legal…

This bizarre handwritten paper is drawing out the dark side of European and American academic circles.

Qualitative Research is an international journal dedicated to the exchange of theory and practice in the humanities. On April 26 this year, it published a paper on Japanese subcultures by Karl Andersson, a PhD student at the University of Manchester.

This Carl Anderson is not an academic leader, and his paper is not too groundbreaking. However, several months after its release, the paper was discovered by netizens and caused a phenomenon-level discussion.

Because no matter from which angle it is slightly bizarre. 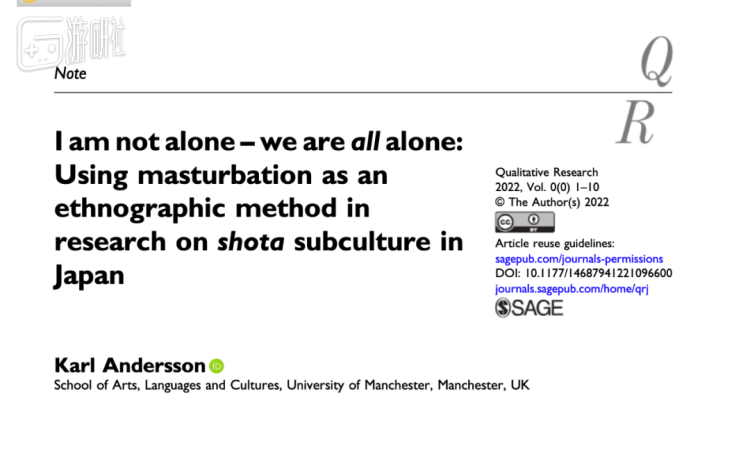 In the introduction, the author Carl Anderson wrote very sincerely:

In the text, he explained in simpler language: he encountered a bottleneck in researching the views of Zhengtai comic readers on “desire and identity”, so he wanted to lead by example and participate in the experiment himself. It’s a form of “critical self-reflection,” Anderson said in the paper.

According to the content of the paper, in these three months, Anderson criticized more than 30 times in total. Perhaps due to space limitations, in the thesis, he only recorded a few critical processes, but they were all in unimaginable detail.

For example, Anderson will not only briefly describe the plot of the Zhengtai comics he has read, but also record where his “rush points” are, and will also summarize his feelings afterwards.

As an author, he is not shy about revealing his hand-pushing process to outsiders, but generously shares his own mental process.

In this essay of about 4,000 words, Anderson wrote his own ideas and views on Japanese shota manga, and described the hand punching experiment in a very academic way. 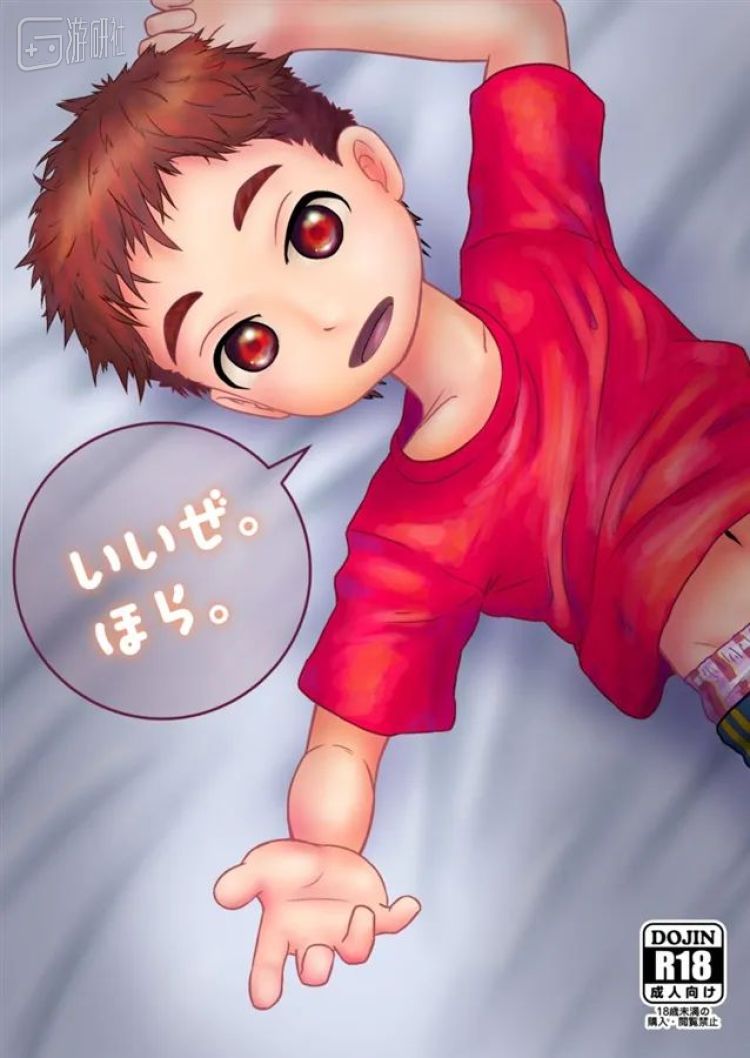 At the end of the paper, he concludes: Fan culture is popular because in a society permeated by massive loneliness, people desire to be less lonely.

Overall, this paper is actually more like the author’s hand-printed diary within three months (with a sage’s time perception version) . 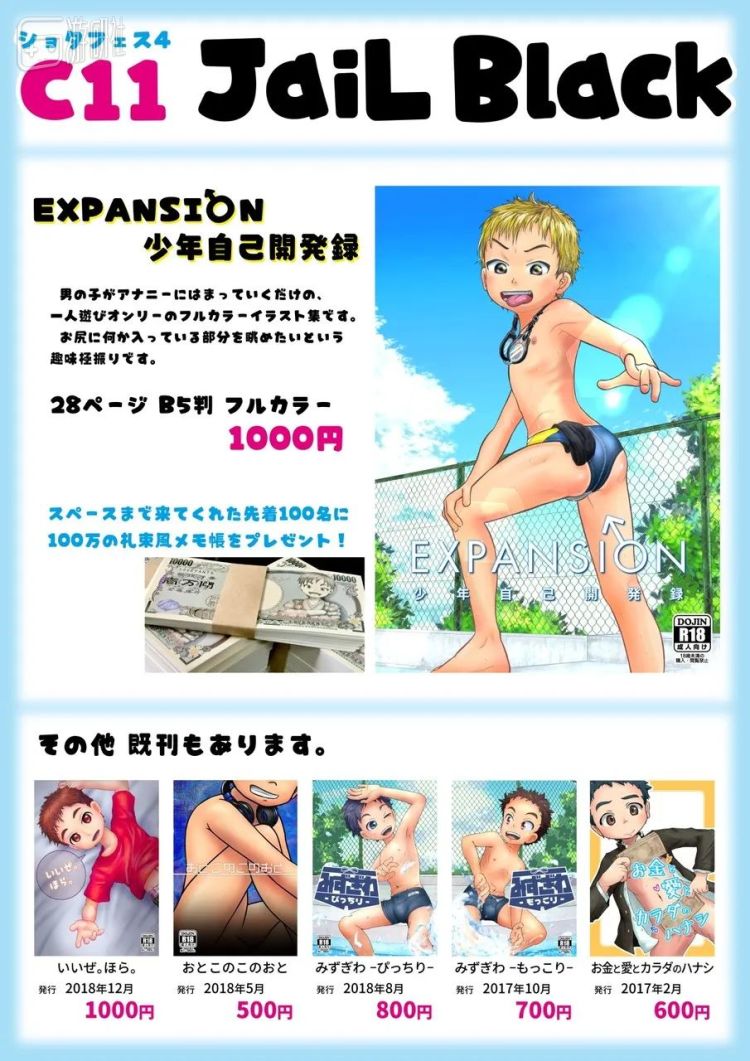 About three months after it was published by the journal Qualitative Research, this “hand-punching survey” was finally discovered by some academic netizens and published on the Internet, which naturally attracted people’s attention.

At the very beginning of the matter, everyone thought it was another “Sokal incident”.

The so-called “Sokal incident” refers to the so-called “academic prank”. The term comes from 1996: A physicist named Alan Sokal submitted a pseudoscientific paper to the cultural studies journal Social Text, mixed with some counterintuitive nonsense, But it was successfully published in the magazine. 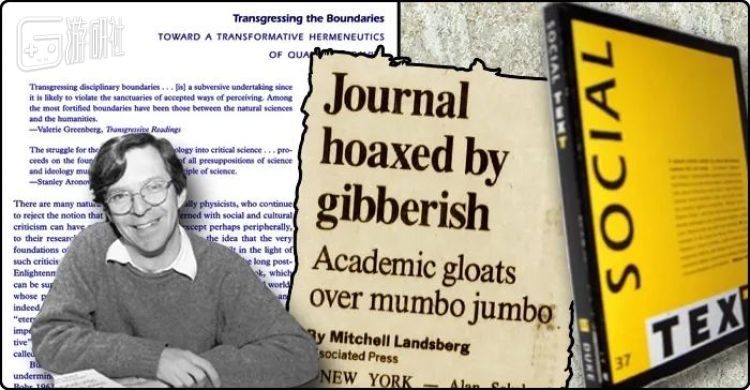 The paper is titled “Beyond Boundaries: Towards a Superform Hermeneutics of Quantum Gravity”

In recent years, similar “Sokal incidents” have emerged one after another, especially in the field of humanities and social sciences.

Among the seven hoax essays are even some that seem bizarre, such as “Human Responses to Rape Culture and the Gay Effect in an Urban Dog Park in Portland, Oregon,” which discusses canine rape culture , and “Entering Through the Backdoor: Challenging Straight Gay, Transgender, and Transphobia through Feeling the Use of Backdoor Sex Toys,” which explores straight men and backdoor toys.

This “Sokal essay” will deliberately select some special fields (such as involving feminism, marginalized people), and then use a lot of academic postmodern vocabulary to compile baseless, fictional absurd articles.

People thought the same was true for this “Zhengtai Shouchongwen”, but later found out that it was not the case.

The author is really serious.

After the paper was noticed, interested people began to investigate Carl Anderson, the author behind the paper, and it turned out that the man appeared to be a genuine Shotacon. Now a doctoral student, he has actually been involved in the “Zhengtai field” early on. From 2006 to 2010, Anderson has created two “boy magazines”: “The Destroyer” and “Breakout Boy News” – both print magazines featuring pictures and stories of young boys.

In these magazines, although there are no directly exposed pictures, they are filled with a lot of “edge ball” content. Although it is legal in law, it is suspected of “sexualizing children”, which has long caused some Europeans and Americans to feel uneasy. 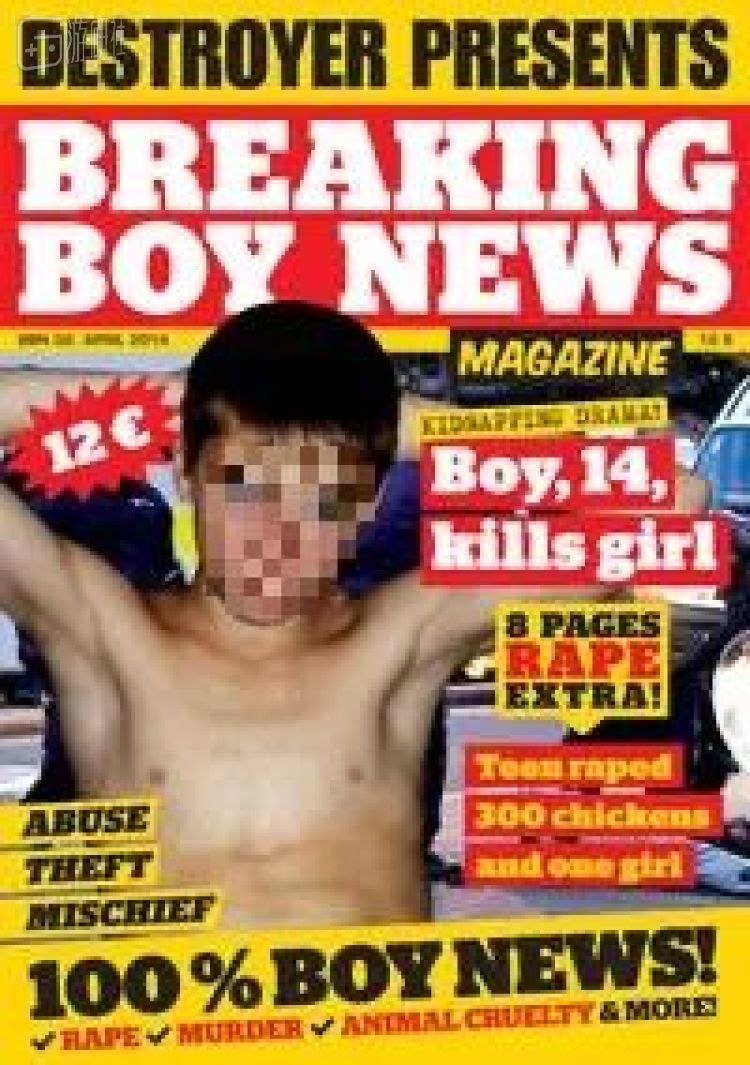 The issue of pedophilia has received special attention in Europe and the United States. It also made Anderson “notorious” during this period, giving him interviews with the media, but has been deftly dodging questions about whether he was actually a pedophile, and calling his magazine “art” rather than pornography. 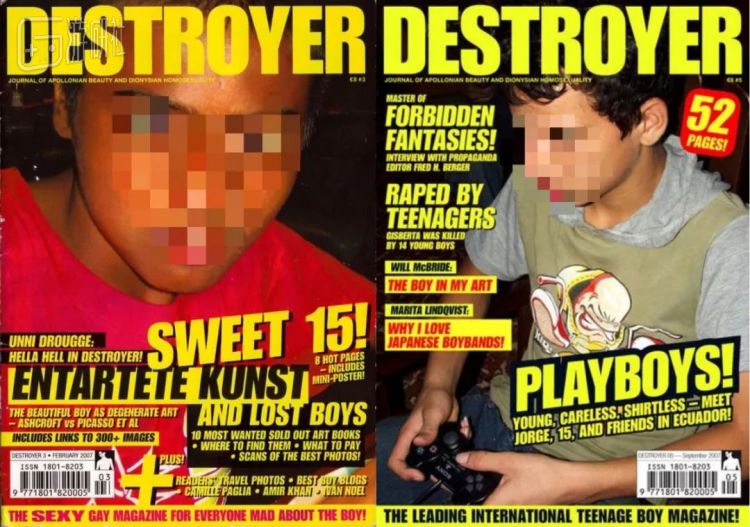 On Anderson’s YouTube personal channel, he often shares the Shota comics he bought from Japan, and has repeatedly praised his love for “Japanese Shota culture”.

Combining these data, it is not difficult to infer that the author of the paper Anderson has a special hobby for Zhengtai/young boys.

And that fact makes the paper even more bizarre: it appears to be a pornographic confession written by a pedophile.

Some netizens also pointed out that although Anderson said in the paper that his research field is “Japan’s Zhengtai Asian culture”, this is actually just another glorified version of “pedophile”. He himself is unquestionably a pedophile (though he staunchly denies it) , and the proof is everything in the thesis – no normal person can do it for three months just by reading Zhengtai comics.

Although scholars inevitably face some ethical dilemmas in the process of academic research, most people are aware of such issues. But this “Zhengtai Shouchongwen” is still a little too challenging to the bottom line of human beings – it is simply a misdemeanor in the name of academics. 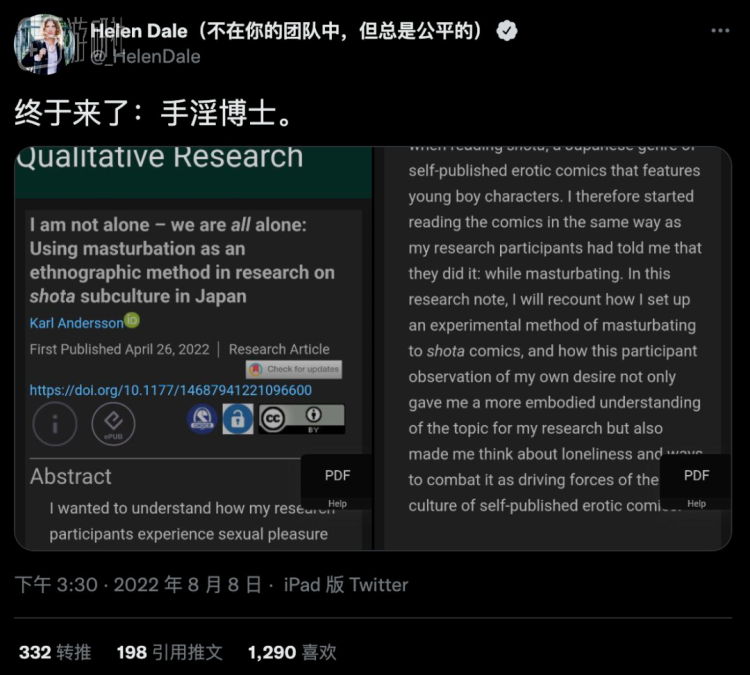 So much so that a congressman took the lead in angering the paper: 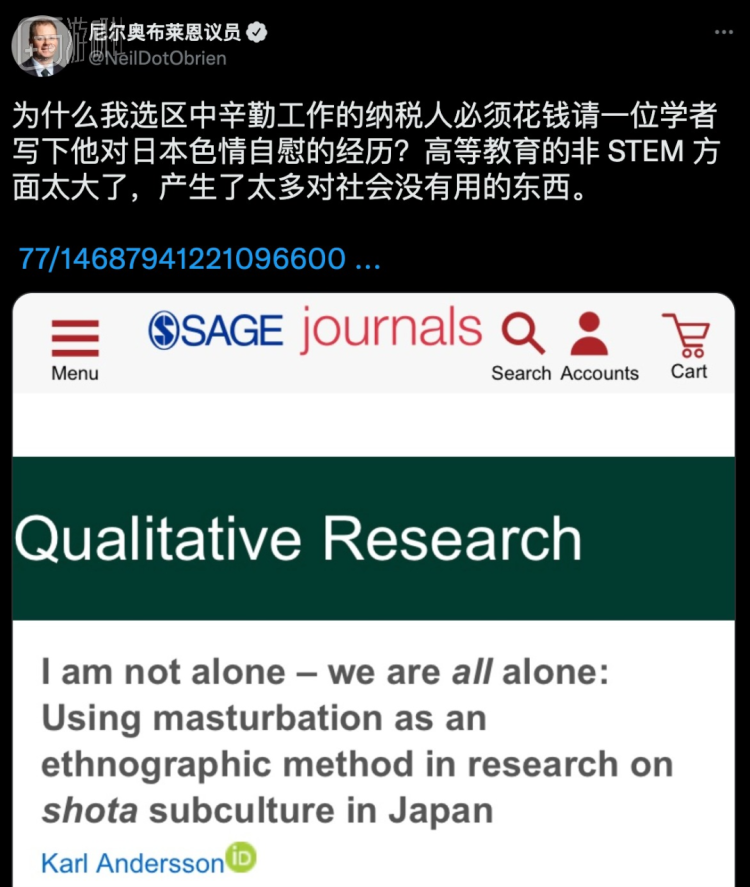 After ordinary netizens expressed their dissatisfaction, more researchers in the academic circle pointed out more unreasonable aspects of the matter.

For example, why would the journal Targeted Research allow such a paper to be reviewed? Why the author Anderson’s “research” at Manchester University did not prevent him from…

There is a growing realization that the most terrifying thing is not the outrageous content in this paper. Rather, “a journal agreed to publish such a paper” and no other academics questioned it for months.

These signs seem to indicate that today’s European and American academic circles are facing some deep-rooted problems.

In the end, under the pressure of public opinion, the “Directed Research” journal that published the “Shita Shichong” paper quickly issued an apology, saying that it had withdrawn the publication, “because the publication of this work has caused social harm”. 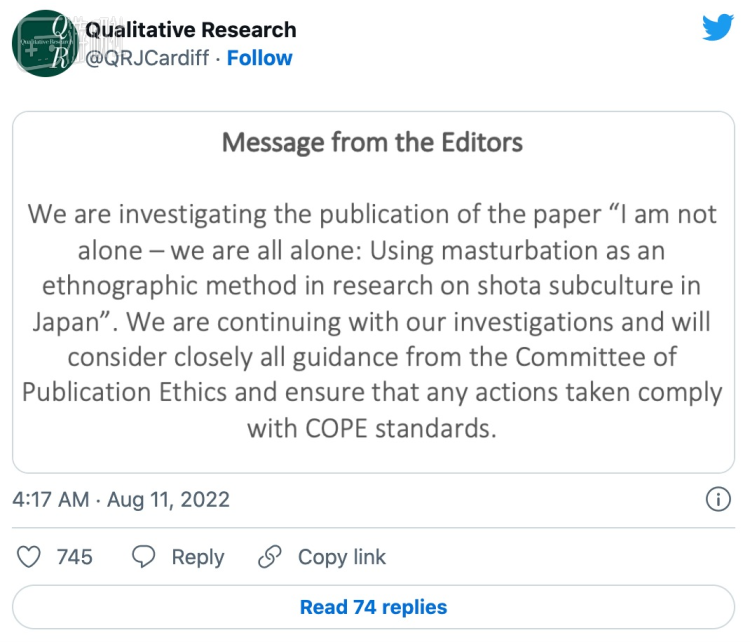 A spokesman for the University of Manchester also revealed information to the outside world, saying that the matter had “caused attention and concern” and that an investigation into the hand-punching doctor was under way.

So far, Dr. Anderson has not responded to this, but the ending of the whole thing has basically been set.

But at the same time, some people have started new discussions, such as “Can hand flushing be used as a research method?”

People’s opinions on this are relatively consistent: Yes, but you can’t look at children when rushing.

This article is reproduced from: https://www.yystv.cn/p/9661
This site is for inclusion only, and the copyright belongs to the original author.