Today, let’s talk about an American who is not very obedient. This kind of person is called trouble maker in the United States, and is commonly known as thorn head in China, causing headaches to all kinds of people around. And, his thorn head behavior throughout his life. His name is Fred, transliterated Fred.

Fred was born in Oakland, California in the year of the May 4th Movement in China. He lives an ordinary life. When he is in school, he learns various things, and plays ball and camps with his friends. When he is not in school, he helps to take care of the family business. By the time he was twenty-two, he took a job as a welder and had a girlfriend. He had saved enough money to buy a Pontiac, which he often drove with his girlfriend to the top of the park to watch the sunset. He looks forward to marrying her one day. However, in this ordinary life, there are also undercurrents surging. For example, he once wanted to go to the barber shop for a haircut, but was rejected by the barber; he wanted to join the army, but was rejected; his girlfriend’s parents also refused to accept him. Because he looks different from others.

One day, the government department asked him and his family to go to a place to report. The rest of his family went, but he didn’t. He continued to drive his car and take his girlfriend to the park to watch the sunset. But less than a month later, a policeman stopped him one day. After questioning, the police arrested him and put him in jail. Since then, he has never seen his girlfriend again.

The attentive reader may have realized that Fred is Japanese-American, and his full name is Fred Korematsu (Matsutoyo Saburo). Racial hatred against Japanese Americans rose after Pearl Harbor. Two months later, Roosevelt signed Executive Order 9066, authorizing the War Department to implement “theater control.” After nearly three months, DeWitt, the then commander of the “Western Theater”, ordered all Japanese in the area to report to the designated place at the designated time. That’s the order Fred and his family received. Fred’s disobedient stinging behavior was not tolerated, so he was arrested.

After a period of time in prison, he was approached by a man named Ernest Besig, a lawyer, to represent Fred’s case. Fred said, “But I don’t have the money, so I can’t afford a lawyer.” Ernest said, “I’d like to represent your case for free. All I need is your consent.” Fred agreed. Ernest even helped him pay bail, but by the time Fred stepped out of the prison door, others were already waiting for him. He was taken to Tanforan by these people to be reunited with his family.

Tanforan is located not far west of today’s San Francisco International Airport. Today it is a large shopping mall. At that time, it was a horse farm. It was temporarily requisitioned by the US military to house Japanese from nearby. The Fred family slept in the original stable, and the enclosed space still smelled of horse manure. He later said that the conditions here were much worse than the prison. But it wasn’t the living conditions that made Fred more upset: Family members and others who were detained here opposed his actions after hearing about his lawsuit against the government, arguing that he would make things worse for all Japanese. Here, the consensus is that in order to show loyalty to the US government, everyone should submit to the contrary in exchange for the government’s trust. And Fred said that he would continue to fight the lawsuit, so in the eyes of other Japanese people, he was also a thorn in the head. Although he lived with many companions, he was very lonely.

Fred and Ernest insist on fighting their case. They keep losing, keep appealing, all the way up to the Supreme Court. In March 1944, the Supreme Court agreed to hear their case. In December of the same year, Fred received a letter from Ernest saying they had lost the case. In a 6-3 vote, the Supreme Court ruled that General DeWitt’s imprisonment of Japanese Americans was “military necessary” and legal. At that time, the control of Japanese Americans had been relaxed in the United States, and Fred had obtained personal freedom, but for Fred, he lost his home, property, friends, love, and attachment to some beliefs. Since then, he has been silent, and he has restrained his behavior for decades.

The war was over, Fred got married, returned to his hometown of Oakland with his wife, and had children. He couldn’t work in white-collar jobs because of his criminal record, so he worked two manual jobs to earn money to support his family. He keeps silent about his accusations against the U.S. government. When his daughter Karen was sixteen, she was in the classroom with Korematsu v. United States, when Fred told the children for the first time that it was his case and told the children They, he still believes he is right. However, to the outside world, Fred remained silent.

Another sixteen years passed. One day in 1982, a man named Peter Irons called him, he said, about Fred’s case, found new evidence, and hoped to meet Fred. Fred agreed. It turned out that Peter had found documents in the National Archives that had been in the dust for many years, and the documents showed that during the course of the lawsuit in the case of Shisong v. the United States, lawyers representing the US government had discovered that General DeWitt’s report was lying, and there was no evidence that Japanese-American People were engaged in spying or sabotage to assist the Japanese military, but they hid these facts from the Supreme Court. Peter said that meant Fred could ask for a reopening of his case, even though it had already been ruled against Fred by the Supreme Court in 1944.

At this point, Fred asked Peter, “Are you a lawyer?”

“Then will you be my lawyer?”

Fred stood up again, and he and his team of lawyers stepped back into court. Even at this time, his actions were still fraught with risk. At the time, many Japanese-Americans were mobilizing social movements to push the U.S. government to apologize and compensate for the internment of Japanese-Americans during World War II, activities that could be hurt if Fred loses his case again. However, if Fred wins the case, he will not only be able to justify his own name, but also prevent the US government from making similar injustices against a certain ethnic group based on race in the future.

On November 10, 1983, Fred appeared in federal court in San Francisco. In court, Fred made this statement:

Your Honor, I still remember forty years ago when I was handcuffed and arrested as a criminal.

We can never forget this incident as long as we live. The horse stalls that we stayed in were made for horses, not human beings. living.)

As long as my record stands in federal court, any American citizen can be held in prison or concentration camp without a trial or hearing. That is, if they look like the enemy of this country. (As long as my “criminal record” remains A federal court has ruled that any U.S. citizen can be thrown into prison or concentration camp without trial if they look like an enemy of the country.)

Therefore, I would like to see the government admit that they were wrong and do something about it so this will never happen again to any American citizen of any race, creed, or color. be wrong, and do something to ensure that the same thing does not happen to any U.S. citizen in the future, regardless of their race and color.)

If anyone should do any pardoning, I should be the one pardoning the government for what they did to the Japanese-American people. do.)

After Fred finishes speaking, the judge (Marilyn Hall Patel) begins to speak some obscure legal language. Fred didn’t understand, so he asked his lawyers “what happened” and the lawyers told him: “Fred, you won, you won your case!” After a moment of calm he said, “Fine, that’s really good. Good.” After a lapse of 41 years, the judge ruled that Fred’s disobedience was not a crime, restoring Fred’s reputation. 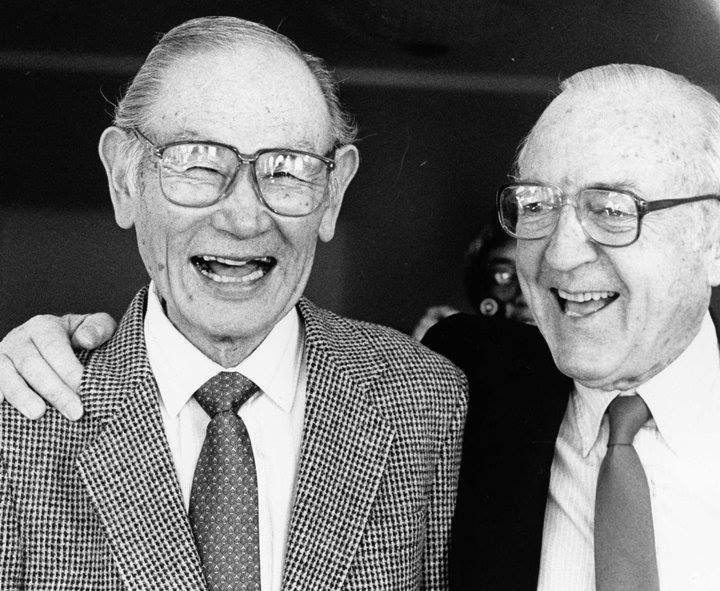 Fred in his teenage years with Ernest, who first helped him, in 1989. At that time, Ernest’s actions to help Fred were also thorny. He was opposed by his own agency, the ACLU, but he insisted on his opinion. Image courtesy of ACLU.

Fred, at this point in his advanced years, has since become more active in related causes, and he hopes that the government will no longer treat any group unfairly (as it did with Japanese during World War II), but he knows that the same things can still happen. Because, his victory was incomplete, Judge Patel’s decision cleared him, but her decision did not overturn the 1944 Supreme Court decision (it wasn’t until 2018 that Supreme Court Justice Roberts stated that the 1944 decision was wrong judgment). So he ran around, telling the injustice he had been treated, and his acts of resistance, to wake up the world. After the 9/11 terrorist attacks, many Americans were hostile to Middle Eastern immigrants and citizens. Fred once again said: “No one should ever be locked away simply because they share the same race, ethnicity, or religion as a spy or terrorist.” ( Just because a person and spies and terrorists are from the same race and believe in the same religion, they cannot be locked up). He continued to fight for the rights of others until the end of his life, March 30, 2005.

Today, many parts of the United States honor Fred and continue his career. The states of California and Virginia designated January 30 (Fred’s birthday) as Fred Korematsu Day, and his descendants established the Korematsu Institute, a 501(c)(3) non-profit organization .

This article is reprinted from: https://leonson.me/2022/04/a-trouble-maker
This site is for inclusion only, and the copyright belongs to the original author.