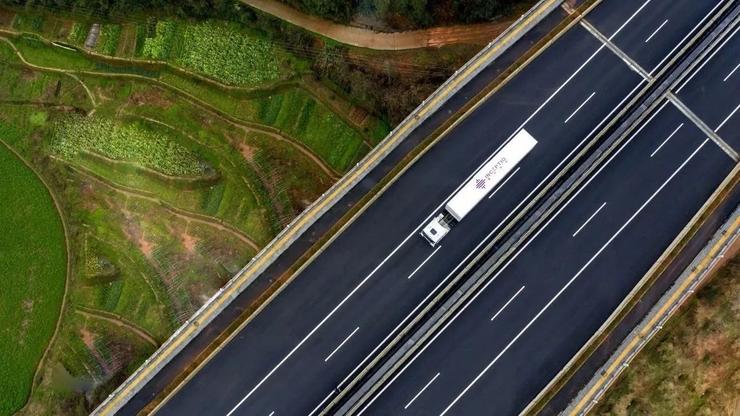 Wincher Technology has made the slogan “mass production of self-driving trucks” a reality.

At the beginning of this year, more than 100 L3-class smart heavy trucks were put into commercial operation. Now half a year has passed, the commercial mileage of Wincher Technology’s self-driving trucks has rapidly exceeded 6 million kilometers, and the unmanned road test of a full-length 24kmL4 -class heavy-duty truck has been completed. Driving trucks is about to go unmanned.

Since its establishment, Wincher Technology has insisted on full-stack self-research, and continued to make efforts from the three levels of judgment, perception and decision-making in autonomous driving technology.

In March 2021, Wincher Technology released the full-stack self-developed Xuanyuan autonomous driving system, which is oriented to the actual needs of heavy truck driving, simulates human drivers to the greatest extent, and upgraded its core algorithm and software architecture. Production vehicles.

After three years of operation, Xuanyuan Autonomous Driving System has been continuously iterating on data and technology in actual operation. Now the full-stack self-developed technology has entered the 2.0 stage, and has undergone comprehensive innovations from the aspects of algorithm, platform, vehicle and data. 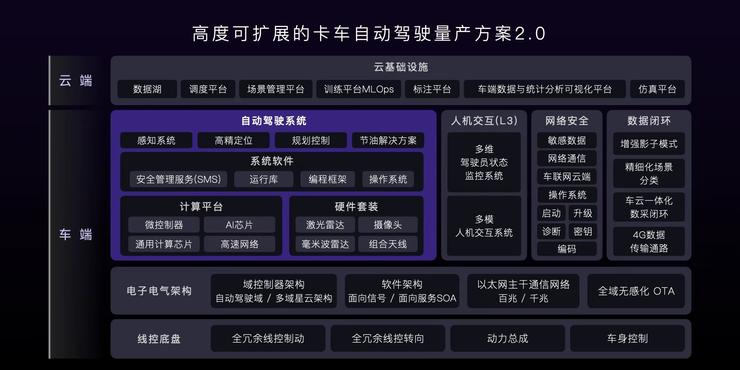 Heavy trucks have the natural attributes of long body and large cargo weight. They require longer reaction time and buffer distance when turning and braking. It can be seen in heavy truck accidents that a large part of the reason is due to the untimely response of the vehicle.

The Xuanyuan Autonomous Driving System 2.0 era adopts the multi-mode and multi-view Transformer’s pre-fusion perception framework. Through the fusion algorithm, it can quickly perceive small objects and special-shaped vehicles at a distance, and can accelerate the algorithm calculation to assist the vehicle to respond faster and more accurately.

The truck field has long had the problem of high fuel consumption, which has driven up the operating costs of the entire truck field.

Inceptio comprehensively optimizes fuel consumption from the algorithm level, and uses historical experience data and real-time traffic data to achieve optimal speed recommendations. In actual operation, the average fuel saving is 2-5%, and it can even reach the upper limit of 7% fuel saving.

The update of the product needs to rely on the iterative optimization of the data. It can be said that the data closed-loop capability is the vitality of the product.

With the accelerated pace of large-scale production and operation, and the rapid increase in autonomous driving mileage, Inceptio has established the industry’s first closed-loop data system for autonomous trucks, turning data assets into technological advantages.

At present, Yingche Xuanyuan Autonomous Driving System 2.0 has stepped out of the laboratory stage and has begun to plan mass production. 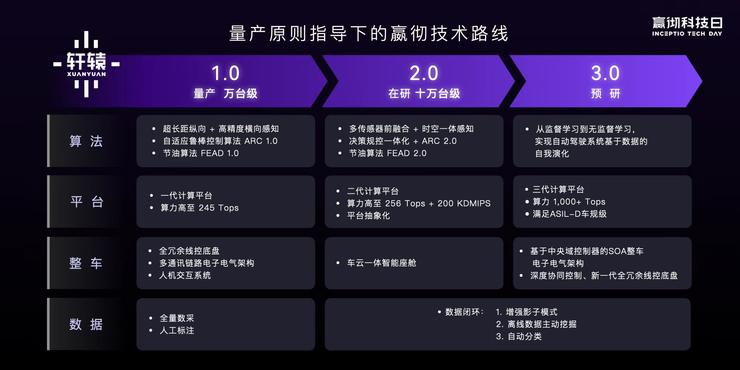 From L3 to Unmanned

In 2018, Yingche Technology, which was late on the autonomous driving track, showed great development potential and delivered the market results of mass production of autonomous trucks within three years.

At the beginning of its establishment, Wincher Technology clearly put forward: to be a vehicle-grade, safe and mass-produced autonomous driving. At the technical conference, Huang Gang, executive vice president of Wincher Technology, repeatedly emphasized that self-driving trucks must put safety first.

In order to achieve this goal, Wincher Technology has embarked on its own path in the field of trunk logistics.

Unlike most companies in the market that directly choose the L4-level path, Wincher Technology insists on a progressive route, first making L3-level autonomous trucks, and then slowly transitioning to L4.

From a safety point of view, Wincher Technology believes that L3 cannot be avoided when making self-driving trucks.

Most of the players on the L4 route pursue the realization of “completely unmanned” main driving, but in terms of the previous situation, there are still many challenges.

On the one hand, there is still no breakthrough in the L4 technical bottleneck, and it is difficult to achieve mass production in a short period of time. On the other hand, “completely unmanned” self-driving trucks are still unable to operate normally on public roads in China.

Commercial mass production of self-driving trucks is not only a battle of technology, but also a battle of cost and speed.

The L3 level is still a relatively controversial route. The Ministry of Industry and Information Technology defines L3 as “automation under limited conditions”, that is, under the operating conditions specified by the automatic driving system, the vehicle itself can complete the steering, acceleration and deceleration, and The task of detecting and reacting to road conditions is taken over by the driver in certain situations.

In other words, in the L3-level autonomous driving state, the driver can not only “take off his hands” and “take off his feet”, but also “take off his eyes”, that is, he does not need to supervise the vehicle at all times, but only needs to maintain the ability to dynamically take over the driving task.

Wincher Technology combines L3 technology with trucks. During the driving process, the driver becomes a safety officer and assists the system to drive. After reducing the driving workload, the dual-driver rotation mode becomes a single driver.

In this mode, it not only relieves the driver’s fatigue, reduces accidents, but also reduces labor costs.

At present, autonomous driving companies that take the L4 technology route use hardware “overweight” to cope with the higher technical requirements of autonomous trucks. In this case, the cost will increase greatly.

This is obviously difficult to meet the demand for cost reduction and efficiency improvement in the field of trunk logistics.

The L3 level achieves the same performance at a lower cost through the improvement of computing power, reduces the push of hardware, and is more advantageous in cost.

However, with the continuous evolution and upgrading of technology, autonomous driving will eventually move to the stage of “completely unmanned” main driving.

This stage is accelerating.

Today, the self-driving truck technology of Wincher Technology has entered the 2.0 era, and it is just around the corner to realize the “main driver and no one”.

More importantly, this work has been put into practice, and the self-driving truck of Wincher Technology has completed the unmanned road test of a full-length 24kmL class 4 heavy truck.

Entering the era of mass production

In recent years, the development of the autonomous driving industry has continued to grow.

While the development of the Robotaxi field ushered in phased results, players began to quickly look for the next subdivision track.

The field of trunk logistics has become a new blue ocean targeted by autonomous driving players.

Logistics is a pillar industry of my country’s economy and has a huge market scale. According to the analysis of the current market size of China’s logistics industry in 2021, my country’s logistics scale will exceed 300 trillion in 2020, and it will show a trend of increasing year by year.

In addition, the logistics industry has prominent pain points and high labor costs. It is understood that labor costs account for about 25% to 35% of the cost per kilometer; accidents caused by drivers’ fatigue driving are frequent; compared with passenger cars, heavy trucks consume more fuel per day. .

The logistics industry seeks to reduce costs and increase efficiency, and autonomous driving technology has become a sustenance carrier.

Compared with the passenger car field, the trunk logistics track scene is relatively closed, and the landing difficulty is small. With the boost of capital and the competition of players, intelligent driving trucks ushered in a brutal growth period. New players such as Pony Smart Card under Pony.ai, DeepWay under Baidu, Qianhang Technology, Xingang Technology, etc. continue to pour in, and financing news continues.

But the smart-driving truck track is still young.

On the one hand, intelligent driving trucks have not yet opened up the supply chain of commercial operation, and the nature of intercity transportation of trunk logistics is restricted by policies in actual operation. On the other hand, most players start to compete in technology, and achieve higher-level technology by stacking hardware and computing power.

On the other hand, mainline logistics is a new scenario. The gameplay and game rules of the autonomous truck track are obviously very different from those in the passenger car field. Autonomous trucks face more challenges, which most autonomous driving companies have not achieved before. mass production.

As Ma Zheren, founder and CEO of Inceptio Technology, said, “The autonomous driving industry has entered a new stage, and the technology focus has shifted from algorithm software exploration to pre-installation mass production.”

This article is reproduced from: https://www.leiphone.com/category/transportation/nMxNvdEj1MFjbY0g.html
This site is for inclusion only, and the copyright belongs to the original author.