People who bought Dogecoin can now finally use it to buy movie tickets at theaters AMC.

In fact, AMC, the largest movie theater chain in the United States, has always publicly supported cryptocurrencies, and CEO Adam Aron recently announced that its app will now accept Dogecoin (DOGE), SHIB and other cryptocurrencies. 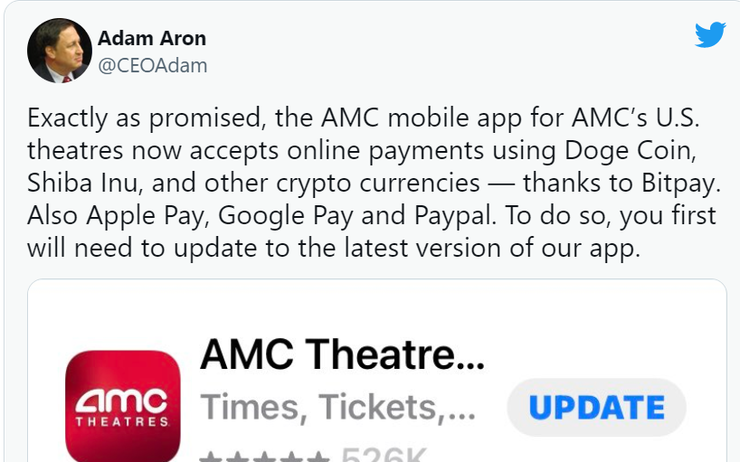 Adam Aron said that if customers in the US want to pay with cryptocurrencies, they can update the AMC Theatres app for iOS and Android through the integration with BitPay.

Dogecoin was accepted by AMC Theaters as early as October 2021, but only via digital gift cards (up to $200 per day).

AMC’s plan to accept cryptocurrencies was announced in August last year, but it was not until January 6, 2022 that Adam Aron promised users through social platforms that the company would accept Dogecoin, SHIB and other cryptocurrencies by March.

Following the announcement, a group of Dogecoin fans gathered on AMC’s social media, demanding that AMC also accept other cryptocurrencies. Aron then tweeted a poll asking if they would use Dogecoin to make purchases on AMC, with more than two-thirds voting in the affirmative.

And according to Aron, crypto payments account for 14 percent of all online transactions.

In most cases, paying for popcorn and tickets with Dogecoin is simple. After the user adds the AMC ticket to the shopping cart, and selects BitPay as the payment method, he only needs to connect the user’s encrypted wallet address, and then the user’s selected cryptocurrency can be sent there.

This article is reproduced from: https://www.leiphone.com/category/industrynews/gg3wqfGcAcXucBjN.html
This site is for inclusion only, and the copyright belongs to the original author.