When debugging network quality, we generally focus on two factors: latency and throughput (bandwidth). The delay is better to verify, you can see it by pinging or mtr . This article shares a way to debug throughput.

Scenarios that value throughput are generally so-called long fat networks (Long Fat Networks, LFN, rfc7323 ). For example, downloading large files. The throughput has not reached the upper limit of the network, which may be mainly affected by three aspects:

Bottlenecks on the sender side are generally easier to troubleshoot, and you can even see when they are blocked through the application log. Most of the cases are the 2nd and 3rd cases, which are more difficult to investigate. This happens when the application on the sending end has written the content into the system’s buffer, but the system does not send it out quickly.

How to find the value of this cwnd?

This is the key, the default algorithm is cubic, and there are other algorithms that can be used, such as Google’s BBR .

The main logic is, slow start (Slow start), send data to test, if the ack from the receiver can be received correctly, it means that the current network can accommodate this throughput, then cwnd x 2, and then continue the test. until one of the following happens:

Point 2 is easy to understand, indicating that network throughput is not a bottleneck, the bottleneck is that the buffer at the receiving end is not large enough. cwnd cannot exceed rwnd, otherwise it will overload the receiver.

However, the actual situation that causes point 1 is not necessarily the bottleneck of network throughput, but may be the following situations:

Causes 2 and 3 both cause cwnd to drop and network throughput cannot be fully utilized.

The above is the basic principle, the following describes how to locate this problem.

This window size is directly in the TCP header, and you can see this field when you grab it.

But the real window size needs to be multiplied by factor, which is negotiated at the TCP handshake node through TCP Options . So if you analyze the window size of a TCP connection, you must capture the packets in the handshake phase, otherwise you can’t know what the negotiated factor is. 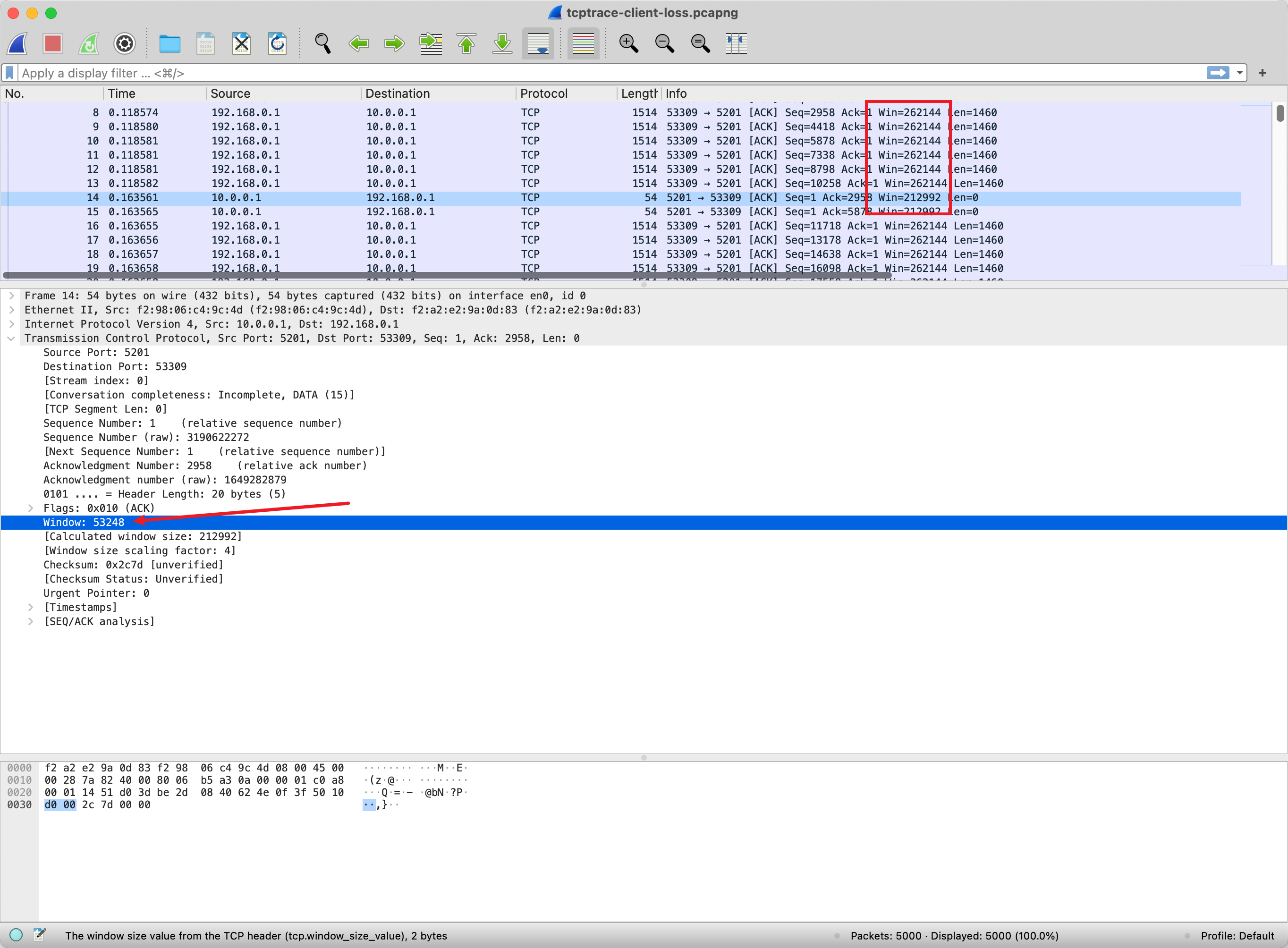 Congestion control is a dynamic variable obtained by the sender through the algorithm. It will try to adjust it, and it will not be reflected in the transmission data of the protocol. So to see this, it must be seen on the sending machine.

In Linux, you can use the ss -i option to print out the parameters of the TCP connection.

Wireshark provides very useful statistics that allow you to see at a glance where the current bottleneck is happening. But when I opened this picture for the first time, I couldn’t read it. Fortunately, my colleague met, he taught me, I will record it here, and teach you too.

First, open the way as follows: 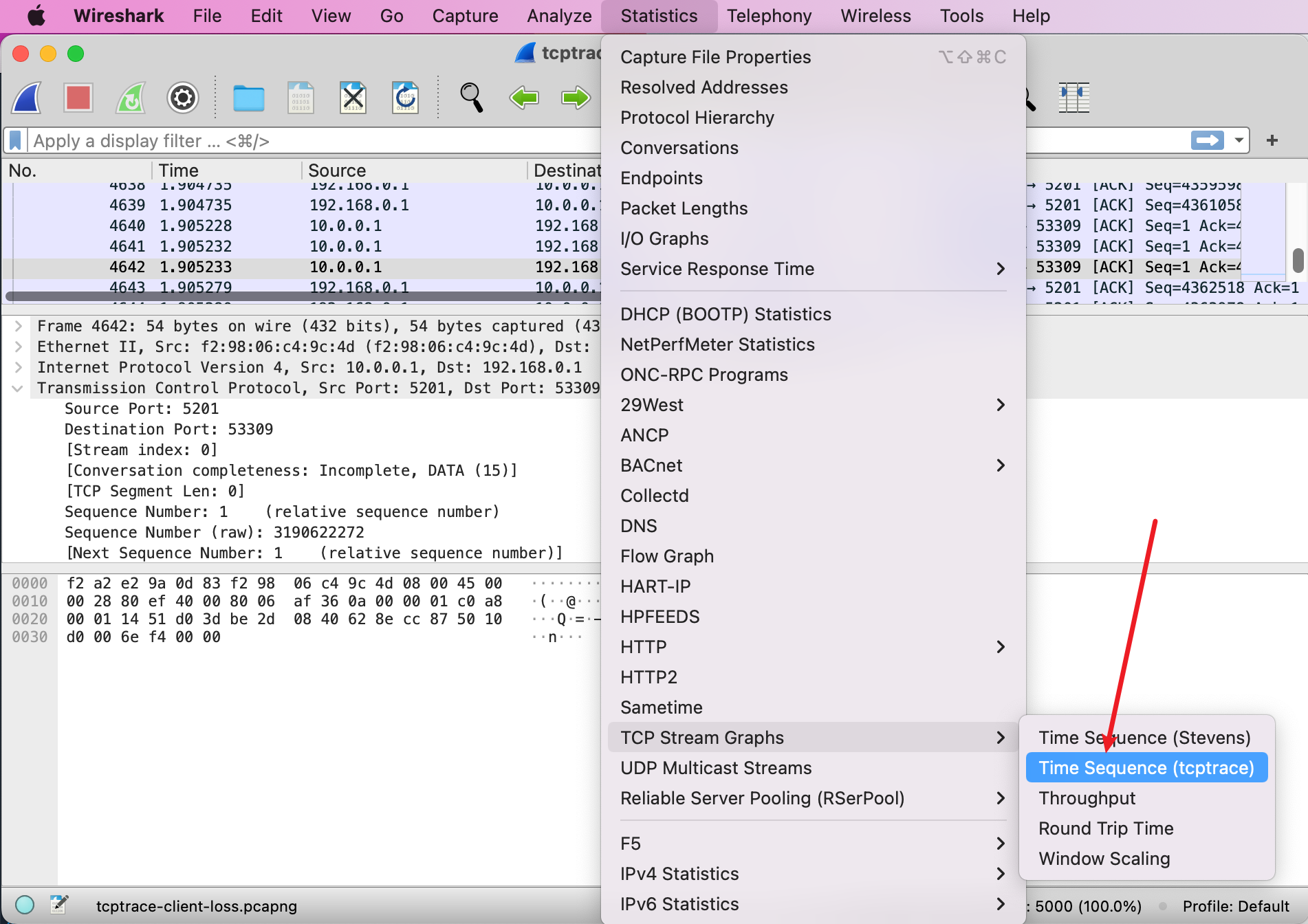 Then you will see the following image. 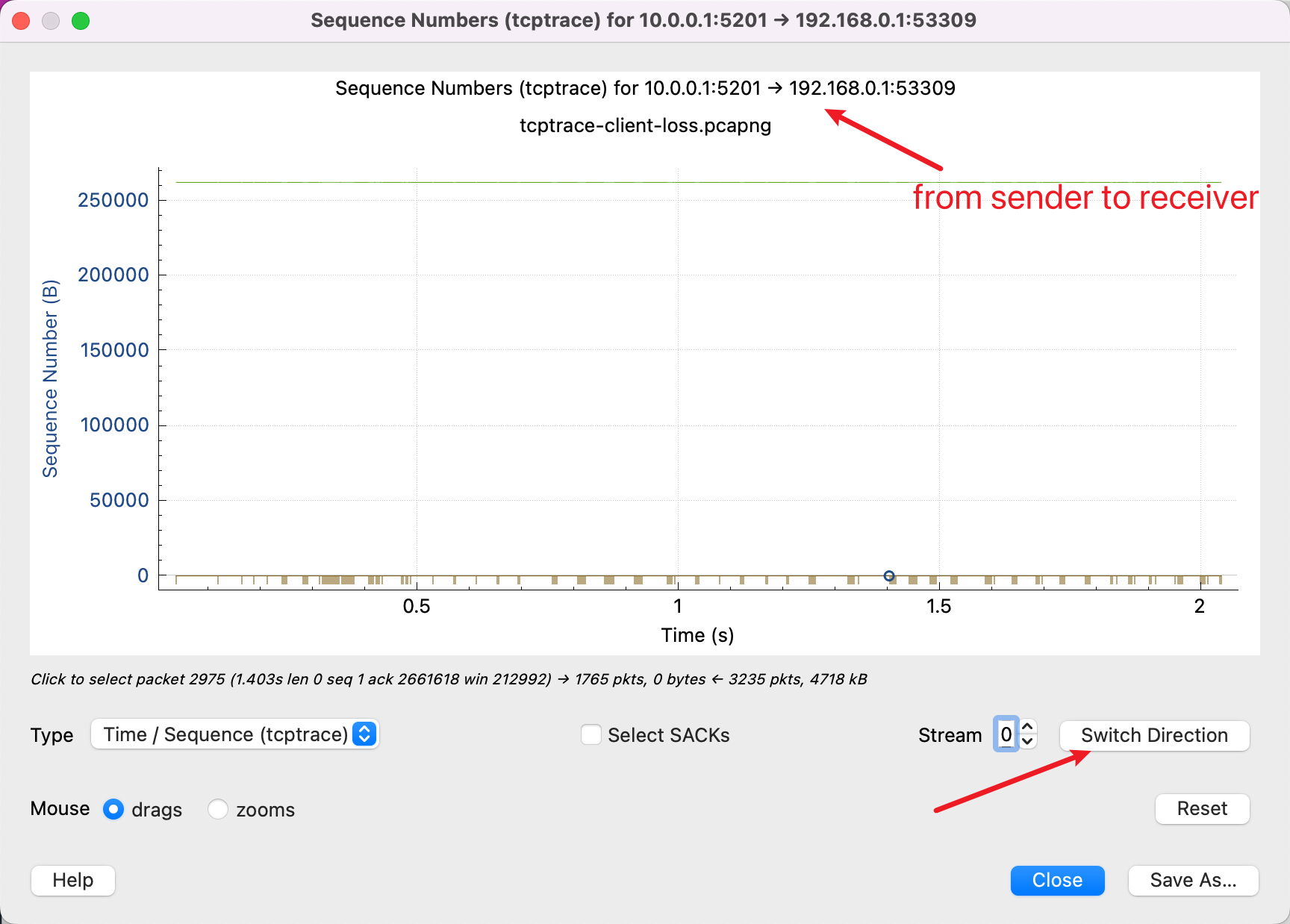 First of all, it needs to be clear that the diagram of tcptrace represents data transmission in one direction, because tcp is a duplex protocol, and data can be sent on both sides. The top of it says that the graph data you are looking at is sent from 10.0.0.1 to 192.168.0.1, and then press the button in the lower right corner to switch the viewing direction.

The X-axis represents time, which is easy to understand.

So, if you see as shown in the figure above, it means that you are reading it the other way round, because the Sequence Number of the data has not been increased, indicating that almost no data has been sent, and you need to click Switch Direction. 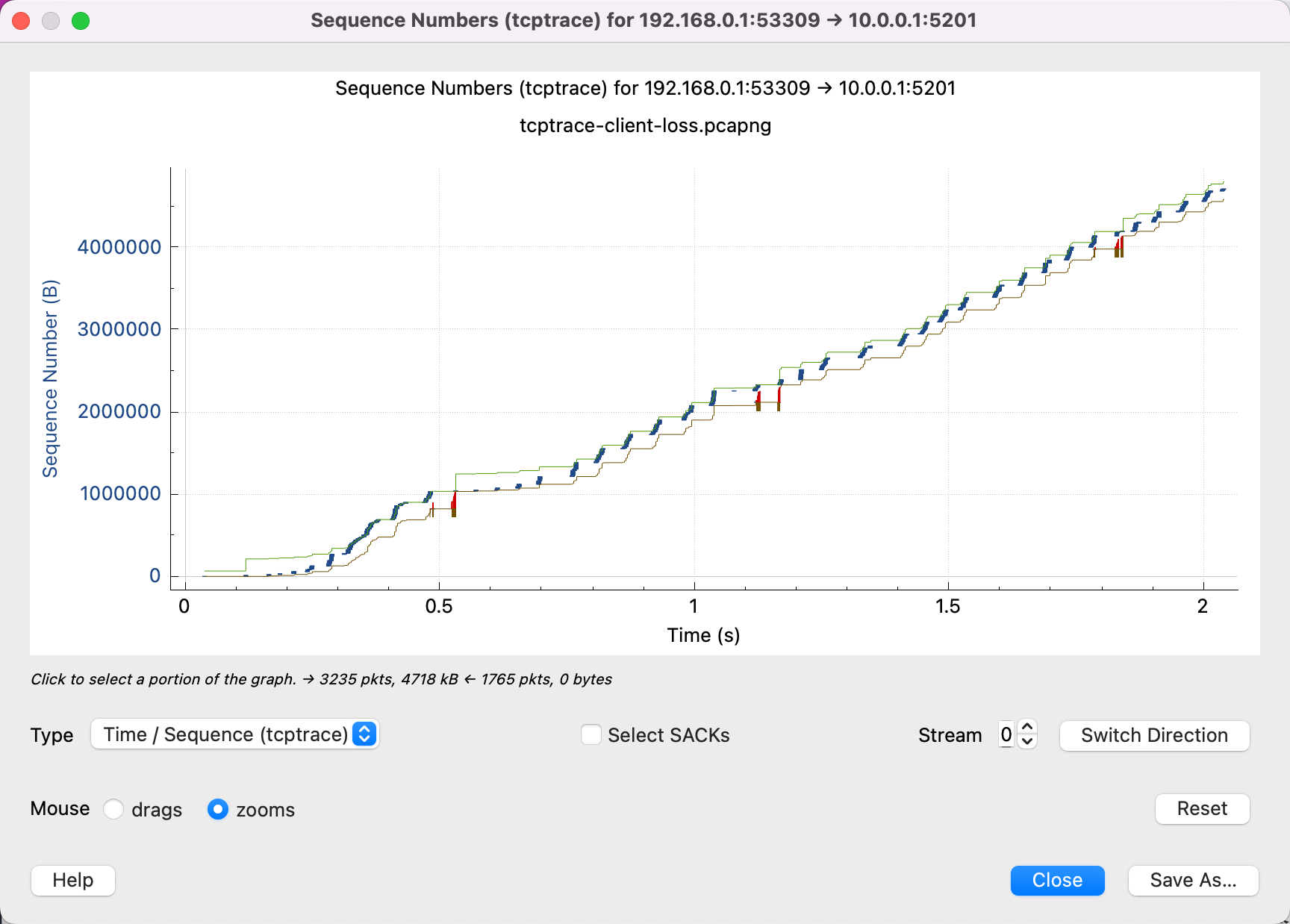 That’s right, you can see that the Sequence Number we transmit increases over time.

There are 3 lines in it, with the following meanings: 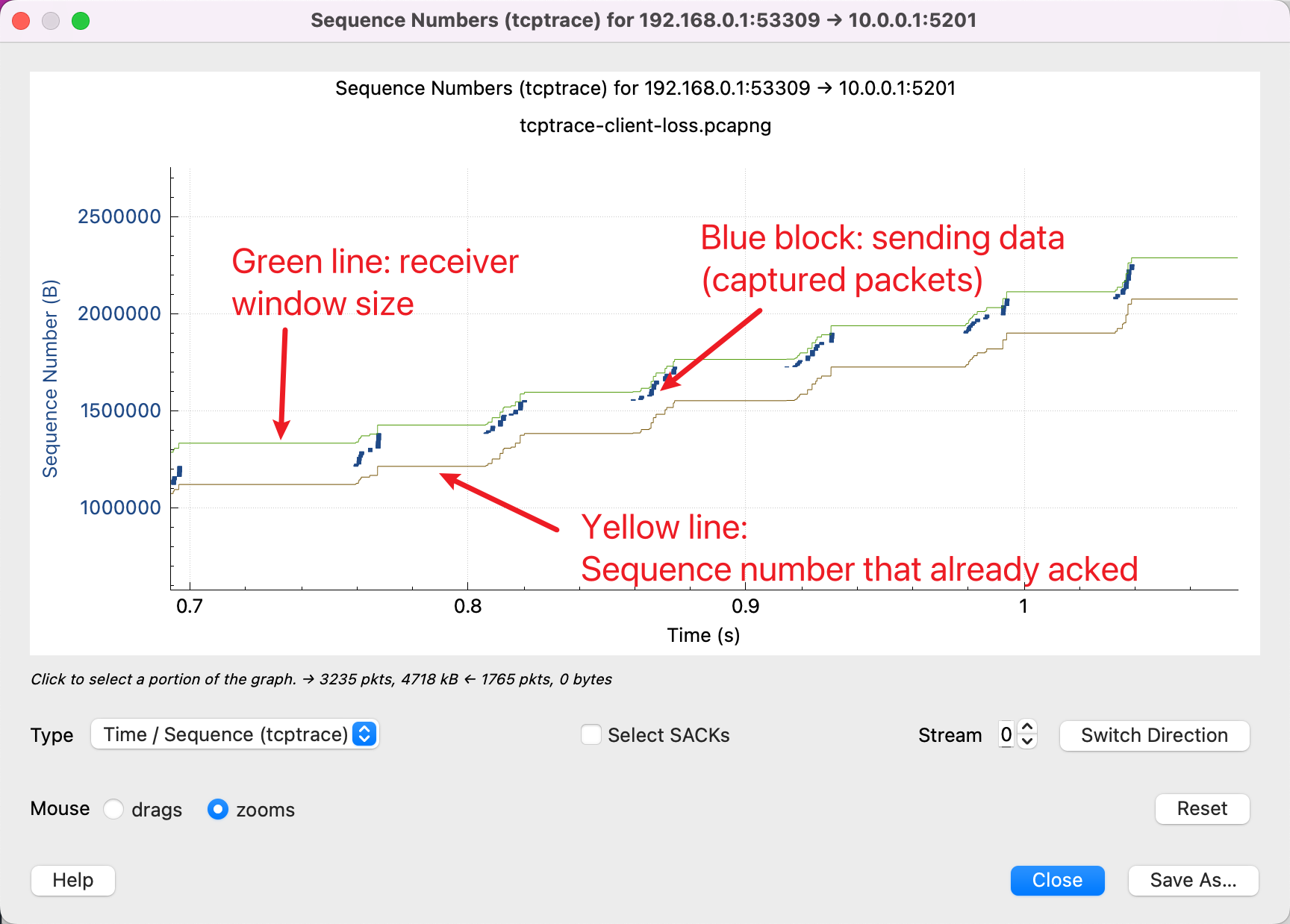 In addition to this, there are two other lines: 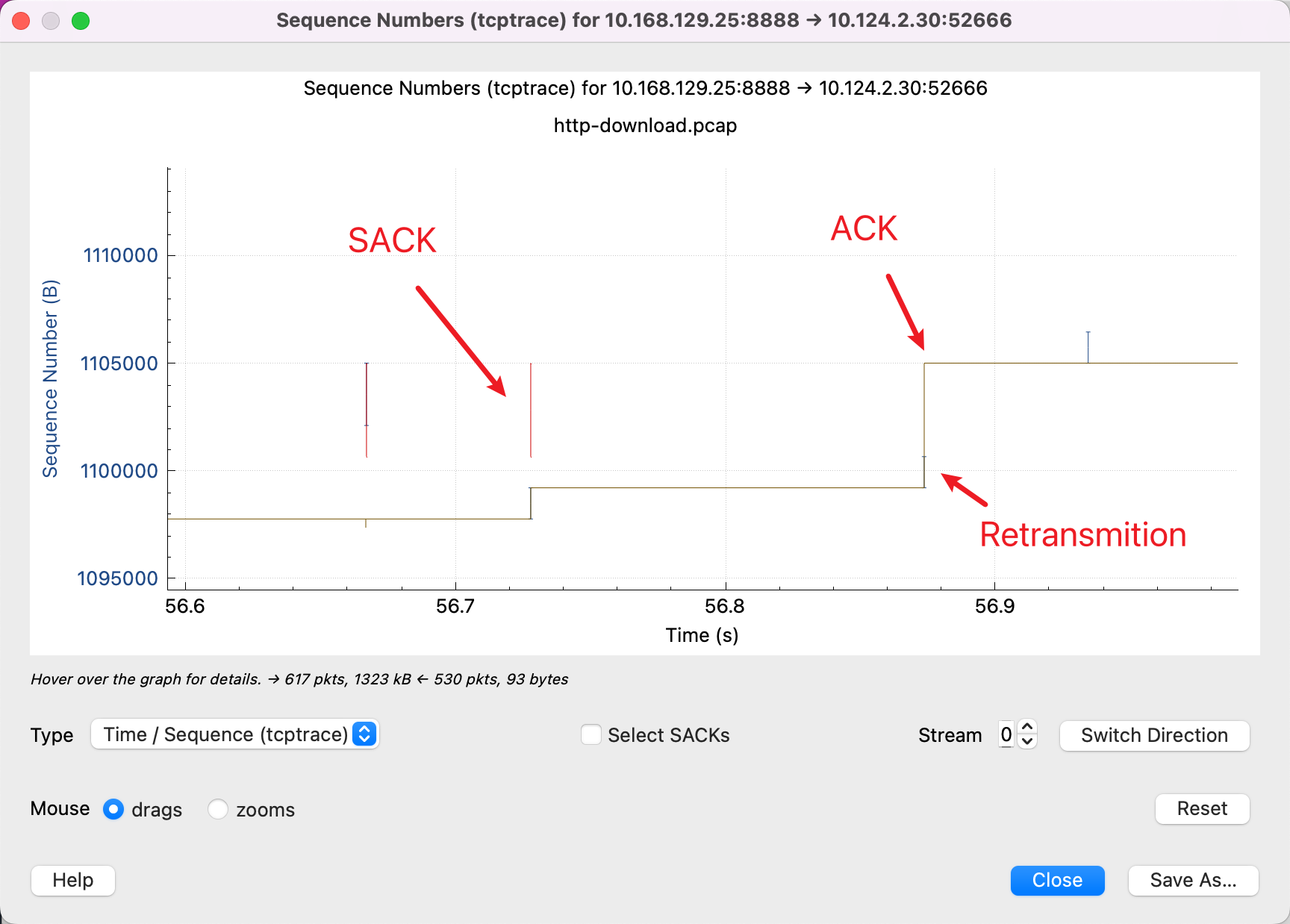 After learning to look at these pictures, we can recognize several common patterns: 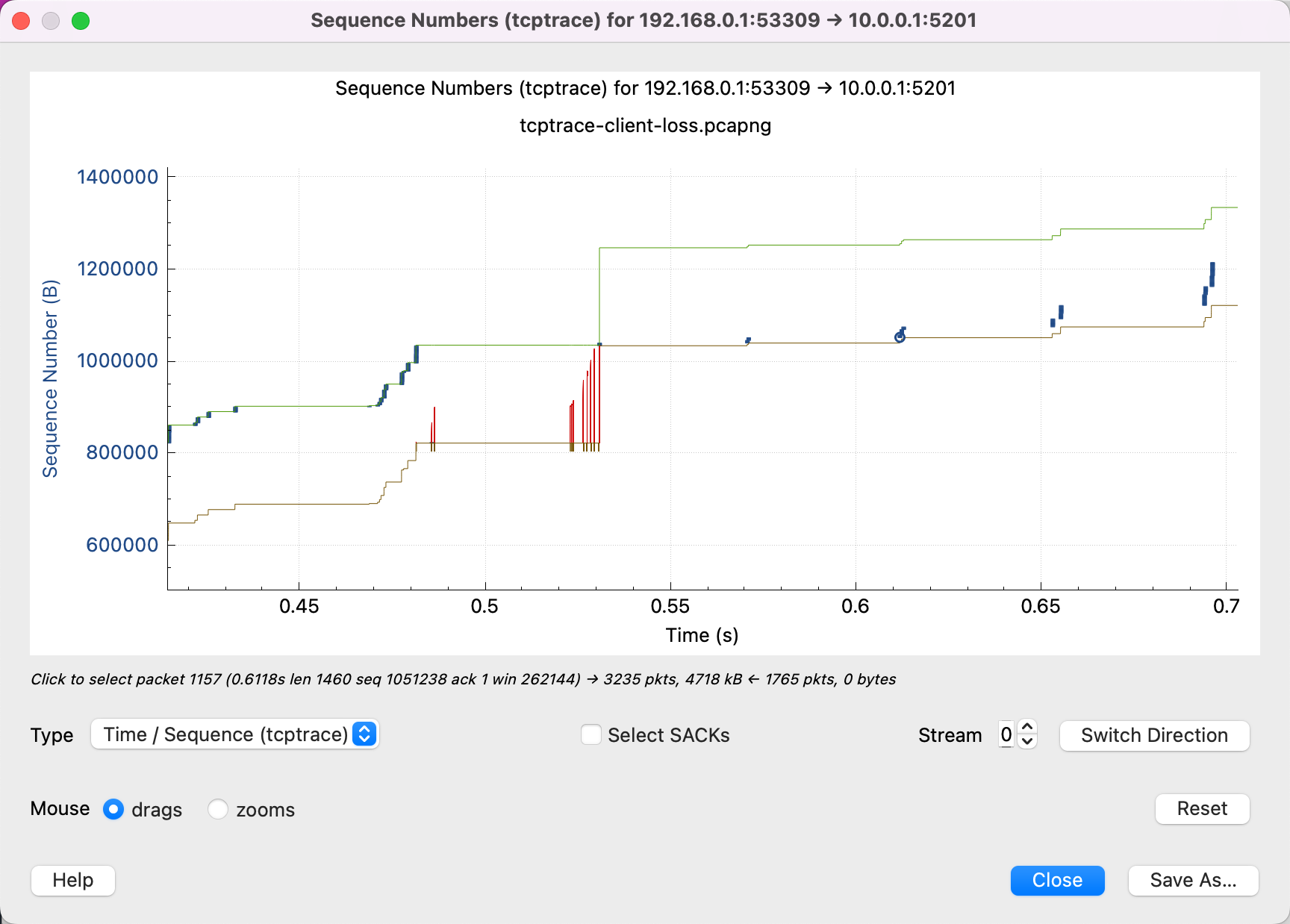 Throughput is limited by the receive window size 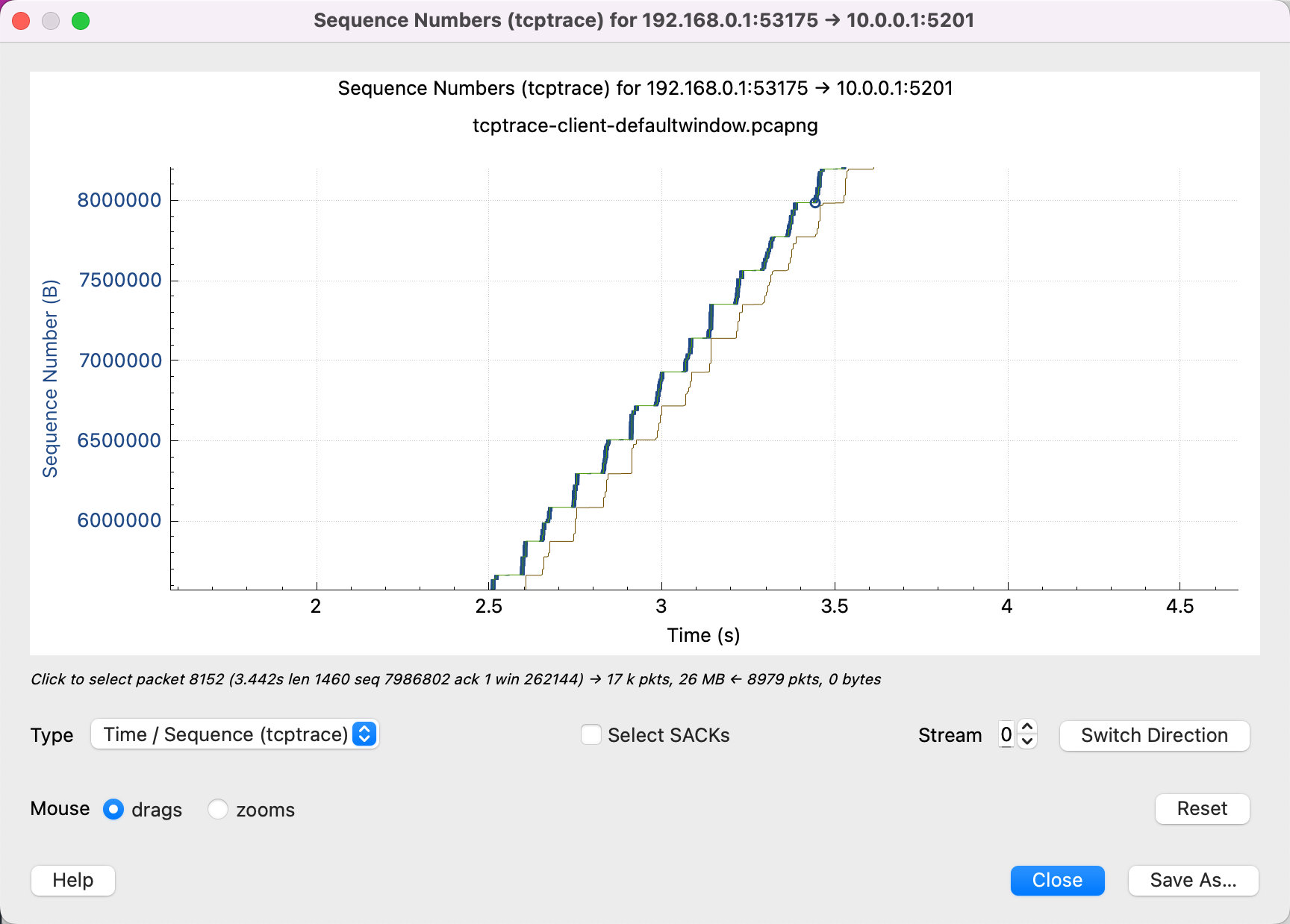 As can be seen from this figure, as soon as the yellow line (the receiving end ACK) rises, the blue line rises (the sending end starts sending) until the green line (window size) is filled. It means that the network is not the bottleneck, and the buffer size of the receiving end can be increased. 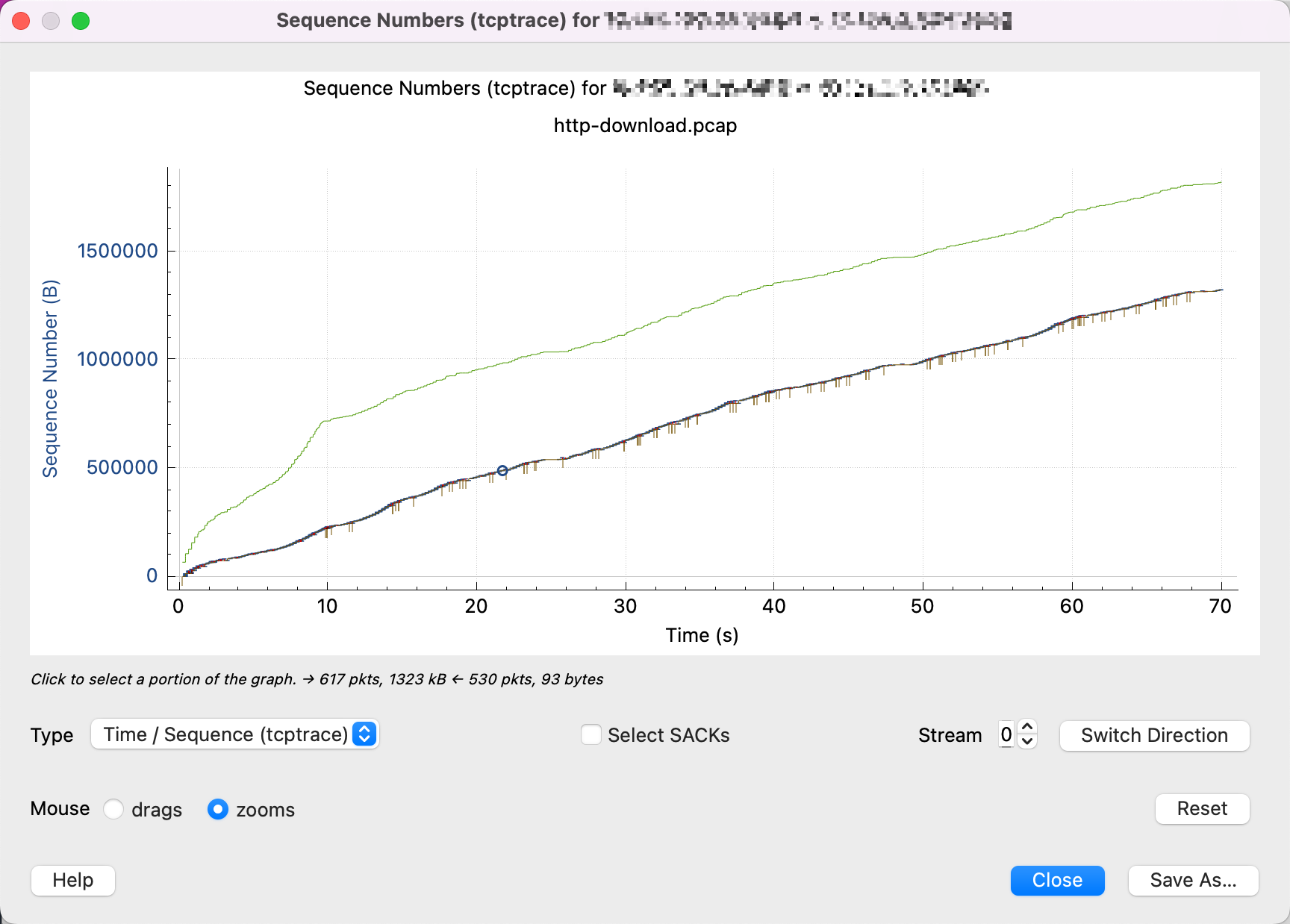 As can be seen from this figure, the window size of the receiving end is far from being the bottleneck, and there is still a lot of free time. 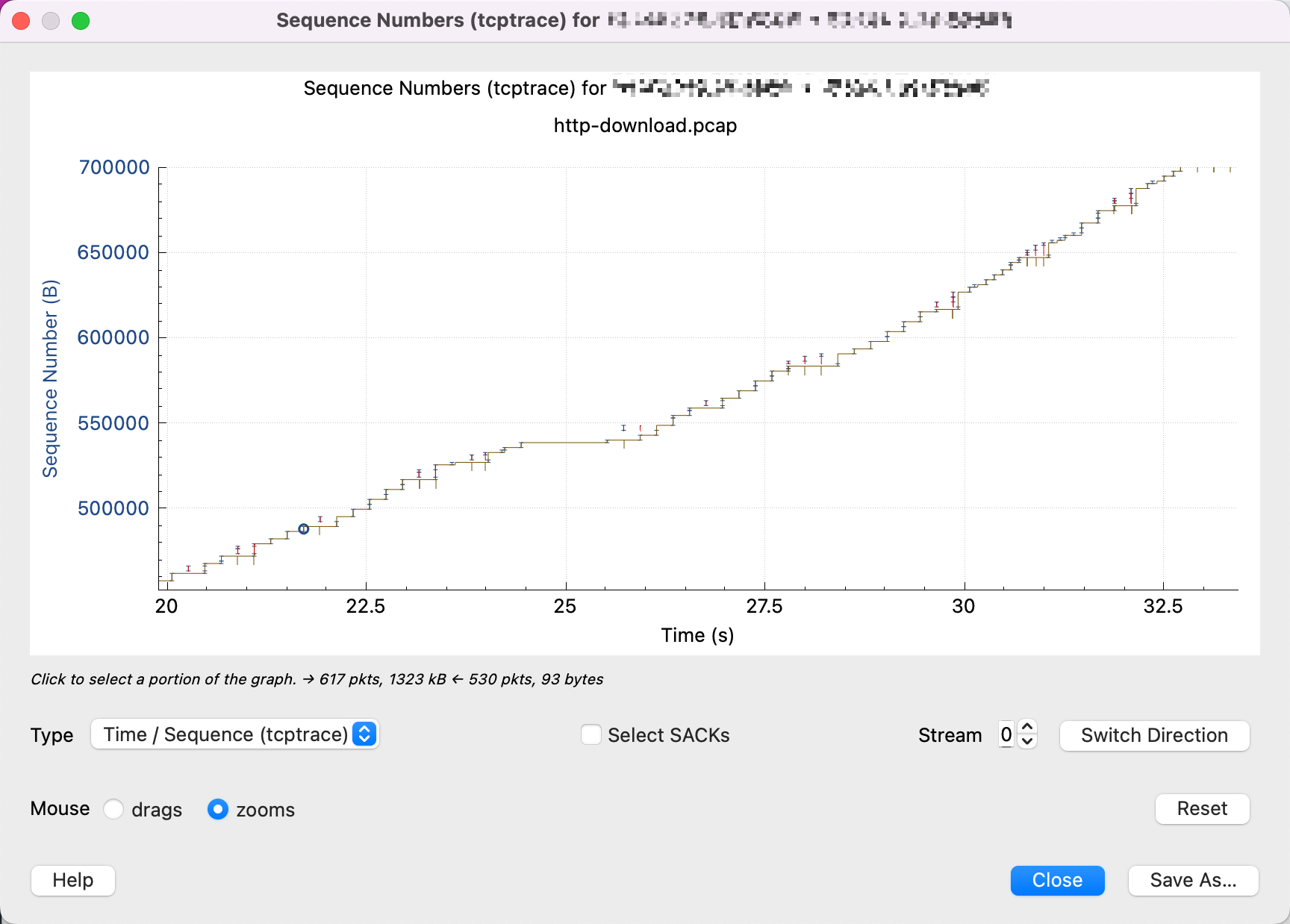 Zooming in, it can be seen that there are many packet losses and retransmissions in the middle, and only a little bit of data is sent each time, which indicates that the cwnd is probably too small and is limited by the congestion control algorithm.

The packet capture files used in this article can be downloaded from here (credit: https://www.youtube.com/watch?v=yUmACeSmT7o ):

This article is reprinted from: https://www.kawabangga.com/posts/4794
This site is for inclusion only, and the copyright belongs to the original author.