Organized by IEEE (Institute of Electrical and Electronics Engineers), CVPR is a world-class top conference in the field of computer vision and model recognition, a platform for displaying cutting-edge scientific and technological achievements and exploring academic applications. Ant Group has been deeply involved in computer vision for many years. As of 2022, it has participated in the formulation and release of more than 30 domestic and foreign standards in the field of computer vision, and published more than ten papers in CVPR this year. 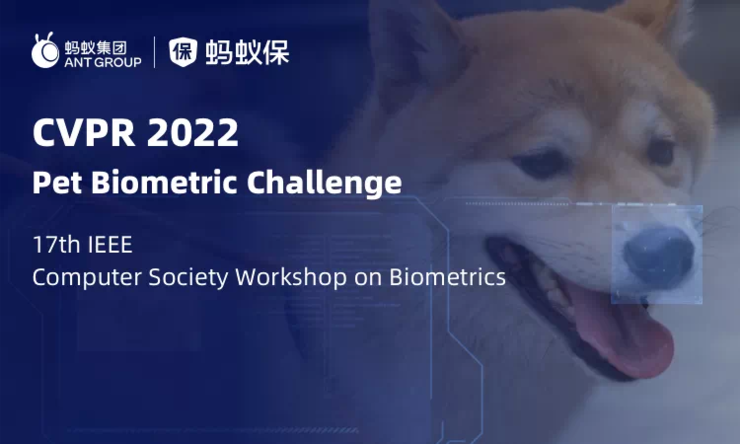 Both questions are topics that attract much attention in the current society. With the rapid growth of the pet economy, AI technology empowering the pet industry has gradually become a hot topic in the industry, and related technologies also have high application value in scenarios such as copyright protection and anti-fraud. As an industry leader in this field, Ant Group has previously formed a lot of technical application experience and applied for more than 20 related patents. This time, Ant teamed up with the Artificial Intelligence Innovation and Industry Research Institute of Fudan University to open its own samples, build a pet-related academic competition platform, and bring the pet nose print recognition competition question to CVPR for the first time. In the end, the teams from Huazhong University of Science and Technology, Shanghai University of Science and Technology and Nanjing University of Science and Technology won the top three with AUC of 0.9087 points (the closer the AUC is to 1.0, the higher the accuracy of the algorithm’s judgment), 0.8881 points and 0.8667 points.

Qi Yuan, a Haoqing Distinguished Professor of Fudan University and Dean of the Artificial Intelligence Innovation and Industry Research Institute, said that the original intention of this competition is to provide data and competition questions that are close to real scenarios for outstanding algorithm talents from universities and enterprises, so that everyone can participate in the competition. Compete and communicate on this platform to explore the possibility of cutting-edge technologies to solve real-world problems. The solutions of the winning teams of this pet nose print recognition competition have been open sourced.

Behind the image forgery detection technology is the deepfake problem that has been hotly debated by the society. The images synthesized after tampering are mostly used in illegal content and fake news to induce public opinion, which not only violates personal privacy, but also disturbs social order. Ant Group, together with Nanyang Technological University in Singapore and the Cloud University of China Academy of Information and Communications Technology, held an image tampering detection competition, aiming to promote the progress and development of detection technology. In the end, the teams from NetEase, ByteDance, and Meituan won the top three with AUC of 0.9938 points, 0.9913 points, and 0.9879 points, respectively.

Liu Shuo, deputy director of the Content Science and Technology Department of the China Academy of Information and Communications Technology, said that the digital age has come, and detection technology for counterfeit digital images and videos is becoming more and more important. This CVPR 2022 Image Tampering Detection Competition has inspired technological innovation and provided a useful reference for the application of technology in real scenarios. In the future, the “offense and defense” around forgery and identification will continue to exist. In addition to continuous technological innovation, it is also necessary to join forces such as “government, industry, academia, research and use” to jointly explore the governance practice paradigm for counterfeit content.

Ant Group has cooperated with universities in the field of artificial intelligence to develop basic technologies for many years, and established joint laboratories and other projects with Berkeley, Tsinghua University, Peking University, Chinese Academy of Sciences, Zhejiang University and other Chinese and foreign universities to jointly build an industry-university-research ecosystem. This time, Ant cooperated with domestic and foreign scientific research institutions to hold the “real scene-oriented” CVPR22 Workshop double competition, focusing on applying academic research to industry applications, facing real problems and challenges in business scenarios, and promoting the use of cutting-edge technologies to solve real problems through the combination of production and research. .

This article is reproduced from: https://www.leiphone.com/category/industrynews/XX0HVJqPVuwUvDcL.html
This site is for inclusion only, and the copyright belongs to the original author.