The “recording” thing is very powerful, it collects the small details outside the attention, and gives a real but unexpected perspective of life. For example, if it wasn’t for billing, I wouldn’t know that I would spend so many bits and pieces of “latte factor” every month; if it wasn’t for HiWater, I wouldn’t know that I was consuming so many sugar-sweetened beverages.

In fact, I purchased the App Store Editors’ Choice app WaterMinder a long time ago, but at that time I didn’t understand the meaning of the words “drink more water” to the body, and at the same time, I felt that recording drinking water was like a Bookkeeping – No external constraints, “recording how much is recorded by virtue of honesty” is only for self-entertainment. So often three days after the lack of interest delete things.

HiWater was recommended by my friend @Tren. After playing around, I thought it was pretty good, but I didn’t want to pay for this demand at the time. After I was diagnosed with gout not long ago, I left the clinic full of gloom and I just needed to “drink 3L+ of water every day”. That’s when I found out that every pay point of the app was worth my money.

As a domestic application, HiWater’s beverage catalog presets are more suitable for daily life, and the catalogue also prominently marks the kilocalorie per 100 ml. There is even a sense of blacklisting when scrolling down to high-calorie drinks. 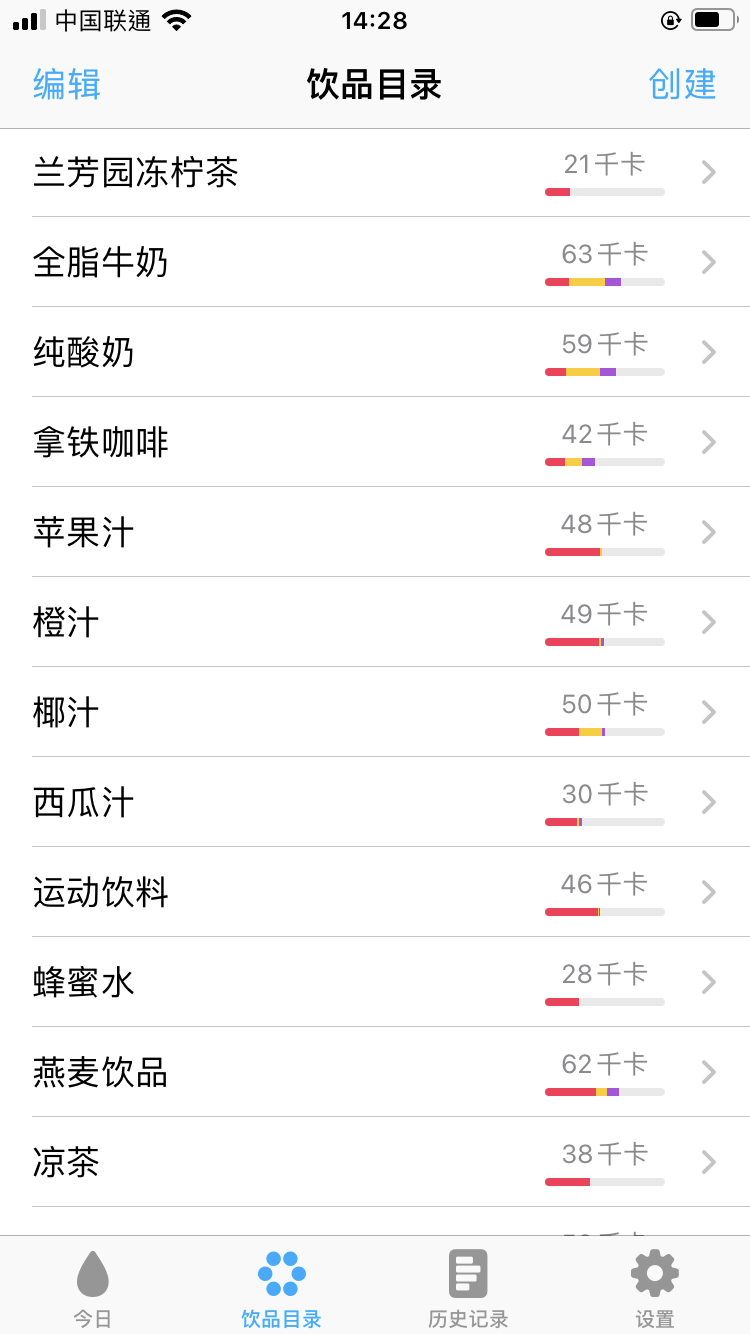 Part of the reason for this design is that HiWater uses a “drinking pyramid” model, which groups all drinks into six levels and recommends daily intake ratios accordingly. Although this model is endorsed by experts from the Harvard School of Public Health, the overall guiding ideology is still to encourage everyone to drink more water and reduce intake of high-sugar and even sugar-sweetened beverages. 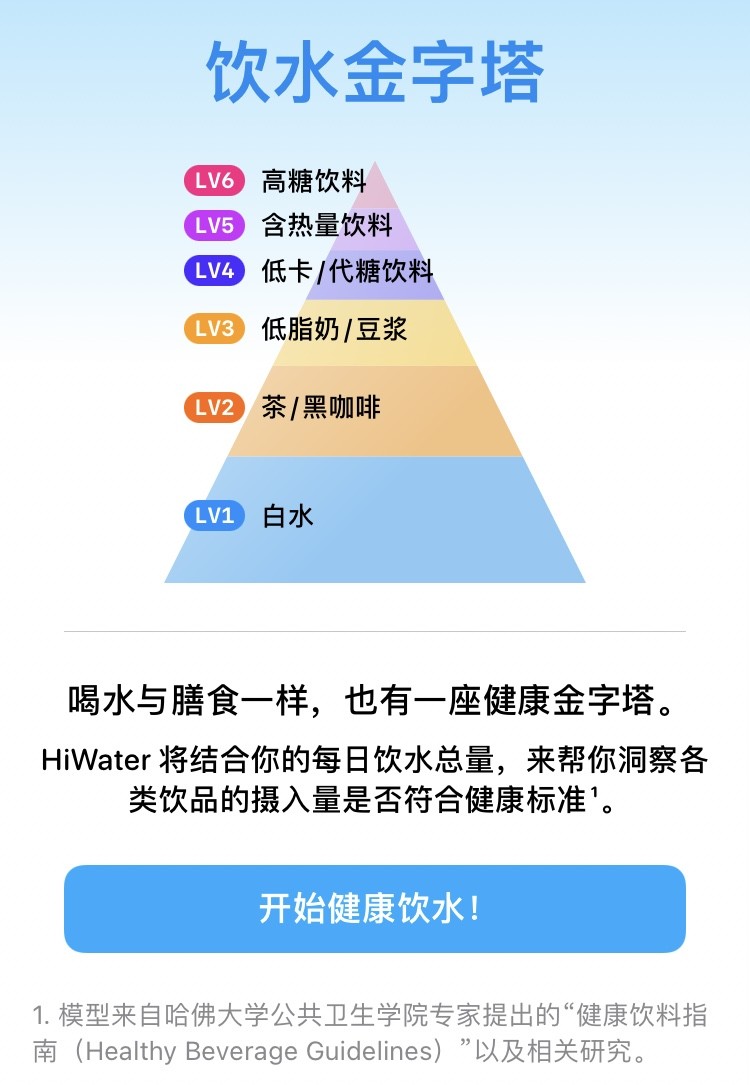 For drinking water reminder applications, we generally face the problem that the preset drinks are difficult to cover the real world situation.

Therefore, in HiWater, we can also add or edit beverage categories to the “Drinking Pyramid” model, turning a vague category into an accurate single product. For example, HiWater presets coconut water as a drink, but I drink more Sam’s coconut water, so I will edit it directly into the nutritional content of Sam’s coconut water and reclassify it into the low-calorie beverage category; For example, the lemonade I drink is a 1:10 mixture of concentrate and water, so I also edited the preset “lemonade” into “homemade lemonade” by calculation, and calculated the corresponding calories from the concentrate.

Of course, with more manual editing, we will naturally think: How to quickly record these commodity beverages with nutritional information on the outer packaging into the app?

HiWater’s answer is “scan directly with the camera”, please look directly at this animation:

I guess that Apple may have given OCR-related APIs in the system, and the developers will use it for this function. This is my favorite feature. In actual use, the recognition is faster than in the animation, and the recognition rate is high and stable. Occasionally there may be some recognition errors, such as recognizing ≥ as 2, but I can forgive that.

In this way, the Nongfu Spring Power Emperor Lemonade purchased at the airport, and the Lanfangyuan low-sugar frozen lemonade that I have stocked up in two boxes can all be swept into my beverage catalog. When recording, you can also adjust it according to your actual situation. For example, although the iced lemon tea is low in sugar, I still drink it with ice water or lemonade, so 50 ml of iced lemon tea, tight lemonade, and lemonade often appear in my drinking water record. Then comes 200ml of water or lemonade.

The scales I used to make coffee by hand are now mostly used for weighing water, but later I found that as long as I remember the pattern position of the water poured on the cup, I can roughly know the amount of water in the cup without a scale. Take MINISO’s 580ml cola cup as an example, the two dents in the cup can be roughly regarded as 200/500ml scales respectively. To drink water in the company, you can consider using large cups for water at the work station. Before, because the cups were small and the number of times was small, you drank too little water at work. After a week, I did drink more than 3.3L of water a day. The rest of the basic functions, such as pop-up reminders to drink water, simple estimation of body water, and estimation of the amount of water that needs to be consumed according to the user’s situation, etc., I will not expand them one by one. WaterMinder also has them. I think these are a kind of “drinking water”. A free feature that any app should do. In fact, I originally wanted to make an application that reminds and records the daily water consumption through shortcut commands. It is not difficult. I have even made the social dead version of shortcut commands to run regularly, but after experiencing some interactions with HiWater, I finally Decided not to torment myself.

HiWater’s various desktop widgets and quick entry of drinks broke my inherent cognition of iOS widgets that “can be seen but not used” (I didn’t use any widgets on iOS before, but this time I became addicted, by the way. Added widgets for the rest of the app in one go xD).

HiWater adopts the payment mechanism of free download + in-app purchase unlocking. If you are interested in it after reading the article, you can install it to play. If you want to pay for it, it is recommended to confirm that you have a strong need to urge yourself to drink water, and then subscribe for a month to try – I bought it directly because I realized that I may have to continue a life like “drinking more water” Months, or even years, are not very rational consumption habits in themselves.

If an app can help me maintain a certain healthy habit for a long time, I am willing to give an evaluation of “Ten Knives Buyout, it is a great deal”; if not, I will also use “Three minutes of popularity and three minutes of harvest” to comfort myself.

> Practical and easy-to-use genuine software , presented to you by the minority 🚀

This article is reproduced from: https://sspai.com/post/74956
This site is for inclusion only, and the copyright belongs to the original author.