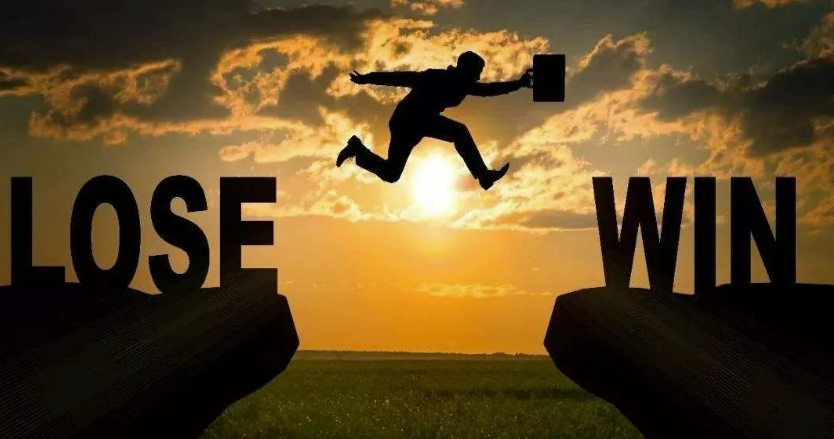 This is the 1724th original issue of the vernacular blockchain

A big event happened in the past two months, and I believe that all the old friends who follow the circle know:

That is dydx “jumping”, the V4 version will leave the Starkware or ETH ecosystem, and then go to Cosmos to make a chain by yourself!

You must know that dydx is the absolute “top card” of derivatives on the chain, and it is also the ace project on Starkware. This move is a “small crit” for Starkware, including the entire Ethereum L2 ecosystem.

So here comes the question, dydx is definitely not stupid, he must be willing to move after seeing the benefits of Cosmos~

What did you see?

Many people’s first reaction to dydx job-hopping is that the security of dydx will be reduced.

Of course, there is nothing wrong with this statement. After all, on Starkware, the security is basically equivalent to ETH. If you go to Cosmos to build a new chain yourself, the security is definitely not comparable to ETH, especially when it was just launched~

However, as the saying goes, if you lose, you will gain, and some compromises in safety are in exchange for a leap in performance.

Remember how Axie took off?

The core lies in the Ronin side chain. Once the side chain is launched, TPS has soared compared with the original, and the transaction price has dropped sharply. The result is an exponential increase in the number of users.

Yes, security is important, but in order to be a “killer app”, your primary concern may be more performance, or more accurately, “user experience”, which includes system performance, transaction price, experience smoothness…

In terms of performance, in addition to the advantages of consensus mechanisms such as POW and POS, Cosmos can also jump out of the inherent shortcomings of EVM architecture in performance, which is a “performance bottleneck” that cannot be avoided no matter how much tossing on ETH. .

Not to mention the price, the transaction fees of the entire Cosmos ecosystem are much cheaper than those of ETH. Of course, after ETH merges, L2 fees can be greatly reduced through EIP4488 and Danksharding, etc., but these things will only be seen next year at the earliest Now, L2 is still more expensive than Cosmos L1.

Therefore, no matter from which point of view, going to Cosmos to make an Appchain is destined to be much better than being a Dapp on any L1 in terms of user experience.

Buterin once said that he is optimistic about multi-chain in the future, but not cross-chain.

How to understand it?

For example, on the ETH side, head applications such as Uniswap, AAVE, etc., need to be deployed on each chain once , once on Ethereum, once on the big Alt L1, once on Arbitrum on the L2 side, and once on Op , in the future Zk-sync or Starkware will definitely have to do it again…

On the Cosmos side, you look like Osmosis, the largest Dex. You only need to deploy one side. Assets on other chains can directly connect to Osmosis through the IBC protocol, and even call each other through Interchain Account.

In recent months, a series of hacked cases worth hundreds of millions of dollars, such as Wormhole, Ronin Bridge, Hamony Bridge, Nomad, etc., have also proved to some extent the “cross-chain” vision that V God is not optimistic about, which is not safe!

Of course, if there is no Alt L1, just look at ETH and several L2s. Because of sharing the same settlement layer, the security of L2-L2 is much better than that of L2-Alt L1, so it can barely be counted as half “more” chain” form.

The real multi-chain is the homogeneous chain form in which all IBC communication is used in the Cosmos ecosystem.

However, IBC is also a double-edged sword. At least for now, it only supports the homogeneous chain interconnection made by the Cosmos SDK. It is much more troublesome to connect ETH or other Alt L1s, which is why many people are optimistic about ETH. A long-term vision of +L2 multi-chain ecology VS Cosmos multi-chain ecology.

If you want to come to dydx to migrate Cosmos, the optimism about the IBC multi-chain ecology must be one of the important reasons.

Another benefit of building L1 with Cosmos is that flexibility is greatly enhanced.

The flexibility here has two meanings:

One is the flexibility of the Cosmos SDK itself. When you build a chain, your consensus engine will not bind Tindermint (software that can replicate applications safely and consistently on different machines), nor will it force binding. IBC Protocol (Inter-Blockchain Communication Protocol is a general cross-chain information transmission protocol launched by Cosmos), in other words, many parameters can be selected by yourself.

The second is the choice of modularity . After Celestia proposed the concept of modular blockchain , the three-layer structure of execution, data validity and settlement has been deeply rooted in the hearts of the people. Now the latest modular layering method separates the consensus. Pulled it out and made a 4-layer structure.

On the Ethereum side, if you don’t want to become a Dapp, the best choice is to choose to be a Rollup chain, but Rollup has too high technical requirements for the team , so until now, you can see basically several Rollups, whether it is ZK or OP are basically top-level teams, and most of them are rollups of general contract platform type, not real Appchain (except dydx and IMX).

On the Cosmos side, in addition to flexibly building a traditional L1 with the SDK, and making all three layers by yourself, you can also choose to only do one or two of them, such as throwing the DA to Celestia and the settlement to Cevmos , only do the execution yourself, or do the execution + settlement yourself, and only outsource the DA… In short, you can play various combinations. 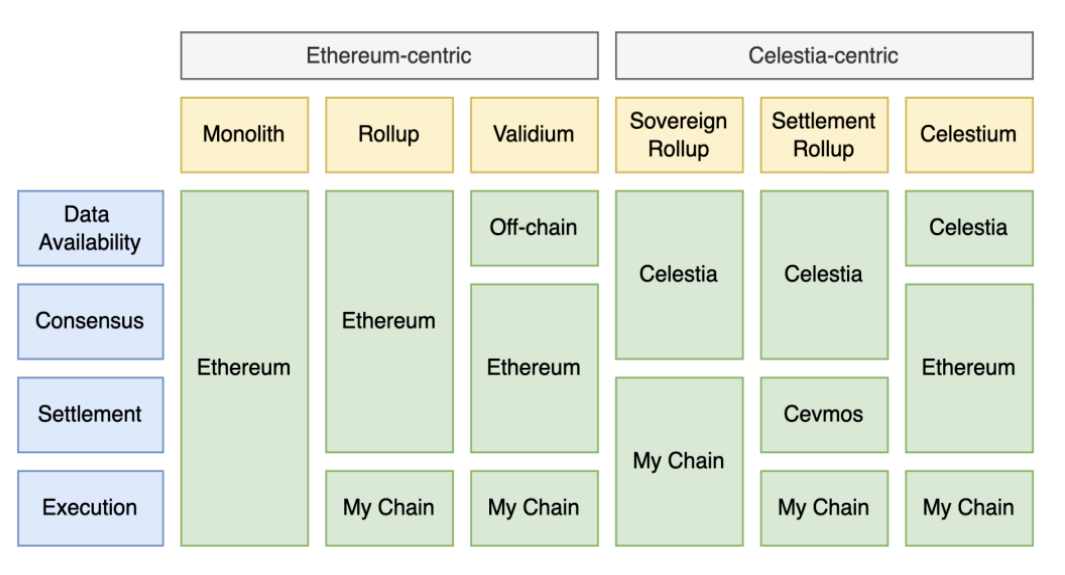 There is also a project under development, Dymention, which is working on the Rollup Development Kit (RDK). When the time comes to start a Rollup chain on Cosmos, it may be much simpler than the ETH side. The sense of Rollup as Service is both visual.

From the above topic, the last difference can also be drawn, that is, both are Rollup, which is called smart contract Rollup on the ETH side (you can choose to upgrade to the sacred Rollup – Enshrined Rollup one day in the future), and the Cosmos side is the main sovereign Rollup, For example, the previous L1 Celo (a layer 1 blockchain) planned to choose to give up its independent L1 identity and come to Cosmos to do a sovereign Rollup.

Both Rollups are still in the discussion and construction stage, and belong to both ends of the spectrum of the Rollup end. Here we simply understand the current smart contracts Rollup (OP, Arb, Zk-sync) as the predecessor of the sacred Rollup. After all, they all have a strong dependence on Ethereum.

What are the characteristics of the sovereign Rollup on the Cosmos side?

Technically speaking, the consensus layer and security are handed over to DA (Data Availability Layer) , such as Celstia, to do the execution and settlement by themselves.

Abstractly speaking, a sovereign rollup refers to the right to fork at any time without losing security, that is, to take the community consensus as Layer 0 – the bottom layer.

Maybe you are still dizzy listening to it. To put it more vernacularly, if something happens to a Rollup like Arb or OP, or if the community has a major disagreement and wants to fork, it will not be easy, because Their core contracts are deployed on ETH L1, and if they want to fork, they have to go through complex governance, the deployment of centralized teams, and even ETH’s EIP proposal.

On the sovereign Rollup side, even if a few people want to fork, they can have the right to fork without permission, because the complete data is in the DA.

As for what do you mean by this right? It’s hard to say now, it’s all about taking one step at a time. Maybe one day when the blockchain develops to a certain stage, everyone will realize the importance of this “safe and permissionless fork” right? Sovereignty doesn’t necessarily trump holiness, but at least he gives you one more option.

To sum up, building a chain on Cosmos has four advantages over ETH or other L1s: performance, multi-chain, modularity, and sovereignty.

I believe that as a “future blockchain killer application”, these four points will be very attractive. At least, the weight of the four points combined should be higher than the security point, right? Furthermore, there is the shared security of the Cosmos Hub, Interchain Security, to make up for it. We have reason to believe that, in the Cosmos ecosystem, a “killer” application will be born sooner or later.

L1, or Layer 1 , is another name for the underlying blockchain and is the main network in the ecosystem where it resides. For example, Binance Smart Chain (BNB), Ethereum (ETH), Bitcoin (BTC) and Solana all belong to the Layer 1 protocol, while the opposite off-chain solutions and Layer 2 solutions are built on the main chain.

L2, which exists relative to Layer 1, is a general term for a series of off-chain scalability solutions such as the Ethereum Layer 2 network.

This article is reprinted from: https://www.hellobtc.com/kp/du/08/3990.html
This site is for inclusion only, and the copyright belongs to the original author.