Income is a chain of events, and patience is an essential part.

The performance growth of more than 20% seems normal against the background of the substantial increase in advance receipts last year, but it is also rare. In the first half of the year, especially the second quarter, the epidemic was raging, and many cities adopted closed management, which obviously restricted the growth of liquor. In the consumption scenario, in the current environment, the non-net profit can be increased by nearly 30%, which can also indicate that the vitality of the company is further blooming.

Simply make a split, see the bright spot in the financial report, and a few things that you don’t understand, record it, and verify it on your behalf

The second is the increase in cost, which is in the normal range if only in terms of the average ton cost, but not so normal in terms of the disclosed cost of mid-to-high-end liquor.

The mid-term report shows that the revenue of mid-to-high-end liquor increased by 29%, but the operating cost increased by 46%, which also led to a 2.5% drop in the gross profit margin of mid-to-high-end liquor. This is also a very abnormal situation, because under normal circumstances, the operating cost The growth rate is often lower than the revenue growth. If calculated according to the same revenue growth data, the difference is about 400 million.

In terms of the main components of operating costs, the increase mainly includes direct materials and direct labor. So I wonder if prices have gone up? However, compared with Wuliangye and Maotai, operating costs have not risen significantly.

The answer to this is not yet known.

From the perspective of operating cash flow, there are several main reasons for the net outflow.

The first is to reduce inflow

Because the money was collected in advance last year. The net operating cash flow in 2021 is 15.3 billion, compared with 3.9 billion in the same period in 2020, and the operating cash flow was negative in the first quarter of this year, which is also the reason.

The second is the increase in outflow. From the data point of view, it is mainly the cash paid to employees and various taxes and fees. 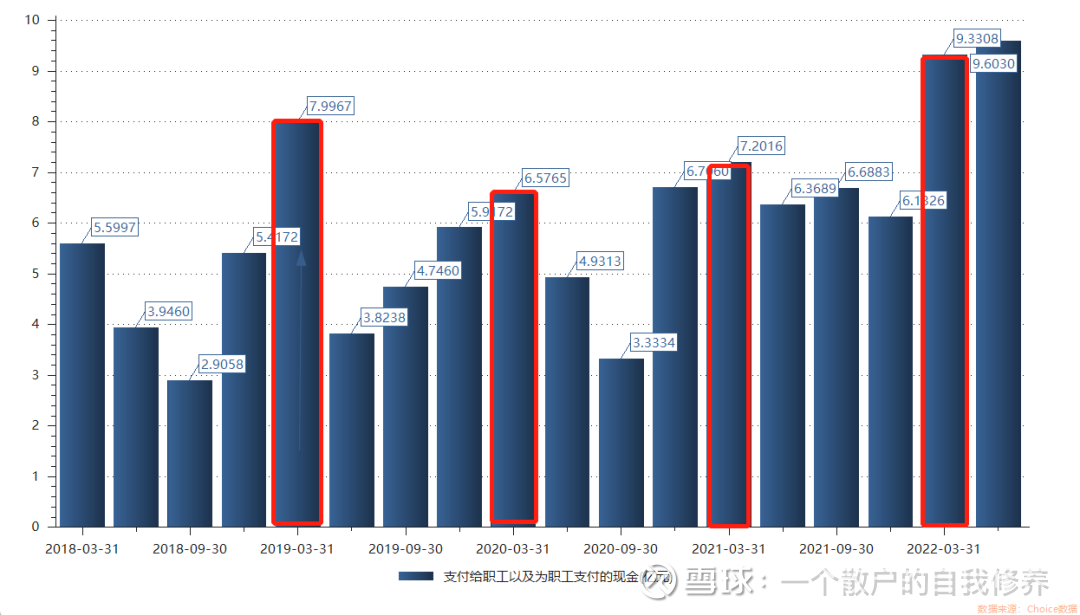 According to previous years, the cash paid to employees in the first quarter is the highest, and why will the proportion increase in the second quarter of this year? No reasonable explanation has been found yet, but it can be seen that the wages paid to employees have also increased significantly. In May last year, Yanghe announced that each employee would increase their wages by 800 yuan, and that the income of employees is linked to the company’s benefits.

In the long run, letting employees increase their enthusiasm for work, as well as their sense of identity and belonging. If you want a horse to run, you have to feed the horse.

On the other hand, the number of dealers

Distributors outside the province still fluctuate greatly. Are manufacturers actively optimizing distributors, or are distributors withdrawing?

During the reporting period, the change in the number of dealers was mainly due to the company focusing on the principle of pro-business, safe business, support for business and wealthy business, focusing on the creation of strategic leading products, and optimizing the structure and layout of dealers.

The data in this regard still needs to be tracked to see if it can be stabilized later.

The performance of the data in this interim report is still very eye-catching. The price per ton and the sales volume have increased simultaneously. The deducted non-net profit has also risen sharply, and there is no overdraft. Although the staff compensation has increased a lot, it also gives full play to the offensive power of employees, which is not a bad thing for shareholders.

According to the current situation, there is still a chance to achieve a net profit of 10 billion this year. The current market value is around 2600, and the current price-earnings ratio of 10 billion is 26 times, which is a reasonable range, and the future can enjoy and corporate growth. The simultaneous increase did not take advantage of Mr. Market!

The above content is for records only, not as a recommendation for buying and selling. Profits and losses are at your own risk

The arch of the sun died, and came unexpectedly

Check out one or two!

There are 32 discussions on this topic in Snowball, click to view.
Snowball is an investor’s social network, and smart investors are here.
Click to download Snowball mobile client http://xueqiu.com/xz ]]>