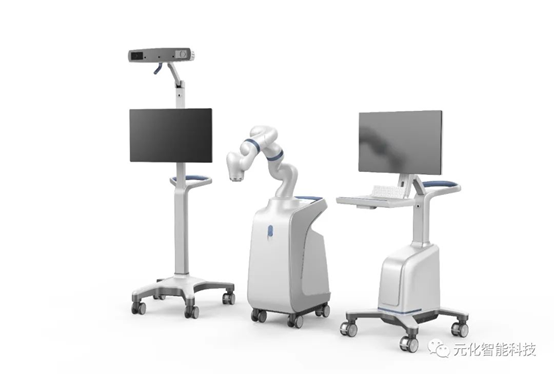 The total orthopaedic surgery robot system independently developed by Gushengyuanhua can assist doctors to complete various orthopaedic surgeries such as total knee replacement, total hip replacement, unicondylar knee replacement, spine and trauma. Gushengyuanhua total knee replacement surgery robot has broken the monopoly of foreign technology, and has self-developed navigation solutions and software systems. There is no need for osteotomy plates (or similar tools) to assist during the operation, and there is no need to use bone nails to fix the surgical site on the patient’s leg. The robotic arm assists doctors in the entire process of precise osteotomy in an intelligent and interactive way. As the only product of this type that has entered the NMPA special review process for innovative medical devices, under the leadership of the National Orthopaedic and Sports Rehabilitation Clinical Medicine Research Center, the First Medical Center of the Chinese People’s Liberation Army General Hospital, Sichuan University West China Hospital, Xinjiang Medical The First Affiliated Hospital of the University, Xiangya Hospital of Central South University, and the Second Affiliated Hospital of the Chinese People’s Liberation Army Army Medical University jointly completed a multi-center randomized controlled clinical trial study. The statistical results of the clinical trial show that the recovery accuracy rate of the force line of the robot group is 85.4%, and that of the manual control group is 65.6%, which fully proves that the product has higher accuracy than traditional surgery.

This article is reprinted from: https://readhub.cn/topic/8foaRNZaxz4
This site is for inclusion only, and the copyright belongs to the original author.