About an hour ago, “LatePost” published a long article reviewing how domestic Internet companies have been saving money for more than a year. But like we wrote:

They are reducing costs and increasing efficiency, and some companies are really short of money. Since the end of last year, Kuaishou has included cost reduction and efficiency improvement into the quarterly assessment indicators for executives, and its importance is equal to its performance. In the first quarter of this year, Kuaishou saved 100 million yuan by cutting employee benefits, and spent 600 million yuan less on R&D and administrative expenses, mainly composed of employee salaries, a loss of 2 billion yuan less than the same quarter last year. In the second quarter, they made persistent efforts to save 2.3 billion yuan.

Public data can also be “confusing” at times. For example, Tencent’s operating profit in the second quarter of this year decreased by 42.72% year-on-year. After deducting the investment profits and losses that fluctuated every quarter, the operating profit rate of its main business has rebounded for three consecutive quarters, and it can still make a net profit of 25.6 billion yuan in a quarter before tax.

According to our calculations, by the end of the first half of this year, the top ten Internet and technology listed companies in China will have at least 2,254.4 billion yuan in cash or equivalent assets (such as time deposits, demand deposits, large-denomination certificates of deposit, bonds or stocks) lying on their balance sheets. investment, etc.), 238 billion yuan more than the end of the first quarter.

In descending order of cash and equivalent assets, these companies are:

The huge cash reserves come from daily operations, listing or debt financing. For example, Meituan will refinance $10 billion in 2021, and Pinduoduo has also raised $12 billion since its listing in 2018. Alibaba, JD.com, Baidu, and NetEase in the list have returned to Hong Kong for listing and financing in the past two years. There is also Kuaishou, which contributed to the largest IPO of Hong Kong stocks last year.

If it weren’t for continuous buybacks or big dividends, big companies would have more cash on hand — or another way . 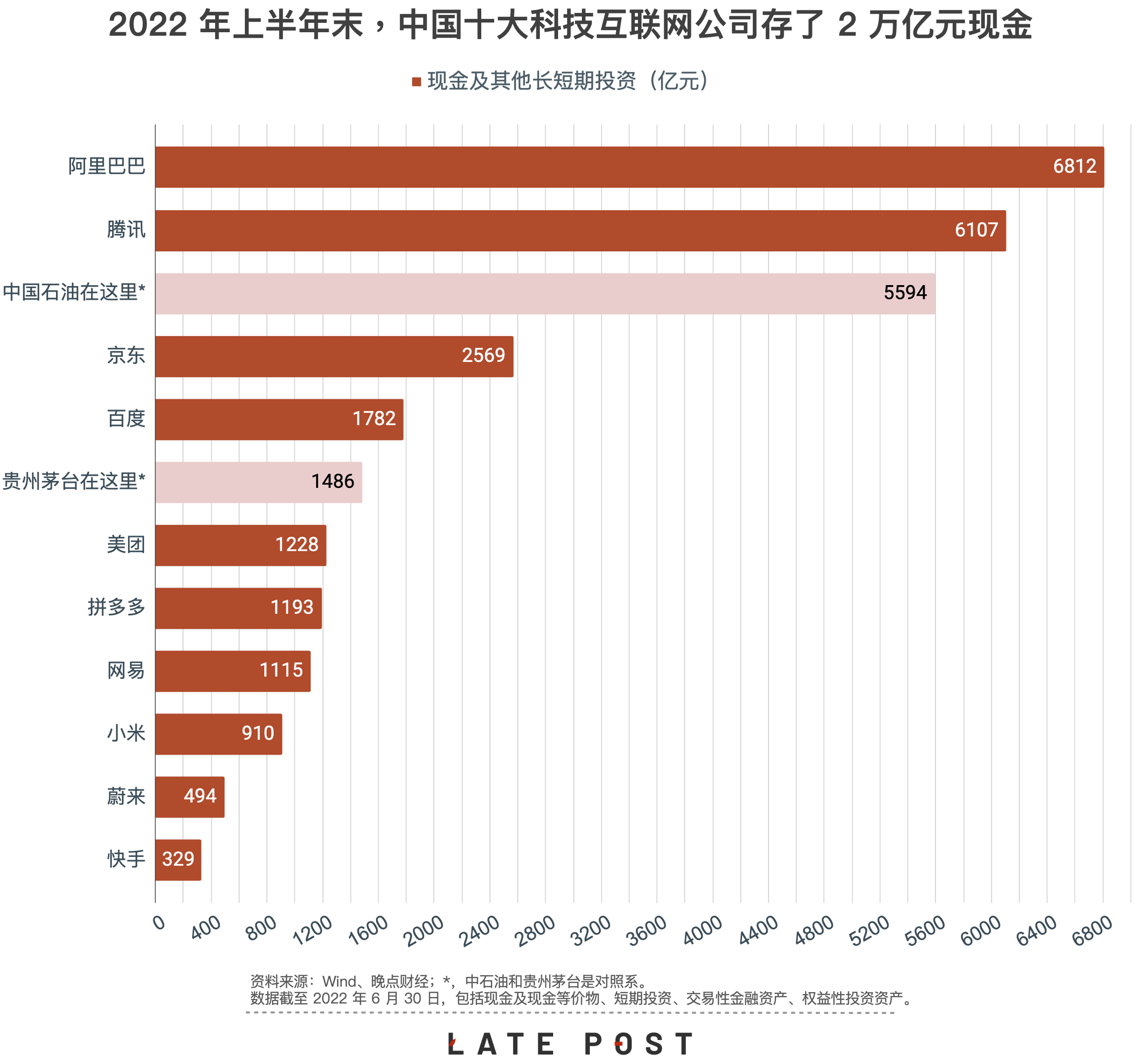 After Russia announced that it would completely stop the gas supply of Nord Stream 1, the European energy crisis showed signs of escalating again. EU countries will discuss interventions on September 9 to avert an energy disaster that could turn into an economic, social and even financial crisis.

Energy-intensive metal smelting companies will be affected by electricity and reduce production, thereby dampening the supply of industries that have just recovered from the “cutoff” of transportation. Chemical companies are also facing production cuts.

According to data released by Eurostat, energy and food prices in the euro zone continued to soar, and the inflation rate in August reached a record high of 9.1% on an annual basis.

Some companies with upstream resources have temporarily benefited from this round of crisis, mainly oil, natural gas, and mining giants.

Know later丨The “Durian King” with an annual income of 10 billion yuan is listed today, with a market value of 18.7 billion Hong Kong dollars

There are not many new shares listed this week, with one A-share and one Hong Kong-listed each, including Hong Jiuguo, which was listed today (September 5). Also scheduled to list in Hong Kong this week is artist management company Lehua Entertainment, which has delayed its IPO.

Hong Jiu Fruit was established in 2002 and its current market value is HK$18.7 billion. Most people can often eat the fruits it sells. According to its sales revenue last year, Hongjiu Fruit is the largest durian distributor in China, with an income of 3.5 billion yuan from selling durians alone. At the same time, it is also a Chinese dragon fruit, mangosteen and longan. top five distributors.

In order to sell high-quality fruits to consumers, Hongjiu Fruit directly purchases fruits from more than 100 origins, and has 16 fruit processing factories in core origins such as Thailand and Vietnam; on the sales side, Hongjiu Fruit has set up 19 fruit processing plants in China. A sales branch, created 18 fruit brands, and sold these fruits to more than 300 cities.

On September 5, the National Computer Virus Emergency Response Center and 360 Company respectively released investigation reports on the overseas cyber attack on Northwestern Polytechnical University. The investigation found that the source of the cyber attack was the “Special Intrusion Operations Office” of the National Security Agency. On June 22, Northwestern Polytechnical University issued a statement saying that it was attacked by an overseas network.

Temu application is listed on Google and Apple App Store.

Pinduoduo’s cross-border e-commerce platform Temu app has been launched on Google and Apple’s app stores, with the introduction of “Team Up, Price Down”, and the mode of buying in groups with lower prices is similar to that of Pinduoduo.

Shanghai is the city with the largest number of cafes in the world.

A total of 132 cases have been infected in this round of epidemic in Guiyang.

Bank of Nanjing denies any involvement in the “relevant village and town bank case”.

In August, Caixin China’s service industry PMI sentiment dropped slightly, down 0.5 percentage points from the previous month, but continued the strong recovery trend since June. In terms of sub-item data, the new orders index for the service industry fell slightly in the expansion range in August, the employment index continued to be below the line of prosperity and decline, and the contraction rate narrowed slightly, and the input price index for the service industry rose slightly above the line of prosperity and decline. 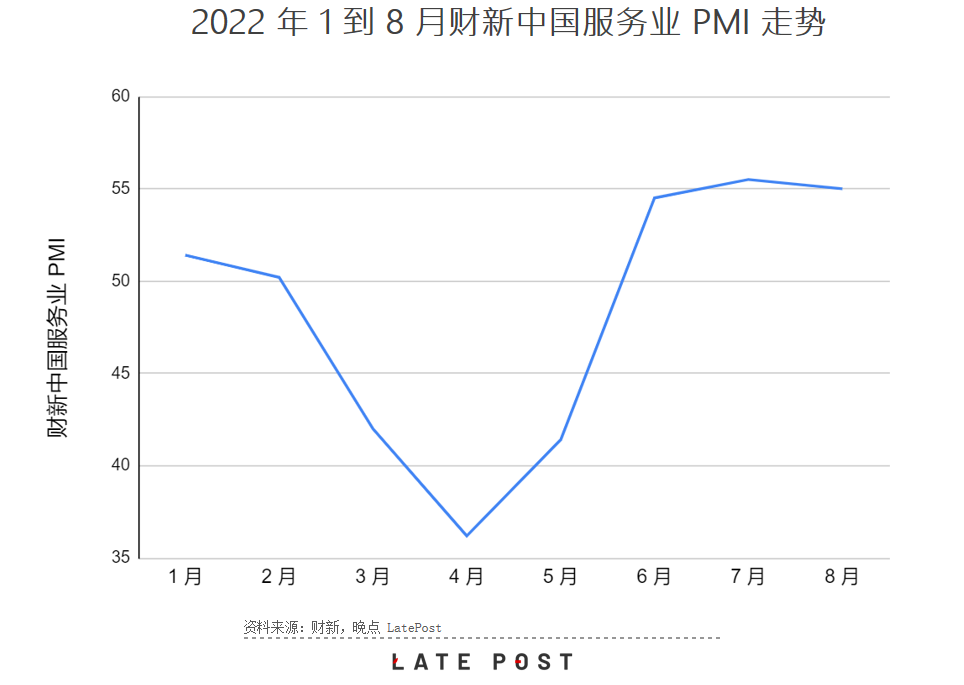 In the first seven months of this year, Yiwu sold 1.75 billion yuan of Christmas supplies overseas.

Every year, more than 100 countries and regions around the world buy more than 20,000 Christmas items from Yiwu. In the first seven months of this year, Yiwu’s Christmas exports increased by more than 80% year-on-year. According to CCTV news reports, 178 warehouse companies in Yiwu Port have also fully resumed work. Previously, due to the epidemic, the production of some factories in Yiwu was affected.

Primary school students can only play Tencent games for 4 hours during the Mid-Autumn Festival holiday this year.

Media reports said that SHEIN’s GMV increased to US$16 billion in the first half of the year.

According to 36 Krypton’s news, the sales of cross-border clothing e-commerce SHEIN in the first half of the year exceeded 16 billion US dollars, a year-on-year increase of more than 50%, and it is expected to complete the annual sales target of 30 billion US dollars one year ahead of schedule. In the first half of the year, the average customer unit price of SHEIN in the global market was US$75.

The Apple launch is imminent, and 34 million iPhone 14 / Pro series have been stocked.

Apple will hold a new autumn product launch in the early morning of this Thursday (8th). Overseas market sources said that more than 34 million new iPhone 14 and Pro series machines have been produced, and the production target for the year is 90 million. Previously, Tianfeng International analyst Ming-Chi Kuo predicted that the average selling price of the iPhone 14 series would rise by 15%, with a higher shipment target.

Previously, it was reported that, affected by the rise in raw material prices and the decline of subsidies for new energy car purchases, BYD will be related to Dynasty Net (including Qin, Yuan, Song, Han and other series) and Ocean Net (including dolphins, seals, destroyers and other series). The price increase of new energy models ranges from 6,000 yuan to 10,000 yuan. BYD said this is false information. BYD has carried out two rounds of price increases this year. In February, BYD raised the prices of new energy models related to Dynasty.com and Haiyang.com by 1,000 yuan to 7,000 yuan, and in March, it raised prices for 10 models.

On September 3, the National Medical Insurance Bureau issued the “National Medical Insurance Bureau’s Reply to Recommendation No. 4955 of the Fifth Session of the Thirteenth National People’s Congress”, which pointed out that because the clinical use of innovative medical devices is not yet mature and the amount of use is temporarily difficult to predict, it is still It is difficult to implement the volume-based method, and the state will set aside a certain market for innovative products in addition to centralized volume-based procurement. As of the end of August, a total of 176 innovative medical devices have been approved in China, and the number of approvals this year has exceeded that of last year.

The provident fund paid in Sichuan can now be used to buy a house with a loan in Chongqing.

The family of Porsche’s founders intends to take advantage of the IPO to once again take direct control of the company.

According to media reports, the Volkswagen Group will hold a meeting to discuss whether Porsche should go public in late September or early October and whether to approve the sale of a 25% stake in Porsche plus a preferred share to Porsche SE, an investment fund controlled by the family of the brand’s founders. The move would strengthen the Piëch family’s control over Porsche.

Because young people do not drink, Japan’s Suntory is targeting overseas markets.

Faced with an aging domestic market and young people not drinking alcohol, Japanese beverage companies are accelerating their overseas expansion. A beer that Suntory launched in Australia last year topped the local canned cocktail market, and Suntory is now trying to replicate that success in North America.

From September 5th, the North American price of Tesla’s fully automatic driving system will increase by 25%.

Recently, Jake Sheinman, co-founder of Snap’s Web3 team, said that the entire team was laid off because Web3 did not contribute to the company’s goals. Snap previously announced that it would lay off 20% of its workforce, which will also affect projects such as Snap Originals skits, in-program games, and camera drone Pixy.

The Lord of the Rings TV series that Amazon has spent heavily on is not as good as the movie version.

On September 2, the “Lord of the Rings” TV series “Rings of Power” was launched on Amazon, with more than 25 million viewers, setting a record for Amazon’s streaming platform. Some media estimates put the production cost of the first season at $465 million, with an average of more than $50 million per episode. However, the big money failed to make a good reputation, and the audience ratings on Rotten Tomatoes and Metacritic were lower than the movie version. The rating of “Ring of Power” on Douban is also lower than that of “Dragon Family”, which was launched at the same time.

This article is reprinted from: https://www.latepost.com/news/dj_detail?id=1302
This site is for inclusion only, and the copyright belongs to the original author.