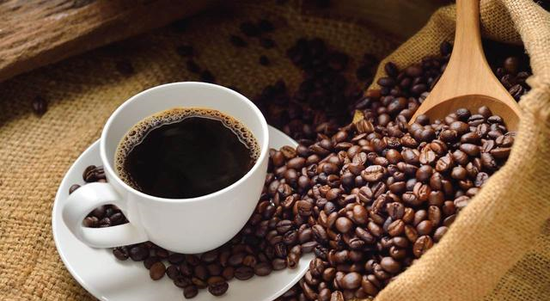 In most people’s minds, coffee has a strong “lifestyle” style, and its target customers are mainly middle-class consumers in high-tier cities.

But just like all new things and imported products, coffee has also experienced a downward penetration process in the Chinese market, gradually radiating from the first- and second-tier cities to the third-, fourth-, and fifth-tier cities.

Trying to seize this sinking trend is an old face in the tea industry, Michelle Bingcheng, whose wholly-owned coffee brand “Lucky Coffee” is expanding rapidly in the sinking market.

Like its brother brand Michelle Ice City, Lucky Coffee also focuses on the ultimate cost-effectiveness: 5 yuan iced American, 6 yuan latte, 5-7 yuan fruit coffee, the most expensive is only 15 yuan, its price is not only far lower than Starbucks , even cheaper than Ruixing, which is known as “Starbucks replacement”.

According to the official website data, Lucky Coffee will be open to join in April 2020. As of July 30 this year, the number of its stores nationwide reached 1,400. In terms of the number of stores, Lucky Coffee is already the fourth-ranked coffee brand in China, second only to Luckin, Starbucks and NOWWA Coffee.

However, Lucky Coffee, which has been making great strides along the way, has also encountered realistic “obstacles”: the main consumer market for coffee is still located in first- and second-tier cities, and its potential in the sinking market has not been clearly verified. As the only coffee brand among the TOP 10 players that takes the ultra-low-cost “going to the countryside” route, Lucky Coffee is exploring a road that no one has traveled before.

“Super low prices” are not all profitless.

Lucky Coffee once stated in its franchise information that after visiting the beverage market in many provinces, it found that freshly ground coffee below 15 yuan was completely blank. Even Ruixing, which is known for its cheap price, costs 13 yuan for a standard American cup. Lucky Coffee, which is positioned as freshly ground coffee, uses the same Arabica beans as Starbucks, but the American style only sells for 5 yuan a cup.

The ultra-low price has made many analysts puzzled: “Can a cup of freshly ground coffee make money for 5 yuan?”

In fact, coffee itself is not a very expensive beverage. At present, the price of coffee in first- and second-tier cities is often 20 to 30 yuan, and a large part of it is the brand premium, high rent and labor costs.

A simple calculation shows that the coffee beans consumed by a cup of coffee are about 20 grams, and the cost is about 1 yuan. The milk uses room temperature milk, and the price is about 1.5 yuan. In addition to the cost of cups, straws, etc., the cost of a cup can be controlled at about 5 yuan. American coffee can be controlled at about 3 yuan due to the simple ingredients and lower cost.

At present, there are other brands of “ultra-low-price coffee” in China, whose positioning is very similar to Lucky Coffee, such as “Cubic Coffee”, “Dry Coffee” and “Jie Thirsty Coffee”, among which the more well-known “Worker’s Coffee” , has opened more than 20 stores in Wuxi and surrounding areas, and the main American coffee is only 4 yuan a cup. This also proves from the side that the “ultra-low price” of coffee is not without profit.

In addition, Lucky Coffee not only sells coffee, its products also include non-coffee beverages such as ice cream, bubble milk tea, sundae, fruit tea and other non-coffee drinks that Michelle Bingcheng is good at. 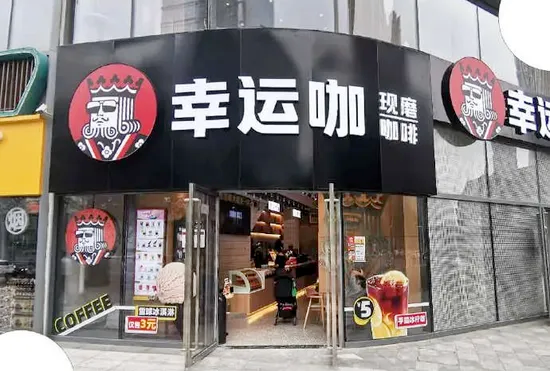 The coffee with relatively low profit actually acts as the role of a single product that attracts consumers to come to spend and punch cards. The real contribution to the profit is the special coffee and other drinks at the 10-yuan level.

In addition, there are many places where costs can be saved. The rent and staff costs of shops in the sinking market are relatively cheaper. High sales promote bulk purchases in units of 100 tons or even 1,000 tons, gain bargaining power, and share the logistics supply of Michelle Ice City. chain. All of these can lower the threshold for store profitability.

But despite this, like Michelle Ice City, low-profit Lucky Cafe stores need to sell more if they want to make a profit. According to estimates, a Lucky Cafe store needs to achieve an average daily revenue of about 1,500 yuan (that is, selling 200-300 cups of drinks per day) in order to achieve profitability.

When Luckin went public in 2019, its founder Qian Zhiya once said, “The listing of Luckin is the beginning of equal rights for coffee consumption in China”; “Luckin’s brand vision is to provide everyone with high-quality, cost-effective, high-quality products. Convenient coffee, so that every Chinese can drink better coffee.”

Although Ruixing’s product prices are more affordable than Starbucks, 77% of its stores are located in first- and second-tier cities, and the transaction price of the main products is concentrated between 15-20 yuan, which is actually helping consumers in high-tier cities “equal rights”.

Lucky Coffee took over Ruixing’s stick and took a step closer to “coffee consumption equality”. Lucky Coffee’s per capita unit price of 7.88 yuan is much lower than Luckin’s 19.34 yuan. More importantly, its layout cities are more sinking than Ruixing (more than 60% are located in third-, fourth-, and fifth-tier cities).

The goal announced on the official website is to open Lucky Cafe to every university, every county, and every city.

However, despite similar visions and similar names, due to the differences in the positioning and distribution of the two companies, there is no fierce competition between the two companies. The biggest pressure Lucky Coffee faces in the sinking market actually mainly comes from the milk tea industry. 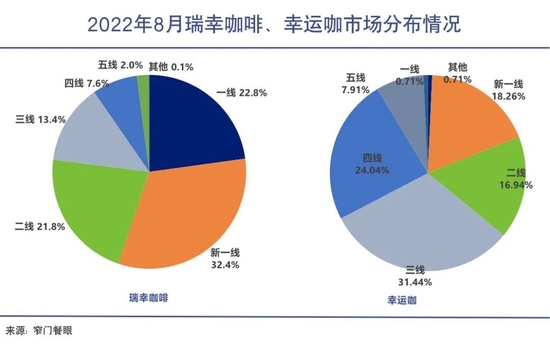 On the one hand, as Zhang Hongji, the founder of Lian Coffee, said, about 95% of Chinese people cannot drink “black coffee” without milk or sugar. There are not many real coffee lovers in the sinking market, and consumers consume more. Mostly just a coffee-flavored drink. To a certain extent, coffee brands are more like milk tea shops featuring coffee, and the boundaries between the two are blurred.

A franchisee of Lucky Cafe once said in an interview with the media that its opponents are not other Lucky Cafe stores two streets away, nor Luckin and convenience stores, but two Michelle Ice Towns on this street.

On the other hand, tea brands such as HEYTEA, Nai Xue’s tea, CoCo, and Yidian have all launched coffee products one after another. In particular, CoCo, which occupies the sinking market, can compete with a little bit. Whether it is competition drinks or milk coffee, they will have more confrontation with lucky coffee in the sinking market.

Big guy is not afraid

At present, there are not many enterprises and capitals who dare to make such a decision.

Under the sluggish consumption situation in China, the coffee track has thriving in the past two years, and has been sought after by capital and loved by consumers.

And China’s current number of coffee stores and chain rate is at a low level. According to the “Coffee White Paper” released by Deloitte, as of the end of 2020, there were 108,000 cafes in China, of which 75% were located in second-tier and above cities. The overall chain rate was low, with chain brands only accounting for 13%. 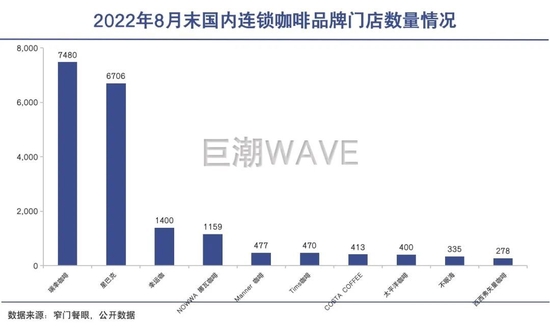 This means that there is still a lot of potential and room for improvement in the domestic coffee market in low-tier cities and sinking markets, and in terms of market concentration improvement.

Lucky Coffee has made a strategic choice similar to its brother brand Michelle Bingcheng, that is, through the parity strategy and franchise model, it can reach a wide range of sinking users and do small business in the big market. And there are not many companies and capitals who dare to make such a decision.

Correspondingly, it is represented by Hey Tea and Man Coffee, which mainly do business with high gross profit and high unit price in high-tier cities. But this means a strategic abandonment of China’s wider market space. Hua Shan, the founder of Huayuhua, once named HEYTEA in the circle of friends, commenting that “even if it has more than 400 stores, it is only one-twentieth of the top brands. Even if they all line up, they can’t do much business. If you can’t get off the creative award stage yourself, the cost will be higher and higher, and a lot of imitated brands will be brought into the ditch.”

From the current point of view, the operation mode of Michelle Bingcheng and Lucky Coffee’s “big market and small business” has achieved certain success: Michelle Bingcheng’s valuation in the primary market has reached 60 billion yuan, far exceeding that of the listed company. The number of stores of Lucky Coffee has surpassed that of long-established players such as COSTA and Pacific Coffee in just two years.

However, in order to occupy a place in the sinking market, Lucky Coffee still needs to face many challenges.

On the one hand, the demand for coffee in the sinking market is still doubtful. Even if it is a “coffee-flavored drink”, there is a process for people to accept it. In addition, there are many brands of affordable fruit drinks in the sinking market, and the repurchase rate of coffee needs to be further verified.

Michelle Ice City doesn’t seem to be worried about these doubts. Its director and general manager Zhang Hongfu once said that what Lucky Coffee wants to do is to replicate a coffee version of “Misue Bingcheng” within five years, which basically reflects the company’s conservative estimate of the future penetration rate of the coffee market.

But from another perspective, the sinking of coffee brands is also in the education market. Once the user habits are cultivated, huge potential may burst out, which is the reward given by the market to the pioneers.

This article is reproduced from: http://finance.sina.com.cn/tech/csj/2022-09-02/doc-imqmmtha5638710.shtml
This site is for inclusion only, and the copyright belongs to the original author.