The figure is a visualization system with multiple views, which is used to help explore the travel trajectories of the four poets in the Song Dynasty at various stages of their lives, as well as literary creations, analyzing the poets’ lives from multiple perspectives. The visualization system can be placed in scenes such as museums as a visualization case for the general public. Utilize its highly interactive and rich content to help the public understand relevant domain knowledge in a unique format. 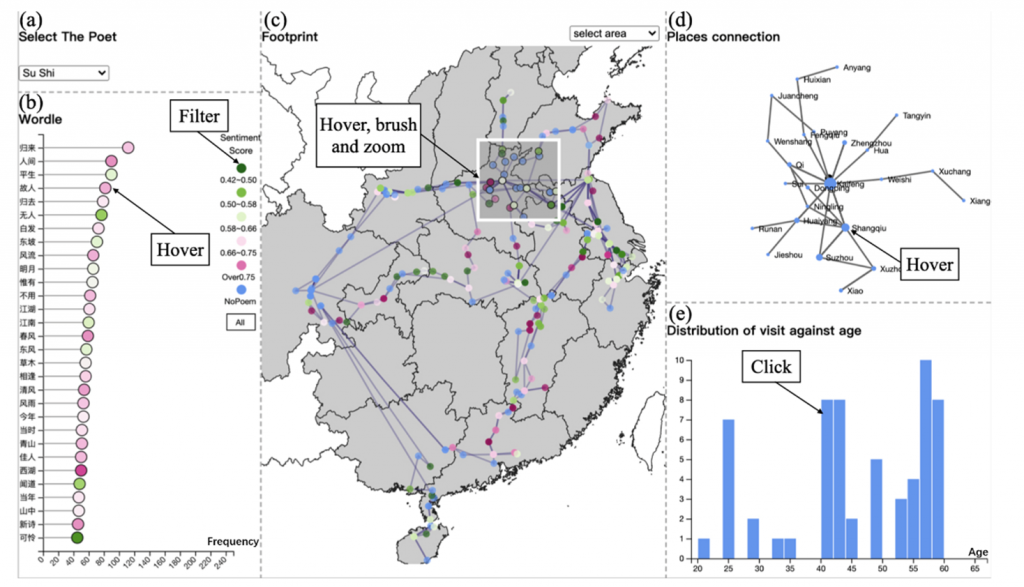 In this way, a single interaction can be turned into an interaction log in JSON format and further encoded into a vector for use in machine learning models. In addition, the encoding of the data displayed by the visualization can be understood as the encoding of the information on each view. The information involved in the view is disassembled, reorganized into keyword vectors, and further dimensionality reduction operations are performed, which can also be converted into vectors. For example, a map view with punctuation can be transformed into a vector of the information combination of each point on the map, including the position, color, size and other information of each point. Then, dimensionality reduction is performed on the long information vector, and the tSNE algorithm is used to obtain a shorter vector for use in the machine learning model.

The scoring results of 8 statements, of which Q1-Q6 are correct statements and Q7-Q8 are false statements