After Zhengbang’s problems, pig stocks rose sharply yesterday, and Muyuan shares fell after touching the 60-day line. We have summed up some of our judgments on Muyuan shares under the current situation. We planned to make more preparations and reissue it at the end of the month, but the current situation really needs to be rushed out. The reason for reposting at the end of June is that last year we made a judgment about the year from 21.6 to 22.6, which was verified when we thought about it, but it is basically fulfilled now. We left Qingmuyuan in May of last year, and started to buy back a small amount in May this year. At the same time, we published two articles in October and December last year, which were also quite controversial and the arguments were confirmed one by one. The original reason for the long article in October last year was to refute the article about Muyuan by X Bang 123, which was influential at the time. Later, the issue stopped on its own.

A judgment on the price of pigs:

The core point of the post on pig prices in the third quarter of last year is that it will not recover until the fourth quarter of this year or the first quarter of next year, even if the recovery will never return to the 30-40 yuan segment. Currently maintaining this view, we believe that the pig cycle and the inflation cycle are positively correlated, and the pig cycle slightly runs ahead of inflation.

In several rounds of pig cycles, only the 19-20-year hyper-expansion cycle is not related to inflation, and it is also accompanied by the subsequent slump. The situation at the time was rather special. Before the price of pigs increased, the production capacity was due to the strong deconversion for well-known reasons. The data that my friend helped me to check could be reduced to 20.29 million by the end of 2019. It can be seen from the above figure that pig prices have only fallen to a historically reasonable range this year, and the historical lows are gradually rising. With inflation expectations and production materials, the rise in labor prices will gradually be passed on to the terminal. Therefore, when inflation is expected to come, we can expect the price of pigs to rise again and this time point may also start in the fourth quarter of this year. Although we believe that the price of pigs will enter the rising range, we should not expect the price of pigs to return to the range of 30-40 yuan in the last abnormal cycle. The reason is that the reduction of production capacity is not ideal. At present, the decline in fertility is very slow and it has risen in May. The national inventory still maintains more than 40 million heads and the decline is not obvious. When demand is relatively stable and supply does not decline significantly, price increases are actually caused by inflation transmission rather than supply and demand imbalances. The current situation is that the price of pigs cannot go down, because the state purchases and reserves the bottom line. Although the purchase and storage have been passed down again and again, the policy signal that the state insists on carrying out is very obvious. The price increase may be 20 yuan in the 4/1 quarter but not necessarily 25 yuan. Judging from the pattern of the pig cycle in the picture above, the price of pigs is mostly W-shaped at the bottom before each cycle goes up. At present, W has not yet been formed. Simply look at the sales price of Muyuan, from 17 yuan in May last year to 11.46 yuan in September to 15.96 yuan in November, and 14.87 yuan in May this year. In one year, the W-shaped reversal is almost completed, and in June and July, it can break through the 17 yuan in May last year to complete the W-shaped reversal at the bottom. This is our basic judgment on the price of pigs, and we need to continue to observe. If it exceeds 17 yuan, it will form an ascending channel, but why is it unlikely that it will rise sharply like the previous round? In terms of Nengfan, according to the notice of the “Implementation Plan for the Control of Live Pig Production Capacity (Interim)” issued by the Ministry of Agriculture and Rural Affairs, during the “14th Five-Year Plan” period, the production data of the national pork production in normal years when the output is 55 million tons will be used as a reference to set Nengfan. The normal population of sows is stable at around 41 million, and the minimum population is no less than 37 million. Therefore, the ability to reproduce has reached the standard desired by the state, which is the basic guarantee to control the price of pigs from rising sharply and thus affect the CPI. Furthermore, after a three-year period of frantic expansion of production capacity of large-scale enterprises, the cost of retail investors is lower than the full cost of large-scale pig enterprises. In addition, retail investors do not have the pressure of fees and credit, so the current pig price may already be profitable. In this way, retail investors increase their reserves and supply, and the pressure is on the large-scale pig enterprises. 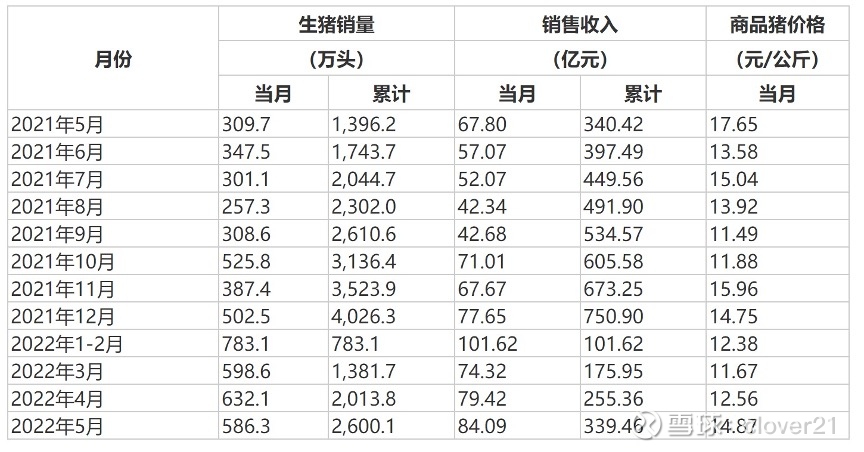 This picture shows that the low W-type of pig prices is taking shape, but the top 30 pig enterprises in the April statistics can reproduce a total of 9.405 million sows, accounting for 22.5% of the total number of sows in the country. That is to say, the vast majority of Nengfan is not generated by large-scale pig enterprises, and they will increase if they have profits. Therefore, don’t think that the current situation will be similar to that at the end of 2018-19. The external causes at that stage are rare in a century. We can dynamically clear the new crown, let alone swine fever.

two. About the full cost of Muyuan

Last year, I published an article that specifically questioned Muyuan’s so-called complete cost. We do not accept legends under 15, no matter how the company explains it. Different calibers cannot be compared with each other, you can first clarify the caliber. Last month, I watched Mr. Qin’s video and said that it is now 16 yuan, inflation is there, feed and labor are rising, and the growth rate of pig production capacity is slowing down, saying that the total cost is less than 15 yuan, or even 13.5 yuan Kind of like referring to a deer as a horse. We look at Muyuan’s production capacity, output, sales volume and cost level in combination. We believe that only when the price of pigs can reach more than 18 yuan can Muyuan really make money. This issue was originally planned to be elaborated in the semi-annual report, and now it will not be discussed in detail at that time.

I insist on not accepting it, and I have repeatedly emphasized that for Mu Yuan, it is reasonable and reasonable to use financial skills to see how to understand this issue. It is as inarguable as you believe in the full cost of 15 yuan. However, the issue of financial statements is under the supervision of national laws and regulations, and some content can be deferred but will always be reflected in the same way as the provision for asset impairment. Piglets are indeed their own and different from other companies, but the accrual principle of medium and large pigs, whichever is lower, depends on the trend of pig prices. The impairment of live pigs and productive materials and supplies is another situation if they must be sold off.

Regarding the issue of Muyuanliu’s liabilities and cash flow, a long article in October last year made a special comment and it is now fulfilled. Our latest opinion is that although the company has just stated that the cash flow can be balanced in 20,000 words, we think it is necessary to discuss how long Muyuan’s cash flow can last. If the price of pigs can rise at the right time, you can pass the risk, otherwise it will be more unpredictable. The main point here is that, not to mention the pressure on the short-term cash debt ratio, the company’s asset-liability ratio in the first quarter was 65%. Although it can borrow from major shareholders, it will increase the asset-liability ratio. When the asset-liability ratio continues to rise above 70%, bank credit problems will arise. That is to say, the increase in borrowings from major shareholders may not be worth the reduction in bank credit. There is no doubt that there is liquidity risk in Muyuan, and it is believed that the company has the ability and confidence to deal with it. It’s just that the appearance of a straw may crush the camel when it is already tense to the extreme. I hope this will not happen. The liquidity risk of large-scale pig enterprises exists objectively, and as the Zhengbang problem emerges, it will also greatly affect the overall credit. Muyuan will definitely lose last year’s profit in half a year, and it is not known whether it will actually achieve profitability in the second half of the year. In this way, there will be great pressure on credit and fundraising. This problem needs to be tracked very carefully, because holding a position means that once the problem is announced, it will be a disaster.

It is relatively simple. In the first half of the year, the loss of last year’s profit is expected to be between 8 billion and 10 billion; the third quarter is flat, and the fourth quarter is profitable. In total, it will lose money this year, which is the opposite of last year’s assessment that it will make a profit this year. The specific semi-annual report will be discussed later.

six. About Muyuan’s sales this year

We think sales may reach 60 million this year and 26 million by the end of May. Although the growth rate has slowed down in May, it may be because the trend of prices is seen to be under control. Then focus on head weight, which is the key to sales growth. The previous problem was that the company needed to increase the quantity because it wanted to guarantee cash flow and payment, otherwise it would not be able to meet the monthly cash flow requirements. Therefore, it can be seen that there is a problem with the average weight of the heads sold before May. If you are in a hurry to sell and the price is lower than the market, you can get better payment conditions and sell a larger quantity. The net profit margin of sales in the first quarter was -31%, and 6.32 million heads were sold in April. According to the average price of 12.56 yuan, the loss will increase. According to the monthly average of 5 million in the next seven months, the annual average should exceed 60 million, depending on how the price goes. If the price goes up, the market companies will save their lives and the market will look at the expectations for next year.

seven. About the possible cost level of Muyuan this year

Eight. Strategies for the current situation of Muyuan Stock

On the whole, it is still believed that the company can survive, but it depends on the trend of pig prices. If the price of pigs in the fourth quarter does not exceed 20 yuan, then the expectations for next year cannot be estimated. Therefore, the current strategy is to keep a small position and pay attention, and judge according to the changes of the above points. Investors in the secondary market all hope to make real profits. It is okay to hold on to the belief in the market value of Muyuan’s trillion yuan, but this concept does not mean that it can be profitable.

This topic has 7 discussions in Snowball, click to view.
Snowball is an investor’s social network, and smart investors are here.
Click to download Snowball mobile client http://xueqiu.com/xz ]]>