Please declare the source for reprinting~, this article was published on luozhiyun’s blog: https://www.luozhiyun.com/archives/667

When we learn Redis’s Hash table, we will inevitably think of other Hash table implementations in our minds, and then make a comparison. Usually if we want to design a Hash table, then we need to consider the following issues:

For Redis, first of all, it is a single-threaded working mode, so there is no need to consider concurrency issues, this question passes.

For the resolution of Hash conflict, there are usually open addressing method, re-hashing method, zipper method and so on. However, most programming languages ​​use the zipper method to implement the hash table. Its implementation complexity is not high, and the average search length is relatively short. The memory used for each storage node is dynamically allocated, which can save a lot. of storage space.

Therefore, for Redis, the zipper method is also used to solve the hash conflict. As shown below, the nodes are strung together by a linked list: 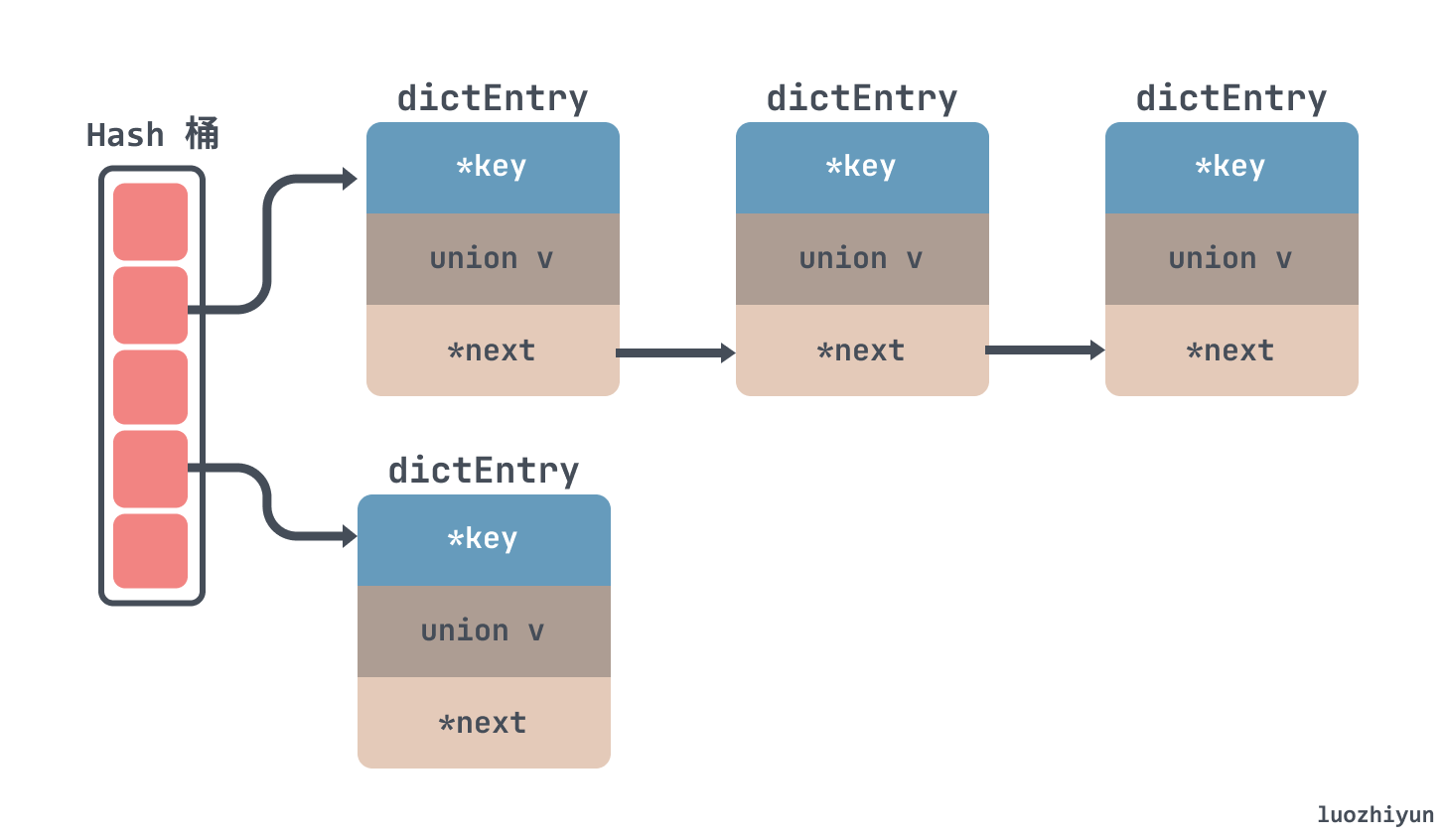 Let’s take a look at expansion. For expansion, we generally need to create a new block of memory, and then migrate the old data to the new memory block. Because this process is single-threaded, the main thread cannot be blocked for a long time when expanding. , In Redis, progressive rehash + timed rehash is used.

Progressive rehash will first determine whether the current dictionary is rehashing before performing additions, deletions, and changes. If so, rehash a node. This is actually a divide and conquer idea. By dividing the big task into small tasks, each small task only executes a small part of the data, and finally the entire large task is completed.

Timed rehash If the dict has no operation and cannot migrate data incrementally, the main thread will perform a migration operation every 100ms by default. Here, data will be migrated with 100 buckets as the basic unit at a time, and if an operation takes a timeout of 1ms, the task will end, and the migration will be triggered again next time

Redis sets two tables ht[0] and ht[1] in the structure. If the current capacity of ht[0] is 0, it will directly give 4 capacities for the first time; if it is not 0, then the capacity will be directly turned over times, and then put the new memory into ht[1] to return, and set the flag 0 to indicate that it is expanding.

The operation of migrating hash buckets will migrate one hash bucket at a time from ht[0] to ht[1] when adding, deleting, modifying and checking the hash table. After the migration and copying of all buckets, the space of ht[0] will be released. Then assign ht[1] to ht[0] , reset the size of ht[1] to 0, and set the flag 1 to indicate that the rehash is over.

For the search, in the process of rehash, because there is no concurrency problem, the search for dict will also search for ht[0] and then ht[1] in turn.

The hash implementation of Redis is mainly in the two files dict.h and dict.c.

The data structure of the hash table is roughly as follows, I will not post the code of the structure, the fields are marked on the figure: 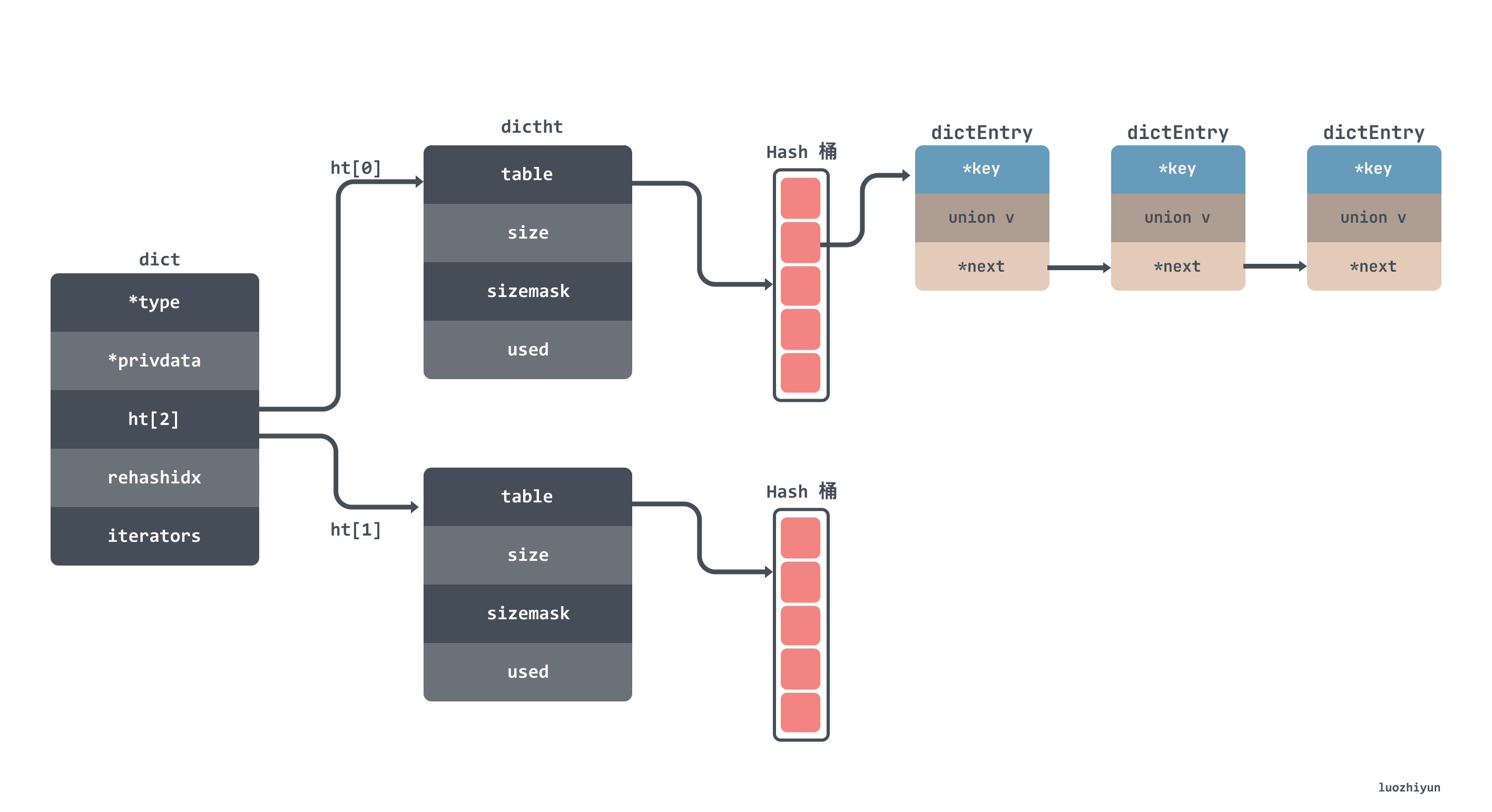 From the above figure, you can also see that there is a dictht array with a space of 2 in the hash table. This array is used to save data alternately when doing rehash. The rehashidx in the dict is used to indicate whether rehash is being performed.

When is the scaling triggered?

Many hash tables can only be expanded, but dict has both expansion and contraction in Redis.

In fact, expansion is generally to check whether a certain threshold is reached when adding elements, and then decide whether to expand. So after searching, you can see that adding an element will call the function dictAddRaw , and we can also know that it is the underlying function of add or lookup through the annotation of the function.

This function adds the entry but instead of setting a value returns the dictEntry structure to the user, that will make sure to fill the value field as he wishes.

The dicAddRaw function will call the _dictKeyIndex function, which will call _dictExpandIfNeeded to determine whether expansion is required.

_dictExpandIfNeeded function determines that there are roughly three situations in which expansion will occur:

The load factor of the hash table can be calculated by the formula:

For example, for a hash table of size 4 containing 4 key-value pairs, the load factor for the hash table is:

For another example, for a hash table with a size of 512 and containing 256 key-value pairs, the load factor of this hash table is:

Why should it be judged whether it should be expanded based on the combined load factor of rdb or aof operations? In fact, it is also mentioned in the comments of the source code:

as we use copy-on-write and don’t want to move too much memory around when there is a child performing saving operations.

We have finished the logic, let’s take a look at the source code:

From the above source code, we can know that if the size of the used space of the current table is size, then the table will be expanded to the size of size*2. The new dict hash table is created by dictExpand.

This piece of code is still relatively clear, you can follow the comments above to look at it a little bit.

After talking about expansion, let’s take a look at shrinking. Students who are familiar with Redis know that in Redis, one is lazy deletion for cleaning expired data, and the other is regular deletion. In fact, shrinking is also done in regular deletion.

The same dictResize function will also judge whether rehash is being executed and whether dict_can_resize is performing copy on write operation. Then reduce the bucket size of the hash table to the same size as the key-value pair:

Finally, call dictExpand to create a new space and assign it to ht[1].

How does data migration work?

We also mentioned above that, whether it is expansion or contraction, the new space created will be assigned to ht[1] for data migration. Then perform data migration in two places, one is triggered when adding, deleting, modifying and checking the hash table, and the other is triggered regularly

Triggered when adding, deleting, modifying, and querying the hash table

If you are interested, you can take a look at the following source code, which has been marked with comments:

The timing trigger is triggered by the databasesCron function. This function will run every 100ms , and will eventually call the dictRehash function mentioned above through the dictRehashMilliseconds function.

The ms parameter passed in by the dictRehashMilliseconds function indicates how long it can run. The default is 1, that is, the function will exit after running for 1ms:

When calling the dictRehash function, 100 buckets will be migrated each time.

The reason why I want to talk about the implementation of the hash table is because the dict data structure is used in all scenarios that require O(1) time to obtain kv data in Redis. In this article, we can clearly understand how Redis’s kv storage stores data, when it expands, and how the expansion migrates data.

When reading this article, you may wish to compare how the hash table is implemented in the language you use.

This article is reproduced from: https://www.luozhiyun.com/archives/667
Love reading is only for inclusion, and the copyright belongs to the original author.