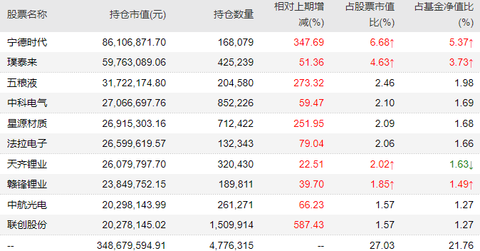 In the three-year A of the new fund Cinda Aoyinzhiyuan he issued this year, Wuliangye and Kweichow Moutai entered the top ten heavyweight stocks at the same time. 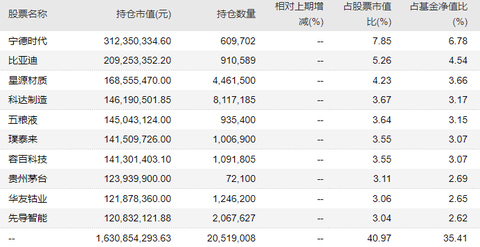 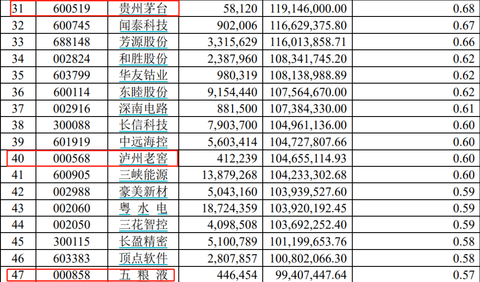 So, why did Feng Mingyuan buy liquor?

In a quarterly report, Feng Mingyuan did not disclose the reason for buying liquor.

But in an early interview, the host asked Feng Mingyuan a question:

Which industry are you optimistic about in the long run?

Feng Mingyuan’s answer is not technology, semiconductors and new energy, but liquor.

Do you know what is the origin of human drinking?

In ancient times, people threw leftover rice and things with starch or sugar into a garbage heap, or a heap of leaves, and it fermented there.

After fermentation, it becomes wine, the aroma of wine wafts out, and the leaves are drunk as soon as they are filled. This kind of wine is quite delicious, so the history of wine is very long.

I don’t know if you have heard the story of monkeys making wine. There was a woodcutter in ancient times. When he went hunting in the mountains, he would go to the monkey cave to find wine.

Because the monkey can make wine, the monkey will pick a lot of fruit and put it in its hole. When the weather is hot, the inside of the hole is hot, and it will ferment in it. After fermentation, it will become fruit wine.

In the past, the woodcutter would go to the monkey cave to drink the wine, which is the monkey wine.

So like wine is a particularly good thing, it has been around since the primitive times, so the long-term optimistic is still liquor.

Because this thing is a real orderly cash flow, that is, it will always exist, and it will exist from the beginning of mankind to the present.

And Feng Mingyuan began to buy a box of Moutai every year from 16 or 17 years.

“Historically, it’s also been a very solid investment, just not a good sell.

But after buying it, from the market price point of view, it is indeed making money.

For example, three or five years ago, I remember that Maotai was bought for more than 1,000 yuan at that time. You see, it has risen to more than 3,000 yuan now. In fact, it made a lot of money. “

Recently, with the adjustment of liquor, there are many voices looking at white liquor.

Behind the splendid performance of the liquor sector in the first quarter is fake prosperity.

Because under the epidemic, people’s consumption frequency, consumption ability and willingness to consume are very unsatisfactory. The liquor sold by liquor companies has actually become the inventory of channel distributors and has not been sold.

Then, dealers have absolutely no motivation to continue to buy goods. If consumption continues to be sluggish, then the future growth of liquor will be worrying, and it will not be able to support the current high valuation. 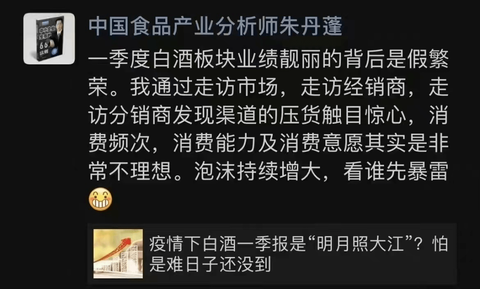 In the short term, the objective pressure of baijiu does exist, and it is not a good choice for players who are chasing prosperity on a quarterly basis.

But in the long run, the core factor that determines the long-term intrinsic value of stocks is the business model, and high-end liquor is the best business in China, no one.

Tian Yu from Zhongtai Asset Management once explained from the purchase behavior of consumers:

Most of the consumption scenarios of high-end liquor are banquets, and wine is an important tool to quickly enhance the atmosphere during this period.

In many occasions, the grade of wine is also considered to be a reflection of the importance of the dinner party to the guests, which produces an important condition for good business of consumer goods – the separation of buyers and users. Its impact on buying behavior is decisive.

Such an agency relationship will make buyers’ subjective feelings about product experience less important, and the general opinion of the public is an important basis for purchasing decisions.

In this way, products that occupy consumers’ mental space will have strong bargaining power in terms of price. Their pricing model is not cost-plus, and usually has a very high gross profit margin.

Of course, just meeting this point is not the best business. The difficulty is to occupy the mental space stably.

A profitable business will naturally attract a large number of competitors, and products that cannot produce stable and differentiated products will spend huge amounts of money to maintain the brand and consumer awareness, resulting in limited profitability.

At the same time, the limited output and the scarcity of commodities make the brand building based on unique historical culture and consumers’ cognition form a cumulative effect (increase each other), rather than crowding out each other,

The annual sales expenses gradually accumulate into hidden brand assets, and the company’s moat is dug deeper and deeper, and it has truly become a friend of “time”.

The Chinese wine culture has a long history and has the widest audience base. High-end liquor is difficult to be subverted due to the unrepeatable production factors and unique brand culture. In the foreseeable future, it will be the best representative of the guests.

And I am convinced that the epidemic will eventually pass, and the current downward pressure on the economy is only temporary. I remain optimistic about the long-term prospects of China’s economy, and I firmly believe that China’s economic strength will eventually reach the level of developed countries.

If you look at one year, consumption downgrade is right; but if you look at ten years, whether things are good or not is the core contradiction.

Therefore, as long as high-end liquor dares to fall to a reasonable valuation, such as Maotai falling to 30 times its valuation, then I will dare to buy it.

There are 21 discussions on this topic in Snowball, click to view.
Snowball is an investor’s social network, and smart investors are here.
Click to download Snowball mobile client http://xueqiu.com/xz ]]>