Google’s parent company Alphabet released its first-quarter 2022 financial report in the early morning of April 27, Beijing time. Although Google’s performance this time is basically up to standard, it has always exceeded expectations in the past. This time, it did not bring any surprises, but was disappointing.

The slump marks a departure from years of massive success in the tech industry, which has enjoyed huge gains for much of the pandemic.

As the Fed ramps up its inflation fight, interest rates will rise, and traders are increasingly reluctant to pay the exorbitant prices they pay for Microsoft, Meta and others. In this context, it may be very difficult for Google to rise as much as it has in the past two years.

Google’s parent company $Google-C (GOOG.US)$ released its first-quarter 2022 financial report in the early morning of April 27, Beijing time, showing that advertising revenue in the Middle East, Africa, and Europe slowed down, and the performance of its YouTube was not good. It is rare that a number of its performance data have fallen short of market expectations.

Looking at Google’s overall performance, the company posted total revenue of $68.01 billion in the first quarter, up 23% year-over-year and the tech giant’s slowest increase since the end of 2020. In 2021, the company saw a period of big sales growth as businesses large and small flooded into the advertising market seeking to win over customers who were locked in their homes early in the pandemic. The company’s sales rose 41% last year. Net profit was $16.4 billion, down 8.3% year-on-year; earnings per share were $24.62, lower than analysts’ average estimate of $25.71. Excluding compensation paid to distribution partners, the company’s total Q1 revenue was $56 billion, up 20% year-over-year, but below analysts’ average estimate of $56.1 billion. 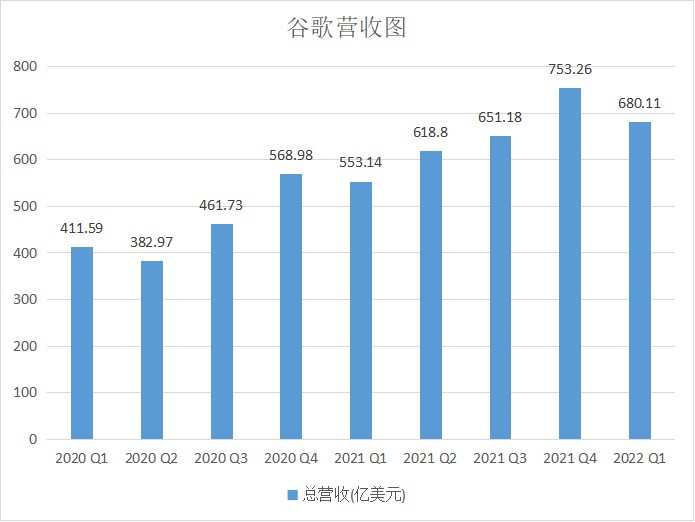 Although Google still achieved double-digit growth in total revenue this quarter, the growth rate was much slower than the 32% year-on-year growth rate in the previous quarter, and the slowdown in revenue growth is a certainty.

Advertising revenue continues to rise, and the slowdown in growth cannot be underestimated

Global economic turmoil has disrupted digital ad spending, which has slowed after a pandemic-fueled high. But the company reported that ad revenue still reached $54.66 billion in the quarter, up from $44.68 billion in the same quarter last year, up 22% year over year but down nearly 11% sequentially.

The advertising business revenue on the search engine increased to US$39.6 billion, an increase of 24%, which was higher than market expectations. In addition to continuing to benefit from the new iOS privacy policy, the advertising business was also strongly repaired by industries such as tourism and automobiles after the epidemic.

Google CEO Sundar Pichai called the core search results strong and said it reflected the way people and businesses were going through digital transformation. “We will continue to invest in great products and services and create opportunities for our partners and local communities around the world.”

While analysts say YouTube’s more than 2 billion monthly users are spending more time on the platform, its ad revenue took a hit in the quarter to just 6.87 billion as users gradually returned to face-to-face life as the pandemic improved. U.S. dollars, well below expectations of $7.5 billion. Google’s report acknowledged serious missteps in its YouTube business, in part due to increased competition with short-video platform TikTok and advertisers’ response to high inflation.

The company attributed its failure on YouTube in part to the Russian-Ukrainian war. In recent months, Google has suspended all monetization of YouTube channels outside Russia and blocked some state media to combat misinformation. In addition, Google has said in previous quarters that Apple’s (AAPL.US) privacy changes have limited the ability of third-party software to target ads among users, thereby limiting some of YouTube’s business on the iPhone side.

In a conference call with investors on Wednesday, Pichai said YouTube’s viewership and customer base are growing, and expressed optimism for the future. “In the long run, for me, YouTube is a place that users use not only for entertainment, but also for finding information.” 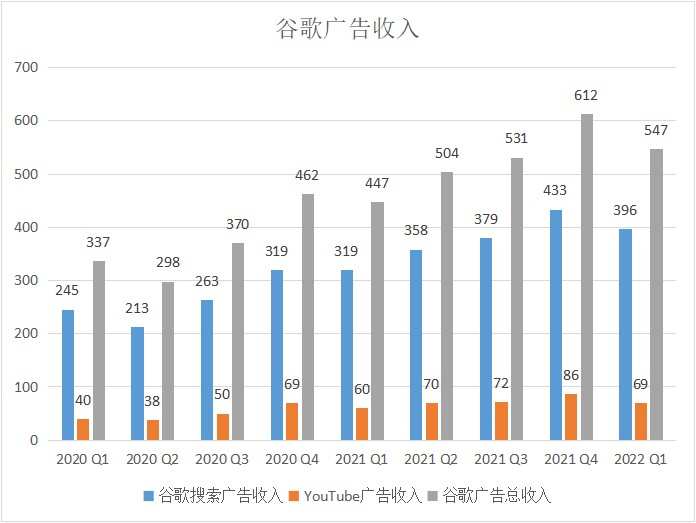 Although Google’s advertising business still achieved impressive growth this quarter, it has to face a practical problem. As a company that benefits from the epidemic, as the epidemic eases, the growth rate of advertising revenue will slow down. Traffic acquisition costs, a measure of how much Google must spend to acquire web traffic, jumped 23 percent to $11.99 billion, compared with analysts’ expectations of $11.7 billion, according to FactSet. The results largely confirm that momentum in online advertising has slowed as the global economy emerges from the Covid-19 pandemic.

Also, during the quarter, Google halted most of its operations in Russia due to the outbreak of a geopolitical conflict between Russia and Ukraine. Revenue growth in the Middle East, Africa, and Europe region slowed to 19% in the first quarter from 33% in the same period last year, dragging down advertising growth to some extent.

Google’s cloud business performed well in the quarter, with revenue of $5.8 billion in the first quarter, slightly above expectations of $5.76 billion and up year-over-year as more large enterprises move workloads from their own data centers 44%, the growth rate has not slowed down, which is tantamount to giving the market a reassurance.

Google has been lagging behind Amazon (AMZN.US) and Microsoft (MSFT.US) in cloud business development. Compared with the two industry giants, its revenue scale is not on the same order of magnitude, and it has not yet achieved profitability. While the cloud division is still losing money, with an operating loss of $931 million compared to $974 million in the year-ago quarter, the cloud service’s margin situation improved after a worsening last quarter compared to the fourth quarter of 2021.

Note: Since Amazon’s financial report will be announced on the morning of April 29, 2022 Q1 AWS revenue is temporarily unavailable

However, the core advantage of Google Cloud lies in the technical deployment of machine learning and network security. In addition, Google Cloud can also be sold together with other Internet products under Google, thereby increasing the scale of revenue.

Today, Microsoft announced its financial report. The data shows that Microsoft’s rival Azure recorded a 46% growth, and Amazon’s AWS, which will report earnings on Friday, is also expected to achieve impressive growth. Google Cloud’s catch-up appears to be overtaking especially hard. In the first quarter, Google Cloud tried to further expand its competitiveness by launching new products and deepening its relationship with partners.

In March, Google announced plans to acquire Mandiant (MNDT.US), a cybersecurity company, for $5.4 billion, the second-largest acquisition in Google’s history. Expansion is smoother. However, as one of the main targets of antitrust, the U.S. Department of Justice has not yet approved the acquisition. On April 20, it requested Google and Mandiant to submit additional information.

The growth of other services slowed down, and the impact of the new Google Play policy began to appear

Google’s other revenue segment, which includes hardware, Play Store and non-advertising YouTube revenue, was $6.81 billion, slightly higher than the same period a year ago, with year-over-year growth slowing sharply to a single-digit level of 5%, compared with quarterly growth in the past two years. in the 20%-30% range.

In addition to the impact of the suspension of business in Russia, the new Google Play sharing policy officially implemented this year is also a major factor. In October last year, Google announced that starting in 2022, it will cut the subscription payment share from 30% to 15%, and the share rate of e-books and music streaming media can even enjoy a 10% discount. The data shows that in this regard, Google’s potential revenue loss in 2022 is between 1.6-2 billion yuan.

The growth of innovative business has doubled, and the future can be expected

As the smallest innovative business, Google has always been regarded as an investment in future front-end technology. Although Google has no performance requirements for the division called Other Bets (including its life sciences company and self-driving car division Waymo), the Segment revenue nearly doubled to $440 million compared to the same period in 2021, a significant improvement over previous years. While investors don’t need to pay too much attention to this sector in the short to medium term, it has great prospects in the long term.

Although Google’s performance this time is basically up to standard, it has always exceeded expectations in the past. This time, it did not bring any surprises, but was disappointing. Moreover, the market was based on emergencies in the first quarter and various disadvantages, namely, the Russian-Ukrainian friction, High inflation, etc., have lowered the previous expectations in the last month. In addition, the negative impact of the suspension of the Russian business (announced on 3.10) due to the friction between Russia and Ukraine will also be more fully reflected in the second quarter results.

While Google’s stock is down more than 17% this year as of Tuesday, it has risen nearly 90% over the past two years. The company’s disappointing results followed a drop in big tech stocks that sent the Nasdaq Composite down 4% on Tuesday, the biggest drop for the tech-heavy index since September 2020.

The slump marks a departure from years of massive success in the tech industry, which has enjoyed huge gains for much of the pandemic. As the Fed ramps up its inflation fight, interest rates will rise, and traders are increasingly reluctant to pay the exorbitant prices they pay for Microsoft, Meta and others. In this context, it may be very difficult for Google to rise as much as it has in the past two years.

This article is reprinted from: https://news.futunn.com/post/14934474?src=3&report_type=market&report_id=204195&futusource=news_headline_list
This site is for inclusion only, and the copyright belongs to the original author.