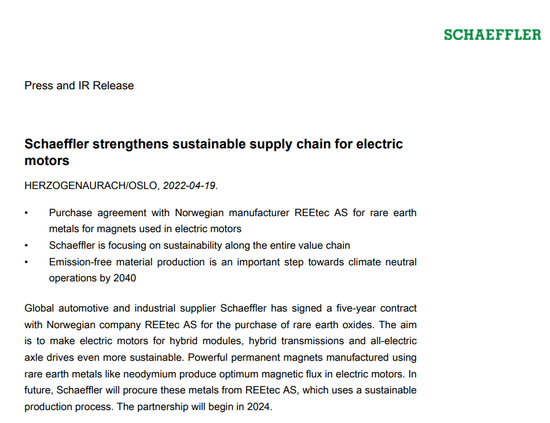 This agreement is also the first time in public reports that European auto suppliers or car manufacturers purchase rare earths from Europe. As the fifth largest auto parts manufacturer in Germany, Schaeffler itself is also a leader in the field of bearings, supplying components for Volkswagen, GM, Toyota and other car manufacturers.

Schaeffler Chief Operating Officer Andreas Schick said that the company’s supply agreement with REEtec will start in 2024. At present, the company is rapidly transforming into an electric vehicle supplier, so in terms of rare earths, it cannot only rely on an industry-standard supply chain, but also needs suppliers from Europe.

In recent years, car manufacturers have repeatedly extended their hands to upstream miners, especially battery materials such as lithium and nickel, but there have been few actions in the rare earth sector. At present, the European Union, the United Kingdom and the United States are eager to establish local supply chains of rare earths and magnets. According to media statistics, 98% of the permanent magnets currently needed in the European market are imported from Chinese suppliers.

It needs to be explained that rare earth materials themselves are not rare, but the processing process is very complicated and produces toxic waste. Manufacturers need to separate the ore into 17 individual elements, which are then used to produce alloys for a range of electronics and electric vehicles.

Sweden’s REEtec’s main selling point is that the production line consumes less energy and that almost all chemicals used in processing are recovered and reused. The company launched a demonstration plant in 2019, and the lock on the new contract will help the company build a commercial separation facility, with the raw materials needed for the company’s production coming from Canada’s Vital Metals.

However, what Schaeffler and REEtec have not made clear is how much rare earth will be supplied in this agreement, and the corresponding cost. Schick also didn’t answer the question directly, saying only that it’s a challenge from a business perspective, but it’s the company’s commitment to sustainability.

According to the financial report, Schaeffler’s electric mobility business received a total of 3.2 billion euros of orders last year, much higher than the earlier forecast of 1.5-2 billion euros, of which nearly a third of the orders came from the automotive technology sector.

This article is reprinted from: https://news.futunn.com/post/14698674?src=3&report_type=market&report_id=203560&futusource=news_headline_list
This site is for inclusion only, and the copyright belongs to the original author.