There used to be such a company that only produced three works in ten years, two later (enhanced version), and countless transplanted versions. With such a low production capacity, it is still enough to rely on one work to be in the “Menghe”. Department of Game Awards 2016″ won the semi-grand prize and the script gold award, and also won the “Beautiful Girl Game Awards 2016” organized by Getchu. 8th in the music department, 7th in the film department, and 3rd in the character department.

Four years later, after officially winning the “Cute Game Awards 2020”, he wrote a disbandment declaration in the acceptance speech. That’s right, this company is the LOSE company that once produced “Falling in Love with the Train”. One thing to say, I actually prefer Donadona

LOSE is a production team under the parent company ボーントゥ specializing in the production of text adventure games (that is, GALGAME). Since its creation, there have only been three works that can be regarded as completely new.

Its earliest work is “Gothic Delusion”, which was released in 10 years. The characters in this work are well-shaped, the male protagonist has a clear growth line, the plot is compact and exciting, the battle performance is gorgeous, and the world view is shaped quite distinctively. If you only hear this, you may exclaim: Isn’t this a masterpiece?

But in fact, this work is really too short, just laid the groundwork ahead, the male protagonist has also grown up, the plot has entered a climax, the players are also burning up, and then it ends suddenly… Players are looking forward to it. After the follow-up “Gothic Delusion 2”, the LOSE official said that it was too expensive to make this thing, and it was released directly in the form of a novel. This work has finally come to an end in this form. Next is LOSE’s second work, “Monobeno-“, which was released in April 2012.

In October 2013, this work also launched “Mao Shen Qi Tan -happy end-“, which is a new follow-up story and memoir based on the original story of the original work, and the ending has been adjusted a little. ( In less than a year, the mysterious patch was released ten times in a row, adding a total of more than 100 indescribable scenes, which is staggering. )

I don’t need to go into details about the quality and popularity of this work. After all, let’s not talk about anything else. As one of the works that successfully entered STEAM through an agency in the early days and also comes with official Chinese, the GAL circle in China will not be surprised. to a lot of popularity. The production and script of this work are also excellent, and its BGM also won the silver award in the music group of the 2014 Cute Game Awards. On the whole, it can be regarded as a good cute GALGAME. 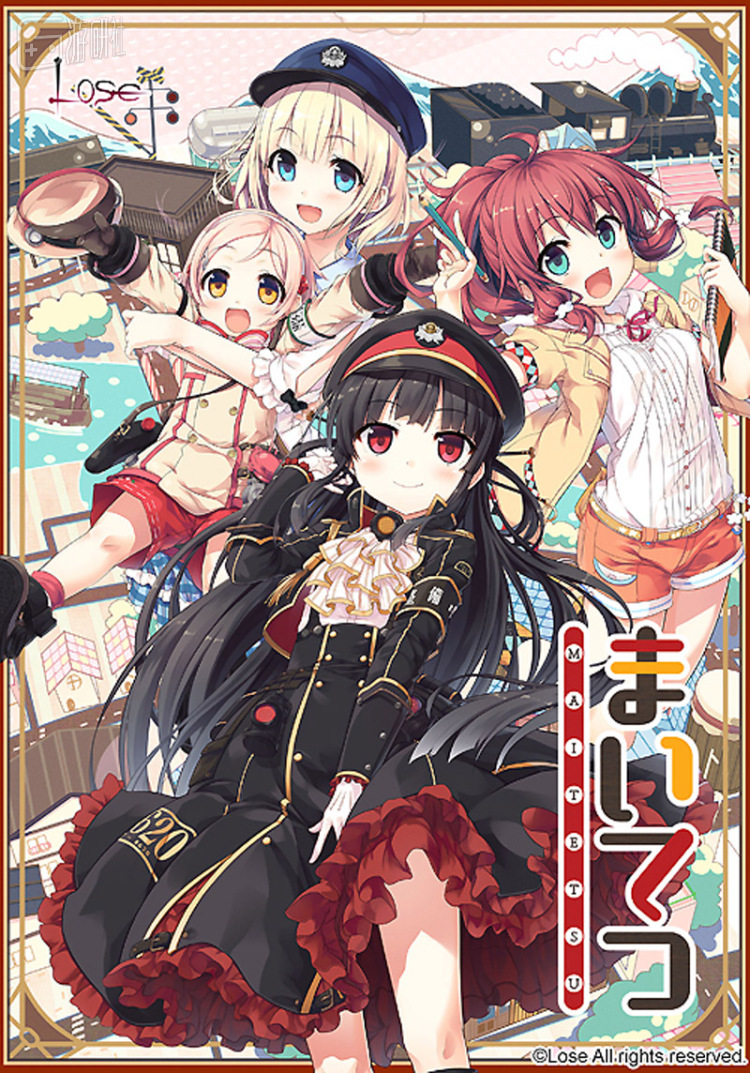 This work continues the consistent excellent production of LOSE. In this work, the excellent art style, cute character design, vertical drawings and event CGs that enhance dynamic performance through E-mote technology, and TIPS that specifically explain railway terminology. Once launched, it was widely praised by Japanese players.

In 2018, the crowdfunding project of “Falling in Love with the Train” Chinese special edition issued through the agency of HIKARI_FIELD was not optimistic when it was launched, but only 1,020 fans raised 1,060,858.3 yuan in sponsorship for the project. 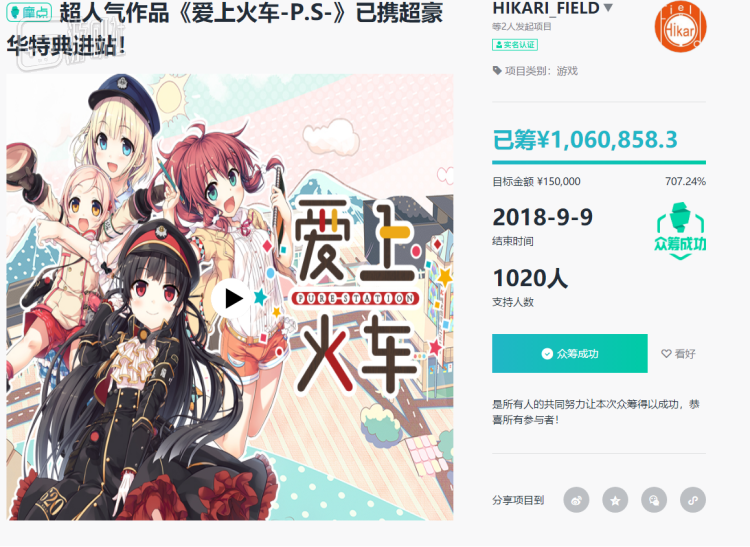 The great success of the crowdfunding project not only quickly promoted the localization of “Falling in Love with Train” and the registration of STEAM work, but also successfully made the Japanese side feel the enthusiasm of Chinese players. The enhanced version of the new work will add a Chinese background train character.

In order to fulfill the promise, the Japanese side dispatched the script in charge of the main creative team to conduct a field inspection in China. They traveled through Beijing, Chengdu and other places to visit the only one-inch-track steam train in China that is currently in normal operation – Jiayang Small Train. train. The project of “Falling in Love with Trains” has been well received both in Japan and China. The prototype of the character Ba Liu and the steam train No. 8620 represented in the “Falling in Love with Train” series is the “SL” located in Hitoyoshi City, Kumamoto Prefecture, Japan. Hitoyoshi” steam train, and the story also borrowed the real location as the background, not only some fans went to visit the parade spontaneously, but the main creative team of the game also cooperated with the local to hold the “Hitoyoshi まいてつ Festival”, attracting Many enthusiasts went to play and promoted the development of local tourism. Immediately after the release of the work, animation and manga plans were launched. There will be a series of peripheral plans and radio drama plans in the follow-up, which can be said to be smooth sailing. The enhanced version of “Falling in Love with Trains -Last Run-” released in 2020 has won the highest award in the Cute Game Awards. Just when the scenery is good. Why did LOSE choose to disband? This has to mention a series of influences after the release of the Chinese version.

Here is the first popular science, there is a so-called “the most reliable rating website in the GAL circle” in Japan – エロゲー Criticism Space, there are many Japanese players who will choose games based on the ratings of the criticism space. And on such a site, an incident happened.

A week after the release of “Fall in Love with Train-Last Run-“, a large number of high-scoring comments appeared under the entry “Fall in Love with Train-Last Run-” in the Critic Space, with names apparently composed of Chinese pinyin mixed in. , and even names such as “yangguo”, “qiaofeng”, “hongqigong” and other martial arts novels appeared. This move aroused the dissatisfaction of Japanese players, so Japanese players also began to form groups to brush up low-score evaluations to fight . But this is not the worst case. The administrator of the criticism space deleted a large number of high-scoring reviews on November 9, which also caused the score of “Last Run-” to plummet to 60. point.

On November 22, at the request of the LOSE official, the Critic Space deleted the entries of all related works of LOSE. This hand-controlling operation directly led to Lose being severely criticized by users, accusing it of interfering with the scoring website. Under a lot of criticism from netizens, Lose issued a statement to apologize, and contacted the criticism space to restore the data. The statement stated that the official LOSE agency believes that whether it is praise or criticism, the official should not interfere too much, and there has never been a request for the website to delete comments before this comment deletion incident. However, the starting point of the request for the deletion of comments this time is to consider that the LR in love with the train has been released in many regions, and these polarized comments and debates have caused a confrontation between players. Therefore, the website was asked to delete all entries of the relevant works.

However, this statement obviously does not satisfy the players. Players generally believe that if the official intervention of the scoring website is a precedent, it will greatly damage the public opinion environment of the entire industry.

After the Critic Space Censorship incident, although some of the related works of the LOSE Club have been restored, the fact that the word of mouth has been corrupted has been overwhelmed. At that time, there were rumors that the LOSE Club might be disbanded. The subsequent news about stopping the production of new works seems to directly confirm the news of the dissolution of LOSE. Until 2021, the official finally officially released the news of the dissolution of LOSE.

This is LOSE’s last event.

However, although LOSE has been disbanded and will not continue to do GALGAME, in fact, it will continue to make ASMR. On December 15, 2018, the new project Yao no Nostalgia Tan (Japanese: あやかし銷混混Tan) was released as a sound work, on DLsite release. The voices cover almost all the female characters in the Mao Shen Qi Tan series. In addition to this there is also a series of original sounds (which are much better sellers than the GAL) .

The GAL market in Japan has also been shrinking in recent years, and the impact of the epidemic has hit the industry even more. In the past few years, ELF, Light, Minori, and Feng have also closed down one after another. In August, they were engaged in page games. , Grapefruit is adjusting the voice, KEY is making mobile games, and everyone has a bright future. This time, it was only after seeing the news of LOSE’s last concert that I remembered and cherished the memory of LOSE.

But there is no need to be overly pessimistic about the industry now. Whether it is the super-magical performance of “ヘンタイ・プリズン” at the beginning of this year, Qruppo, as a rising rookie company, has successfully conquered me with only three films, or the “ジュエリー・ハーツ” of Cabbage Club.・アカデミア-We will wing wonder world-” successfully used 25 hours of wonderful mainline, one after another foreshadowing and reversal, and one sword after another, successfully combining myth, history, and race into a grand Fantasy story. In the second half of the year, Fushe’s new work “The Moment of Cherry Blossom” and “Black Sheep Town” with a bad account are also worth looking forward to. 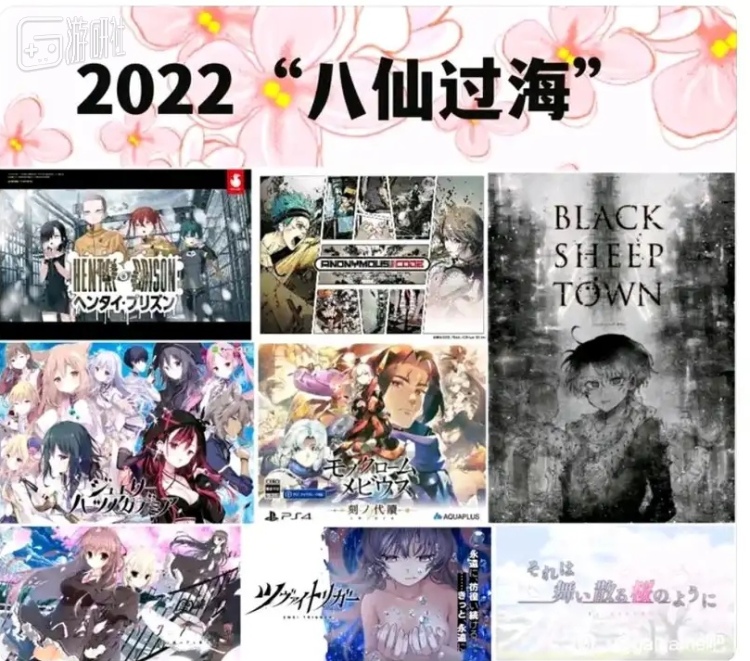 Mixed into an RPG, but don’t care

I still wish the GAL industry to get better and better. (How can I live without you)

This article is reprinted from: https://www.yystv.cn/p/9639
This site is for inclusion only, and the copyright belongs to the original author.