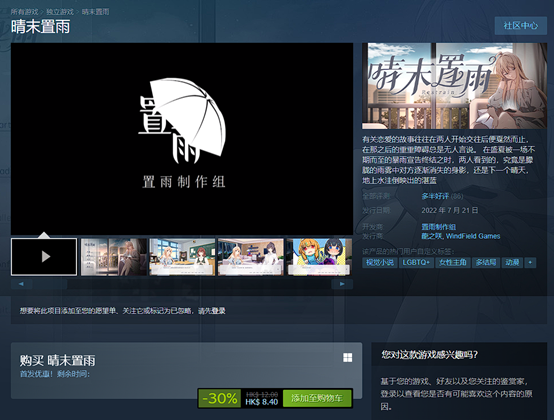 When I was 19 years old, I first had the idea of ​​making an indie game, but at that time I didn’t know what kind of game it should be. Then one day, in a game exchange group, everyone was chatting about their work and studies, and someone proposed to make a fan game together. At that time, I didn’t participate in the discussion because I didn’t know anything, but this gave I have a new idea: “How about making an AVG?”.

After that, I learned about AVG’s production staff composition and technical knowledge, and I also thought about some topics. However, because I had to deal with self-introduction, I didn’t have any funds, and I didn’t know the artists, screenwriters and other important production staff in the development of AVG, so I put it on hold for the time being.

The time has come to 2021, and I have enough personal time and energy to deal with the self-recruitment. I remembered the fan game mentioned earlier. Since its release a few months ago, the game has gained almost all fans of the original work. Praise, a little interested and want to download and play. So I found the main reminder of that game in the list – cheese silk, got the official website address of the game and played it after downloading it. Speaking of this, everyone may know that the fan game is “Xianzhuan_MisrepresentLove”. After I played Xianzhuan, I liked the script of the cheese silk very much. When I was chatting, I talked about my plan to do AVG, and the cheese silk happened to have the intention to make an original game. I took advantage of the situation and talked about my plan. White cheese for the script. After White Cheese agreed, I also started writing the project and preparing the funds.

Speaking of funds, although I have been deliberately saving money in the past few years, the funds for game development are definitely not enough. This was a very troublesome problem at the beginning of production, and I also thought of a temporary solution: go out work to earn a living. At that time, I worked at KFC for a few months, and I temporarily earned a little money to use as development funds before leaving. Unfortunately, I didn’t take into account the need for such a large budget to develop games at that time. I knew that I would work for a few more months.

After I left, I started to write a plan. The original plan was an orthopedic lily, but because I didn’t seriously consider the achievability of that plan, I was called back by myself. When I was thinking of a new project, I thought that most of the current lily works focus on describing the process of two people meeting and falling in love, and the various problems that may arise after falling in love are basically not discussed. I think this may be very novel. The theme, I wrote this plan, and the cheese silk was also very interested, so it was settled. Cheese quickly wrote the outline of the script, and after several rounds of revisions, she quickly wrote the official script. After that, she was responsible for almost all the text content of the production team, including promotional copy, achievement packaging, and song naming. I also determined the required art and music materials based on the official script.

Vertical painting and CG are also a very important part of AVG, so I put most of the budget on art resources at that time. Bai Cheese met Jigu at a comic exhibition, which is the CG artist and the CG artist of “Rain at the End of the Day”, but at first we only talked to Jigu about the CG drawing, and the CG was created by me on the Internet The contacted artist Xingxing Puding is in charge, that is, the first version of the vertical painting that everyone saw in the first publicity of our production team:

Xingxing Pudding was a very powerful painter, but because the funds at that time were very limited, the style of painting was more inclined to a light-hearted campus comedy, which ran counter to the slightly sour realism story. But at that time, we only regarded this work as a self-inflicted product in the small circle, and actually installed this version of the vertical painting into the game.

Because of the influence of some Japanese G, and the experience of trying in “Xianzhuan”, Bai Chesi found Kebol according to the script, and ordered a few Q-version CGs, which are the ones you see in the game, vivid The Q version of the expression adds a lot of vitality to the daily life of the protagonists, and the final effect is obvious to all.

The background this time is the free background material of ResDIY, which was put into the game after a little modification from the paper according to the script, which is why everyone thinks the background is very familiar.

After I got the art done, I remembered the dubbing thing. Before the dubbing of “Xianzhuan”, Lingzhangxin completed the two main characters in one person and two battles. The professionalism is very admirable. I asked Bai Chesi to contact me to see if I could Let her dub one of the protagonists of “The End of the Qing Dynasty”. Unexpectedly, this time Sister Xin also pulled her friends Xinyue Bingbing and Zisu Jiuyue together to complete the third “Rain at the End of the Qing Dynasty”. Human voice.

In terms of hearing, with full Chinese voice, BGM is also indispensable. In the beginning of the music part, I wanted to ask my teacher who used to learn electric guitar to make it. The teacher usually writes some songs by himself, but he decided to give up after understanding the price. Later, I also thought about using free materials on the Internet, so I rummaged around on the Internet, but I still couldn’t find anything I liked. As a last resort, I had to ask a few advocates I knew at the time, and they recommended Mr. Hei Yao for me. After getting online, we found a few more suitable songs in Mr. Hei Yao’s material library as the songs of “Rain at the End of the Sun”. BGM.

Under the condition that the text, sound and art are all complete, the production of Qingmo Zhiyu is also coming to an end. At that time, we planned to release the game at the beginning of 22 years, throwing this rough unpolished stone into In the sea that responds to it…

However, do you think this is not the same as the final game product you see? This brings us back to our collaboration with Ryunosaki as we approached the original release date at the end of last year.

In the second half of 2021, Teacher HD organized a dinner party. Since the CP originally scheduled for November was cancelled, the dinner was changed to December. After talking with several others at the dining table, Teacher HD mentioned our work. , after reading he asked me a few questions:

“Why is the style of vertical painting and CG so different?”

I reluctantly explained that it was because of funding issues.

“Since the style of CG is more suitable for the theme of the work, why not let the same artist be responsible? Think about it as a player, will you pay for your current work on Steam?”

I was poked by these sharp questions, and even secretly wanted to quibble in my heart. First, our funds were not abundant, and it was difficult to achieve the amount and accuracy of the push; second, we put ourselves in the “as long as we can Under the positioning of “make it successful”, to the current level, at least this requirement is met, but HD teacher denied our project production.

But then, the HD teacher said again:

“Don’t compromise with yourself.”

I just recalled that the so-called low cost is just a shield for our own low quality, and what we really want to do is not the semi-finished product like it is now. In the final analysis, we did not follow our own wishes to do our ideal. s work.

After accepting the logical derivation of the other party, we also talked about the budget for replacing the vertical painting and the future cooperation model.

“If you don’t pay back the money, you don’t have to pay it back.” Teacher HD put forward this irrefutable proposal. After feeling the expectation and trust, and most importantly, understanding the purpose of making the game in the first place, we immediately canceled the original proposal. The planned release plan, and start to improve the quality of the game.

The most immediate effect is the art aspect:

We let Jigu, who was only responsible for CG, take over the iteration of the vertical painting, to ensure the unity of the CG and vertical painting styles, and to make the game style and character characteristics more distinct. Zhiqing’s cuteness, and Wanming’s gentleness, have all been more prominent.

On the other hand, during the polishing process, we found that the BGM of the game is really small and the repetition is too high, so we asked Mr. Hei Yao to make three additional songs. The three songs share the same main melody, and they derive completely different hearing according to the changes of emotions. The feelings are the theme song “Yan Zhi Qing Yu”, Yu Mo’s character song “The Misty Time” and Zhiqing’s character song “The Fog Disperses and Clouds Open”.

It’s a pity that the script has been completed for a long time, and the dubbing has already been implemented after the split. If you want to expand and change, there are too many aspects involved. We had to abandon the changes to the plot structure, but still optimized the descriptive text sentence by sentence.

After several months of polishing, “Rain at the End of the Day” was officially completed and finally launched.

Since the launch, not only the comments on Steam, but also on Station B, Tieba, Weibo, as long as there are comments and opinions on “The End of the Rain”, we have been recording them continuously. We borrowed the screenwriter Bai Cheese who likes to play. A comic stalk: must be alive for the next time.

Thank you very much to everyone who participated in the production, provided help, and helped with the promotion and evaluation along the way. Everyone has worked hard. At the same time, I would like to thank all the players who have played “The End of the Rain” for their support.

This game production has also taught me various knowledges such as the importance of funding and the need for a unified art style. There are indeed many problems in “Rain at the End of the Day”, and these problems will be turned into appetite, prompting us to do our best in the future to make works that everyone recognizes. The next new pit is already actively preparing, and the game time and the number of CG vertical paintings will be significantly improved. I hope that when we meet next time, we will all become better.

Thank you for reading this, and see you next time.

There are 2 more answers to this question, see all.

What is your favorite story about the game “Heavy Rain”?

Which plot designs in the game “100 Days of Love in the College Entrance Examination” do you find funny?

This article is reproduced from: http://www.zhihu.com/question/545882212/answer/2605390530?utm_campaign=rss&utm_medium=rss&utm_source=rss&utm_content=title
This site is for inclusion only, and the copyright belongs to the original author.