In Mobile, Alabama, USA, in 2015, a humanoid robot (SAFFiR) scans the raging fire on the “Shadwell” test ship, with its infrared eyes fixed on the center of the fire, the hose in the robotic arm Precisely shoot at the flames.

This is a shipborne automatic firefighting robot developed by robotics experts at Virginia Tech for the U.S. Navy, and it is also the first time that a robot has been used to fight fires.

SAFFiR has several key capabilities. It can see and walk around with dual cameras, measure precise distances between objects with laser sensors, and find sources of fire with thermal imaging cameras.

The actual combat drill of SAFFiR made the world intuitively feel the value of firefighting robots in fire rescue for the first time.

Firefighters are one of the most dangerous occupations in peacetime.

In the past four years alone, 111 firefighters have died in the line of duty, with an average age of 28.

Fire, explosion, high temperature, thick smoke, poisonous gas, hypoxia and other extreme environments that ordinary people rarely encounter once in their lives are the norm in the work of fire rescuers.

According to the latest data released by the Fire and Rescue Bureau of the Ministry of Emergency Management, in the first half of this year alone, there were 962,000 fire alarm incidents across the country.

Frequent fire accidents and ever-changing fire scenes, even if firefighters have experienced many battles, it is difficult to be foolproof. 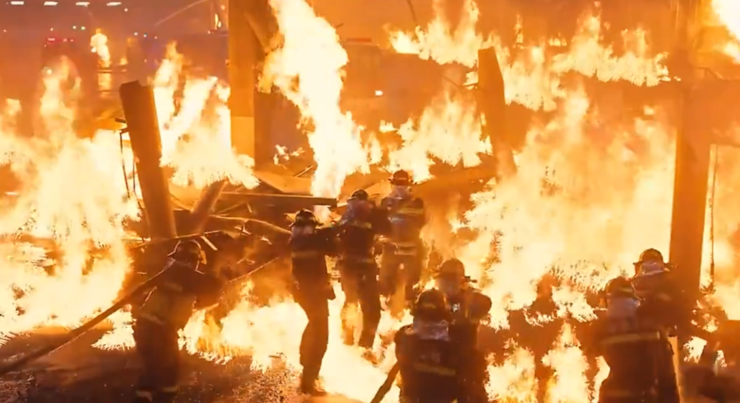 With the development of economy, there are many hidden dangers such as leakage and explosion of various oil and gas, poisonous gas, tunnels and subway collapses, and there are more and more urgent, difficult, dangerous and serious vicious fire scenes. In the 13th Five-Year Plan for the fire protection business, fire-fighting robots have been included in the procurement list one after another.

The emergence of fire-fighting robots can truly replace fire rescue personnel into extremely dangerous areas such as “people can’t reach, people can’t enter, and people can’t do it”, which not only ensures the safety of firefighters, but also greatly improves the efficiency of fire rescue.

In the fire scene with thick smoke, seeing clearly and accurately is the key to the success of fire rescue.

Because the fire-fighting robot is equipped with an infrared camera and a thermal imaging system, it can accurately distinguish the fire environment, detect the surrounding organic life, and transmit the “seen” information to the command center at the first time, and assist the command center to formulate the next step response strategy.

Going deep into the core high temperature fire field and accurately extinguishing the fire at the fire point is another key to efficient fire rescue.

Traditional fire-fighting robots can only assist firefighters to perform tasks at the periphery of the fire because they do not have the ability to withstand high temperatures. In response to this pain point, domestic Lisheng scientific research has released a “high temperature fire fighting robot” that can penetrate into the high temperature dangerous area of ​​the fire field. This robot can work continuously for more than 30 minutes in a fire of 1,000 degrees Celsius. It is necessary to issue an operation command in a far away from the dangerous area.

The traditional crawler robot can climb uphill and wading down, has large traction force and is not easy to slip. It is a fire-fighting hero in large-scale disaster-stricken sites such as petrochemical industry, UHV substations, large-span space workshops, tunnel pipe corridors, and ports.

However, when faced with obstacles such as easily collapsed buildings, ruins, and stone piles, as well as narrow spaces such as stairs and indoors, the huge crawler robot can only do nothing.

Some time ago, Yunshen released a “Jueying X20-Fire Reconnaissance Robot Dog”. As can be seen from the name, this fire fighting robot does not follow the traditional crawler-type design, but adopts a four-legged design, which has the advantages of Ability to walk freely in complex terrain. 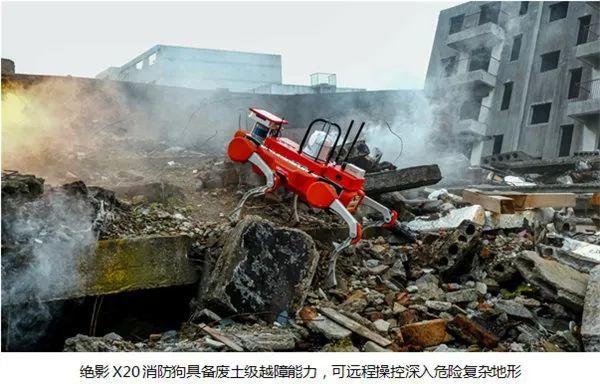 In terms of intelligent detection, the quadruped robot dog in the depths of the cloud has been given more powerful vision.

With the on-board panoramic camera and dual-spectral gimbal, it can not only present a complete scene panorama from multiple angles, but also perform 30x zoom to detect tiny targets in the distance, and it can also penetrate fog to track heat sources. That is to say, no matter the panoramic view, the distant view or the occluded scene, it cannot escape the eyes of the robot dog.

The collection of these data, on the one hand, provides rescuers with valuable visual information and can deploy them flexibly in the face of the ever-changing fire scene; on the other hand, it also provides powerful information for post-disaster data analysis, which is of educational significance for pre-disaster prevention.

Let life no longer take risks, the landing of fire-fighting robots is urgent

In recent years, with the continuous development of science and technology, the fire protection industry has also begun to develop in the direction of intelligence and automation.

In 2017, the Fire Bureau of the Ministry of Public Security issued the “Guiding Opinions on Comprehensively Promoting the Construction of “Smart Fire Protection”, proposing to change from “traditional fire protection” to “modern fire protection”.

In 2020, the Emergency Management Department formed after the firefighting reform further proposed to improve the informatization, intelligence and professionalization of emergency rescue and operational command of the national fire rescue team to meet the actual combat needs of “all disasters and major emergencies”.

Under the call of the state, many companies have stepped into the game, and the market for fire-fighting robots has expanded, jumping from 520 million yuan in 2017 to 3.24 billion yuan in 2020, with an average annual compound growth rate of 84%.

In theory, this is certain, but in practical use, not necessarily.

Leifeng.com believes that it is a fact that the number of fire-fighting robots equipped by my country’s fire-fighting forces is not only very limited, but also has uneven distribution in various regions.

At present, only the fire brigades in economically developed cities are equipped with fire-fighting robots in a small number. As for the more professional and more expensive high-multiple reconnaissance robots, fire-fighting demolition robots, etc., it is a rare thing that will only appear in a few fire brigade.

Another fact is that despite the advantages of firefighting robots, the current firefighting robots are mostly used in preventive exercises and publicity activities, and rarely participate in real disaster situations and exert practical value.

The number of equipment is seriously insufficient, and the practical ability is not satisfactory, exposing several problems in the fire-fighting robot industry.

First, the technological maturity is not enough. At present, most of the domestic fire-fighting robots are imported. The research and development and application of domestic fire-fighting robots still lag behind developed countries in Europe and the United States. In terms of flexible movement, autonomous detection, perspective technology, and human-computer interaction, they still need to catch up.

Second, the cost is high. Fire-fighting robots are high-tech products, and they are faced with scenarios such as fire with great uncertainty and great destructive power. The high cost, coupled with the high maintenance costs caused by damage, make the general application of fire robots a problem.

Furthermore, there is a lack of a sound management mechanism. It is precisely because the actual rescue cases of fire-fighting robots are few and their value is limited, it is difficult to get attention in practical applications, thus entering a vicious circle.

“Machine substitution” is urgent, and we look forward to the day when a large number of fire-fighting robots enter the real battlefield as the technology matures and costs are reduced.

This article is reprinted from: https://www.leiphone.com/category/smartcity/EMAWAL565aO7IewU.html
This site is for inclusion only, and the copyright belongs to the original author.