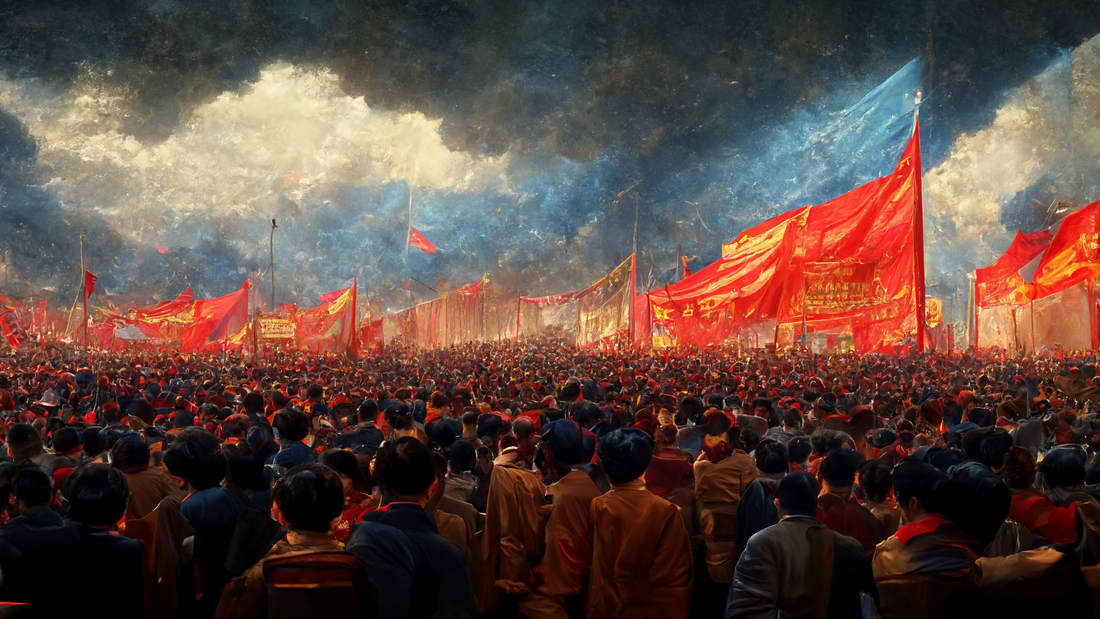 Concept art made with MidJourney

The CCP network of party members is less separate from the Chinese state, as it doesn’t pretend to be at a great remove from the levers of power as NYT does. But the party is not the same as the state. Indeed, there are 95 million CCP members, and they don’t all have senior government positions anymore than every registered Democrat has a plum spot in the Biden administration. Instead, they are spread out through society. How does it work?

Balaji mentioned Chinese Communist Party (CCP) is “primarily a network” and described the long and arduous process of joining the CCP in his book (Chapter: Moral Power, Martial Power, Money Power from The Network State ). It could take years from expressing interest, preparing materials, attending courses, taking examinations, reference checking, entering probations to making a life-long commitment to the Party.

If you are surprised by this complicated and laborious journey of joining the CCP. Wait for it. In reality, the recruitment of CCP started at a very early stage to prepare young talents on their path to becoming CCP members. In this article, I’ d like to share the whole process from my experience to give you a full picture.

My path to becoming a CCP member

I was a Merit Student ( San Hao Xue Sheng ) for six years since I entered primary school. It means I was good in three aspects: morally, intellectually, and physically. I was recruited along with 6-8 top students in my class ( average size is 50-60 students) to join the class committee (an early leadership training program) to assist teachers in different areas such as media, sports, chores, learning and discipline.

Top students had a chance to join the Young Pioneers of China (YPC) ahead of others, wear a red scarf , raise the national flag at every Monday morning students’ gathering ceremony and wear an armband to “show off” their statues. It creates a competitive environment among children at a young age because everyone wants to have a good student label and privilege.

A mock-up imagine of San Hao Xue Sheng award
Each semester, only 3-5 students in each class (roughly 1 in 10 chance) have the honour to join YPC. The key criteria depend on students’ exam results and popularity at school (get votes from classmates). Sometimes, if you have Guan Xi , you might be able to queue-jumping to join the YCP despite misbehaving at school.

Eventually, everyone will become YPC members before they graduate from primary school. The point is to join YPC as early as possible so you will have a good record of entering good secondary school and become the early candidates for the next stage: Communist Youth League of China (CYLC).

Armband you wear as a class/school committee member
Fast forward to my last year at secondary school (14 years old), I was elected to be a member of CYLC for the same merits: good scores, morally and physically healthy, and got votes from classmates. The quota of joining CYLC at secondary school is about 1 in 10 chances from each class (regular size is 50 -60 students per class).

It doesn’t matter whether you attended either public or private schools. It’s a matter of time. Top-tier students got a chance to be CYLC members ahead of the crowd. But eventually, most people will become CYLC members once they enter high school and start paying membership fees (roughly ¥0.2 per month as students).

Mind you, none of those YCP and CYLC elections was from my own will. If you fit the criteria, you automatically get approached by teachers and must follow the instructions to pass the procedure to join the Party. I knew nothing back then and felt such an honour to be selected because it was like playing a status game to prove I was in the exclusive club since only a single-digit number of people could join the Party (oh, poor young and native Camellia!).

The Communist Youth League Badge
Now, let’s move to the next stage of joining the CCP !

I attended the National Colleague Entrance Examination (competed with 10 million students) and got accepted by a reputable university. After my first year in university (18 years old), the CCP committee at my university asked me to submit a CCP membership application. The reason was that I had good scores and was actively involved in many activities in the Student Association at my university (I was the head of media at SA).

Back then, I had already thought of going abroad to study, so I didn’t care about joining the Party. However, if I wanted to get my degree and continue working at Student Association, I had no choice but listened to the mentors from the CCP committee to set a good example for other students.

I didn’t want to put much effort into fulfilling this duty, so I searched online, downloaded a CCP membership application template, and submitted it. It turned out nobody really read about that. As long as you submit the paperwork, you are good to move to the next stage.

Not long after, I got a Communist Party textbook and took a couple of lectures to prepare for my written test. Those lectures were probably the most boring things I had ever taken, so I quickly lost interest and chatted on my mobile the whole time.

Since I didn’t take this Party membership application too seriously, I only took one night to recite key content from the textbooks before the exam and quickly passed the test. Then I had two interviews with the President of the Student Association and a mentor from the CCP committee at my university. The interviews were more like casual chats to tick some boxes, including my motivation to join the Party, my family background and so on. The last step was to go through public voting among my schoolmates. Once approved, I became a CCP member on probation.

Before I went overseas in my third year at university, I became an official CCP member. The following story was hilarious. Since I moved to New Zealand and didn’t pay membership fees on time, I got warnings from the Party. Now I assume I have already been removed from the CCP list since I haven’t contributed a single cent (not bad, huh :P).

The most interesting part was almost every student in my university wanted to join the Party because it was a guarantee for them to get a good join after graduation in China. When they knew I didn’t want to join, they begged me to talk with the CCP committee to transfer the quota to them. I tried but failed. If mentors from the CCP committee at your school think you should join, you have to obey the order without any other choices.

Chinese people are trained at a young age to follow the honour path to become CCP members and try hard to get approval from crowds. Those are the two criteria to climb the ladder to be at the top:

Although some people speak highly of CCP’s meritocracy way of selecting talents , my concern is under Xi’s lifelong ruling and turning China into nationalist militarism; China will get more “talents” who become hyper-nationalists and controlled by authority.

Based on my experience and observation, two scenarios happened in my generation:

– Imagine you are an intelligent person with ambition for China’s reformation and won’t be easily brainwashed by state-approved information. You know the meritocracy game well, can crack the code, and be selected into CCP. In a rare case, you can change the CCP from within with your abilities and power. More likely, you either give up and join the crowd or move overseas ( Runxue ).

– Imagine you behave well at school, study hard, never question authority, do what crowds do and join the CCP following the traditional path. You obey the orders from above, maintain the status quo, think CCP is the best, and become a nationalist . That’s what I see happening in the current CCP world. Yes, you are a good student/worker/member. Mummy and daddy will award you with candies. The stake of exit is too high. Why not just stay in the system and be a good kid?

Our goal in thinking all this through is not pessimistic but pragmatic: to change what we can change, by setting up a fourth pole as an alternative to the failing US establishment, to maximalist crypto-anarchy, and to the centralized surveillance state of the CCP .
​
We call the raw material for this fourth pole the International Intermediate . It includes American centrists, Chinese liberals, Indians, Israelis, web3 technologists, and essentially everyone from around the world that wants to avoid both the American and Chinese whirlpools.

I spent my formative years in China, moved to the western world and lived for more than a decade. I have been heavily influenced by both eastern and western cultures and have entered the tech world since the start of my career. The Network State book was launched in time for people like me who are equipped with knowledge and skills and want to challenge the status quo.

Balaji wrote the possible future in the book and proposed a new Recentralized Center model where “ a circle of startup societies and network states built by pragmatic founders, a group of high-trust communities architected as intentional alternatives to failed states and surveillance states alike”.

I’d like call for more people to join the movement of building the network states. If not us, who? And if not now, when?

This article is reprinted from: https://www.camelliayang.com/blog/how-to-become-a-ccp-member
This site is for inclusion only, and the copyright belongs to the original author.