I stayed up late to watch the first three episodes, which fits the theme of the work very well (laughs).

In the second episode, many of my friends thought the plot was too watery and boring. After watching the third episode, it got better. Sure enough, there is still a bit of Shura field .

Taking this opportunity to add to the topic of SHAFT’s performance style mentioned in @Anier’s answer.

How to evaluate the first episode of the new animation “Song of the Night” in July?

Only the head and tail are left in the action, and the middle state is cut off

The two examples at the beginning of the first episode are both sequences. The female protagonist jumped from the rooftop, the last shot was with one foot, the next shot was already flying out, and here is the male protagonist going out. .

The main intermediate movement is cut out in both places. This is not a random cut. It is obvious that the previous shot has already given enough information, and it has already prompted you what the character is going to do through the scene and the close-up of the limbs (comparatively coincidentally in the first two places. One shot is a close-up of the foot), so the next shot directly gives the character the state of completing this action, and the transition is very natural.

It’s an interesting contrast to the performance of another new show this season, “Uncle Another World,” which I wrote about earlier.

How to evaluate the second episode of July’s new animation “Uncle in Another World”?

Uncle Another World extends the state of stillness after the action is completed, and tastes the aftertaste and atmosphere in the stillness, while “Song of the Night” cuts out the action, so that the lens connection is very tight, and the rhythm is very strong, which is similar to the pop of the work. The ambience blend is also very appropriate. The two performance styles are diametrically opposed, but both utilize the underlying logic of audience expectations and hints. The principles are the same. It can be said that the seeds of the same visual principle produce different flowers.

To give another example of the first episode, the male protagonist refuses the second female confession in his memory. The first shot is a still large panoramic aerial shot of the two facing each other in the classroom, and the second shot catches the female protagonist running out of the screen. At the beginning of the second shot, the heroine had already turned halfway around, and unlike the stillness of the previous shot, the speed was very fast. The technique of cutting out the middle action was also used here. At the same time, the two lenses connected in the front and back are obviously different in composition, angle, focal length, light source, configuration of front and rear scenes, etc., showing a very compact sense of stitching.

This is a lens connection method commonly used by SHAFT performers.オトナアニメ’s special “SHAFT Super Complete Works! ! ” (published in 2010) was analyzed, and the material was the most popular “Monster Story” of that year: 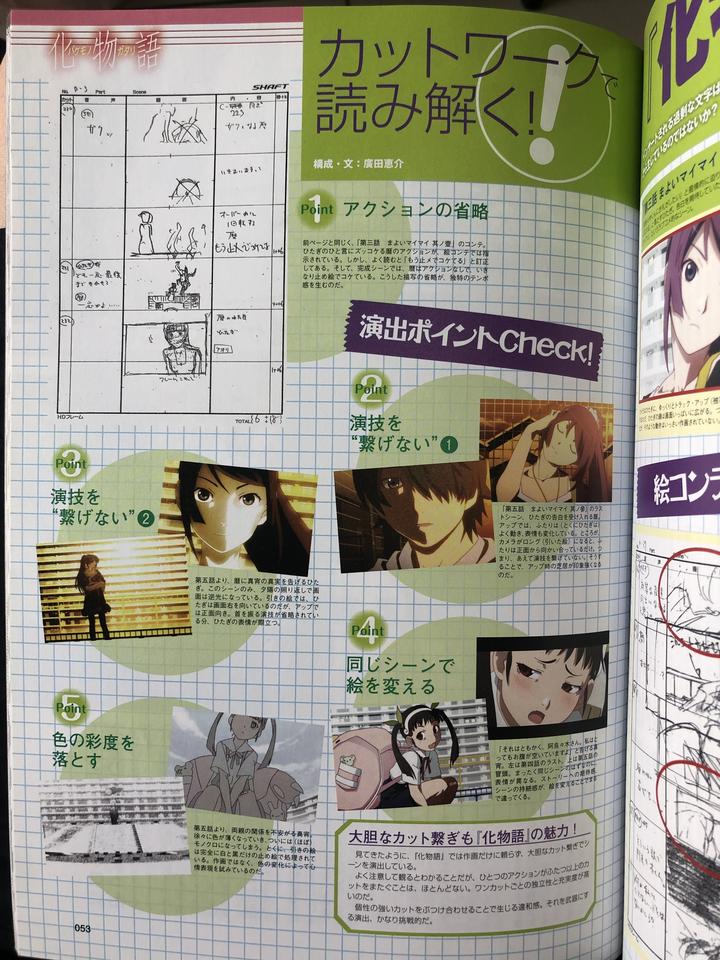 The book’s summary of SHAFT-style editing:

The omission of action does not allow the acting to connect to the same scene, but also allows the painting to change and reduce the chroma of the color (“Song of the Night” is the opposite way to increase the chroma)

If you pay close attention, you will find that there is hardly a single action that spans two shots. Each shot has a high degree of independence and fullness.
The sense of inconsistency born from the collision between shots with strong personalities, the performance with which it is used as a weapon is full of challenges.

It can be seen that among the many SHAFT-related works this season, Tomoyuki Itamura has inherited this characteristic performance most conspicuously, and it is no wonder that you will see the joke that “SHAFT won the second place in the SHAFT imitation contest”.

[Zhihu Daily] The choice of tens of millions of users, to be a big cow of new things in the circle of friends.
click to download
Further reading:

How to evaluate the second episode of July’s new animation “Song of the Night”?

How to evaluate the first episode of the new animation “Song of the Night” in July?

This article is reproduced from: http://www.zhihu.com/question/544528995/answer/2596058476?utm_campaign=rss&utm_medium=rss&utm_source=rss&utm_content=title
This site is for inclusion only, and the copyright belongs to the original author.