I came back from a drink last night and went to bed very early. Let’s talk about the hotly discussed $Shaanxi Coal Industry (SH601225)$ parent company Shaanxi Coal Group’s entry into the photovoltaic industry. On August 22, the review meeting of the feasibility study report of the Huangling silicon-based new material integrated industry project of Shaanxi Coal Group Huangling Mining Group Co., Ltd. was successfully held in Xi’an, Shaanxi Province. The proposed site of Huangling Silicon-based New Material Integration Project is located in Shuanglong Town, Huangling County, Yan’an City, Shaanxi Province. The total investment of the project is 18.2 billion yuan, covering an area of ​​2,513 acres. The construction scale is 100,000 tons of industrial silicon and 100,000 tons of polysilicon. 20GW monocrystalline square rod + 10GW monocrystalline silicon wafer, after the project is completed, the annual sales income will be 21.4 billion yuan, and the total annual profit will be 11.9 billion yuan.

First, this meeting was held on August 22. Although it was only disclosed by mainstream media yesterday, the review meeting was not classified. The market has long known it, and it has been fully reflected in the prices of relevant stocks .

Fourth, this move by Shaanxi Coal is strategically correct. From the perspective of the big cycle, the old energy represented by coal this year is at a historical peak . The outbreak of the epidemic, the Fed raising interest rates and shrinking the balance sheet, and the Russian-Ukrainian war are unsustainable. The surge in demand for old energy is unsustainable. Seizing this wave of opportunities for transformation is the right choice.

Fifth, Shaanxi Coal’s entry into photovoltaics has improved the prosperity value of photovoltaics, increased the involution of photovoltaics, and objectively demonstrated the correctness of TBEA’s strategy. It is a good thing that more and more players in a rising industry, especially high-quality players, come in. Don’t be afraid of crowding and involution. People and companies who are afraid of competition and involution will eventually become losers. Tongwei can be called a typical case of “big rolls become king”. Whether it is fish farming, dry feed or silicon material, it can achieve the lowest cost and the highest efficiency among the involutes, and the more the rolls are, the bigger the rolls are. This is like Cao Cao’s extremely introverted entrepreneurial process.

Many people can’t imagine the difficulty of Cao Cao’s entrepreneurship. I think Cao Cao’s entrepreneurial difficulty is second only to Liu Bei, who weaved mats and sold shoes and was born from pure grass roots, among the heroes in the late Eastern Han Dynasty. First of all, Cao Cao’s family background is underestimated by most people. Cao Cao is after Cao Can, the founder of the Han Dynasty. This is false. Let’s take a look at the hard power of Cao Cao’s family background. Cao Cao’s father, Cao Song, adopted it to the great eunuch Cao Teng, so many people called him “the queen of the eunuch”. Let’s take a look at the strength of Cao Cao’s grandfather Cao Teng. Forget it, see for yourself, the key words: the great merits of supporting Emperor Huan of the Han Dynasty, working in the court for more than 30 years, serving four great leaders, and making no mistakes.

Cao Cao’s father, Cao Song, was under the shadow of his own father, and he also rose to the top. He has successively served as Sili Xiaowei, Hongluqing, and Dasinong (what are these positions for your own Baidu), and he ranks among the nine ministers and has a high position. In the fourth year of Zhongping (187), he served as Taiwei by bribing the middle officials and donating money to Xiyuan, ranking the third public (indicating that Cao Song was not only powerful, but also rich ) . Later, when he returned to his hometown and passed by Xuzhou, he was killed by Tao Qian’s subordinates because of too much money. At the age of 20, Cao Cao was named Xiaolian as his lord, and he was awarded Luoyang Northern Lieutenant, equivalent to the chief of public security in Beicheng, the capital. Compared with Yuan Shao’s family background, Cao Cao’s family background is not only strong but not weak in terms of money and power, except that he does not have the great reputation of “four gates and three princes”, he wears the hat of “the queen of eunuchs”, and he cannot be a leader of the gentry . This is a huge advantage of Cao Cao’s entrepreneurship. The difficulty of Cao Cao’s entrepreneurship lies in the fact that Yanzhou, the base area after the start of the army, is too introverted, and ordinary people cannot survive in this environment at all. Check the map for yourself. In this case, Cao Cao played the excellent characteristics of the scroll king and successfully killed a large number of opponents and unified the north. The time relationship is not specific. Many people only know about Cao Cao and Yuan Shao’s Guandu battle, but they don’t know that Cao Cao was an important ally of Yuan Shao’s camp in the early days. It was only after Cao Yuan’s strength that his strength expanded rapidly that he became involved in the camp . 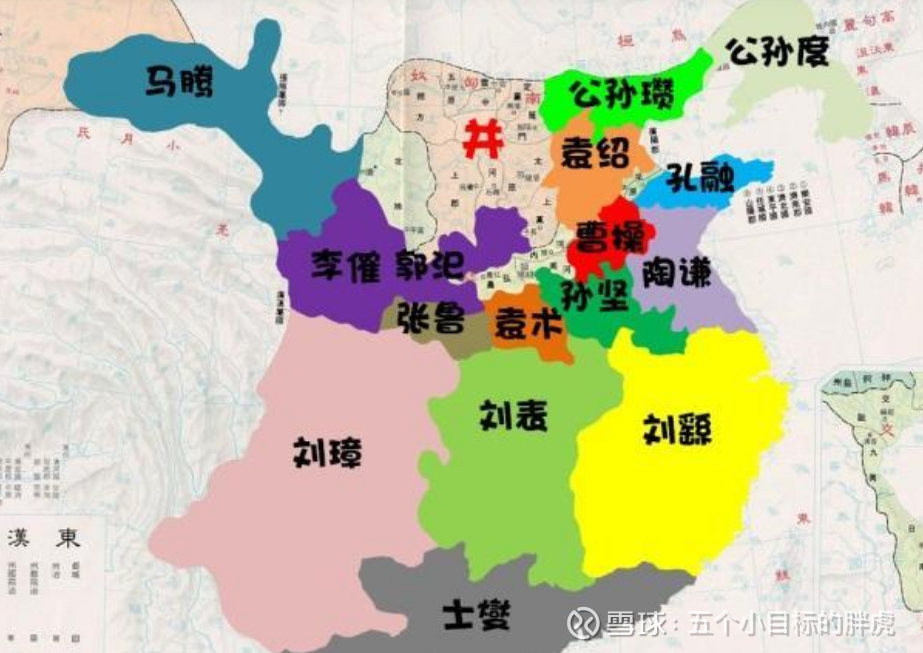 Cao Wei’s huge advantage over Wu Shu when the three pillars were in a confrontation were all rolled out by Cao Cao in the early stage. So involution is not a bad thing. The stronger the roll, the fatter the winner will take all. $Tongwei Co., Ltd. (SH600438)$ $TBEA (SH600089)$ #Difficulty between old and new energy? How to choose growth VS value fund # #New energy has slumped and stopped the tide, and photovoltaic energy storage lithium batteries have fallen sharply# #The popular track collectively shuts down, is it time to deploy value funds# @胡子伊Zoey @Logic Institute @Today’s topic @雪ball creation Author Center @Snowball Fund

This topic has 50 discussions in Snowball, click to view.
Snowball is an investor’s social network, and smart investors are here.
Click to download Snowball mobile client http://xueqiu.com/xz ]]>