Many people say that this year is “the first year of AI painting”. First, Disco Diffusion became popular. From Text-to-Image (using text to generate images) to develop the community and the creative design industry, it became popular in the eyes of ordinary people.

People are keen to input two completely different objects, such as the words “Da Vinci” and “iPhone”, into the AI ​​program, and then wait for the rendering of the picture layer by layer.

For another example, I kneaded the poached egg into the cloud丨The author used Disco Diffusion to generate

It was a “blind box”-like experience. For people who do not have any art foundation and painting ability, most of AI’s “melting stems” pictures are amazing enough. Even if the effect “rolls over”, they can continue to be optimized by adjusting the descriptors.

Then, the AI ​​painting tool Midjourney also became popular. Different from Disco Diffusion’s simple interface full of English and codes, Midjourney is directly mounted on the Discord channel. The process of entering instructions is no different from sending WeChat to others. What is even more surprising is that it generally takes about 60 seconds to generate a painting. .

Then, OpenAI’s DALL·E 2 came out halfway. Unlike the previous two, which are good at “conceptual painting style”, DALL·E 2 is more “realistic”, and can generate 10 pictures in less than 60 seconds. If you are not satisfied, you can also erase parts Regeneration… In just a few months, the title of “The Strongest AI Painter” has changed hands several times.

Google couldn’t sit still either. At the end of May, it published a paper to introduce its own contestant, Imagen, and directly challenged DALL·E 2, claiming that Imagen has “unprecedented realism and in-depth language understanding”, which is currently not open.

In the past two months, I have dealt with the first three “AI painters” frequently, testing descriptors, training robots almost every day, stepping on many pits, and overturning many cars. But at the same time, I got a lot of masterpieces.

This time, I will compare their painting generation characteristics, user-friendliness, etc., and organize their URLs, as well as some simple operation methods.

For ordinary users, they are powerful tools for figurative imagination; for professional people, if they are linked with other tools, there is endless room for imagination.

The artistry of generating graphs is the highest The process of generating paintings by Disco Diffusion is roughly divided into these steps: open the program; set parameters such as image size, number of process maps, and number of generated images; write the descriptors (Prompts) in English, and the format is roughly “painting type + object” (There can be more than one) + painting style setting + some rhetorical words with a limiting effect”; then start running, waiting for AI to render the painting.

My description for AI: “A beautiful painting of a starry night, shining its light across a sunflower sea by James Gurney, Trending on artstation.”

Generally, you need to wait half an hour, and if you stare at the screen, you will see the image gradually become clear and detailed.

During use, Disco Diffusion may prompt you to free up enough running memory on the computer, but because it runs on computing resources such as GPUs provided by Google for free, it does not require high computer hardware requirements for users. Just open the browser and run it.

Use AI to paint a Moebius-style scene: “a beautiful painting of a spaceship flying over a desert by Moebius, trending on artstation.”

Disco Diffusion itself is a free open source software, but if you want faster drawing speed, you can buy Google Colab membership to allocate faster cloud computing resources.

In addition to only entering text to let the AI ​​play freely, you can also insert an Initial Image in advance to constrain the AI’s creation.

For example, I first made a base map with tree outlines and green color blocks (left), and then operated, Disco Diffusion will play in this big frame, and the finished product is the right image

Disco Diffusion generated graphs are theoretically available for commercial use. The program is based on the MIT open source protocol. All Internet users can use, copy, modify and even sell generated graphs for free. But I think there is still a risk. The risk is mainly due to the fact that your descriptors will lead to plagiarism disputes.

When you use an artist with a distinctive style (especially a living artist) and a commercial work as a keyword, please don’t use it directly for commercial use.

Not so “out of line”, more “obedient” 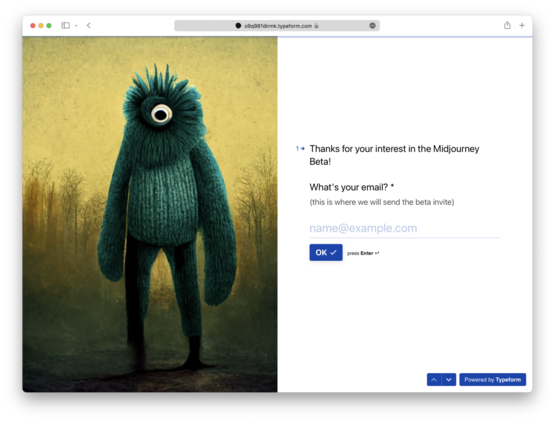 Midjourney is still an invitation-only system, and the internal test address is: https://ift.tt/AT7e5vc

To test Midjourney’s generation, I copied and pasted the keywords I had previously “fed” to Disco Diffusion—”starry sky,” “sunflower,” “Van Gogh”.

Drawings I generated with Midjourney

When I saw the finished product, I had an intuitive feeling: Midjourney’s imagination is not as “out of line” as Disco Diffusion. But if I consider it from the perspective of auxiliary creation, I would be more inclined to use Midjourney, a more “obedient tool” . After all, no creator is willing to give up the creative control to AI.

The advantage of Midjourney is that it is fast. The software generates graphs very quickly, about 60 seconds per one. If you’re not satisfied with the finished product, you can also enhance details, or extend changes, in near real-time. 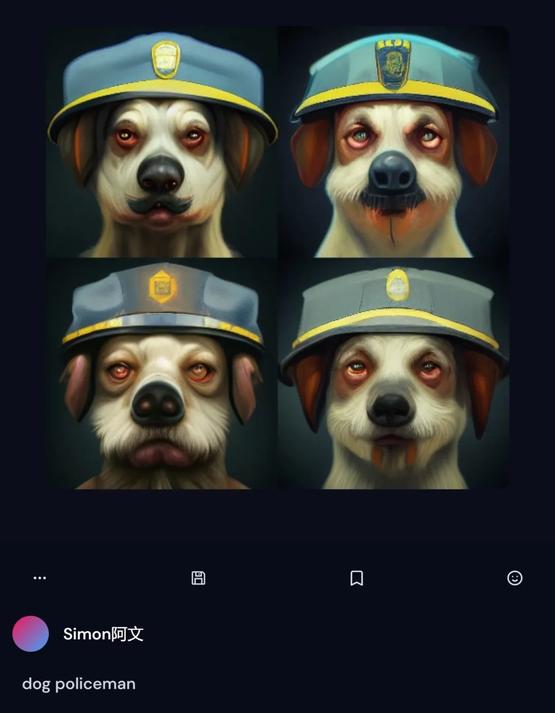 Generate 4 puppy cops in one minute丨Generate with Midjourney

Midjourney rides on the communication software Discord. After entering “/image” in the dialog box, enter the descriptor in English, and then press the Enter key. This process is like chatting with AI.

After 60 seconds, you will receive 4 rendered images in the dialog. If you are not satisfied with “Figure 1”, you can click the “U1” button to add details, and press the “V1” button to extend the changes until you are satisfied.

So, I took Midjourney to generate “McDonald’s in the 19th century” and “Migrant workers in the 18th century”: 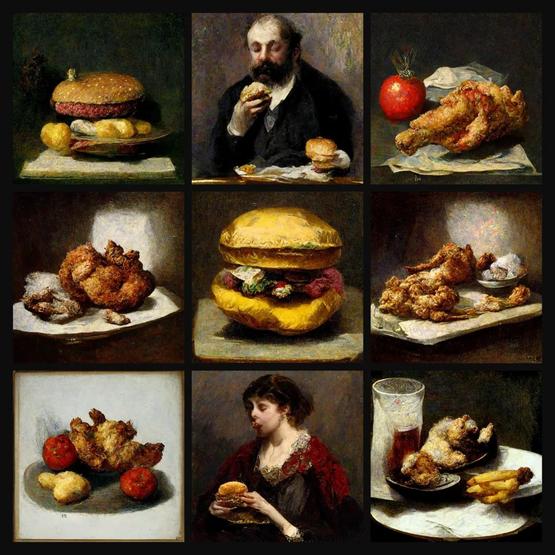 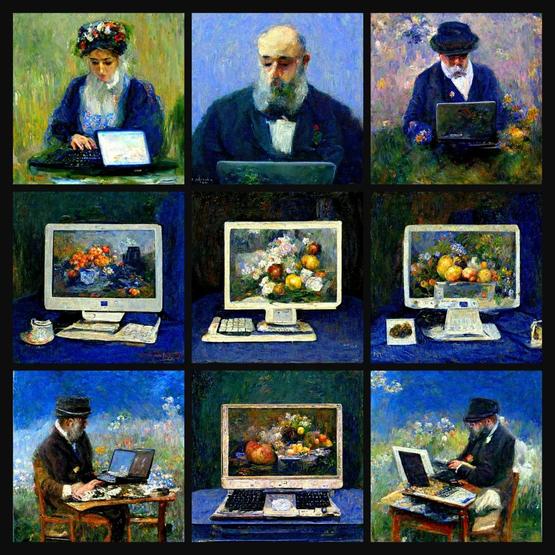 The reason why Midjourney is a “productized” Disco Diffusion is that its interface is more friendly, and the other is that it also has a built-in creative community, you can see what kind of paintings are generated by which descriptors players use . This is a very valuable “painting style” database, which is very suitable for “copying homework”. 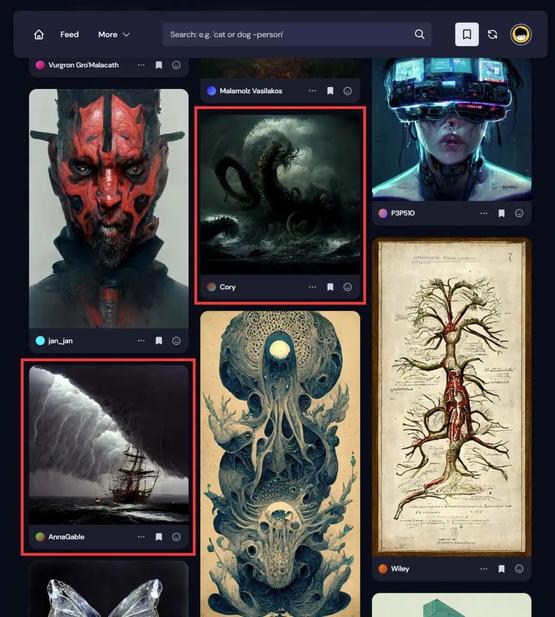 For example, I tried to generate the scene of the episode “Bad Journey” in “Love, Death and Robots”, referring to the descriptions of the two artists in the picture above, and then I generated a satisfactory painting: 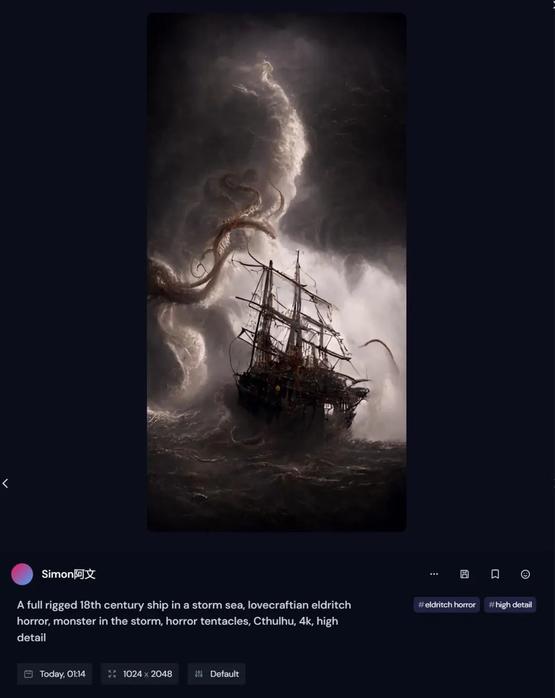 “Copying homework” further lowers the threshold for generating decent works, but on the other hand, it also loses a lot of the fun of exploration. Don’t let game cheats ruin a good game.

In terms of copyright, if you are a free user, the copyright of the image belongs to AI, and after paying $30 per month, you can use the image for commercial use. But at the same time, if you make a profit of more than $20,000, you need to give Midjourney a 20% share.

I cut Van Gogh’s hair, I turned the elephant

I waited more than a month before I got the qualification for the internal test of DALL·E 2. If Disco Diffusion is better at depicting atmospheres, landscapes or concept art, then DALL·E 2 is better at realism.

“Can the elephant turn around?” I took this “classic Party A requirement” as an example to try the realistic ability of DALL·E 2. 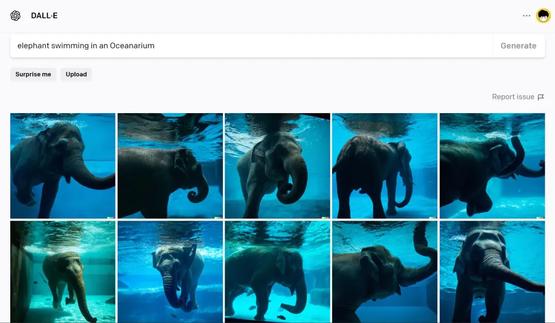 Let the elephants dance with the sharks:

Let the elephant go wild on a Harley: 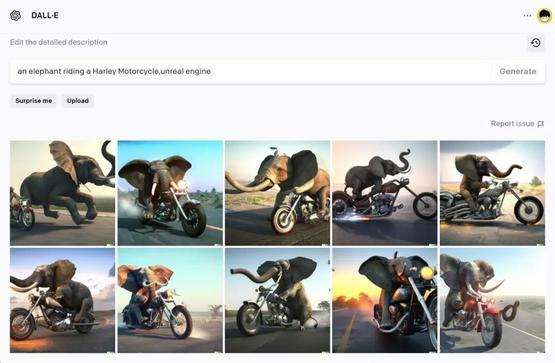 Let the elephant be said by Cao Chong: 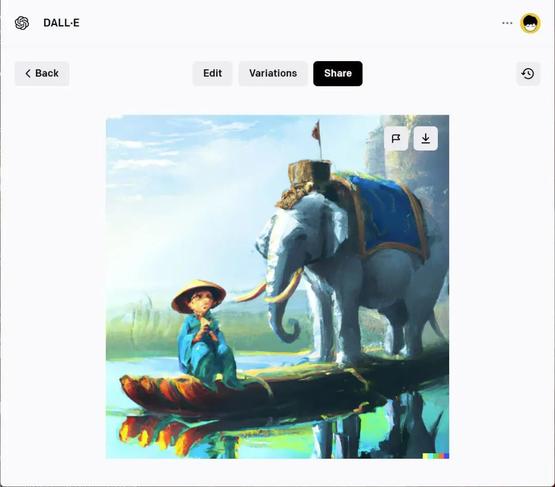 The “Parties” have nothing to say.

It is no exaggeration to say that this is the best AI drawing tool I have ever used. The operation is simple enough, the degree of completion is high, and the speed is fast enough to be a search engine: 10 images (1024 × 1024) are generated in less than a minute, Changes can be extended infinitely, and can even be partially regenerated by erasing. You can keep giving Van Gogh a “haircut”.

In terms of copyright, OpenAI, the organization behind DALL·E 2, lists several strict restrictions: the copyright of image generation ultimately belongs to OpenAI; it is only for personal learning and exploration, not for commercial use, and cannot be used to make NFTs; it cannot be published on social media. Realistic face generation results will have the risk of portrait infringement.

OpenAI also claims to have banned AI from remembering the faces of celebrities, as well as circumventing racial and gender stereotypes, among other things.

Before waiting for the qualification of DALL·E 2 internal test, I found a “replacement” – DALL·E mini, which is a demo made with the first generation DALL·E. The generation speed is fast, but the picture completion is not as good as that of DALL. ·E2. 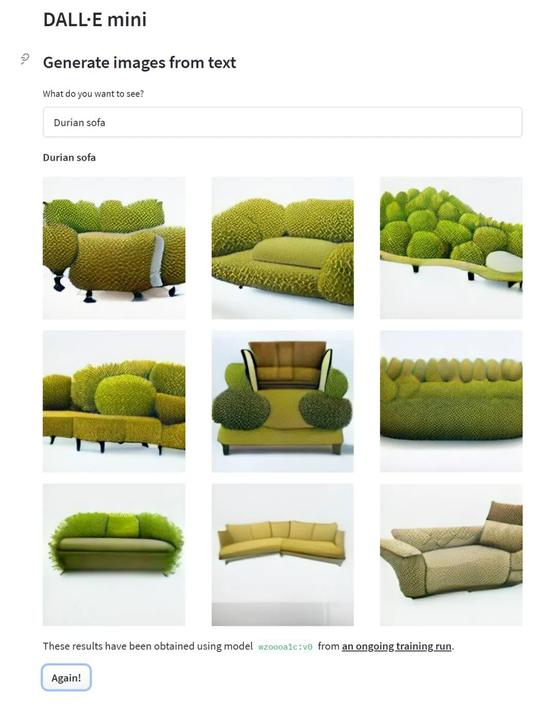 Generating an image is just the first step

“Can you make them move?” I looked at the paintings returned by the AI ​​and began to think of a way: 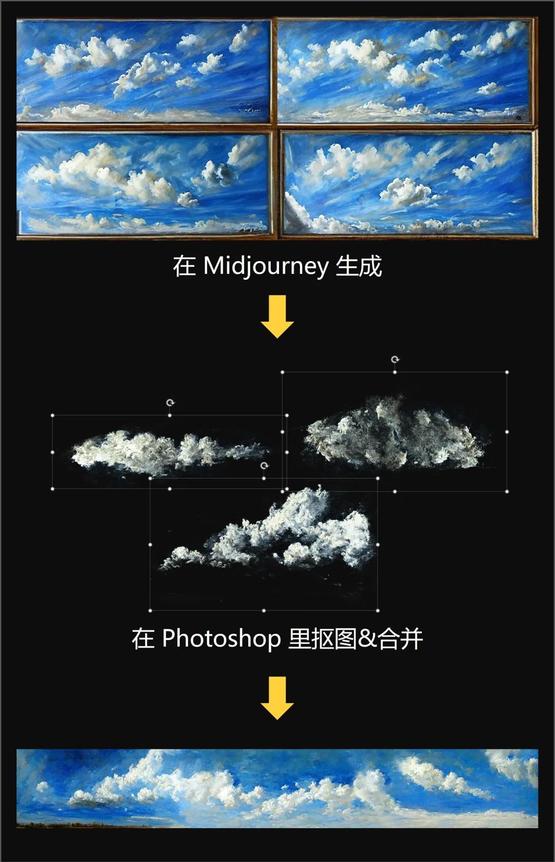 The completion of AI -generated images does not mean the end of creativity . If you take it as one of the links, and then connect with other creative processes, the imagination space is huge.

Let me show the creativity of illustrator Nerko again: he uses Midjourney to generate the material he wants, and then assembles the parts. 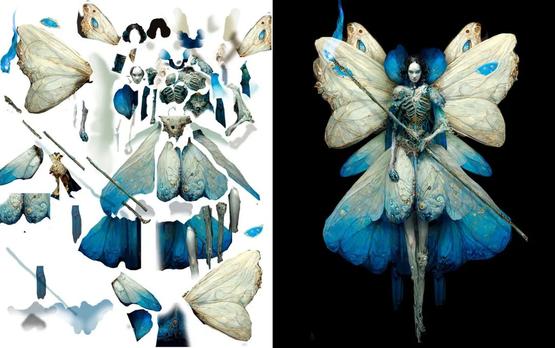 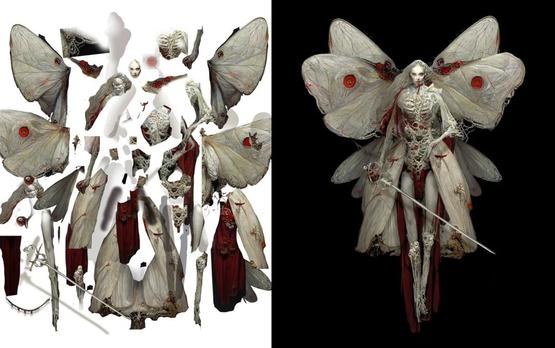 In his hands, AI is a kind of “productivity”. Selection and synthesis are still under his full control. He had been illustrator for 15 years before using Midjourney.

This article is reproduced from: http://www.guokr.com/article/461658/
This site is for inclusion only, and the copyright belongs to the original author.