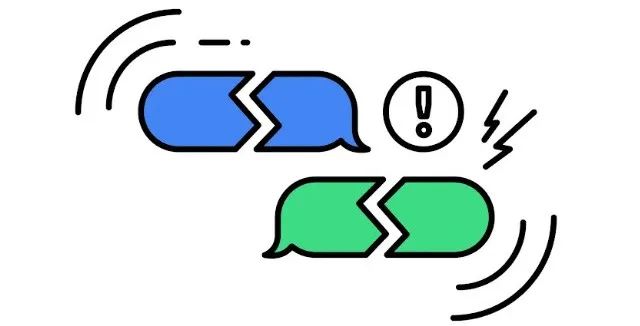 You may have heard the slogan “iMessage users look down on green bubbles” in the United States. Due to Apple’s blockade, Android users cannot send messages to Apple users via iMessage. Therefore, Google has also been quite critical of Apple.

Unexpectedly, this time Google kicked its nose and face: as the company with the worst instant messaging (IM) record in the entire Silicon Valley, Google actually ran to the top of the 6th Apple to challenge…

In the past two days, Google suddenly launched a plan to ask Apple to completely solve the problem of short messages. On a newly opened webpage on the Android official website, Google directly blamed Apple for the various problems in messaging between users across mobile operating systems:

“It’s not just the color of the chat bubbles, but blurry videos, broken group chats, missing read receipts, no ‘typing’ indicator, and inability to send messages over Wi-Fi. The reasons for these problems, It’s because Apple refuses to adopt modern messaging standards when Android and iPhone users text each other.” 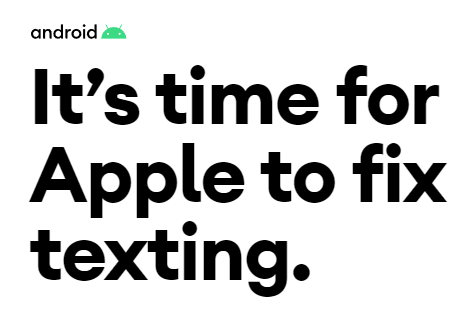 What’s even more outrageous is that Google actually used such a topic: #GetTheMessage

This phrase is actually a pun, it not only means to let Apple fix the short message function, so that users can “receive the message” normally, it can also be translated as “Listen to me clearly”…

Google’s rivalry with Apple has intensified in recent months. Some time ago, hip-hop singer Drake posted a song that mentioned bubble color discrimination, and Google also came forward to explain the reason. Even “Deadpool” actor Ryan Reynolds (and another identity is the owner of the operator Mint Mobile) also came out to join in the fun now: 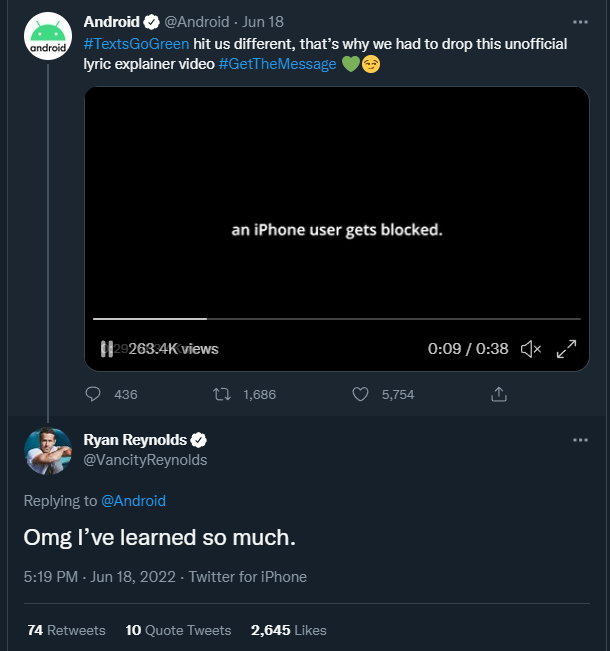 Which one is this singing?

Specifically, through this marketing plan, Google directly shouted to Apple: You should support RCS!

(The full name of RCS is Rich Communication Solution. It is a new communication protocol standard launched by the industry standard establishment organization GSMA. It is a short message system similar to iMessage and based on Internet channels instead of cellular channels. and MMS, two protocols that are decades behind.)

“Apple turned text messages between iPhone and Android into SMS and MMS, using over-view technology from the 90s and 00s. But Apple could have adopted RCS, the modern communications industry standard. Solving these problems would not Any impact on messaging between iPhone and iPhone can make the messaging experience better for everyone.”

It stands to reason that if there is such a reliable new agreement, everyone should support it, right?

More than a decade ago, Apple saw the backwardness of SMS technology and believed that iPhone users should not have such an experience, so it made an Internet channel-based SMS substitute, i.e., iMessage, which was officially released in 2011.

Its main advantages include fast speed (no need to go to the operator’s account), support for multiple content formats, no payment, sent/read receipt function, and you can see the prompt “the other party is typing”, etc. Since short messages are still very popular in the United States, the popularity of the iPhone has made iMessage the most mainstream IM service for a considerable number of people, especially among young people.

Google saw that iMessage was deeply behind, so it also made many attempts, and launched at least 6 products that competed with iMessage/FaceTime – but they all failed very much, closed, closed, stopped, and transformed… 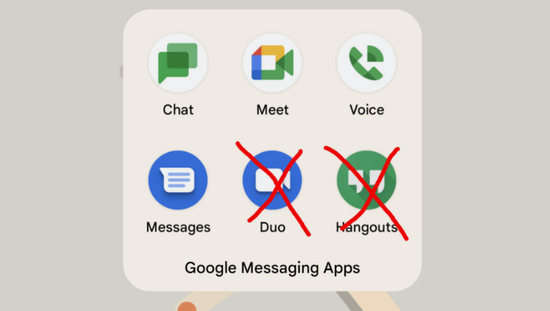 After going around for several years, Google found out that the GSMA was already doing RCS. At first glance, this is not what it wants! So it joined directly and strongly, and even regarded itself as the “boss” of the alliance. Of course, in recent years, Google’s crazy Amway RCS has indeed spent a lot of money on marketing.

Basically, you can think of RCS as iMessage for Android. According to public information, as of the first half of 2020, 88 operators in 59 countries around the world have supported the technology, and the number of active terminals is about 400 million, which is about one-third of the estimated number of users of iMessage.

At the same time, iMessage’s top position in the US market remains unshakable. Since it is still an exclusive feature for Apple mobile phone and computer users, iMessage is a high-end atmosphere of blue bubbles; while Android users can only send SMS to iPhone users, and the ugly green bubbles come out.

How serious is the situation that a discriminatory stalk of blue and green bubbles has formed. There is a song Text Go Green in the new album of well-known singer Drake specifically mentioning this…

Google insists that these are Apple’s problems, and they are deliberate barriers to maintain market share in mobile devices and lock users in its own software and hardware ecosystem.

This is why Google has increased the promotion of RCS since this year – it has even been a bit magical: not only does it need the support of major operators, but this time it simply finds its biggest rival. Apple: I can take your old sixth…

To be honest, Apple does have its own mistakes when it comes to SMS incompatibility. As the world’s largest consumer electronics giant, it’s no longer news that Apple is keen to build a walled garden.

In the previous case of Epic Games suing Apple for monopoly, there was also public information that the main reason why Apple refused to let iMessage support Android phones is that if iMessage loses its exclusivity, it will indirectly lead to an increase in the sales of Android phones, which is not good for the company.

Google hopes that the experience of sending messages across platforms is better, and this starting point is definitely correct. But the problem is that Google’s GetTheMessage marketing plan this time is too embarrassing: it is already recognized as a poor student in the class in IM, but it dares to challenge the top student Apple, and its posture is extremely contrived…

First of all, the solution RCS proposed by Google is really bad.

RCS is indeed one of the standards in the communication industry, but it can’t be called “modern”. Compared with SMS, it is not so ancient at best, and it took many years to barely reach the standard of IM products in the Internet industry. General level, but not quite caught up yet.

In terms of function, the public version of RCS still lags behind, and still does not support end-to-end encryption until today, while many mainstream IM applications (including iMessage) already have this feature; in terms of operator support, due to the regulatory environment of the telecommunications market in various countries Due to complex reasons such as differences, lack of financial incentives for operators, and uneven deployment efforts and results, the end-user experience of RCS has not been very good.

For example, in the United States, the support of RCS in the base stations of various operators is very unstable, and some even do not support the most core functions of RCS. As a result, the current deployment of RCS is a mess, the user experience is inconsistent, and the popularity is very high. not ideal.

But who doesn’t have two or three devices online these days? iMessage recognizes email and can send and receive messages on all devices signed in to the same Apple ID. Taking a step back, even WeChat supports dual client login on mobile phone and computer. RCS can’t do this…

Let an Apple, who has been more advanced than RCS for many years, ride a donkey to support RCS: what do you mean by saying that Google’s approach is not the “old six”?

Second, it’s not that Google doesn’t know about RCS.

And it now calls itself the leader of the alliance + chief promotion officer. In fact, it has other plans: what Google promotes, and what it forces Apple to accept, is not the public version of RCS, but its own derived and improved “customized version”.

The functions that the “public version” mentioned just now does not have, Google’s customized version already supports it. For example, Messages, the native SMS application of Pixel phones, already supports end-to-end encryption, and it also uses the method of scanning QR codes to log in, barely realizing multi-terminal login. 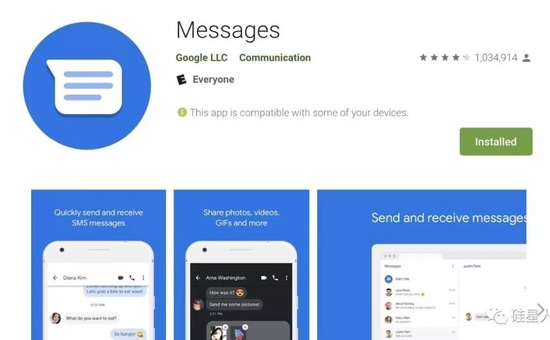 But now this customized version of RCS is just made by Google itself to improve the Android native SMS experience. It is not an industry standard for RCS, and Google has not open-sourced it, nor has it opened its API to other third-party developers interested in RCS.

The official page of Google’s customized version of RCS does not provide relevant APIs and usage documents. The only external manufacturer that has been “loved” by Google and can use customized RCS-related services is Samsung, which is also a company that cooperates very closely with Google’s Android underlying system developers. Don’t think about other companies.

Eric Migicovsky, the former founder and CEO of Pebble, a well-known smart wearable company, who later became an IM entrepreneur, also revealed that Google not only does not have an API, but also does not even have a roadmap for developing APIs:

“This defeats the purpose of designing the whole system. Only the native SMS apps of Google and Samsung support RCS. If our product wants to support it, we have to build a complete RCS system, possibly with a backend like a carrier. If I understand correctly, it is impossible to develop a third-party chat application that supports RCS right now.”

The facts are already very clear: as a company that has always only lost in the IM track, Google doesn’t care about the real popularity of RCS, and what qualifications does it have to ask the winner Apple to condescend to you?

In the end, Google’s crazy Amway for RCS is still full of illogical claims and empty evidence. It is not so much that GetTheMessage planned to support users this time, in fact, it is more like a self-shame show of self-consciousness…

Alas, I hope Google can pull back from the precipice and understand it sooner: the sixth child is simply yourself!

This article is reproduced from: http://finance.sina.com.cn/tech/csj/2022-08-13/doc-imizirav7961758.shtml
This site is for inclusion only, and the copyright belongs to the original author.