When writing the interim reports of other companies, I will communicate with the company in advance. Jin Mao’s words will simply talk about his impressions based on his impressions.

First of all, this is an interim report that obviously exceeds expectations, and it reveals some important information. 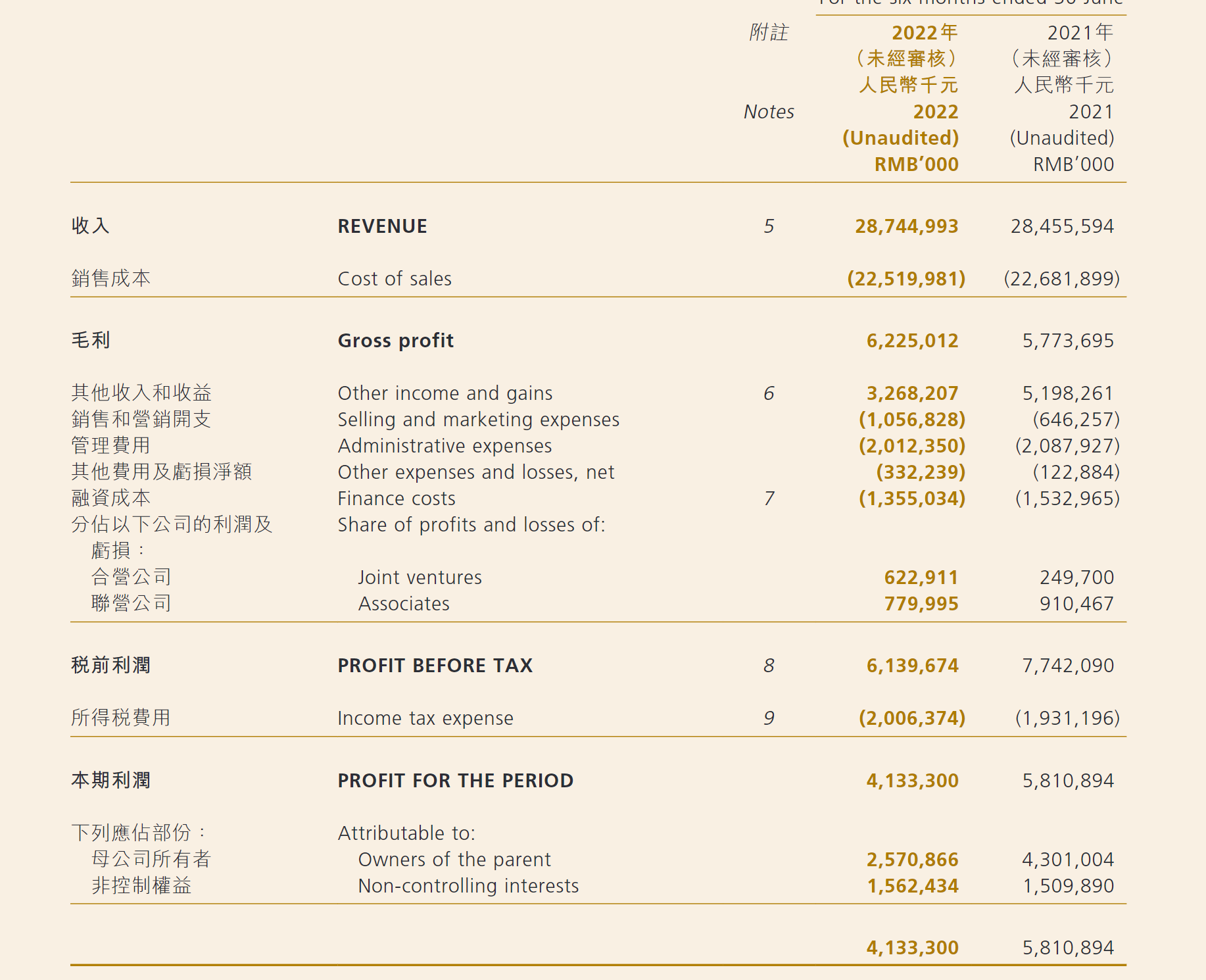 The company’s revenue was 28.7 billion, basically flat year-on-year. I think the reasons for the lack of obvious growth are nothing more than a few points: 1. The company’s settlement has always been less in the first half of the year and more in the second half. At the performance meeting, Mr. Jiang also said that there will be nearly 60 billion in preparation for the second half of the year; 2. This year’s sales have slowed down , the company’s sold and unsettled storage tanks have insufficient water, so the speed of collection is slowed down; 3. In the first half of the year, all kinds of extreme abuses in the general environment were concentrated, which affected the company’s completion and the owner’s repossession.

The sharp increase in sales expenses should be due to the fact that it was indeed difficult to sell in the first half of the year, and the company made a lot of investment in sales, such as discounting or using various marketing channels. Management costs are basically maintained, so there is no need to criticize this. It is said that they should be appropriately reduced. The cost of financing continued to decline, mainly because the cost of capital continued to decline. From 4% to 3.76%.

The increase in income tax shows that the company’s gross profit has indeed rebounded.

The final attributable net profit has a year-on-year decrease of 40%, which is a decrease of 1.7 billion. It looks scary, but it has nothing to do with real business performance. In the middle of last year, there was a one-time acquisition income of 1.66 billion from the privatization of Hongtai. This is equivalent to spending 3 billion to buy a company with a net asset of 4.6 billion. The extra 1.6 billion is useless, but the accounting method is reflected in the income statement. . There is no natural profit decline this year without this income. And in previous years, when the market was good, there would be some income from transfer projects in other income, and this year is also impossible.

The dividend of 9 cents per share is a real positive, and it is also the best proof of the fundamentals.

In the first half of the year, the sales amounted to 69.9 billion, and the payment was 73.3 billion. Sales aren’t great. However, the company also said that the basic sales in first- and second-tier cities in the first half of the year had little impact, mainly in 345-tier cities, which were difficult to eliminate. So the company has tried to strike a balance between profit margins and sell-through rates. The gross profit of sales corresponding to this removal rate is about 13%, which is really miserable, everyone is miserable!

Office rental income was 720 million, a year-on-year decrease of 5%, which was acceptable.

The hotel revenue was 510 million, down 40% year-on-year, which is also a completely conceivable result.

Interest-bearing liabilities were 114.1 billion. Compared with the annual report, it has increased by 8 billion, but it has also repaid almost 8 billion perpetual bonds.

Cash plus restricted cash was 42.3 billion, an increase of 2.7 billion from the annual report. The performance of cash and interest-bearing liabilities shows that Jinmao’s capital position is very good. I was worried that Jinmao’s urban operation model would be backlashed in such a large environment. After all, many people questioned that this model consumes cash. But the mid-term report allayed those concerns.

Sold and outstanding 288.5 billion, 13 billion less than the annual report, but the equity should be improved.

There are 5 discussions on this topic in Snowball, click to view.
Snowball is an investor’s social network, and smart investors are here.
Click to download Snowball mobile client http://xueqiu.com/xz ]]>