Just now, the “automobile robot” in Li Yanhong’s mouth was officially unveiled – but it was in the “Metaverse”.

Although it cannot be transformed into Optimus Prime and Bumblebee like Autobots, Jidu’s first concept car ROBO-01 was born with high-level autonomous driving, which has become one of the hot topics in the industry.

Xia Yiping, CEO of Jidu Automobile, also said that Jidu’s target users “are more like the early users of Apple mobile phones and DJI drones, those who perceive the first wave of smart technology products.”

It will take a few months at the earliest before users actually see the real car.

What is “Automobile Robot”

Although the appearance of this car robot is not in the form of a physical car, it also reflects Baidu’s thinking in car-making to a certain extent, and what the subsequent mass-produced and delivered models may look like.

According to Xia Yiping’s introduction, the design of ROBO-01 interprets the three concepts of futurism, robotics and empathy.

The ROBO-01 with a streamlined body is equipped with butterfly wing doors for the main and auxiliary drivers, rear side doors, and non-marking side windows. The elimination of physical control keys such as door handles, shift levers, and left and right levers in the whole car is more technological and futuristic. sense. 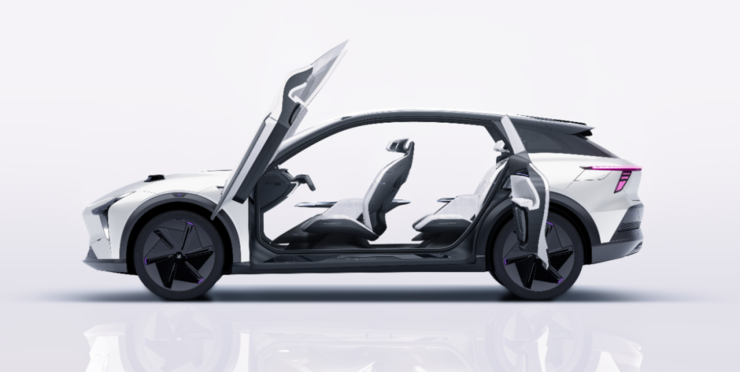 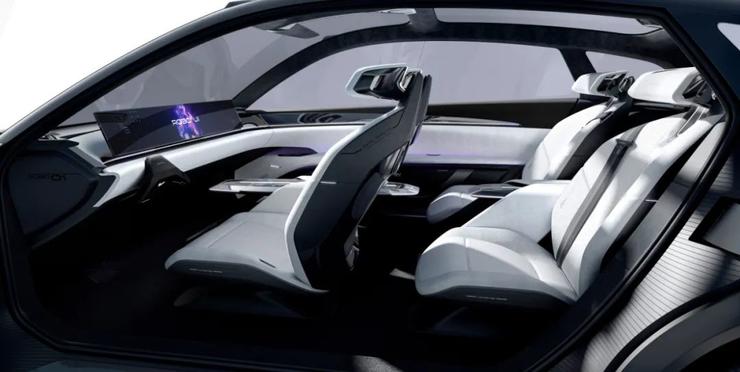 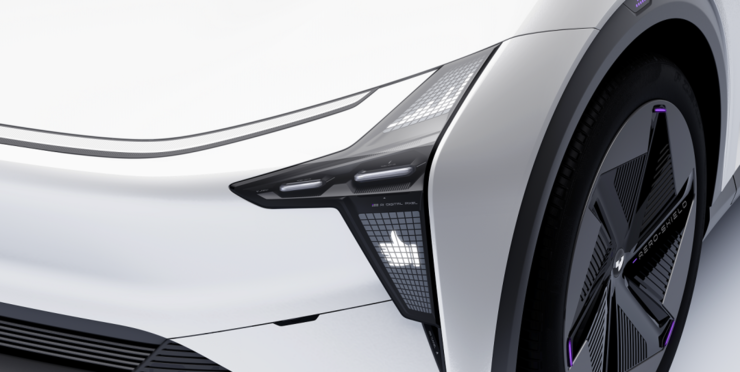 Of course, the real focus of Jidu is definitely not design, and intelligence is also a key part. 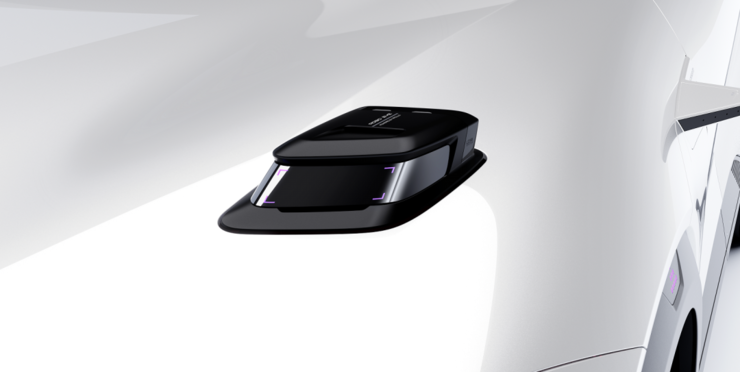 Jump-light, liftable and collapsible lidar located on the front cover

In terms of intelligent cockpit, the integrated “millisecond-level” intelligent voice response can achieve 100% full scene coverage inside and outside the car, and the “full offline” intelligent voice function can make the vehicle free from the influence of network signals.

In addition, Jidu will also release the design of its second mass-produced model at this year’s Guangzhou Auto Show.

Building a car, Baidu is under pressure

It is not an exaggeration to describe Baidu’s car-making as a starry night.

Looking at it, in March 2021, Jidu Automobile was officially established, and Xia Yiping was the CEO, carrying the banner of Baidu’s car manufacturing; in June, the photos of the clay model were exposed for the first time; in August, the cooperation with Hesai and the mainland was announced; in September, SIMUCar (Software integrated simulation prototype) Road test exposure…

In addition to the extremely fast car-building process, Baidu is also putting more resources into the field of car-making.

On May 24 this year, according to media reports, Baidu’s map business, which was originally in charge of Baidu CTO Wang Haifeng, has been adjusted to Baidu IDG (Intelligent Driving Business Group). In the personnel system, Ji Yongzhi, general manager of Baidu Maps, had to report to Li Ying, chief information officer of Baidu. Now Ji Yongzhi will report to Shang Guobin, vice president in charge of Baidu’s Intelligent Transportation Division (ACE).

All signs show that even with Apollo in the military and years of experience in automotive intelligence, Baidu seems to be under pressure to build cars.

Under the impact of the epidemic, industries where live broadcast, retail, catering and other advertisers are concentrated continued to be weak, and the national advertising business as a whole showed a downward trend, and the advertising revenue of Tencent and JD.com declined. Baidu, whose core business is advertising, has not been able to survive alone. According to Baidu’s first-quarter financial report, its core business revenue was 21.4 billion yuan, of which network marketing revenue was 15.7 billion yuan, a year-on-year decrease of 4%.

However, Baidu’s R&D investment has not been reduced. In the first quarter, Baidu’s core R&D investment was as high as 5.1 billion yuan, accounting for more than 20% of core revenue for six consecutive quarters. Li Yanhong once said in 2021: “They all underestimated the R&D investment in autonomous driving. Baidu invested 20 billion last year alone, and this may take 10 or even 20 years of long-term investment.”

Revenue from old businesses declined, while investment in new businesses continued. This may be the reason why Baidu builds cars so quickly.

In addition, according to the financial report, in the first quarter, Baidu’s Carrot Run provided 196,000 rides, making it the world’s largest self-driving travel service provider.

At the performance exchange meeting, Li Yanhong also revealed that in the first quarter of 2022, the intelligent driving business ASD and the in-vehicle infotainment system Xiaodu in-vehicle OS, etc., received a total of 10 billion yuan in fixed-point and contracted projects.

It can be seen that Baidu’s self-driving business performance has become an important factor for the capital market to evaluate its investment value.

Baidu’s speed in building cars is quite a sign of showing off its muscles to the market. But the appearance of ROBO-01 is not just to make the market lively for a while, occupying a certain market share is the ultimate mission of ROBO-01.

How to sell? This is a problem

According to sources, Li Yanhong paid special attention to Baidu’s car-making business, and his OKR clearly wrote the pre-order target to be achieved by Jidu Auto this year.

From this conference, ROBO-01 has made a lot of efforts in AI intelligence, but whether these technologies can be converted into sales data is still a problem.

In order to occupy a certain market share, ROBO-01 faces two difficulties. On the one hand, it is how to gain a firm foothold in the market surrounded by strong players, and on the other hand, it is to let consumers at this stage accept “intelligence”.

From the perspective of competitors, it can be said that it is difficult for Jidu ROBO-01 to find a way among the many new forces.

When Baidu officially announced the car, Wei Xiaoli’s annual sales had already exceeded 10,000. The first models to enter the market will inevitably form brand recognition in the minds of consumers. Even if Baidu, as the first company to deploy autonomous driving in China, wants to come later, it is an extremely difficult task to complete.

What is more noteworthy is that as of the end of May, the cumulative delivery of Wenjie M5 exceeded 11,000 units, setting a new record for the fastest delivery of a single model of the new brand exceeding 10,000 units.

How to choose the autonomous driving solutions of Huawei and Baidu has always been a topic of close attention in the industry. The Qjie M5 equipped with Huawei’s solution has obviously put a lot of pressure on Baidu to deliver such an excellent answer sheet.

Not only that, in terms of specific models, the 200,000 yuan market targeted by ROBO-01 is also a must for car companies. At this stage, BYD Song plus and Xpeng P5 are two insurmountable mountains, not to mention the A large number of models are preparing to station.

In the future, the goal of the friend-seller Xiaomi is also this market.

How to play steadily in this market has become one of the issues that requires in-depth thinking.

In addition, on the consumer side, although the industry generally believes that the future will enter the era of “software-defined cars”, software will become a key consideration for consumers when purchasing a car. But at this stage, software may not be the first choice for most consumers to buy.

Not only that, but even with a car with driver-assist features, the owner doesn’t necessarily use those features very often. And having too many features isn’t necessarily a good thing. At this stage, ordinary consumers also need to improve the use and trust of assisted driving functions.

According to relevant survey data, up to 80% of car owners are worried that intelligent functions will lead to abnormal vehicle control, such as sudden acceleration and deceleration of the vehicle itself, turning, etc.; More than 60% of car owners are worried that the wrong prompts from the intelligent system will affect the driver’s decision-making.

Therefore, in terms of intelligence, which is the main focus of the set, the degree of security that ROBO-01 can achieve is one thing, and whether consumers can buy with peace of mind is another.

However, there is no doubt that the penetration rate of autonomous driving continues to increase. Data shows that in Q1 2022, the assembly rate of L2 and above autonomous driving functions for Chinese passenger cars will reach 30.1%, a year-on-year increase of 12.7%.

In the future, as the concept of “software-defined cars” continues to gain popularity, it is not impossible for AI-intelligent-focused automobiles to attack and overtake on curves.

The industry generally believes that the first half of car building is new energy, and the second half is intelligent network connection. When car manufacturing enters the second half, the advantages of enterprises in AI intelligence will become the core factor for winning.

Needless to say, the AI ​​ability of the set degree, but whether it has entered the second half of the car building at this stage is still a question worth discussing.

After all, as Xia Yiping said: “Making a car out of nothing is just the part of the iceberg exposed above the sea level. Under the sea, including factories, production capacity coordination, supply chain management, building sales channels, and delivery centers, these The complexity of things goes beyond even developing the car itself.”

Wenjie M5 has become a jewel in the front, and Xiaomi is eyeing it in the back, and building a car robot concept car is only the first step in the long march of Jidu.

This article is reproduced from: https://www.leiphone.com/category/transportation/Xt5kmwYHwKAk0D6E.html
This site is for inclusion only, and the copyright belongs to the original author.