The familiar debate between genuine and cracked versions.

Buying membership services for video sites and music software, subscribing to XGP or Ubisoft+ to enjoy more games and value-added services, this subscription model is believed to be common to everyone.

But when it exists in people’s daily life in another more “advanced” form, it may trigger different reactions. Not long ago, Mercedes-Benz officially launched a paid-to-unlock program. The promotional poster showed that owners of a certain type of car can pay 4,998 yuan to enjoy a one-year upgrade of the rear wheel automatic steering angle, which is to increase the original 4.5 ° to 10 °, turning The diameter is reduced to 10.9 meters, making it easier for car owners to turn around on narrower roads. 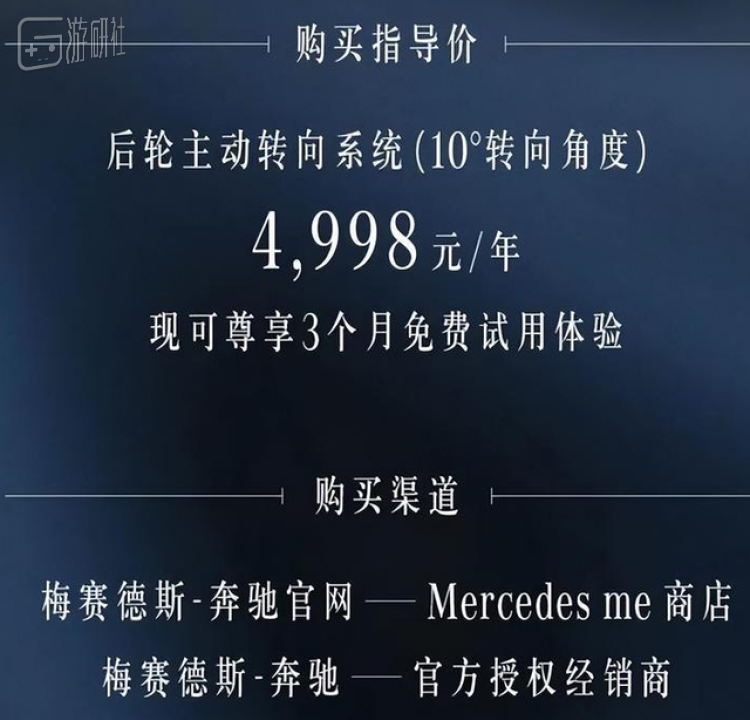 As soon as the news was announced, it aroused extensive discussion among netizens. Gamers are obviously more familiar with this seemingly outrageous practice, and soon found an easy-to-understand metaphor:

However, ridicule is ridiculed, the “subscription value-added service” of automobiles has actually come before this storm, and many car owners are also resisting in their own way.

The reason why Mercedes-Benz’s subscription service incident has aroused extensive discussion or criticism in China is that the service itself is the root of the pursuit. The benefits of this service are not intuitive to people who don’t know much about cars, but the price is too high to understand. .

And for Mercedes-Benz owners, this is not something that “people who can afford a Mercedes-Benz don’t care about the money” can just prevaricate it. Before distinguishing between “value-added services” and “wasting money”, most car owners may not be willing to pay the money without knowing it. In fact, Mercedes-Benz is not the first company to implement subscription services, but is only one of the trend of car subscription service models in the Internet era.

Previously, another car company, BMW, was also reported to have launched a front seat heating service in South Korea and other regions. The service is divided into monthly payment, annual payment and other price gears. A monthly subscription costs $18 per month, or Owners can also pay $415 outright to buy out lifetime access. 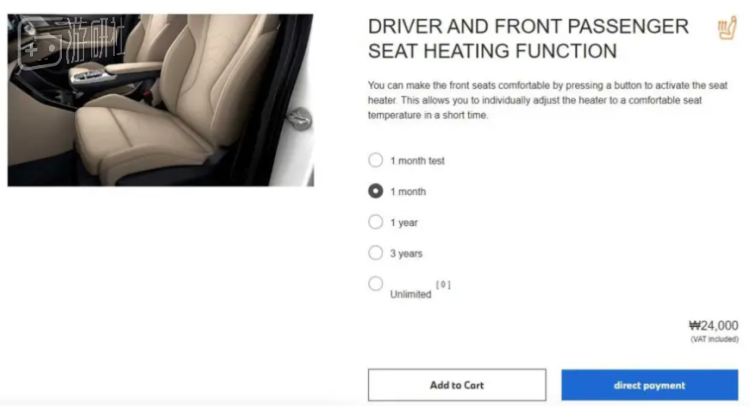 This news also made it to the Twitter hot list, and the criticism of foreign netizens was even more intense. After all, this feeling is almost exactly the same as the “micro-transaction” familiar to players. It is called “bought a car, but not fully bought” in a common domestic saying, and for gamers, a lot of memes used to ridicule the payment model of modern games in the past can be said to be true at some levels: 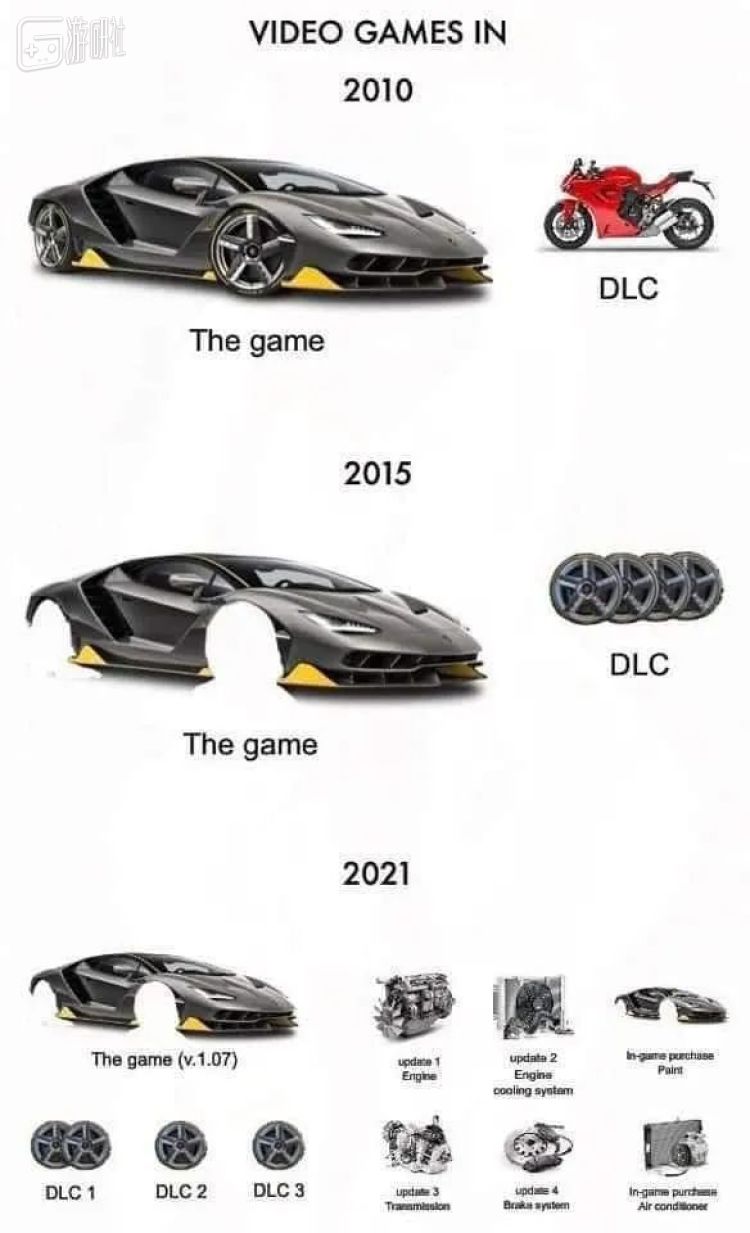 The rise of subscription services in the auto industry can be said to have been brought about by Tesla. Tesla’s value-added subscription services can be described as bells and whistles, ranging from automatic driving to steering wheel heating, setting a new standard for charging in this industry. Previously, the public still had an attitude of “you play your way, you can accept it”. 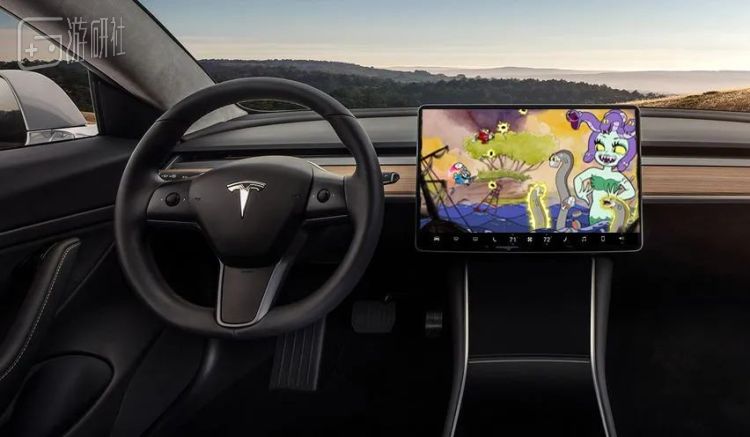 After all, there are not many cars that use “you can play “Cup Head” as a selling point

But when traditional car companies keep up, users are less forgiving. Such a detailed charging method is really surprising for a brand like BMW. 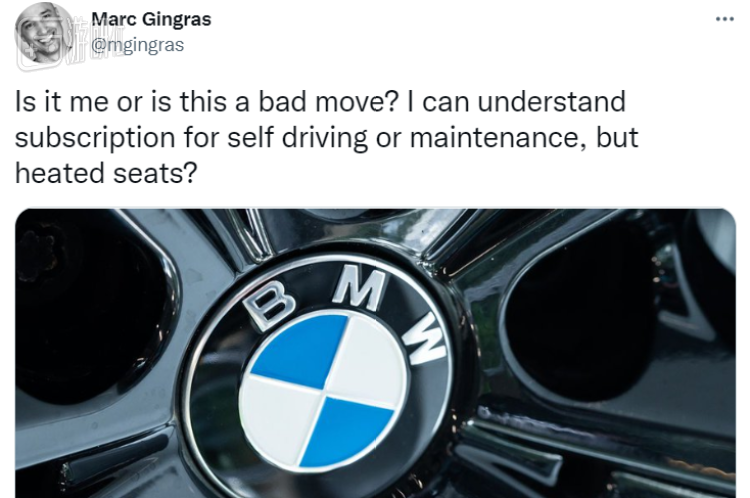 “I can accept paying for a subscription to services like self-driving, but what the heck is seat heating?”

Just as players will criticize the function that should have been turned into a paid service, car owners will inevitably guess whether this subdivided subscription service will deteriorate in the future, further opening the “Pandora’s Box” and allowing consumers to face More paid items.

“You need a subscription to unzip the jacket”

Not only that, when some subscription services may affect the driver’s driving habits (such as the rear-wheel steering mentioned above), then the car owner encounters the subscription service expiration while driving, and how to avoid affecting the driving safety is not just a hell joke. .

“When Forgetting To Pay For Your BMW Airbag Subscription”

A few years ago, BMW announced that it would charge owners $80 a year to use Apple Carplay on BMWs. This incident once angered many BMW owners and netizens in Europe and the United States, because many of the essential functions in the eyes of car owners have been used for free for a long time. And compared with the full-featured service such as Tesla’s advanced in-car entertainment service package (with its own HBO, Twitch and other streaming media), which was announced to be charged at the time, BMW, which only charges for the display of Carplay on the car machine, seems to be too much. Especially ugly.

The outrage that caused BMW eventually backed down and the service went back to free. But apparently BMW hasn’t given up on subscription services, and has since implemented a subscription service system for features such as auxiliary automatic high beams or adaptive cruise control. 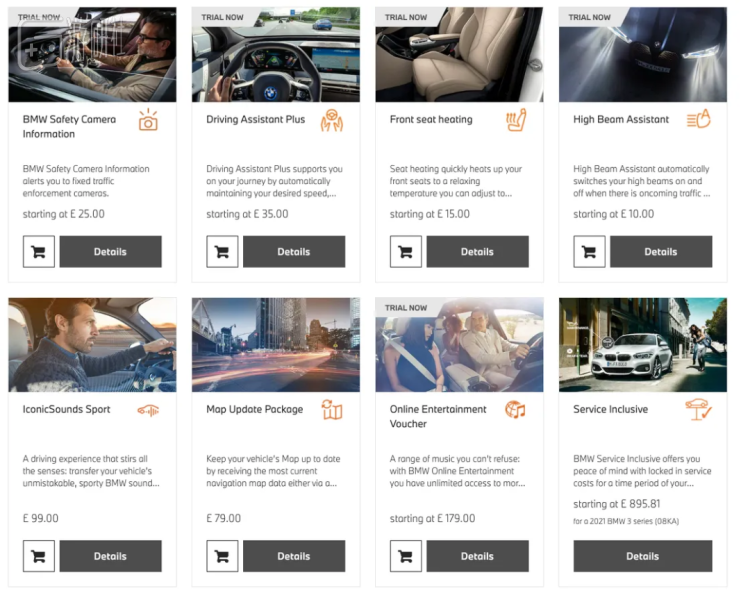 As for why traditional car companies have begun to think of subscription services, the answer is obvious, it is better to make money. Also recently, analysts at Morgan Stanley said that Apple’s business model next door is shifting from a hardware company to a subscription service, a shift that could make Apple worth more than $3 trillion.

Compared with Apple, traditional car companies have higher user stickiness. Therefore, following the example and launching subscription services is obviously a good way to open source for the auto retail industry, which has always been restricted by various forms such as raw material costs. The revenue problems faced by developers in the new century are the same.

But from the user’s point of view, it is not easy to quickly accept the concepts of “DLC” and “micro-transactions”. Because it means that the hardware that the car owner has already paid for, also needs to pay another amount to unlock the software before it can be used.

What more netizens care about is that most of the subscription payment items that have been dismantled are currently non-essential functions, but no one can guarantee whether the charging items of car companies will be extended to basic functions. When a Tesla user claimed that his available range had been cut by a third without warning, when he asked to restore it, officials asked him to spend $4,500 to unlock it. 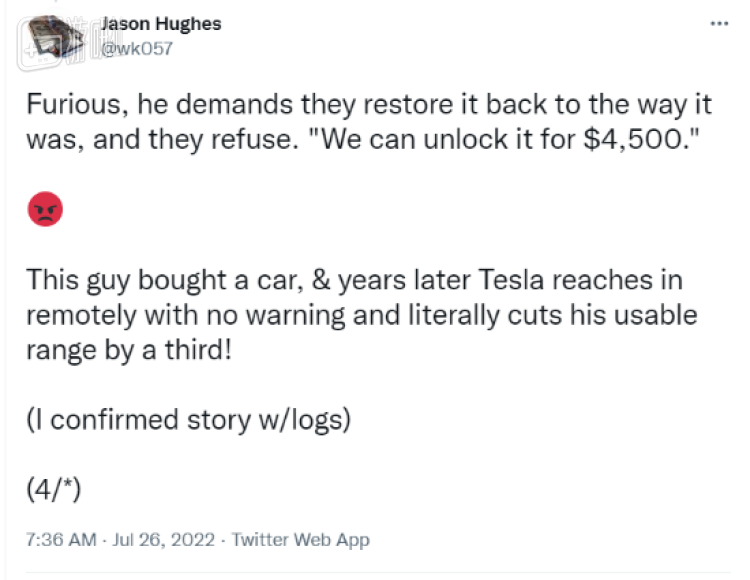 It is not difficult to imagine that car owners at home and abroad are all disgusted with the upcoming wave of subscription services. Fortunately, people still have some ways to deal with it at this stage, and that is to use the “cracked version”.


In the past few years, many car brands, including BMW, have launched subscription services for some key functions to varying degrees, but they have encountered strong resistance from consumers, and finally, like the BMW Carplay mentioned above, they have been criticized by public opinion. Endless.

But if public opinion cannot change the official strategy, since everyone is taking the digital route, then “cracking” is a feasible way for everyone to be familiar with it. Shortly after the BMW heated seat incident, hackers publicly promoted the method of cracking BMW hardware functions, and many netizens who have always maintained genuine versions also publicly expressed their support for this behavior. 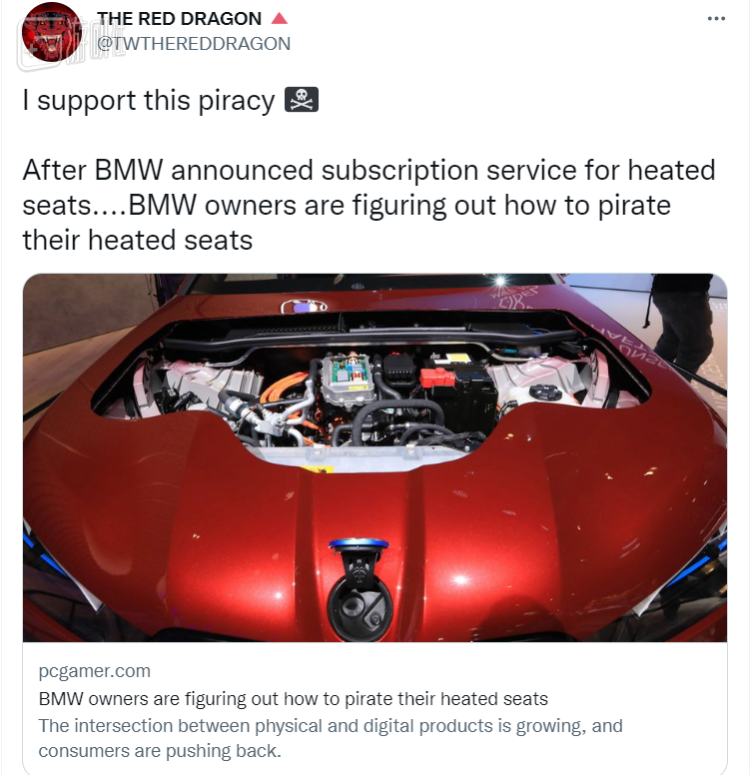 At the same time, a number of modification agencies even publicly stated that they can unofficially activate the BMW system, and the price will be much lower than the official subscription price.

Litchfield Motors, a well-known British automotive performance center, is an organization specializing in performance upgrades and adjustments to vehicles. Its head publicly stated in a media interview that “it can be done” to crack BMW’s service.

Litchfield Motors excels at unofficial cracking of subscription services or hardware limitations of various car brands. For example, users can enable Carplay for only £40, or unlock the engine management system restricted by the manufacturer to add more power to the vehicle.

Litchfield Motors also revealed that cracking a BMW’s seat heating system is actually similar to cracking a smartphone’s lock code, because the business is too simple and the fees are not high, and some tuners are even reluctant to undertake such a business.

Some hacking communities have also joined the cracking bandwagon, claiming to be able to crack the features they need for car owners. Many car owners have long relied on these hackers, active on enthusiast forums and promoting their businesses on shopping sites, to solve specific problems or add features to electric vehicle systems.

It’s not hard to imagine that the digital service for cracking trams also has a “long” history. This also starts with Tesla, the leader in car subscription services. Tesla has been facing the problem of compromised in-vehicle systems. Many technical experts are committed to breaking the restrictions and accessing applications that did not exist through the car.

But not everyone hacks a car’s system for the “fun” reason, and there are others who have to.

In 2020, Tesla remotely removed the advanced driver assistance system of a newly traded used car owner without notice. But owners paid for the feature when they bought the car from a dealership, which totaled $8,000. The feature was removed, meaning owners would have to pay more to get it.

The used car problem has sparked a fierce struggle among Tesla users for a period of time. Some people simply turned to the gray market for help and resistance, and obtained the functions they wanted once and for all by “jailbreaking”. 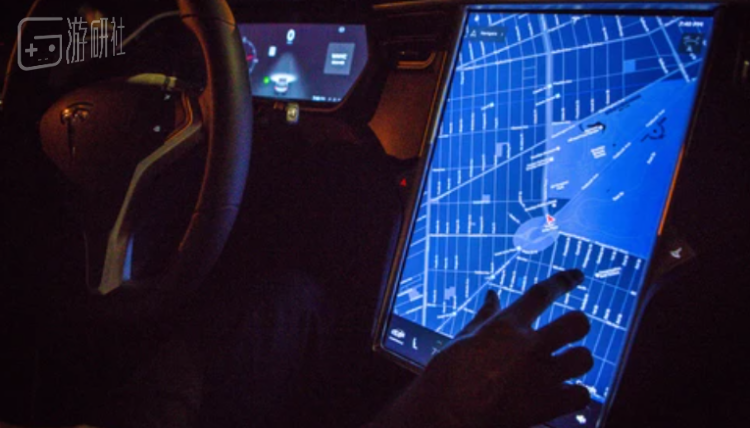 Of course, “cracking” and “jailbreaking” come at a price. Automakers have long stated that any changes to the system will void the owner’s warranty. What is even more worrying is that cracking the on-board system of the tram may affect the on-board computer. According to the official statement, random cracking may also cause safety problems in driving.

Whether such a transformation is worthwhile is an account that car owners have to weigh.


After the arrival of the era of smart cars, the product of automobiles has recently gradually moved closer to digital products.


The improvement of software functions and hardware functions was originally supposed to provide people with more convenience, but now the paid value-added functions clearly marked in front of people’s eyes have caused unprecedented concerns.

Even if domestic and foreign car owners and users have expressed their resistance to the subscription services of traditional car companies, such a payment trend is still irresistible. Maybe these charging functions are not used by car owners yet, or they may go deep into all aspects of the driving process under the setting of car companies in the future. The entity of the car to the consumer itself seems to have developed a very similar A new concept of payment for the modern gaming industry.

But the problem is that no matter how the game industry innovates its charging model, it is still a “virtual economy”, and cars are physical. It is difficult to say whether the “cracked version” will occupy a place in smart cars in the future. For people who are dissatisfied with the charging model of car companies, this may not be a long-term solution. The only thing that makes people think about it is that there is still a lot of justice to be discussed about the concept of “genuine” and “pirate”, at least in cars.

This article is reproduced from: https://www.yystv.cn/p/9530
This site is for inclusion only, and the copyright belongs to the original author.