When you are trapped by the past, do you keep your memories forever, or face the demons in your heart?

Under the lamp, a little boy was lying on his back, with a doodle collection, a notebook, a stack of tissues, and a human-like black cat beside him.

In addition, the entire world is filled with flawless blanks, and there is nothingness as far as the eye can see.

The protagonist in “white space”

After the boy talked to the black cat, the world trembled a few times, and a sharp knife appeared out of thin air. He picked up the knife, and a door to the outside became open.

Different from “white space”, the world outside the door is psychedelic and colorful, but the hidden crisis in it makes it extremely difficult for the boy to take a step.

“This time is different,” the boy thought to himself, holding the knife in his hands and walking out the door.

The journey of “OMORI” begins from now on. In about 20 hours of game time, players will witness a fable about family, friendship, memory and fear, a fable about autism and reconciliation, which is extremely heartbreaking but moving s story. 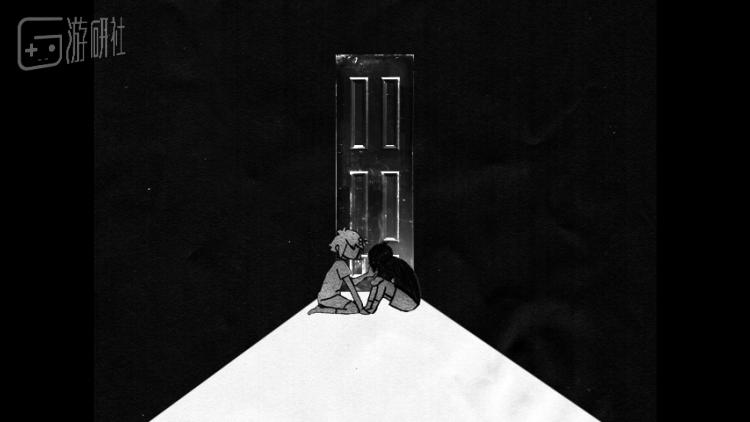 The boy has the same name as the game, called Omori, and for most of the game, the player has to control Omori and his three friends – Kai, Aubrey and the hero (you read that right, he is called “hero”), Adventure in a vast land full of whimsy.

It’s not hard to notice that Omori is out of tune with his surroundings: he’s all black and white, he can’t speak, his eyes don’t focus, and the knife in his hand is too sharp for a fairy tale world. But his friends, and all the other NPCs, were unaware of Omori’s anomaly.

Because Omori is the creator of this world, he himself is the projection of the heart of the real boy Sunny (default name, which can be customized). For some reason, Sunny’s temperament changed a lot a few years ago, and then he stayed out of the house for a long time. Every night, Sunny turns into Omori in her dreams. The dream world that players explore can also be seen as Sunny’s subconscious. 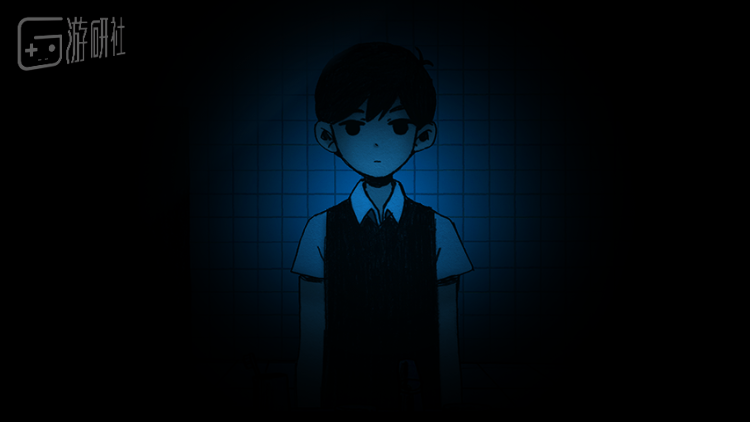 Sunny in the mirror

The purpose of the protagonist’s adventure is to find the missing Bethel , a boy who loves gardening and photography, and has a neutral and weak appearance. He is a member of the protagonist’s circle of friends, and he often takes pictures of his friends. Most of the photos contain good memories, but some of them are infiltrated with ominous things. Bethel disappeared from Sunny’s dream after coming into contact with the unknown. 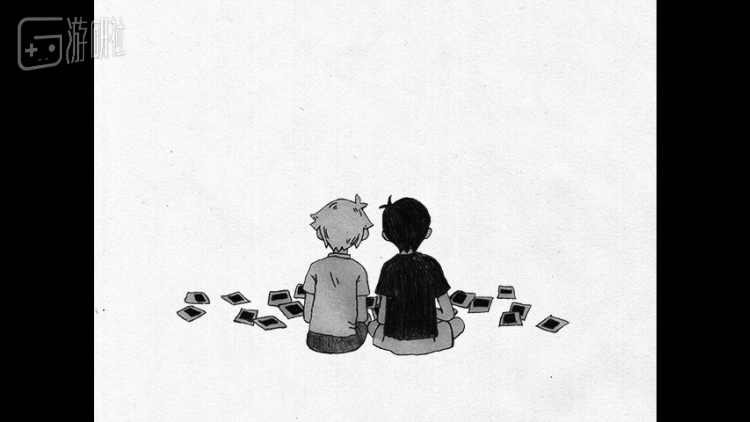 Sunny and Bethel are looking at photos

Besides Omori and his friends, sister “Mari” is also an important character in the game. When the protagonists are exhausted, seeing Mary and her red and white checkered picnic cloth is the greatest consolation. The appearance of Marie not only shows that there are save points and recovery points ahead, she is also a gentle and considerate person: if the protagonist group forgets the mission goal, Marie will give guidance; and when Omori is afraid, Marie will always come forward Reassure and encourage.

Putting Mary in such an important place in his mind, Sunny’s relationship with her must be extraordinary in reality. The mechanism that Marie can appear everywhere as an NPC also creates an unnatural sense of dislocation between the fact that the protagonist group can only get there by overcoming all odds. She is also the key to advancing the plot and uncovering the mystery. 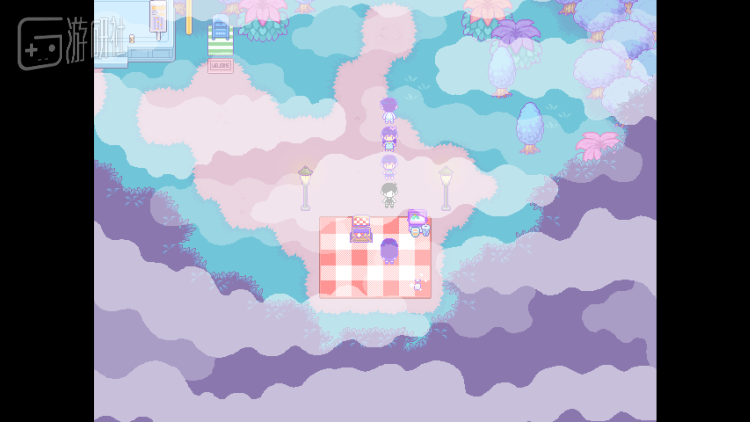 Mary in the game, with her picnic cloth

Bethel is a photographer, a recorder. His disappearance means that Sunny has sealed some memories in the deepest part of his brain. The process for players to find Bethel is to explore the true face of Sunny’s inner demon. The closer you get to the truth, the darker the subconscious world becomes.

Facts are often cruel, and the choices players make at key plot nodes will determine the fate of Sunny and Bethel. “When you are trapped in the past, do you keep your memories forever, or face the demons in your heart?” This is the game proposition that “OMORI” throws to all players.

A few years of self-isolation drove Sunny to polish his inner fantasy to perfection, allowing him to create a magical fairy tale world to seal some unbearable memories. Aliens of different shapes, animals that speak human words, and colorful decorations and objects can be seen everywhere in his world.

The world in a dream is not bound by rules. On the protagonist’s journey in pursuit of Bethel, there are multiple areas to be traversed, each of which is full of children’s imagination: a settlement on the moon with dolls as houses, a pink castle where a narcissist lives, sharks and Undersea resorts run by crocodiles, research institutes in whale stomachs…

On the way, you will encounter some hostile creatures, and the turn-based battle with them is the main gameplay of “OMORI”. As an emotional-themed RPG, OMORI uses three emotions as the core of the combat system:

“Happy” is a good thing, but it is also easy to get carried away, so it can improve the character’s speed and critical strike rate, while reducing the hit rate. People in the “angry” state are more impulsive than usual, and will increase attack and defense. While “sadness” makes people close their hearts, it will also suck people’s energy, and the affected characters’ defense will increase, but the damage they take will be partially converted into vitality (MP) damage.

The three of them, in the order of “happy → angry → sad”, constitute a relationship of mutual restraint. 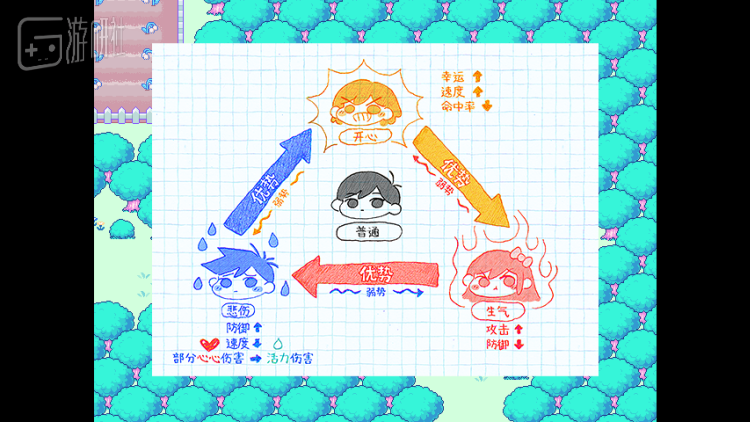 A Simple Explanation of the Emotional System

The game’s shaping of the characters of the three friends is largely integrated into their respective skills: Aubrey is a girl full of energy, who can make her companions happy by cheering up; Kai, the “bear boy” who likes to play ball , friends get upset if they are harassed by him; the hero is a few years older than the others, good at cooking and charming, and can heal everyone in battle.

In addition, the four also have their own exploration skills. For example, Kai can activate the traps that other friends can’t touch by throwing baseballs. When you encounter obstacles in the world, you have to change the corresponding role. This design adds some depth to the puzzle-solving elements of OMORI.

During the battle, after their turn is over, the four protagonists can consume the team’s energy bar and use “coupling skills”: usually the interaction with one other person, and the effect is based on the relationship between the characters and the characters. As the journey progresses, the bond between the four of them deepens, and their linking skills will also be enhanced. And when the team’s energy gauge is full, the team’s ultimate move can be cast.

As an independent game developer, the creators of “OMORI” do not have the funds and technology of 3A big factories. Compared with the accumulation of special effects, they chose to use various design ingenuity to improve the expressiveness of their stories.

Unlike many turn-based games, where the two sides of the battle are placed on both sides, in the battle session of “OMORI”, the protagonists are placed in the four corners, and the enemy occupies the center of the screen. This design leaves plenty of room for hand-drawn animations to showcase enemies, and makes many skill performances seem out of the norm.

The monster design of this work is very cute and unique at the same time: they all have real-life counterparts, which were created by Sunny subconsciously, and retain the characteristics of the prototype. For example, the muscle-knotted, freedom-hungry Pluto is wanted in the game for escaping the solar system. This setting obviously refers to the fact that Pluto is delisted in reality. 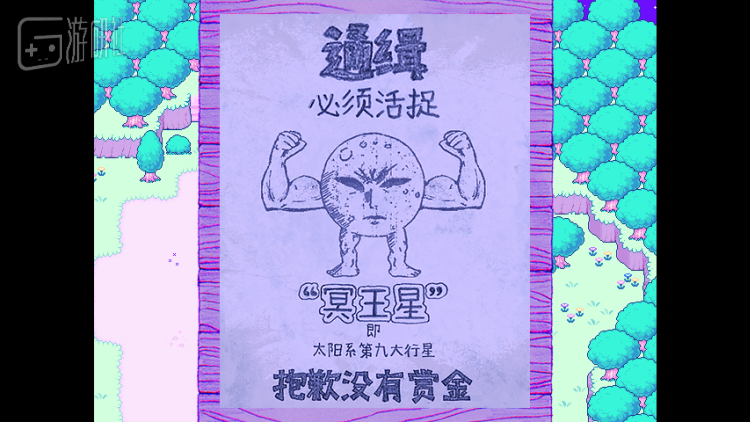 solar system planet on the run

Some of these monsters also have meta elements: in a certain scene, when the protagonist group steps into it, the game will freeze for a few seconds, and then a pop-up window will pop out to fight the protagonist group. Perhaps the creators recalled their deep abhorrence of computer crashes, and thus designed this enemy that made people smile at first sight.

The unique expressive power of “OMORI” is not only reflected in the battle. When Sunny woke up in the middle of the night, his bad mental state distorted his vision. For some reason, even going down the stairs was difficult for Sunny. Some of his fears also turned into black shadows with fangs and claws, trying to defeat him. These expressions of negative emotions will intensify as the game progresses. 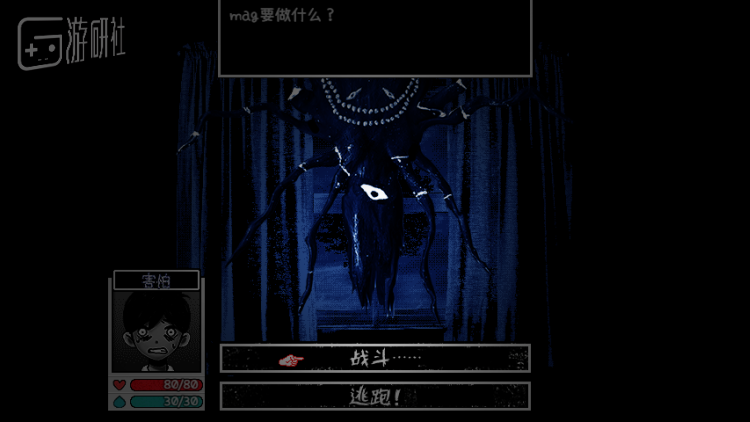 Exploration in reality is another big part of the game experience of “OMORI”: after overcoming his fear and getting through the night safely, Sunny can walk around the town where he lives, help neighbors, do odd jobs, and teach the town a lesson. gangsters, or play rock-paper-scissors with the townspeople with electronic pets.

But for some reason, Sunny’s time in town is running out. In a short period of time, reconnecting with the former childhood sweethearts and digging up the buried memories is what Sunny and the players want to do in the small town. 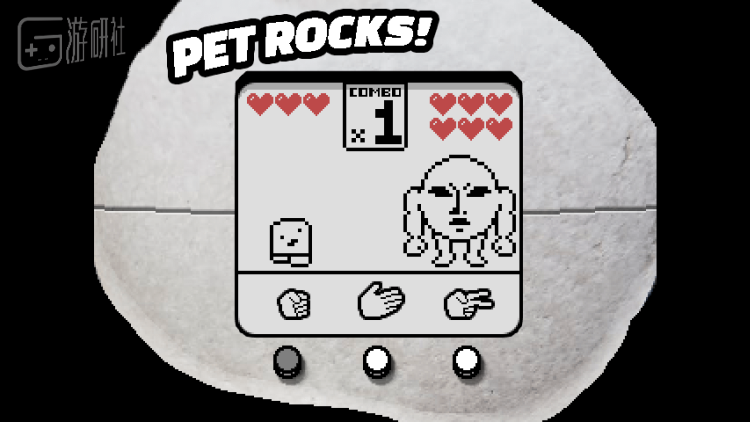 Whether it is adventure in dreams or wandering in reality, every task and every dialogue will bring players one step closer to the truth. In the later part of the story, when the skin of the fairy tale is torn apart and the dusty memories are displayed in front of the player’s eyes dripping with blood, the reasons for Sunny’s autism are at a glance, and the truth is enough to make everyone feel shocked and sad.

“OMORI” was released on Steam on Christmas Day in 2020. A year and a half later, it has been recommended by more than 33,000 users with a 98% favorable rate. This achievement makes it one of the most popular games on SteamDB Top twenty-five.

The producer of the game, Omocat, is an illustrator who has worked for big companies such as Coca-Cola and Bandai Namco. Before “OMORI”, there is no game project experience.

Due to the limitation of team size, the main creators chose RPGMaker as the development platform for “OMORI”. Its success has to make people sigh. On the theme of conveying emotions, RPGMaker has produced too many excellent works: from “To the Moon” to “Hello Charlotte”, to “OMORI”, the three have been completed. A metaphysical inheritance of “platform + emotion = hot sale”.

Contrary to the information on the store page, “OMORI” has been completely localized in Chinese: the mouth fetish and dialect differences between NPCs are expressed through the Northeastern dialect, Cantonese, and even Martian in the lines; English stalks and homophonic jokes have passed Reworked to be more in line with the Chinese context; even the textures in a certain mission have been redrawn and replaced with simplified Chinese.

The lack of main creative experience has added some flaws to “OMORI”: for example, the combat system is slightly monotonous and lacks challenges. For example, the branch line span is too large, and the supplement to the plot is almost zero. Another example is that the plot stopped abruptly after the explosion in the later stage, which made people feel a little unfulfilled.

But these flaws can’t hide its bright spots: bizarre worldview, excellent character creation, detailed depiction of negative emotions, and praise for family and friendship. It makes OMORI complete the story it wants to tell.

It’s not very good in terms of gameplay, but it made my emotions go up and down like a roller coaster during gameplay. This unforgettable experience is unique, and it is enough reason for me to recommend OMORI.

This article is reproduced from: https://www.yystv.cn/p/9026
This site is for inclusion only, and the copyright belongs to the original author.