36氪 was informed that recently, the edge-end video understanding technology developer “Simmir Vision” announced the completion of an angel round of financing of tens of millions, exclusively invested by Atomic Venture Capital. The funds will be used for low-volume production of the company’s hardware products to accelerate the expansion of the application matrix.

Founded in 2019, Simmir Vision is positioned as a software and hardware platform for video understanding at the edge. It is mainly based on the underlying technology of video understanding, through self-developed ultra-simplified network operators and high-efficiency compression technology, as well as chip-level video space-time processing technology. Provide “efficient + lightweight” industry solutions, covering industrial scenarios such as personnel presence detection, process consistency detection, and anomaly detection.

With the increasing demand for safe production and normal production in the new generation of industrial scenarios year by year, how to better improve the standardization and safety of industrial production through machine vision technology has become an urgent problem to be solved. According to relevant market data, China’s traditional industrial vision market for defect detection and primary security monitoring has reached 20 billion yuan in 2021, and is expected to exceed 50 billion yuan in 2026.

However, in industrial event detection scenarios, traditional industrial machine vision and intelligent security systems have two problems: one is slow detection and delay, and the other is high cost.

On the one hand, in high-speed production lines, real-time detection and timely intervention to avoid personal injury and ensure production safety are important goals. However, the computational throughput of video understanding is several times that of a single frame of image, and it is a parallel pipeline architecture. The traditional solution has many data interaction processes and times, and the system delay is large.

On the other hand, the deployment scale of industrial scenarios is large, and traditional solutions need to integrate multiple independent sub-modules. The cost of a set of landing is about 40,000-50,000 yuan, which is equivalent to a medium-scale enterprise equipped with 100 robot workstations. Millions of dollars are invested in the event detection function, which seriously hinders the large-scale implementation of the solution.

Yang Minglun, founder and CEO of Simmir Vision, told 36氪 that if most of the collaborative robotic arm products currently meet safety standards, their movement speed needs to be reduced to the order of tens of millimeters per second, which cannot meet the beat requirements in practical applications. An active defense system is needed to detect the distance between people in real time and guarantee rapid response and intervention.

In response to these pain points, Simmir developed an “industrial AI event camera” based on the platform-based technology of video understanding at the edge. It adopts a lightweight design and plugs in different application modules to gradually cover personnel presence detection and process consistency. Detection, anomaly detection and other industrial event detection scenarios have three characteristics of low latency, high accuracy, and low cost.

This module sinks traditional security to the industrial equipment layer, and develops corresponding products according to industrial requirements and scenarios to meet the requirements of industrial security protection. “We think from the perspective of finality, and hope to eventually lead this market.” Yang Minglun said, so the company did not do an integrated solution, but developed a video understanding camera for security detection in accordance with the principle of the highest cost performance, which can be integrated with industrial Robotic arms, collaborative robotic arms, special equipment, etc.

Specifically, by using the special architecture and operators on the edge side, Simmir Vision’s “Industrial AI Event Camera” can achieve rapid response within 50ms from the occurrence of danger to equipment shutdown, which is 5-10 times higher than the traditional solution, and the recognition accuracy rate is as high as 99.9 % or more, it can also replace physical fences, and the cost and cycle deployment are more cost-effective. 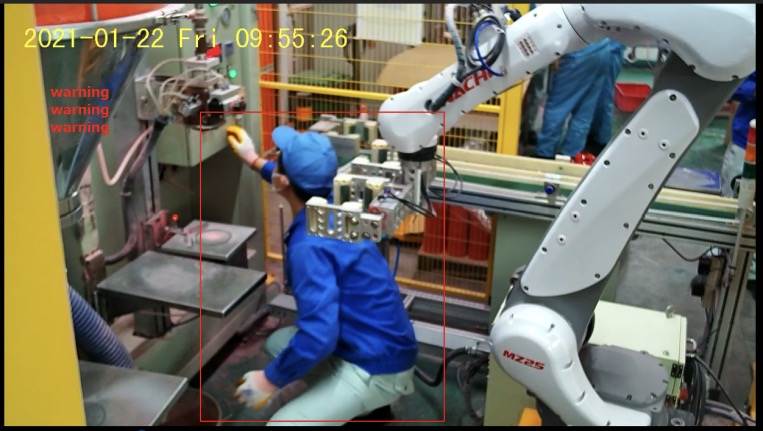 It is understood that due to the particularity of the scene, the high-power computing components cannot be used. The detection equipment has built-in several “industrial AI event cameras” for all-round detection, and the core components are independently developed and produced by Simmir Vision. It is greatly reduced, which is more conducive to large-scale promotion and implementation in the market.

Compared with the first two, which are mainly aimed at personnel detection, the third anomaly detection module is mainly aimed at equipment security. Based on video understanding technology at the edge, the “Industrial AI Event Camera” uses binary scene classification to detect and intervene in real-time online unexpected events in production line equipment, greatly improving troubleshooting efficiency and reducing abnormal risk states. The anomaly detection module is expected to be in mass production in 2023. 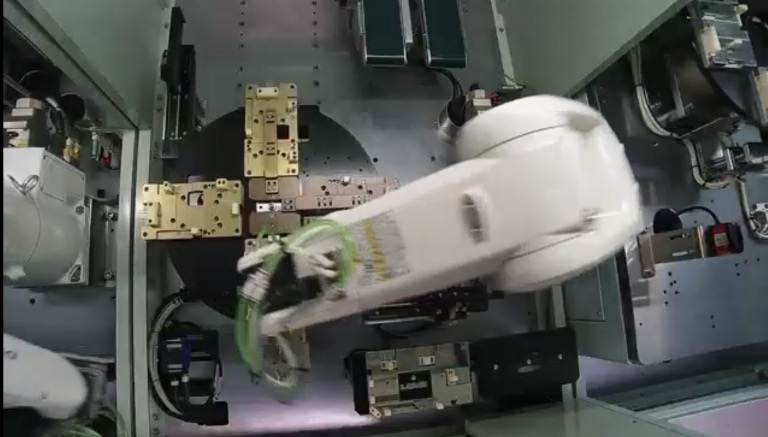 “Our idea is to make it clear for every scene, and gradually cover all domestic manufacturers of industrial robotic arms and collaborative robotic arms.” Yang Minglun explained that the company will also develop storage devices and data software in the future, and the relationship between “camera and storage” will be Like “faucets and buckets”, data barriers can be formed.

From an industry perspective, Yang Minglun believes that Simil Vision has obvious competitive advantages in the market. First, the core components of the product are independently developed and produced, which can greatly reduce the cost of the supply chain; second, the company has industrial robots and automated factories in many industries around the world. The video data set of the scene; the third is the company’s self-developed core operator, from the model to the operator, from the chip architecture to the acceleration method, to build a whole chain of barriers.

Behind the realization of a series of advantages of Simmir Vision is closely related to the core team of the company. From the chip to the final solution, the company has built a complete technology and implementation team, of which 80% of the R&D team has masters and doctorates, all of whom are from Shanghai Jiaotong University, and have decades of accumulation in the field of edge video understanding. The research results were published in Top international journals and conferences such as NMI, AAAI, TECS, TIST, etc.

In terms of implementation, Simmir Vision’s “Industrial AI Event Camera” has achieved medium-to-high volume production, and safety inspection products and system solutions have been implemented in many key industrial fields such as lithium batteries, home appliances, high-speed rail manufacturing, automobiles and parts, and biomedicine. , customers include dozens of domestic leading customers such as Ningde, Midea, CRRC, Keda, Toyota, FAW, Sinopharm, as well as many overseas leading companies such as Britain, France, the United States, Israel, etc., all have large-scale deployments, and their performance growth has exceeded 10 times.

Yang Minglun said that Simil Vision aims to cut into the leading major customer channel within one year, deeply cultivate the robotic arm industry, and then launch testing instruments in the biopharmaceutical industry, quickly landing in the top 300 domestic pharmaceutical companies.

It is worth mentioning that Simmir Vision has launched a new round of financing, with a target scale of tens of millions of RMB, which will be mainly used for the construction of production lines, R&D equipment, expansion of production scale, and formation of an expanded sales team.

Zhao Yang of Atomic Venture Capital said: “The application scenario of Simmir’s vision aiming is different from other domestic machine vision projects. It is not for product defect detection on the production line, but for personnel safety and equipment detection during the operation of the production line equipment. At present, the domestic market is scarce. On the one hand, the realization of innovative applications is closely related to the development of large-scale environmental technologies. Video understanding technology is embedded in industrial edge scenarios, making low-latency decision-making and machine equipment control, relying on AI chips and edge The development of the two fields of computing; on the other hand, Simmir Vision is specially developed for industrial event detection scenarios. Its integrated software and hardware solutions have the advantages of high cost performance and low latency, which can greatly meet the needs of end customers. Security incident detection solutions are also required by the current industry. Today, Simmir Vision has built its own moat in terms of underlying data accumulation, algorithms, architecture, and product cost-effectiveness, and has a first-mover advantage. Large scale advantages and barriers.”

This article is reprinted from: https://readhub.cn/topic/8iaGtsmOVEm
This site is for inclusion only, and the copyright belongs to the original author.