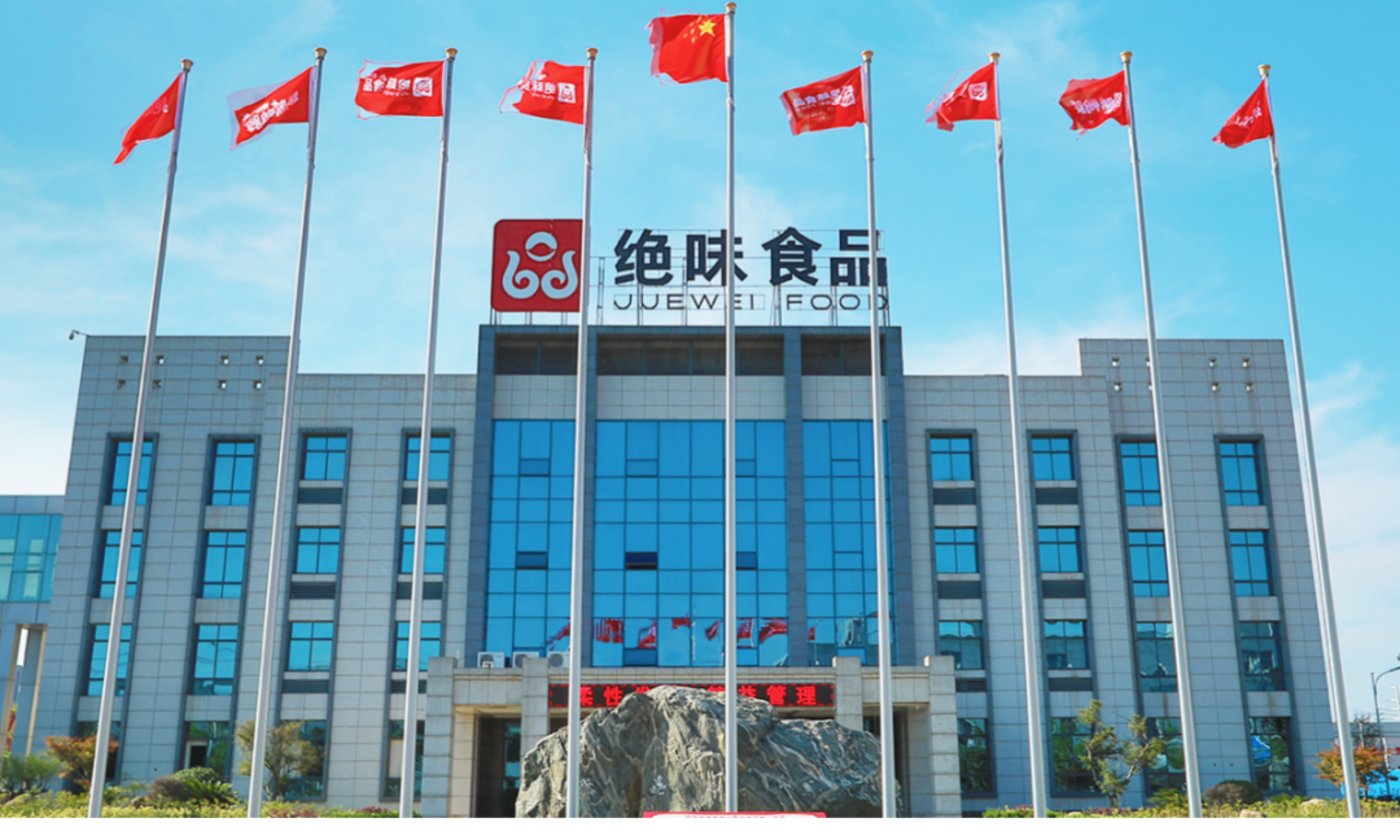 Note from Titanium Media: This article is from the WeChat public account Lieyun.com (ID: ilieyun), author 丨 Lin Jing, and published by Titanium Media with permission.

Recently, Juewei Foods released the 2022 semi-annual performance forecast. It is expected to achieve an operating income of 3.2 billion to 3.4 billion yuan in 2022, an increase of 1.78% to 8.14% compared with 3.144 billion yuan in the same period last year.

However, net profit fell sharply. Juewei estimates that the net profit attributable to shareholders of listed companies in the first half of the year is 90 million yuan to 110 million yuan, down 78.08%-82.07% from the same period last year.

Juewei Food is not an isolated case. The other two protagonists of the “Traditional Luwei Big Three”, Zhou Hei Ya and Huang Shanghuang , did not perform well either. On the other side of the industry, the lo-mei track is still hot, capital is constantly pouring in, emerging brands are flourishing, Ziyan Baiwei Chicken and Dezhou Braised Chicken are sprinting for IPO, and the 100 billion lo-mei market has started a new round of great changes.

Behind 10,000 stores, has Juewei reached the ceiling?

Since its listing five years ago, Juewei has expanded significantly through the franchise model. As of the end of 2021, Juewei has 13,714 stores, while Zhou Hei Ya and Huangshanghuang have 2,781 and 4,281 stores respectively.

On the one hand, the scale of 10,000 stores brings considerable revenue. In 2021, the operating income of Juewei Foods will be 6.549 billion yuan, and the net profit attributable to shareholders of the parent company will be 981 million yuan.

But there are also concerns. As the density of stores increases, there will be diversions between stores, affecting the efficiency of a single store, and generating interest entanglements among franchisees. Compared with Michelle Ice City, which has 20,000 stores in the new tea industry, franchisees complained bitterly about a series of problems such as regional protection, difficult location selection and high material costs.

Tianfeng Securities Research Report predicts that there will be about 25,234 Juewei Food stores nationwide in the future, with a total of 38,000+ stores. 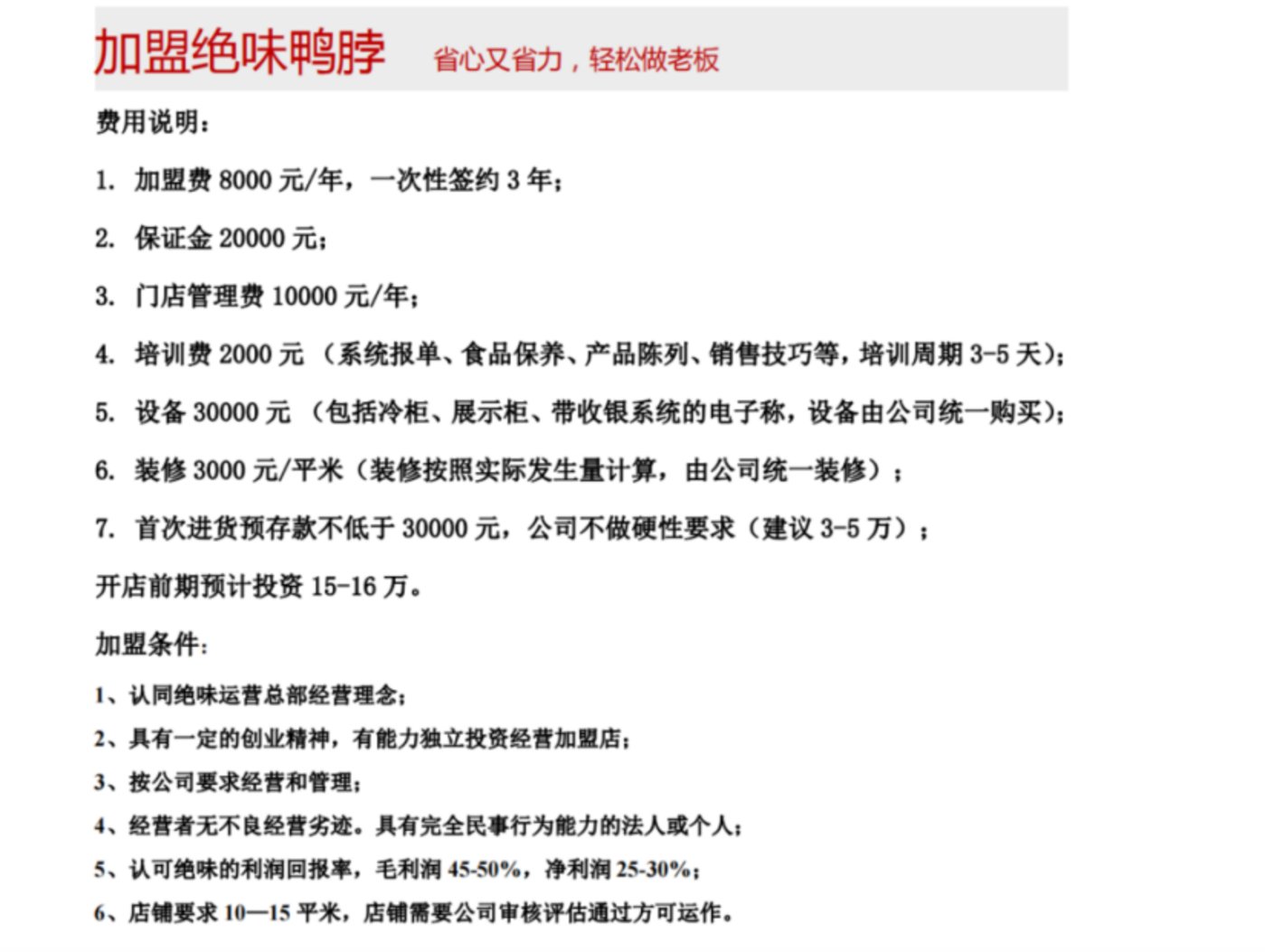 A piece of Juewei Duck Neck franchise information obtained by Lieyun.com shows that the franchise fee is 8,000 yuan per year, and a one-time contract is required for 3 years. In addition to the deposit, store management fees, training fees and other expenses, the estimated investment in the early stage of opening the store is 150,000-160,000.

When dialing the telephone consultation of Juewei franchise, the other party introduced several changes of Juewei franchise. One is the continuous rise of the franchise fee. Only the franchise fee has risen from 6,000 yuan last year to 8,000 yuan this year. In terms of location selection, some areas are already saturated with stores, and in other areas, the existing stores should be avoided by 1.5 kilometers.

Second, before 2010, Juewei had delegated the authority of regional agents in the early stage of development, so regional agents in some urban areas could open multiple chain stores to monopolize the market. With the development and maturity of Juewei, this mode no longer exists, only the ordinary franchise mode in the above screenshot.

The third is that the current support for franchisees has been reduced. The above-mentioned person in charge of investment promotion and franchise introduced that because the company has launched an upgrade project, the focus of the group has been sent to Hefei, Anhui to support new projects. 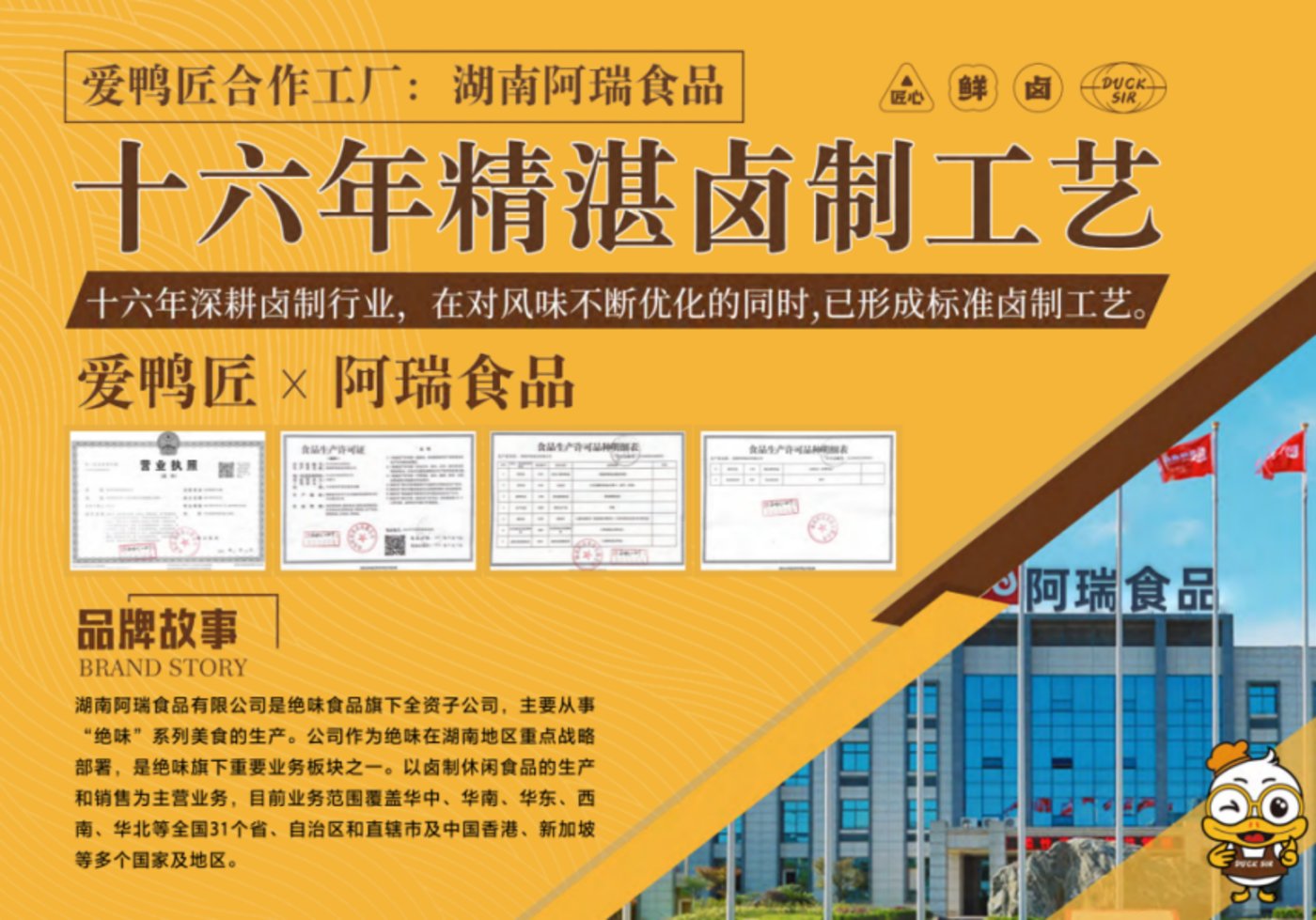 The person in charge of investment promotion of Juewei Food belongs to Hunan Arui Food Co., Ltd. According to Tianyancha, the company is wholly-owned by Juewei. The person in charge said that this year, the new brand of Love Duck Craftsman is being promoted. As early as 2018, it began to develop internally. The target audience is the younger generation of consumer groups, and some innovations have been made in retaining the classic taste of Juewei. In July this year, Duck Craftsman also began to open up franchises across the country. The entire franchise policy was consistent with the initial stage of Juewei, and the authority of regional agents was delegated.

In fact, in addition to the love duck craftsman, Juewei Food has also been actively exploring the second growth curve through investment in recent years.

At the 2021 performance meeting, Dai Wenjun, chairman of Juewei Foods , once said that Juewei Foods will increase the integration of small and medium-sized brands in the region with capital means to further increase its market share.

As for the reason for the pre-decrease in performance, Juewei’s official statement is that some factories and stores suspend production and operations during the reporting period, which will have a certain impact on the company’s sales and profits. In addition, the profit decreased year-on-year due to the increase in raw material costs, the increase in sales expenses and the subsidies given to franchisees.

According to public information, Juewei has not disclosed the specific subsidy policy for franchisees to the outside world. In the 2021 Juewei Food Performance Exchange Conference, when answering the support for franchisees, founder Dai Wenjun introduced two points. In addition to the inspection, verification and counseling, the company has also formulated a franchisee hierarchical management and incentive policies.

Second, the company evaluates according to the regular inspection scores of the stores, combined with the sales performance of the franchisees, and implements different levels of reward policies according to the evaluation results to encourage the franchisees to standardize their operations and become bigger and stronger, so as to maintain and improve the market of the company’s products. share.

As for how much money these franchisee incentive policies cost, Dai Wenjun did not disclose.

According to the exchange minutes of the Juewei Food Conference on the Internet, Juewei made an unprecedented one-time subsidy to franchisees in Q4 2021, and the subsidy was many times that of 2020. The person in charge said that the subsidy amount is tens of millions, but it is not convenient to disclose. The specific form is mainly cost-based subsidies. “In the early stage of the epidemic, our subsidies were completely distributed in the form of value of goods. For example, the value of goods of 10 million yuan to franchisees may have to be released in batches for 2-4 months. This time, in order to improve the franchisee Business confidence, we have paid all the subsidies at one time, and bound the franchisees and we have been going on.”

The performance is under pressure, and the dilemma of “Brother Luwei”

Combing through the financial report of Juewei Foods , it can be found that the net profit of Juewei decreased for the first time in 2020, achieving a net profit of 701 million yuan attributable to the parent, a year-on-year decrease of 12.46%.

It is undeniable that Juewei still has an absolute advantage in terms of market share and revenue on the 100 billion luwei track.

The “China Catering Category and Brand Development Report 2021” also shows that the market share of the top five brands on the Luwei track in 2020 is only about 20%. Among them, Juewei Food ranked first with an 8.6% market share advantage.

In comparison, Juewei Food ‘s revenue in 2021 will be 6.549 billion yuan. However, it is also an indisputable fact that the performance of “Brother Luwei” is under pressure.

At present, there are still several major problems in front of Juewei Food .

Third, the proportion of online channels is relatively low. The 2021 financial report shows that Juewei Food ’s online sales channel revenue accounted for only 2.01%, while Zhou Heiya and Huangshanghuang’s online sales accounted for 32% and 32% respectively through the layout of takeaway and community fresh food e-commerce. 21.4%.

Dai Wenjun, founder of Juewei Foods , admitted at the 2021 annual performance meeting that the reduction in offline consumption demand caused by the epidemic, especially the sharp drop in the number of passengers in transportation hubs, shopping malls and tourist destinations, has led to the original high-potential consumption areas. consumption power has fallen off a cliff.

In addition, when the epidemic swept the catering industry, it also caused certain fluctuations in Juewei’s investment income. In 2020, Juewei Food ‘s “long-term equity investment” lost a total of about 116 million yuan.

The track is still hot, and the “back wave” of lo-mei is fierce

Relevant data from CBNData’s “2021 Braised Product Industry Consumption Trend Report” shows that in 2020, the scale of China’s leisure braised food industry is about 120 billion yuan, and it is expected to continue to increase at an annual growth rate of 13%. By 2025, the market size is expected to exceed 220 billion yuan.

The Luwei track is still hot, and intensive financing is generated in various sub-scenarios.

According to incomplete statistics from Tianyancha, in 2021, there will be 25 financing events in 21 halogen products companies. A number of emerging brands have entered the market. Wang Xiaoluo, who occupies the minds of consumers with tiger-skin chicken feet, mainly focuses on Mazuzuo, which is a single product of chicken feet, and Shengxiangting, Ludama, Yanlutang, etc., which focus on new hot halogen brands. The gluttonous brands that have entered the prefabricated vegetable market, and the prefabricated vegetable players in the Luwei track have chrysanthemums.

Lieyun.com learned from the relevant person in charge of the Wang Xiaoluo brand that starting from the second half of 2020, Wang Xiaoluo has vigorously expanded its offline sales channels. At present, it has covered more than 300 cities across the country and more than 80,000 supermarkets, including convenience stores, Hypermarkets, collection stores, new retail and other formats have established cooperation with well-known brands such as Wumart, Carrefour, Aeon, Jingkelong, Duodian, Yonghui Supermarket, 711, and Hema. At present, Wang Xiaoluo’s offline channel sales account for nearly 70% of the total revenue.

Wang Xiaoluo is a typical new consumption style. He is particularly good at implanting in popular film and television dramas in marketing. For example, the recent hits such as “Meng Hualu”, “Happiness to Ten Thousand Homes” and “Agarwood is like crumbs” are chasing after him. Highly penetrated in the drama group.

Cui Lili, executive director of the Institute of Electronic Commerce of Shanghai University of Finance and Economics, believes that from its own business model, Juewei takes duck neck as its main product, adopts a franchise model, and has a central kitchen in one area and a set of cold chain configurations, and then is matched with a large number of Retail franchise stores. Under the epidemic, the uncertainty will be greater.

She believes that lo-mei does not meet the characteristics of healthy products, and the consumer groups and scenarios are also limited, which makes the total size of the lo-mei market relatively fixed, so new entrants will definitely form a substitute with the original dominant brands and form a competitive relationship. “Traditional lo-mei still focuses on the dining table scene, while new entrants pay more attention to the entry of re-emerging consumer groups and consumption scenes. From this perspective, they will try to establish a brand first and then expand the scale.”

This article is reprinted from: https://readhub.cn/topic/8i9a8TAQ7yr
This site is for inclusion only, and the copyright belongs to the original author.