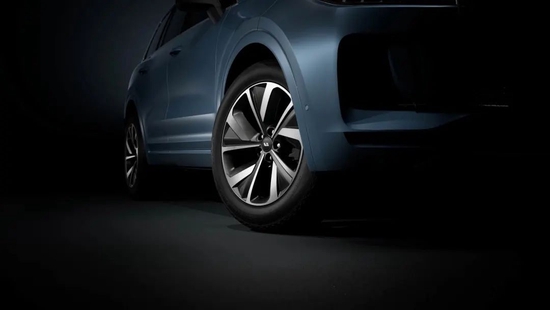 The new car is not out, the old car is old

The ideal handed over the most unsatisfactory financial report. The year-on-year growth in Q2 deliveries stalled significantly, and gross profit margin and revenue also declined further. In the last quarter, it was only one step away from making a profit. In the second quarter, the net loss expanded by 172.2% year-on-year.

The main reason for the huge loss is the high marketing expenses. Among them, R&D investment has increased by over 134% year-on-year, which is an ideal for the new car L9 and future pure electric models. It may continue to increase R&D investment in the future.

Judging from the Q3 delivery guidelines given by Ideal for 27,000 to 29,000 vehicles, the story of Lili ONE and Lili L9 dual-engine delivery is still incomplete. The new car L9 is about to be delivered, and the L8 is released earlier than expected, which is eroding the market space of the old model Ideal ONE.

The new car has not yet come out, and the old car is old. Li Xiang, a self-proclaimed product manager, handed over the most unsatisfactory financial report in the history of ideals.

However, among the new forces, the ideal that is closest to making a profit, in the case of the ideal ONE price increase of more than 10,000 yuan in early April, the Q2 net loss increased by 172.2% year-on-year to 641 million yuan, far exceeding the market’s expected loss of 510 million yuan, a record A ten-quarter high. In contrast, Ideal lost 236 million yuan in the same period last year and lost 10.9 million yuan in the first quarter of this year.

Starting from the end of August, the Li Li L9 was officially delivered, and Li Li ended the situation where one car would dominate the world. However, the expected dual growth engine has not been realized, and instead it has fallen into a battle between the left and right. The management explained in the earnings conference call that this is because the users who wanted to be the ideal ONE turned into L9 users after arriving at the store, and the delivery guidance for the next quarter has taken into account the decline in the order volume of the ideal ONE.

The delivery volume was lower than expected, and he fell into the dilemma of selling more and more losses. Li Xiang gradually drifted away from the ideal of selling 1.6 million vehicles per year.

In the environment of “challenges and uncertainty”, the ideal of ranking among the top three new forces in car manufacturing encountered Waterloo.

In the second quarter of this year, Ideal delivered 28,687 new cars, a decrease of 9.6% from the previous quarter and a year-on-year increase of 63.2%. Compared with the three-digit year-on-year growth rate in previous quarters, the ideal stall is obvious. The earnings report said the decrease in vehicle deliveries was due to a supply shortage caused by the epidemic.

Affected by the epidemic in Shanghai in April, new energy car companies generally suffered setbacks in delivery, and Ideal was the most affected among the new car manufacturers. In April, Lili only delivered 4,167 new cars, down 62% month-on-month, while NIO and Xpeng dropped 49% and 42% month-on-month, respectively.

Although the ideal supply chain recovered quickly, the delivery volume in May and June both exceeded 10,000, and it won the top sales of new forces in May, but the year-on-year growth rate this quarter still hit a new low in nearly five quarters. In July, the ideal delivery volume continued to decline by 20% month-on-month. This decline cannot be entirely blamed on the weather. 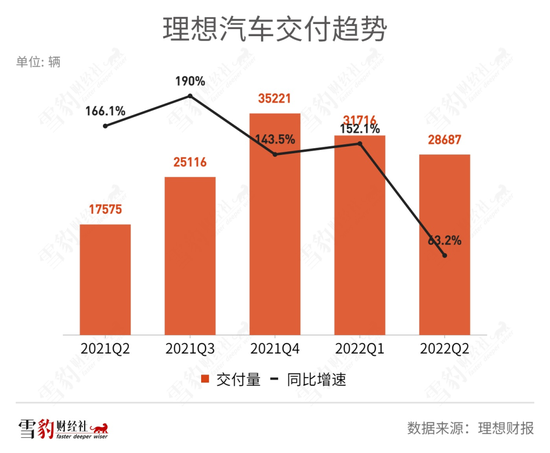 In the second quarter, Ideal’s revenue increased by 73% year-on-year to 8.73 billion yuan, dwarfed by the high triple-digit growth rate in previous quarters. This achievement was created when the ideal ONE raised the price by 11,800 yuan in April. 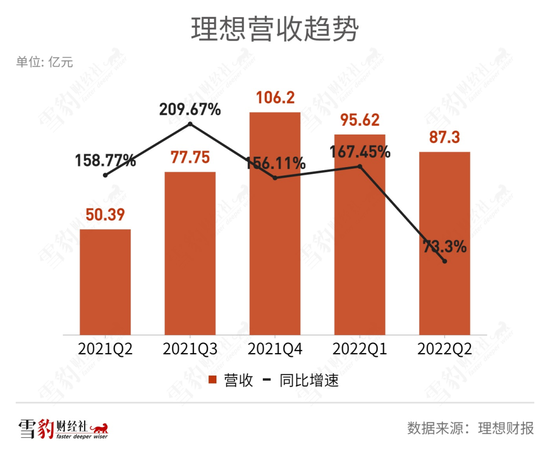 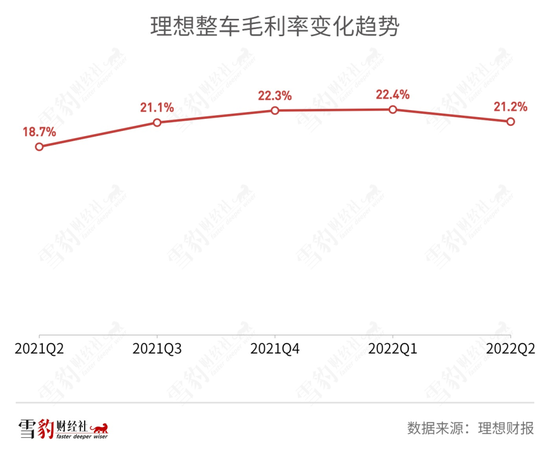 The B side of the decline in delivery volume, revenue, and gross profit margin is a substantial increase in losses.

In the second quarter, Ideal’s net loss expanded by 172.2% year-on-year to 641 million yuan, far exceeding the market’s expectation of a net loss of 510 million yuan. Among the new forces, the ideal that is closest to profit has entered the dilemma of increasing income without increasing profits.

Why did the top student ideal, who has always been good at cost control, fall deeper into the quagmire of losses?

To give a brief answer first: The increase in operating expenses further erodes desirable profits.

According to the financial report, Ideal’s operating expenses in the second quarter were 2.86 billion yuan, a year-on-year increase of 91.9%, of which R&D investment increased by 134.4% year-on-year to 1.53 billion yuan. In contrast, revenue growth was only 73.3% year-on-year.

In the past, Ideal’s excellent performance in cost control was largely due to the low R&D investment caused by its single model. In “Weixiaoli”, the ideal R&D investment accounts for the lowest proportion of revenue. However, after confirming the launch of Li Li L9 and future pure electric models, Li Li began to rapidly and significantly increase R&D investment. In recent quarters, the growth rate of ideal R&D investment has exceeded triple digits. 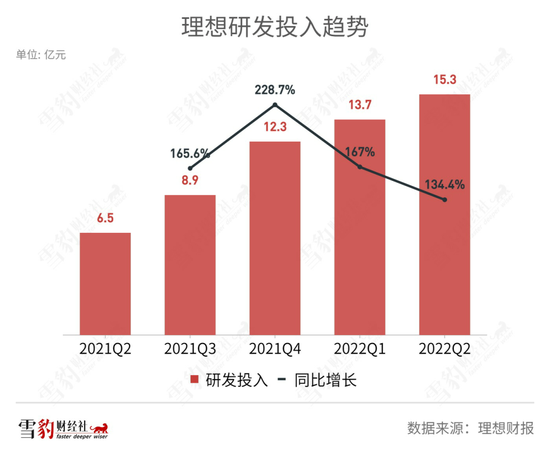 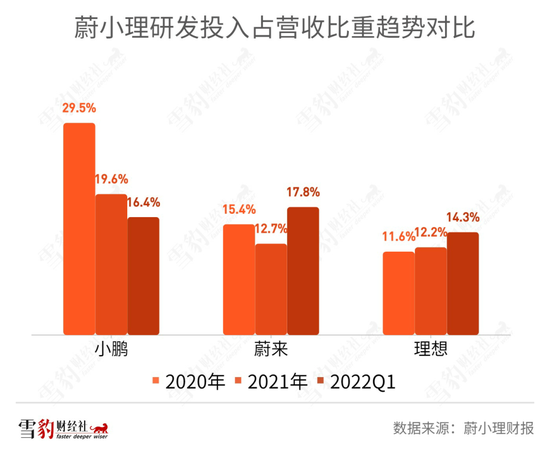 In terms of marketing expenses, Ideal’s selling, general and administrative expenses in the second quarter were 1.33 billion yuan, a year-on-year increase of 58.6%. The earnings report said this was due to an increase in employees and the expansion of the company’s sales network.

Ideal’s previous goal was to reach 400 stores by 2022, far exceeding the 220 at the end of last year. However, as of the end of the first quarter, the number of ideal retail stores was 217, not increasing but decreasing. In the second quarter, the number of stores increased to 247, which was significantly under pressure in the second half of the year.

Selling, general and administrative expenses as a percentage of revenue climbed as Ideal revenue continued to decline since the fourth quarter of last year. With the expected revenue growth of 15.3% to 22.9% in the next quarter, if the target of store laying is to be completed, the ideal profit margin will be further eroded. 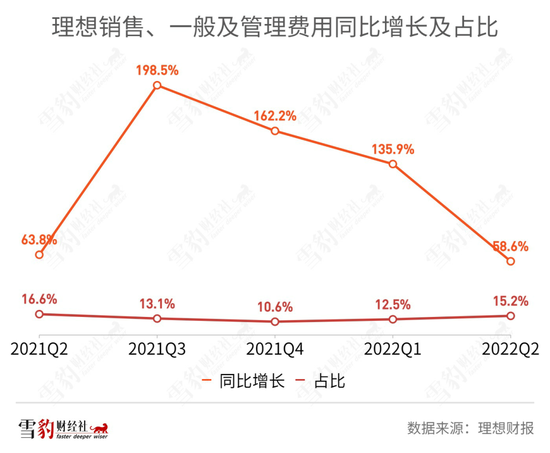 It is not difficult to see that from R&D to marketing expenses, L9, which has high expectations, has obvious resource tilt. Against the backdrop of a continuous decline in deliveries, Ideal is betting on this new model.

Twin engines fight each other

However, the twin engines planned by Li Xiang seem to have insufficient power and have not been able to pull the ideal forward quickly.

Judging from the extremely conservative Q3 delivery expectations given by this ideal, the story of the “dual-model growth engine” has not yet been told.

According to the financial report, Q3 deliveries are expected to be 27,000 to 29,000 units, a year-on-year increase of 7.5% to 15.5%, which is lower than the market’s expectation of 39,000 units. The reduction in deliveries directly led to Ideal’s expectation for Q3 revenue growth to drop to around 20%. In the past, the delivery growth rate forecast given by Ideal was rarely lower than triple digits – even in Q2, which was severely affected by the epidemic, its delivery volume still increased by more than 60% year-on-year.

The launch of the new car L9 has indeed led to a surge in orders. According to the announcement released by Ideal on August 1, the accumulated bookings of Ideal L9 have exceeded 50,000, of which the number of confirmed orders exceeds 30,000. Li Xiang disclosed at the earnings conference call that the delivery volume of Ideal L9 in September will exceed 10,000.

With such a huge L9 order in hand, Ideal still gives the lowest delivery growth forecast in history. There is only one reason. Ideal ONE cannot be sold, that is, the launch of Li Li L9 has swallowed up part of Li Li’s market share.

If the delivery in July and the over 10,000 deliveries of L9 in September are deducted, the ideal ONE will only deliver 7,000 to 9,000 units in August and September. The management also gave an explanation on the earnings call. This is because after the launch of L9, some of the potential customers of Ideal ONE have been converted to L9, which has affected the number of ideal ONE orders.

Li Xiang said that he still has full confidence in the product strength of Ideal ONE. However, in order to boost the sales of Ideal ONE, Ideal, which has never cut its price, launched a 7,000-yuan discount on this model from August 14.

A prospective owner of the Ideal L9 Xiaoding told Snow Leopard Finance that his original intention to go to the Ideal Store was to see the Ideal ONE, but because of the launch of the L9, he finally chose the L9. According to his observations in the group of prospective car enthusiasts, such situations are not uncommon, and the opinions given by prospective car owners are roughly the same, “The remodeled L8 of the Ideal ONE is expected to be delivered at least by the end of the year. Buy L9.” Of course, there are also many car owners who are waiting to see the upgrade of the ideal ONE to replace the L8.

Li Xiang revealed at the earnings conference call, “L8 may be released earlier than everyone expected, and the time rhythm from release to delivery will be faster than L9 and then.” At that time, the emergence of L8 may intensify Devouring the ideal ONE order.

The low expectation of ideal Q3 deliveries is not due to a lack of capacity. The ideal Changzhou plant will have an annual production capacity of 200,000 units after the smooth expansion within this year. Li Xiang also said in an interview with the media in June that the Changzhou factory can meet the demand for capacity ramping in the future. The ideal company also revealed that the production capacity limit of the ideal L9 is 15,000 units per month, and these figures are higher than the delivery guidance for the Q3 quarter.

The ideal 2022 delivery target is 200,000 units. The lack of success in Q3 made it more difficult to complete the annual goal. Ideal cut its annual target by 15% to 170,000 vehicles in May, according to a late report. Taking into account the guidance of Q3, Ideal is expected to sell up to nearly 90,000 units in the first three quarters, and only more than half of the target has been completed.

Ideal has always been known for its excellent product positioning, and Li Xiang himself has also been called the best product manager of Ideal by the outside world. However, the old and new competition between L9 and ONE makes people doubt that the two cars, which are also positioned as 6-seat SUVs for families, are somewhat similar.

The enemy of the Ideal ONE is not only its own L9. NIO launched the ES7, a medium and large SUV model in June this year, and the flagship SUV model G9 of Xiaopeng will be launched in September. The M7, which also focuses on the extended-range SUV, has been launched in July. In the past, the relatively blank market where Ideal ONE was located is now crowded with competitors.

When the new players generally cross the threshold of 100,000 annual sales, how to stand firm in their own market and take a step forward is the key to future growth.

For Ideal, the top priority is to face its own new car and many powerful enemies, how to maintain market segment share, this is the second test question given to Ideal by the market. Judging from the current quarterly answer sheet alone, it is hard to say that the results of the ideal handed over are ideal.

This article is reproduced from: http://finance.sina.com.cn/tech/csj/2022-08-16/doc-imizmscv6446874.shtml
This site is for inclusion only, and the copyright belongs to the original author.