Podcasts are increasingly rich in form and content, some of which are comparable in information value and density to articles and videos. We will collect text and images through clipping and screenshots. However, for podcasts with sound as the medium, have you also had the idea of ​​”it would be nice if you could cut this out separately”?

As a half podcast enthusiast, I have been using Spotify all the time. Whether it is device progress synchronization or UI interaction, the basic functions of podcasting are basically satisfied. The only regret is that when I hear wonderful clips, there is no clipping and favorite clips. Function.

So when I started looking for such an application in the market, my needs were relatively clear. First, it must have the function of clipping clips; secondly, it needs to be able to create public links, whether it is used for sharing with friends or collecting; Being able to cross-platform is also a plus;

After a round of searching on the market, I found three that generally meet the requirements. The following is a reference for readers with similar needs by comparing the three podcast applications of Snipd, Airr and QlipCast .

💡Himalaya also includes a “scratch” function for clipping clips, but due to the proliferation of advertisements and some content restrictions, I personally do not take it into consideration. Friends who don’t mind can try Himalaya, which is better in terms of complete functions, multi-terminal synchronization, and network stability. Select, pay attention to sensitive content.

The overall style of Snipd is similar to that of Spotify, with large line icons and dark blue gradients and green colors;

The interface of Airr is simple and clean, mainly in black and white. The first layer has only two modules: the first one is mainly to watch some clips shared by yourself and others, and the second one contains the podcasts you follow or subscribe to, the programs you have heard and the programs you have created. fragment.

QilpCast has been updated two years ago as the latest software. Although the UI is not comparable to the previous two, it is still not satisfactory. 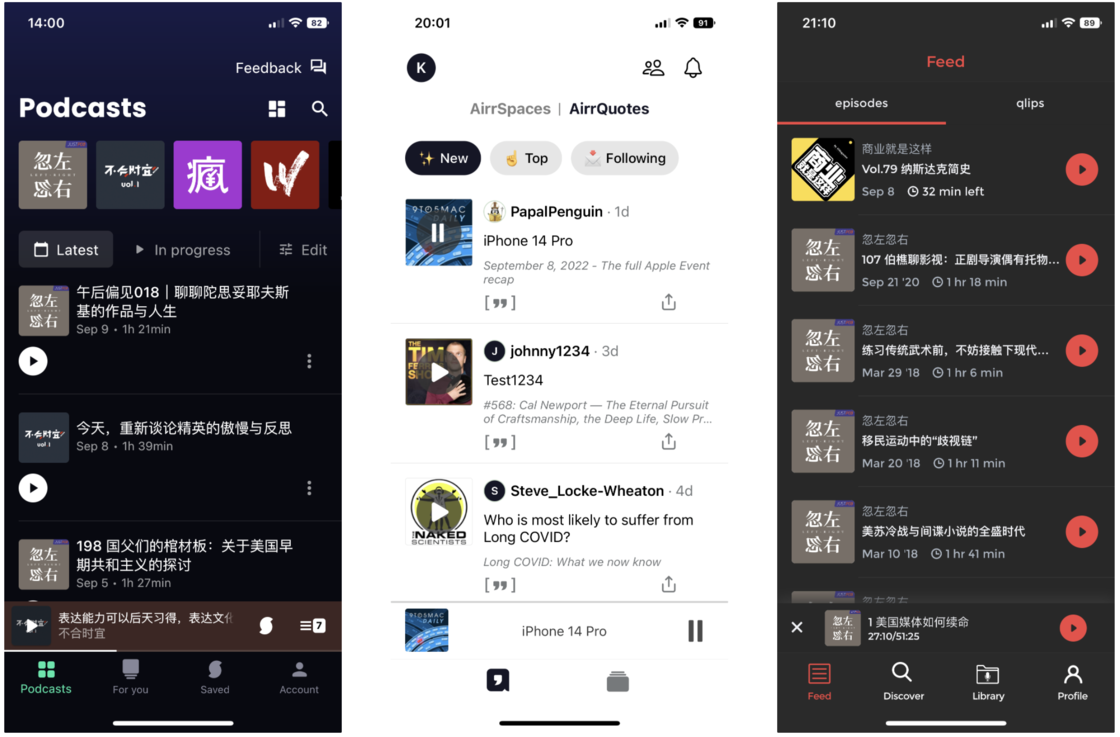 The functions of this part can be said to be the core of my needs, and the function comparison also focuses on the main operation flow, namely: cropping and creating clips → managing and editing clips → sharing/exporting

💡 The names of the clipped clips are called differently in each software, Snip (Snipd), Quote (Airr) and Qlip (QlipCast). For the convenience of reading and comprehension, I will collectively call them snip below.

Airr: The interaction is similar to the cropping action that comes with the IOS photo album. First, adjust the position by sliding left and right on the above timeline, and then pull the cropping frame left and right to adjust the cropping length. The damping unit of one grid is 1 second. But there is a small problem. If the starting point is 0, it is almost difficult to touch the left side accurately. You can only go back to the podcast, first pull the progress bar, and then create a snip

Qilpcast is similar to Airr, but with fewer false touches overall.

Snipd divides the adjustment into upper and lower parts, which is more convenient for long clipping, and supports adding Private Note, which means that more records or notes can be made in addition to the title. 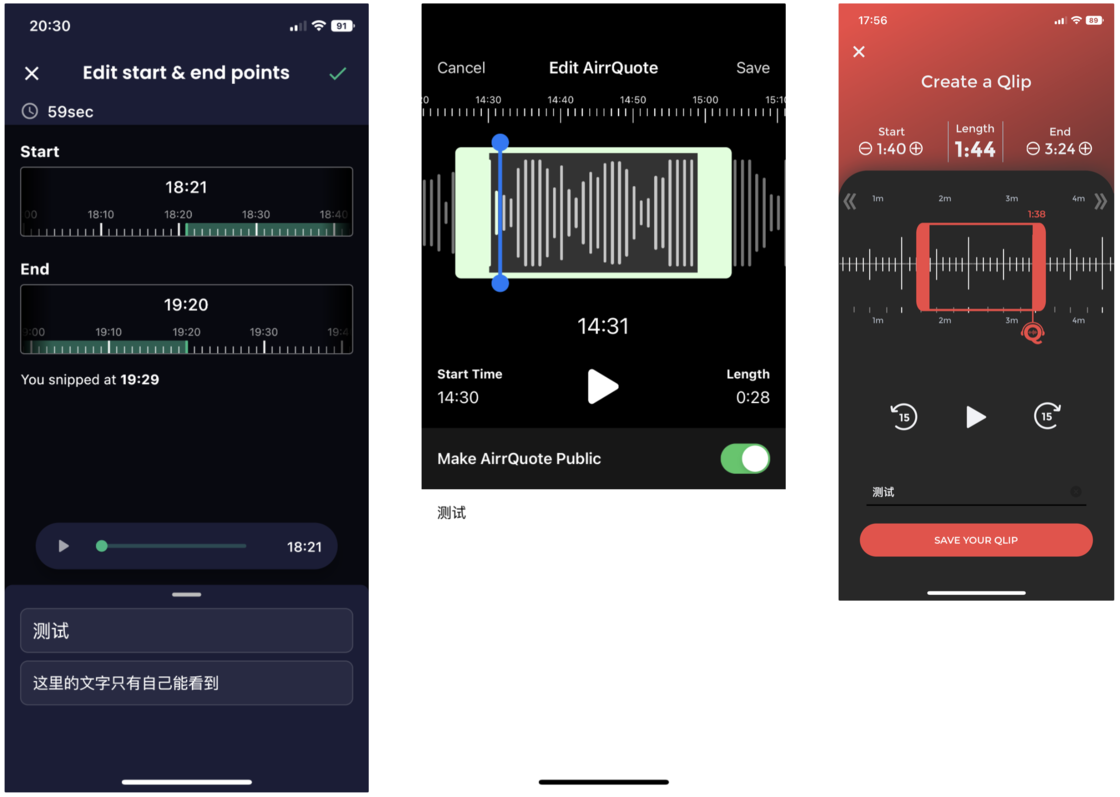 Since snips are created based on a certain program, there are probably the following two forms/scenarios to present snips: manage related snips under the current program, or manage snips in a unified module.

Snipd and Airr have two scenarios, and even Snipd in the unified management module can classify Collections based on custom topics. 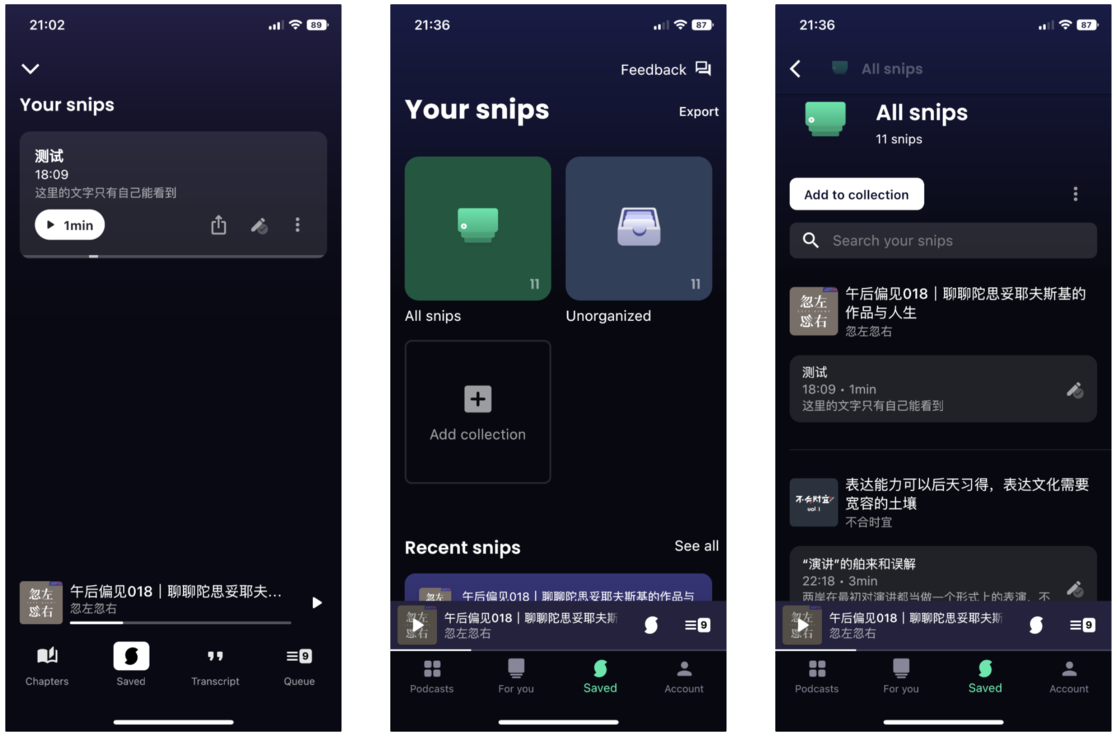 Snipd: segment management of the current program, and unified management module (second from the right) 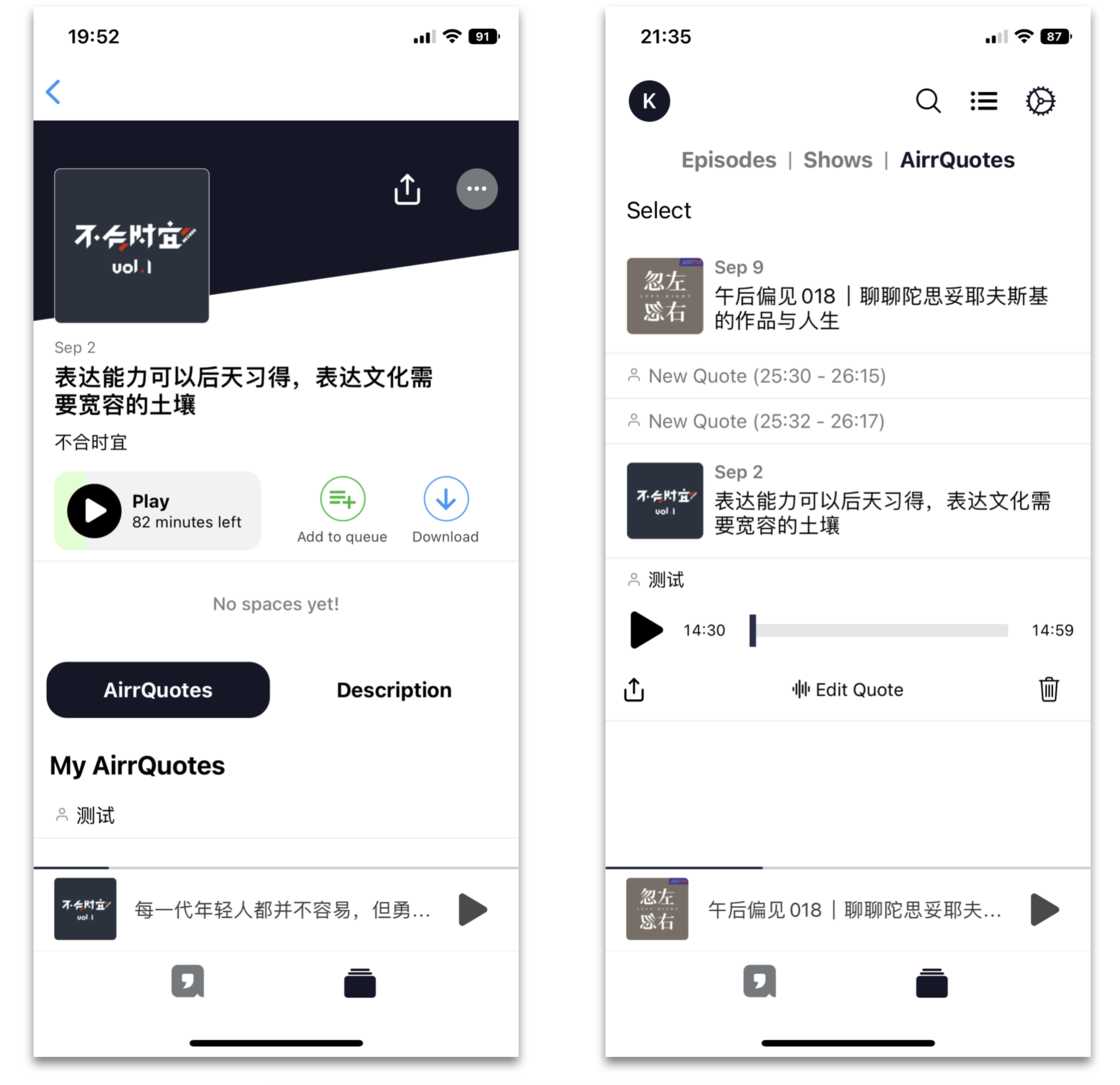 In the management of snips, the performance of QlipCast is average. In the playback interface, it is impossible to know how many snips are created and whether there is any overlap. You need to go to the personal homepage, and here is a snip as a separate unit, and it will not be caused by the same program. close up.

However, in the playback interface of QlipCast, there is a Bookmark function that the other 2 bits do not have, which is barely an advantage. Under normal circumstances, we need to listen to a paragraph before forming the idea of ​​”this wonderful paragraph”; at this time, the Bookmark ends, and then scroll forward to find the starting point to be intercepted, which will improve some convenience in the whole operation. 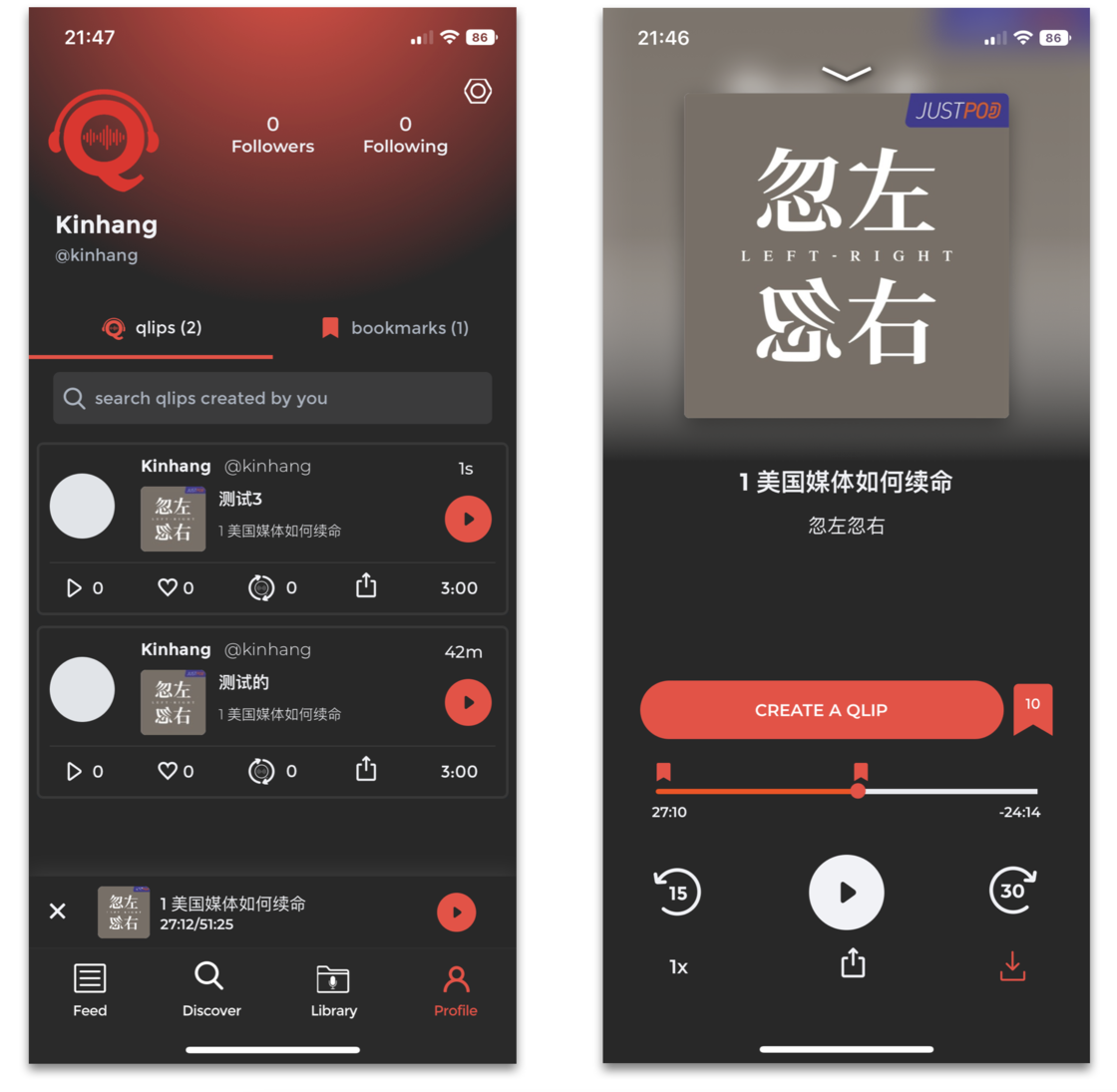 In addition, after the clip is created, Snipd and Airr can edit the title text and length multiple times in the above management module; QlipCast can no longer edit

I will also share interesting clips with friends. At this time, the other party’s experience and network requirements are also important issues (sometimes sharing is for discussion).

After testing, including Airr, which needs to be fully networked on the ontology, the sharing links created by the three applications can be opened on the domestic network . QlipCast can even record the number of times it is played and liked after sharing, and Snipd can choose to generate a video when sharing (in fact, the picture is just a sound spectrum animation) 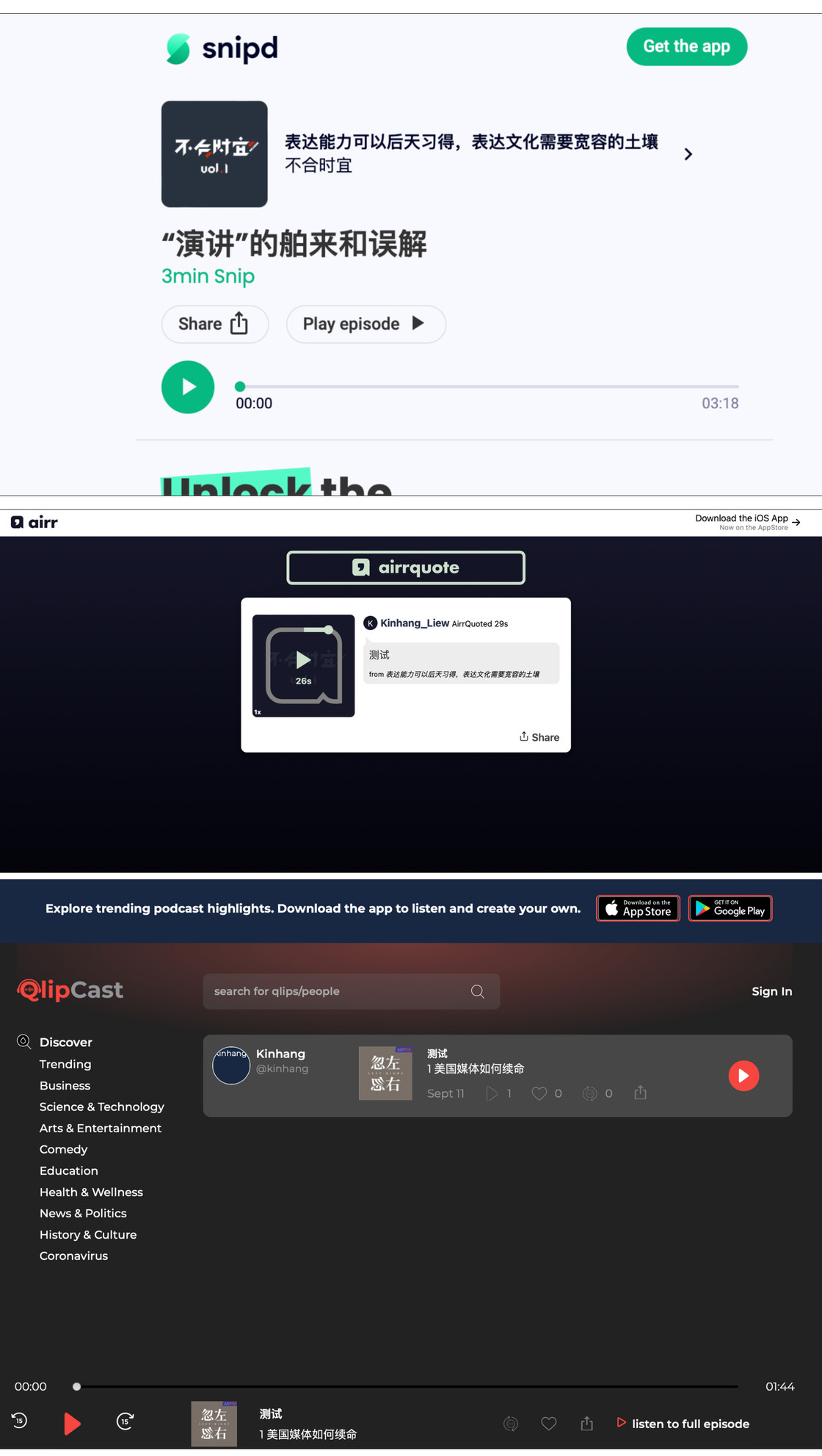 The three applications share the interface of the fragment, and the mobile web page can also be accessed and interacted normally.

On the other hand, since it was mentioned at the beginning that podcasts have also become a source of knowledge, all of this information needs to be aggregated into the same knowledge base/document software. In this regard, Snipd has the most complete functions and can be linked with Readwise and Notion accounts. Instant synchronization, also supports export to Obsidian, Logseq, Bear and Markdown formats. 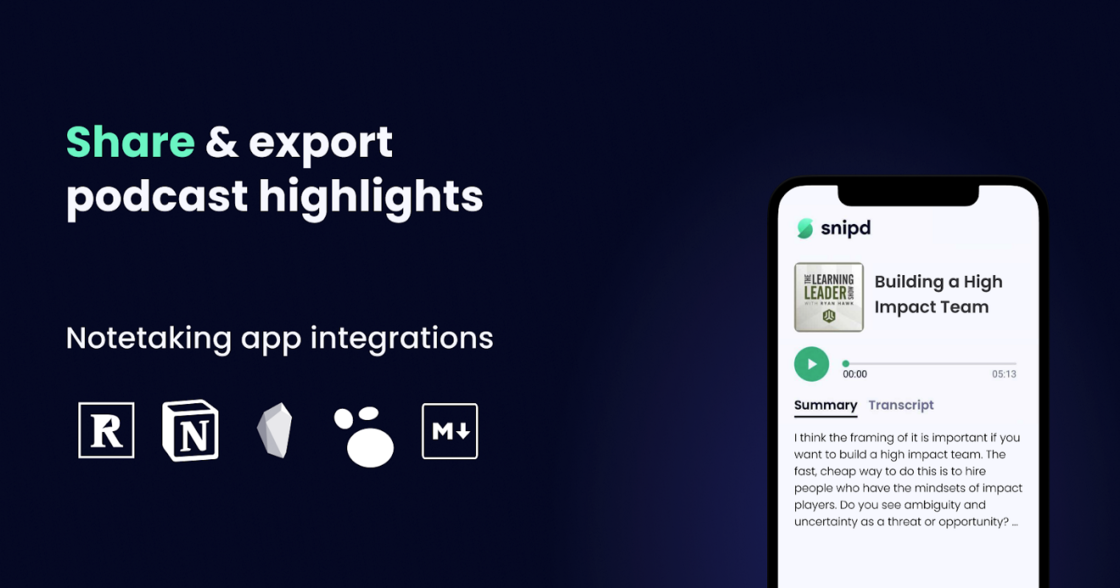 The following is an example of Notion association. After entering the account, you will be asked to select a Notion page or database. Please note that you need to select a page that contains at least one database (it can have other text content) : 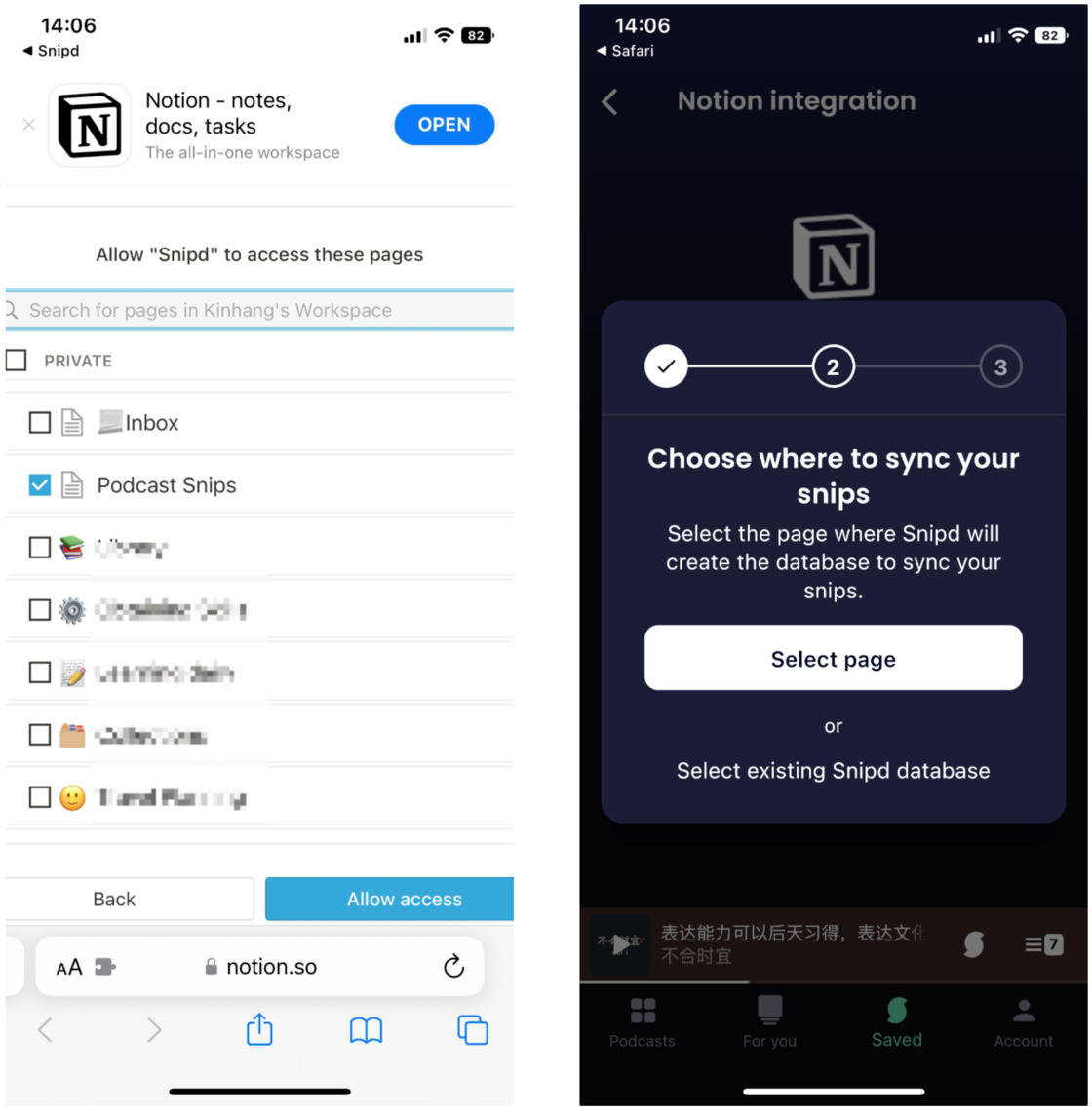 Sometimes it can’t be bound in the app, you can open it with Safari 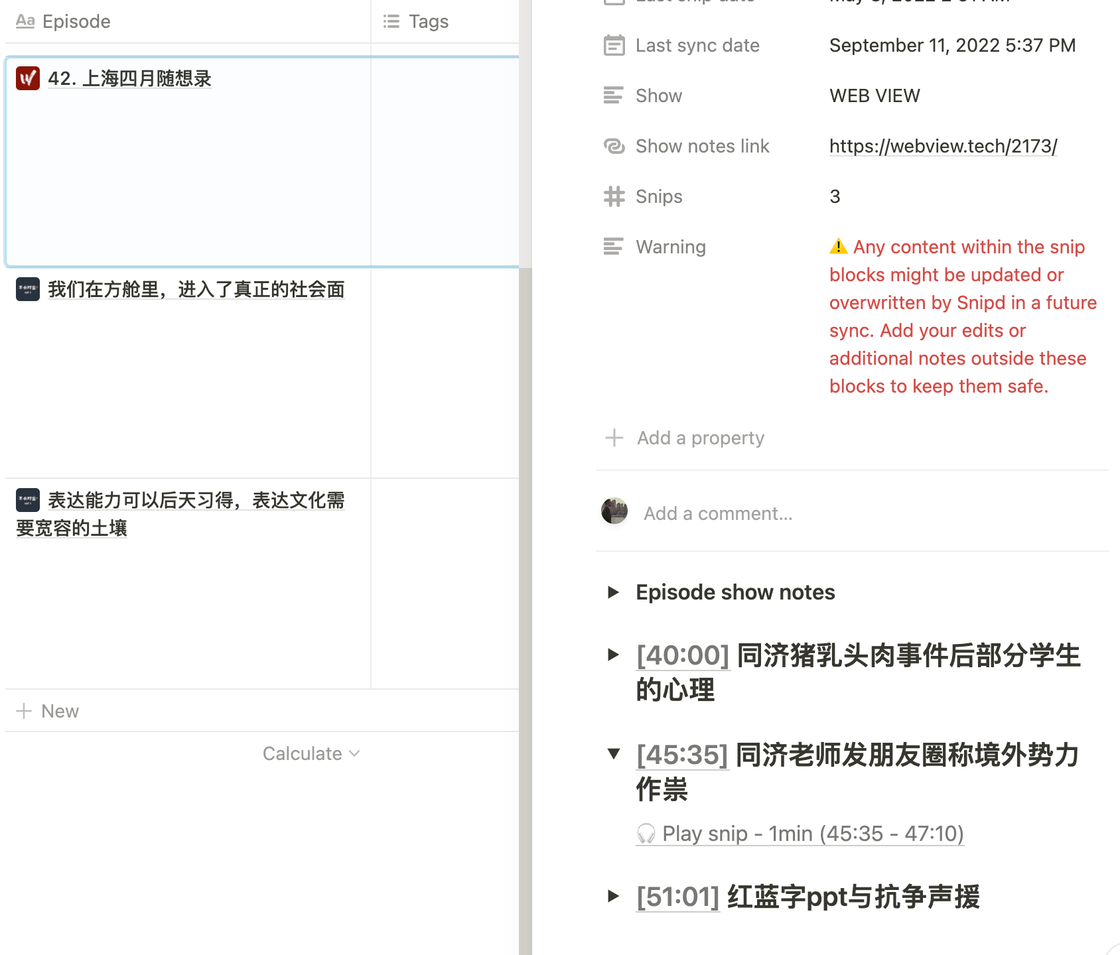 It can be seen that the database summary table is recorded in the program. After clicking, the content of the program will appear in the sub-page, and the synchronization content and completeness are all right.

Airr also has this function, but at present, it only supports Readwise; since I don’t use RW, I won’t show the specific steps here.

When listening to podcasts, if you keep hanging on the scientific ladder, it will increase the power consumption and heat of the mobile phone. Therefore, the stability of domestic network access is also a place I pay attention to.

All the functions of QlipCast are basically unimpeded using the domestic network.

All Airr functions need to be operated in a scientific Internet environment, including loading the audio content itself. Of course, they all provide the function of downloading, which can be downloaded and listened in batches, but cannot create clips;

Snipd is special. On the one hand, it occasionally does not need scientific Internet access (in most cases), and the specific reason is unknown; and when it is needed, it is not fully functional like Airr, mainly because it cannot access account data and podcast program list. , and can’t create a snip, but the podcasts that are already listening can be loaded and switched to the next one and played normally (the high probability is not a cache problem, if I tried to open Snipd in airplane mode, it will prompt that it cannot be played, but it can be played normally when connected to the domestic network ). 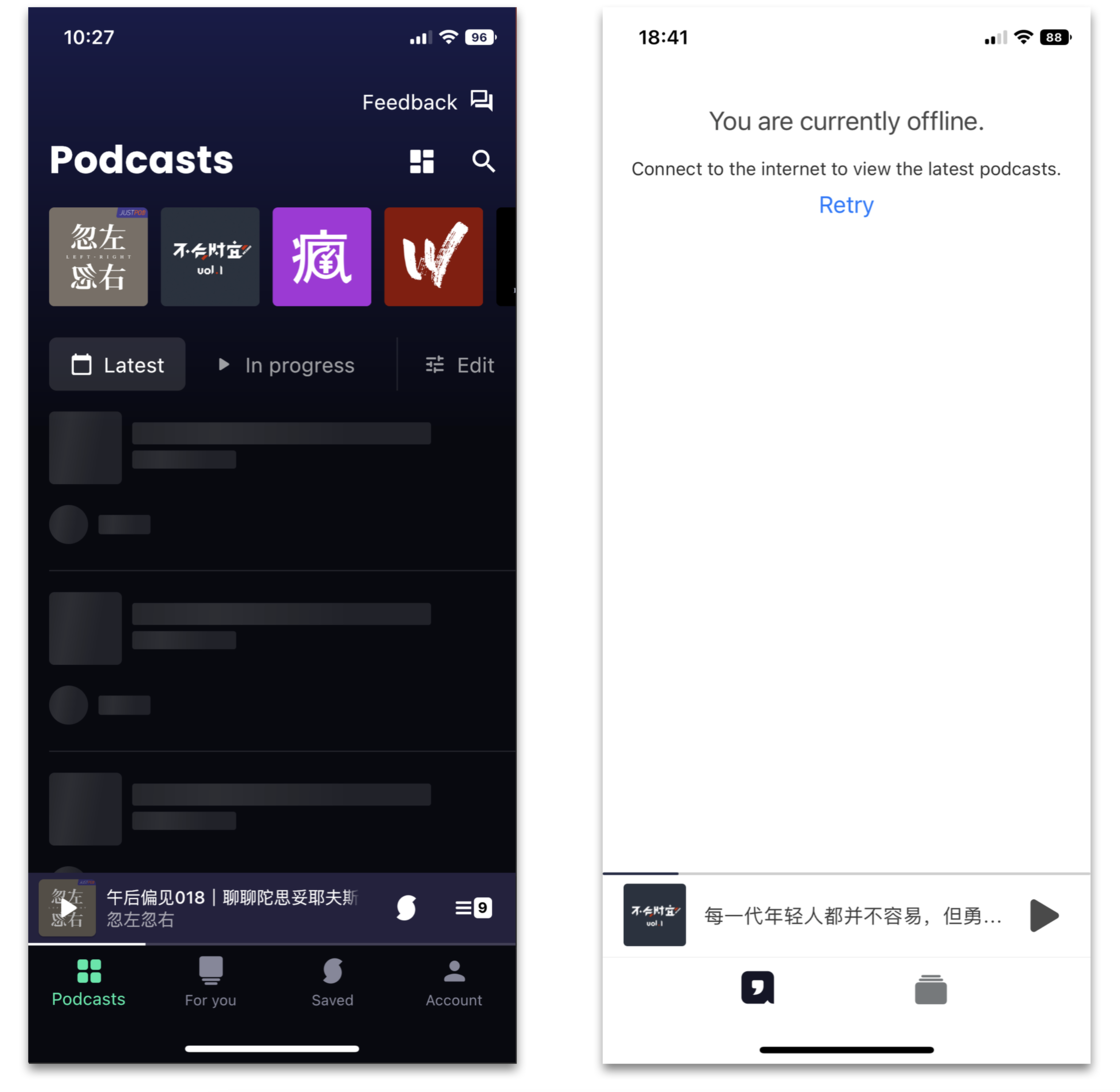 Snipd: Unable to refresh the program list, but you can listen to the program; Airr: The whole process requires scientific Internet access, and sometimes even gets stuck on the opening screen

To sum up, Snipd is the better choice . If you don’t mind the scientific Internet access, Airr is not inferior in other aspects, and I personally prefer Airr’s design (more subjective); although QlipCast has a huge advantage on the Internet, after all, the last update was Two years ago, and export was not supported, in case the developer made a decision one day…

Finally, if the issues with Snipd’s networking are still unacceptable, but can tolerate advertising and content regulatory rules, consider the Himalayas mentioned at the beginning.

This article is reproduced from: https://sspai.com/post/75736
This site is for inclusion only, and the copyright belongs to the original author.