Whenever players hear that a certain game has been “animated miserably”, they often have to look at it with complicated emotions. Generally speaking, it is “just move”, of course, there are times when “it’s almost done”, but “Cyber” Punk: Edge Walker is not one of the two categories. Once this animation adapted by the Trigger Club was broadcast on Netflix, it was like a dose of “Furekang” stuck in the hearts of all players who had been addicted to this world. Cool.

The animation has a subway that is not in the game

The animation inherits the Trigger Club’s consistently excellent production standards-smooth and tense fights, unique character settings, and highly restored scenes, all of which make the audience feel the full sincerity of the Trigger Club.

In terms of the plot, although it is still the traditional theme of “Boy Meets Girl”, under the careful depiction of Imaishi Yoyuki and Otsuka Masahiko, a cold and hot cyberpunk spiritual core is put into the story, giving birth to the Everyone’s “stamina” is lost. 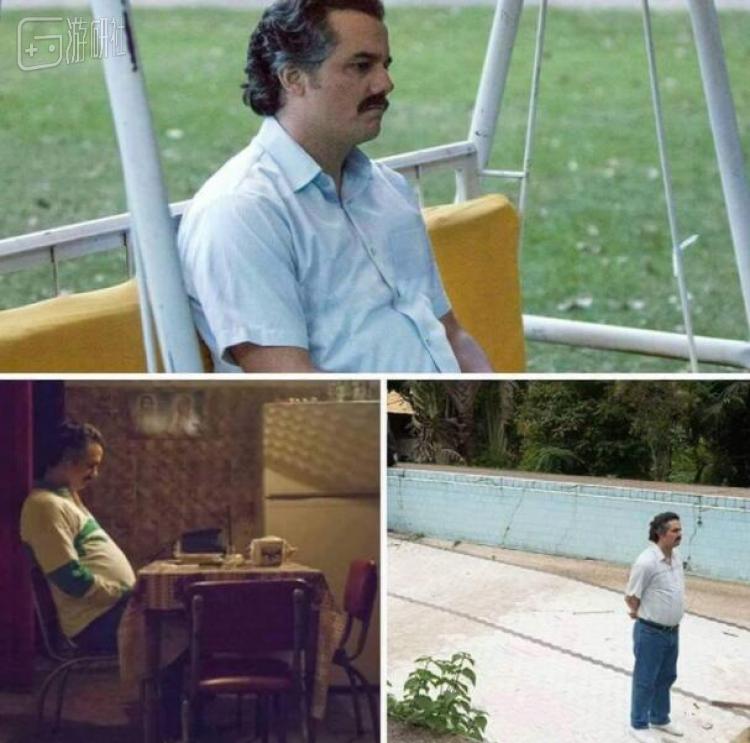 So players came back one after another, and the number of online gamers tripled in just a week. On the one hand, the 1.6 version update brought new game content, but more people just wanted to go back and have a look at the one that was highly restored by the animation. World, take a tour of the cyber sanctuary. Of course, ending the journey with a beating Adam Hammer is a natural choice for almost any V.

Hammer hammer, line up this team

However, the popularity of “Edgewalker” not only pushed the topic of the same name to the hot search, but also made another sensitive entry in the Western world on the Twitter trend – “Loli”. Loli (Roman word: Loli or Rori) is a descriptive word for girls who are at a certain age or have a certain body shape. It is one of the most famous cute attributes in the ACG subculture. This is the explanation of the entry loli in Mengniang Encyclopedia. In fact, it is the different understandings and attitudes of the East and the West towards loli that are the fundamental reasons for the discussion of the topic.

The discussion started when producer Saya Edler mentioned in an interview that there had been a vote within CDPR to remove the role of Rebecca, who they believed was a Loli and that Loli should not exist in Night City. The Trigger Club firmly rejected this move. According to her description, the Trigger Club was like saying “No, the loli must stay”. With the insistence of the Trigger Club, the beloved Rebecca was retained, and after the screening, she became the “Best girl” that even her earliest opponents praised.

Media coverage of the interview

From this interview, it is not difficult to see the sensitive attitude of the western world towards children, which is exactly the same. When the ignorant passers-by in the English-language online world see the topic of loli on the trend list, their first thought is “what the hell Pedophilia?”.

The word Loli originated from the novel “Lolita” by the Russian-American novelist Vladimir Nabokov. For people in the Western world, the word that is kept away means pedophilia, sex crimes, etc. , This attitude has also radiated to other aspects. A foreign UP owner at station B also said that in the mainstream concept of European society, JK and Lolita clothing are not recognized, and many girls who love this theme want to be free. Put on the clothes you like and can only move to an Asian country.

If you call a woman loli she will start running away

Compared with the usual opposition of the West, the situation in Japan, the animation paradise in the East, is more complicated. Before the Miyazaki incident, Japanese society had almost no laws in this area of ​​child pornography, and the market was full of child sex portraits and loli pornographic cartoons. After the Miyazaki incident, because the police found a large number of pornographic video tapes in Miyazaki’s home, the public believed that pornography was the inducement to Miyazaki’s crime, especially child pornography. Coupled with the media’s fueling and false reports, the blame is directed at the entire “otaku”. Even normal works will inevitably fall into a storm of public opinion, and the ACGN industry has fallen into depression.

Of course, the recovery is coming soon. The huge market and output capabilities have made the ACGN industry quickly get rid of the stigma. At the same time, the loli theme has ushered in its second spring after the market standardization. Many loli characters that we are familiar with are born from this. . 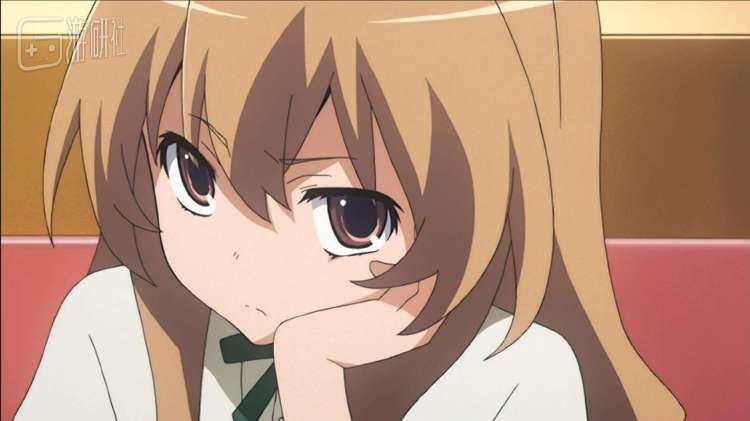 The tiger in the palm is a typical loli

However, the influence of Miyazaki’s incident did not dissipate. In order to avoid risks, the creators developed the habit of blurring the age of the characters, and even simply insisted on painting sisters. This common tacit understanding in the industry has led to the change of the meaning of the word loli in Japan – referring to the petite body size and appearance, without emphasizing age. 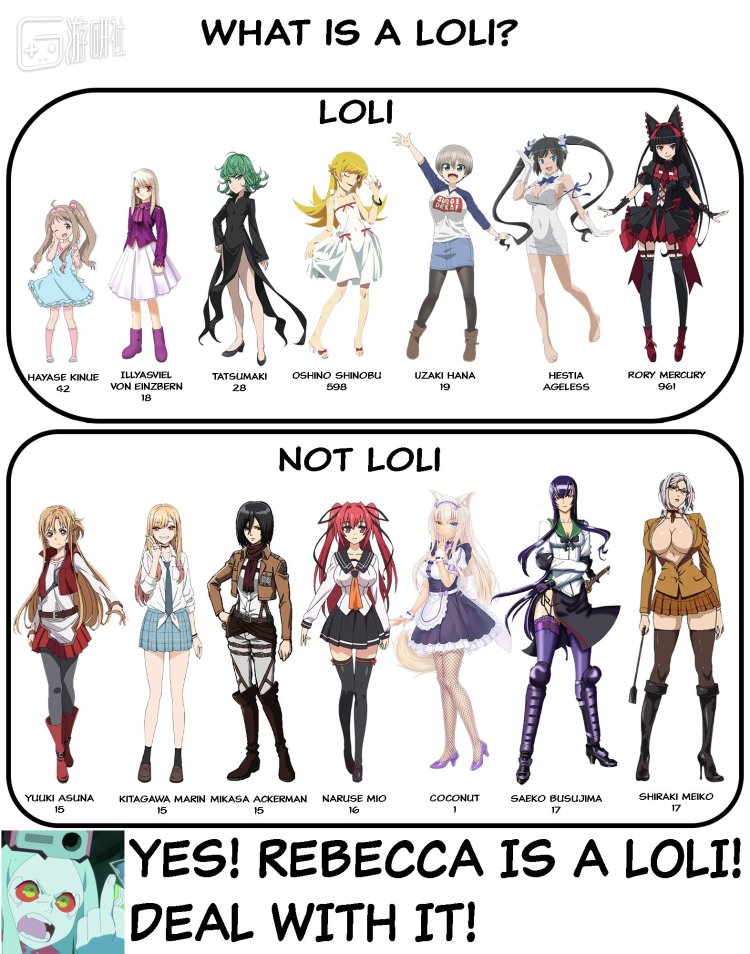 All in all, the different understandings of loli in the East and the West have contributed to the behind-the-scenes anecdote of “The Trigger Club is angry and protected loli”, and it has also triggered many discussions outside the show: “Does loli refer to underage girls or single-pointed short and cute girls?” Does Rebecca count as loli”, “Should loli be used to describe a grown woman” and so on. For those familiar with Japanese animation, the answer shouldn’t be a problem at all, but in the eyes of other passersby it may be a bit of a fight.

In any case, the audience is grateful for the persistence of the Trigger Club. It is the courage and confidence of the Japanese producers that allow us to meet such a “Best girl”. In recent years, political correctness has become more and more common in the Western world. Whether it is games or animations, creators are forced to make certain compromises for their works. In such a large environment, the Japanese factory is somewhat stubborn and conservative. It seems to be more precious. “Fortunately, Japan Factory Aesthetics Online” is also a word repeatedly mentioned by players. 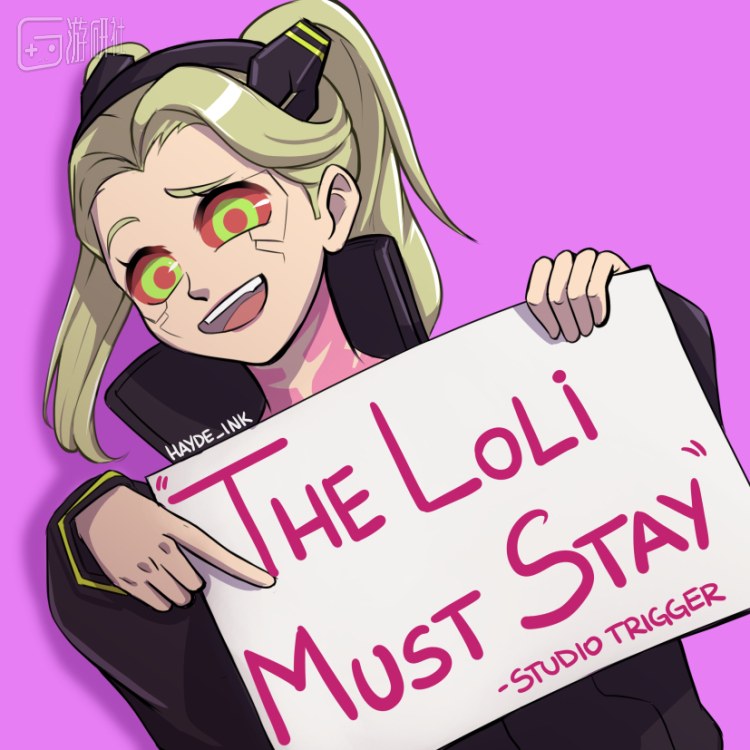 The Loli Must Stay

This article is reprinted from: https://www.yystv.cn/p/9793
This site is for inclusion only, and the copyright belongs to the original author.