Insects, the most successful group of arthropods, are the de facto rulers of the planet today. Its diversity is second to none in the biological world.

The number of species is so large that the rest of the species together cannot be compared (60% of all living things). Up to the blue sky, down to the vast land and different waters, there are all the shadows of insects.

Even in the contest with the self-proclaimed human beings, he is not at a disadvantage. Whether it is a cockroach, a master of psychological warfare, who has left a psychological shadow on countless people, or a mosquito that has won the top ranking in the eradication of human beings by spreading diseases, they are all giants of the insect world who dominate one side.

In this issue of “Mesozoic Past”, the author will take a look at the history of this huge empire.

The Flying “Revolution” and the Destruction of the First Empire

The insect empire was first established in the early Ordovician period 480 million years ago, and its taxa can be divided into the first empire (Paleozoic insect fauna) and the second empire (modern insect fauna).

In the Devonian period, about 400 million years ago, the insect empire experienced the first “industrial revolution” and invented the ability to power flight . The fluttering insect became the first species in the entire animal kingdom to take to the skies. The Insect Empire, which established an independent air force, quickly expanded its sphere of influence, and soon gained a firm foothold on the less lush land, which also made the First Empire prosper.

However, Daddy Earth’s violent temper is never absent, just like the economic crisis of capitalist countries. The five mass extinctions that the earth has experienced since the Cambrian period (more small, but not as large as these five) have tossed all living things to a screeching halt.

Among them , the biological mass extinction at the end of the Permian period, as the largest imperial cemetery , caused heavy damage to almost all biological empires at that time. The insect’s arthropod relative, the trilobite empire, was also declared dead after nearly 300 million years of establishment. Insects are of course no exception. The first empire of insects, which has been brilliant for more than 200 million years, has since declined…

Like all ancient species that have survived to this day, insects have never been a loser. Don’t be afraid of subjugation, as long as you don’t kill the species, we will rebuild it for you in minutes.

So in the Mesozoic Era after the mass extinction, the insect empire ushered in a ” second revolution “, the main contents of which include:

1: The rise of fully metamorphic insects ;

2: The great development of insect mimicry and camouflage behavior;

4: The emergence of parasitic insects in the middle of the Mesozoic;

5: Radiation and succession of pollinators .

The “Second Revolution” gave the Insect Empire a stronger viability, and the Second Insect Empire began to be established and continues to this day.

Below, the author will detail the five “revolutionary” measures that have brought the insect empire back to glory.

The development of five “revolutionary” initiatives in the Mesozoic. Among them, the mimetic mainly marked the approximate time of the cover camouflage (photo source: modified from Wang Bo)

Insects rise and insects fall into a scene, completely perverted and full of vitality!

Complete metamorphosis refers to insects that go through four stages in their life: egg, larva, pupa, and adult. Larvae and adults are not only different in external form and internal structure, but in most cases their feeding habits and living habits are also far apart.

Fully metamorphic insects are the most diverse members of the empire today (over 95% diversity). Therefore, it is not an exaggeration to call it the most successful “revolutionary fruit” of the empire. Although it appeared during the First Empire in the Carboniferous period, it really began to dominate the center of the empire in the early Mesozoic .

This is evidenced by the large number of holometamorphic insect fossils from Middle Triassic strata in China and France. This is because the Triassic , as a famous “chaotic era” in geological history, had more ups and downs in environmental changes. The pupal stage of fully metamorphic insects can better protect the insect body, and at the same time, it can avoid the food and environment involution of adults and larvae, which can greatly expand the population.

After all, you eat grass in the sky, and I am bubbling in the water, so that the years will be peaceful. The large radiation of plants in the Middle Triassic period also gave the holomorphic insects the right time and place, and the above conditions prompted the “emerging class” of the empire to rise and eventually reach glory.

The Oscars of the Mesozoic era are all about acting

In the human world, the new Academy Awards ceremony has ended. Will Smith’s slap can be described as shocking at home and abroad, and it is also rude to win the crown of best actor. Compared with Oscar’s various political correctness and personal preferences, nature can only look at acting.

Camouflage and imitation are ubiquitous in nature. These various cosplays are not to please any judges, most of them are to survive. Insects are masters here, and some of the living species have performed superbly and completely integrated into the environment.

However, the acting skills condensed in the fossil data are not so common. Although somewhat controversial, the more generally accepted opinion is that insect mimicry should have its origins in the Paleozoic . In the early days, simple mimicry was mainly carried out by wings, and in the Mesozoic, mimicry insects began to develop by leaps and bounds.

Related mimetic assemblages have been discovered and described in the Daohugou biota in Inner Mongolia, which belongs to the Jurassic period. However, the COSPLAY in the Jurassic period was only a nascent pediatrician. By the Cretaceous period, the acting skills of insects began to become adept. 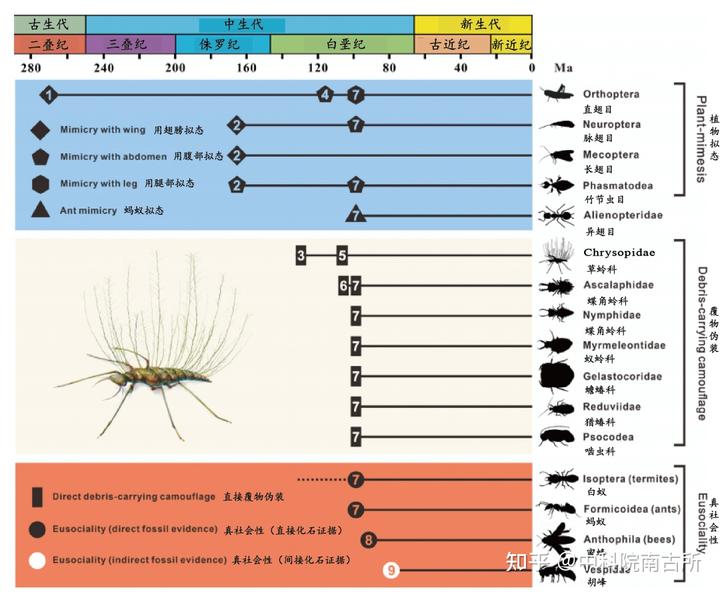 Many insects turn some of their body structures into part of their COS. For example, in the Early Cretaceous strata of Brazil, a kind of stick insect (Clade locust) has been found, and they use their slender prothorax, legs and abdomen to turn themselves into a branch. In the Kachin Amber in the middle of the Cretaceous period, the peak of acting skills has dazzled the judges, including the juvenile bugs who have shown extremely superb performance levels. Among them, the larvae of Lacewings Huang’s (belonging to Lacewings of the order Neuroptera) and the Lacewings of Wang’s (Orthoptera) had a fierce competition for the best actor award for Selaginella mimicry.

However, it is up to readers to judge who will win. These exaggerated and realistic body art and cosplay brought different colors and influences to the ancient environment of the Mesozoic, and they continue to this day. 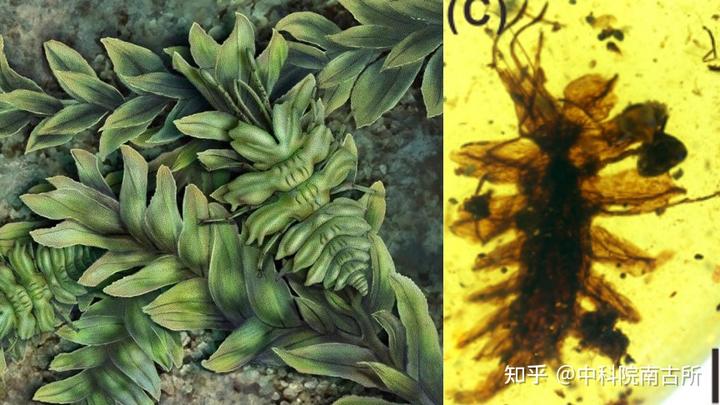 a, c: Selaginella species b: Pseudomonas

2. Find a new way and make use of props

In addition to using one’s own limbs to imitate the real, there is a method called camouflage that is also very effective. Simply put, it is to directly load plant fragments on yourself.

This human fashion show-like approach is most common among the larvae of the order Neuroptera and Hemiptera, which like to put some earthy flowers and plants on their bodies to integrate themselves with the environment.

Although there is no associated fossil record of mimicry and mimicry in the Triassic, it is inferred from the Jurassic to Cretaceous records that insect mimicry and camouflage became increasingly complex and diverse . By the mid-Cretaceous period, most of the surviving insects with the ability to cover camouflage independently evolved this trick. This shows that in the era when angiosperms began to radiate, insects were already facing similar environmental pressures as they are now. 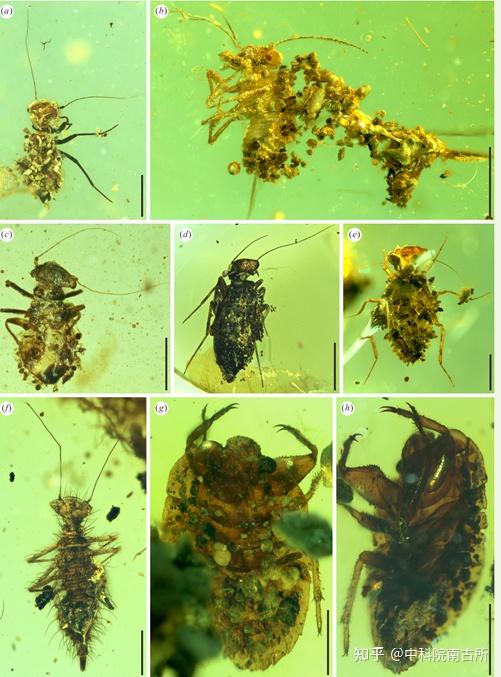 The next issue of Mesozoic Past will bring about the third major “revolutionary” measure of insects—the multiple origins and changes of eusociality. See how little insects form their own “torrent of steel”, see you in the next issue!

[10] Heads, SW (2008) The fifirst fossil Proscopiidae (Insecta, Orthoptera, Eumastacoidea) with comments on the historical biogeography and evolution of the family. Palaeontology 51, 499–507

“Metamorphosis” and “Drama” | Mesozoic Past: The “Second Revolution” of the Insect Empire (Part 1)

This article is reproduced from: http://zhuanlan.zhihu.com/p/502210130?utm_campaign=rss&utm_medium=rss&utm_source=rss&utm_content=title
This site is for inclusion only, and the copyright belongs to the original author.