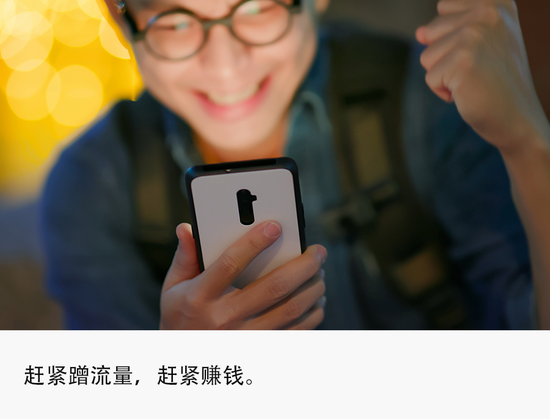 It is said that Zhang Jiaxu, who started a business in an apartment in Changping, Beijing, should not dare to imagine that one day he will become the pride of his alma mater.

As the mini game “Sheep and Sheep” continues to top Weibo’s hot search, this mini game made by only 3 people has been on the screen for more than two weeks. On top of the popularity, the background of Zhang Jiaxu, the founder of “Sheep and Goat”, has also begun to attract attention, and he has even become an honorary alumnus in the enrollment promotion exhibition of his mother’s school.

Many similar products have also emerged to gain the popularity of this game. According to data from Qimai, starting from September 13, the search results of the “Yang Liao Ge Yang” app soared from 0 to 127. “Sheep blew a sheep”, “cow made a cow”, “pig made a pig”, “meow made a meow”, “wow made a wang” and so on, there is a great tendency for zoos to come out of the circle collectively.

At present, the popularity of “The Sheep and the Sheep” is still continuing, and the Douyin “The Sheep and the Sheep” has been played 11.32 billion times. In order to improve the retention rate, last weekend, “Sheep A Sheep” reduced the difficulty of the second level, which was originally called “perverted”. Many students who were ready to abandon the pit took screenshots to say “finally passed the level and entered the flock”.

Although the rumor that “Sheep Luck a Sheep” has a daily income of 4.68 million has been denied by the founder. However, many small game peers are still greedy for the popularity of “Sheep and Goat”, and various high-quality imitation games emerge in an endless stream. Everyone expects to get traffic and make money in this wave of popularity.

It’s just that many small games have a short life cycle, and persistent problems such as plagiarism of gameplay, changing skins, and paying for routines have always existed. The enthusiasm of users who are about to be exhausted has made it difficult to make money for “sheep and sheep”.

“Sheep is a sheep” continues to explode

After creating 22 hot searches in 48 hours, the popularity of “Sheep A Sheep” continues.

Zhang Jiaxu, the founder of the little game “Sheep and Sheep”, has become an outstanding alumnus of the school. Just two days ago, on the New Year’s Day, his mother, the School of Governance, made a large-scale exhibition board with a length of 2 meters and a height of 1.5 meters and placed it on the campus for exhibition, attracting countless students to watch. This little-known secondary school has attracted attention, and Zhang Jiaxu has become a live admissions advertisement.

The founder of a small game that was despised by many people in the game circle became an admissions advertisement, and this practice was criticized by many people. Some netizens believe that “The Sheep” has plagiarized “3tiles”, and even questioned whether Changzhi College encouraged plagiarism by doing so?

However, this did not affect the popularity of “The Sheep”. On Douyin, the topical video about “Sheep Luck a Sheep” has been played 11.30 billion times.

At the same time, there are several video tutorials on the customs clearance skills of “The Sheep” on the short video platform, and there are also live video broadcasts to teach you to clear the customs. Because after 12 o’clock every night, “The Sheep” will reset the game, so a batch of “Sheep and a Sheep” daily pass skills have appeared on major short video platforms.

Tech Planet Browsing found that an anchor who taught players how to pass the level welcomed nearly 800 viewers on the afternoon of September 26. This figure is not high in the Douyin live broadcast room, but considering that he only has 3085 fans, 800 people watch it is extremely impressive. Because on Douyin, some anchors with more than 100,000 fans may only have a few hundred views.

Legend: The anchor teaches how to pass the test.

“The Sheep” is accused of plagiarizing the stacking elimination game “3tiles”, which has been online for two years. The relevant person in charge of Jianyou Technology, the company behind “Sheep and Sheep” previously responded that if the “three in a row” gameplay is considered plagiarism, then there are too many such games, the company will not pay attention to this, and users naturally have their own judgment.

Interestingly, after the popularity of “The Sheep”, “3tiles” also ushered in a highlight moment, ranking first in the free entertainment list of the Apple App Store for several days.

In order to allow more people to pass the level, on September 23, “Sheep A Sheep” lowered the difficulty of the game. In the afternoon of the same day, many users said that they passed it successfully. According to statistics from Guangming.com, more than 60,000 people passed the customs in the hour from 11:35 to 12:35 that day.

Replicas are flooding, change a vest to get hot

The explosion of “Sheep A Sheep” also brought a wave of hot replicas.

If it is not the props at the bottom of the game page, you may not realize that this is not a “Sheep” game.

This game that has been on the iOS game free rankings for many times and has been taken off the shelves many times is called “Sheep baa sheep”. It has the same elimination legend as “Sheep,” such as buckets, flames, forks, milk bottles, etc. of the same color and shape, and what’s even more outrageous is that they also use the same background music – ilem’s ” Ordinary disco.

The only difference might be the size, background color and legend via props. Of course, there are also logos. “The Sheep” is a sheep, and “The Sheep” is five. 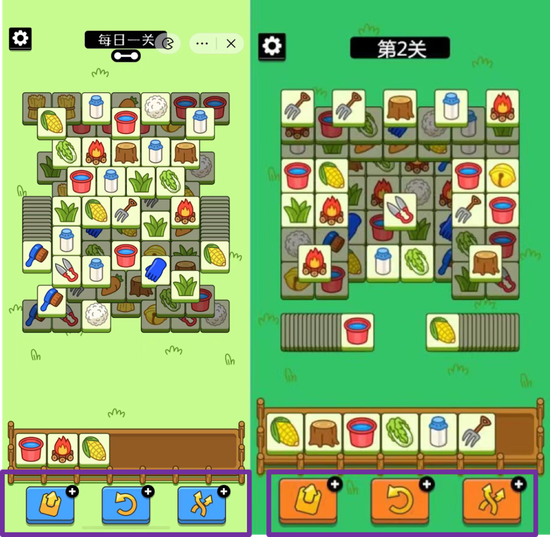 This is probably the hottest of all the “sheep for a sheep” replicas. According to the Apple App Store information, this game was originally launched 2 years ago. At that time, its name was “One Pen One Link”, and it was renamed in the following four months: “Fun Graffiti Master” and “Lipstick Master Tu.” “Color”, “Diamond Square” and “Coloring Little Expert Game”, and after 7 updates, it was renamed “Coloring Little Expert Game” at the end of July 2020, and then it was basically suspended.

The next update was on September 16. At that time, “Sheep’s Sheep” was continuing to explode, and the game was renamed “Sheep’s Baa Sheep”.

According to statistics from Qimai, this game has been taken off the shelves many times, the most recent one being at 14:00 on September 22.

On Douyin, if you have ever played “Sheep Got a Sheep”, his replicas will also appear in the daily recommended information stream, such as “Cow Got a Cow”, “Pig Got a Pig”, “Meow” A Meow”, “Wow Aww” and so on.

Legend: From left to right are the small game interfaces of “Cow got a cow”, “Pig got a pig”, “Meow got a meow”, and “Wang got a wang”.

The interface of these replicas is highly similar to “The Sheep”. Take “Cow and a Cow” as an example, it is the same match-3 mode, and the types of props are the same as “a sheep and a sheep”. The difference is that it has an infinite props mode, but the clearance rate on September 23 was only 0.08%.

A game industry practitioner said that the cost of plagiarism of this kind of small game is very low. The difficulty is traffic. Without traffic, no one is playing. No matter how good you do it, it is useless.

With traffic, it is possible to bring wealth. This is probably the myth that small game practitioners dream of, and it is also the source of frequent copies.

The Myth of Get Rich Can’t Be Replicated

On September 14, Ma Huateng, chairman of Tencent’s board of directors, personally refuted the rumor that “The Sheep Got a Sheep” earned 4.68 million per day.

According to the analysis of relevant persons, there is no version number for small games such as “The Sheep”. It is also impossible to take the road of charging for in-app purchases of game items, and can only generate income through advertising. Based on the calculation of the DAU traffic of over 10 million in the early stage of this game, it is still possible to “get rich” through advertising.

But after just two weeks, the shortcomings of the short life cycle of small games and the difficulty of monetization were exposed.

According to a blogger’s calculation, it is estimated that 3 items are used in one round, and it takes about 75 minutes of advertisements to play 50 games. And as the number of games played increases, the duration of advertisements you need to watch does not decrease marginally, but gradually increases. For example, it takes 2.5 hours to watch an advertisement for 100 games, which causes many people to quit.

Some netizens even said on social platforms that another scam will be linked in these advertisements. Li Tao said that he downloaded a digital name game through the advertisement of “Sheep and A Sheep”, “I played it for a week to level 28, and the upgrade will not move. I was expecting to withdraw 300 when I reached level 32. I lied to read it. With so many advertisements, where can you complain?”

Perhaps “The Sheep” has no time to pay attention to these negative public opinions, and it is still the most important thing to make money quickly. After all, from the WeChat search index, the popularity of “Sheep’s Goat” and many high-quality imitation games has dropped sharply. The loss of traffic also means that the myth of getting rich is more difficult to replicate. 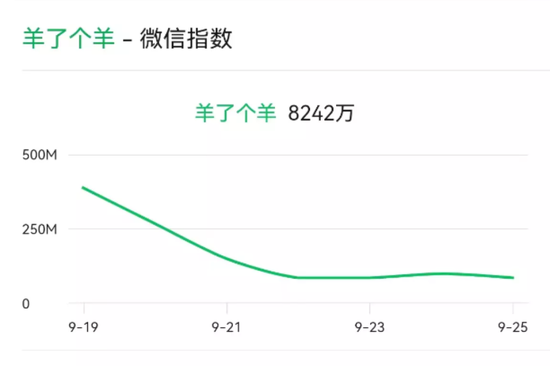 In the remaining life cycle of small games, accelerating monetization is the current priority, but this is undoubtedly also destroying the user’s game experience. According to data from Qimai, a number of high imitation games were hit and removed from the shelves on September 21. The reason behind this is related to the police’s reminder that these game advertisements are easy to be deceived.

The prolonged advertising duration and unscreened advertising content are the thirst for realization of the “sheep and sheep”. After the fish is exhausted, “Sheep’s Goat” is going to be re-launched on the APP, and will there be a market for future version iterations?

This article is reproduced from: http://finance.sina.com.cn/tech/csj/2022-09-27/doc-imqqsmrp0617345.shtml
This site is for inclusion only, and the copyright belongs to the original author.