Watch a movie well, you can’t skip it if you have to insert a few games.

For a long time, game screen performance has always been an important element to attract players, especially in the age of underdeveloped network information, it is not easy for people to try unreleased games, relying more on static propaganda of print media, and few The offline exhibition is not like the experience version that can be easily obtained now. In such an environment, it is normal for games to appear “spoofing”. In order to prevent themselves from buying games with real money, players will rely more on the works of famous brands and professional media evaluations.

But even so, there are times when the car rolls over. More than 20 years ago, Square had a work that sold nearly one million, and the media ratings were not bad. However, players have expressed that they were fooled, and today it is regarded as a laughing stock. This wonderful work The game is The Bouncer on the PS2 console. 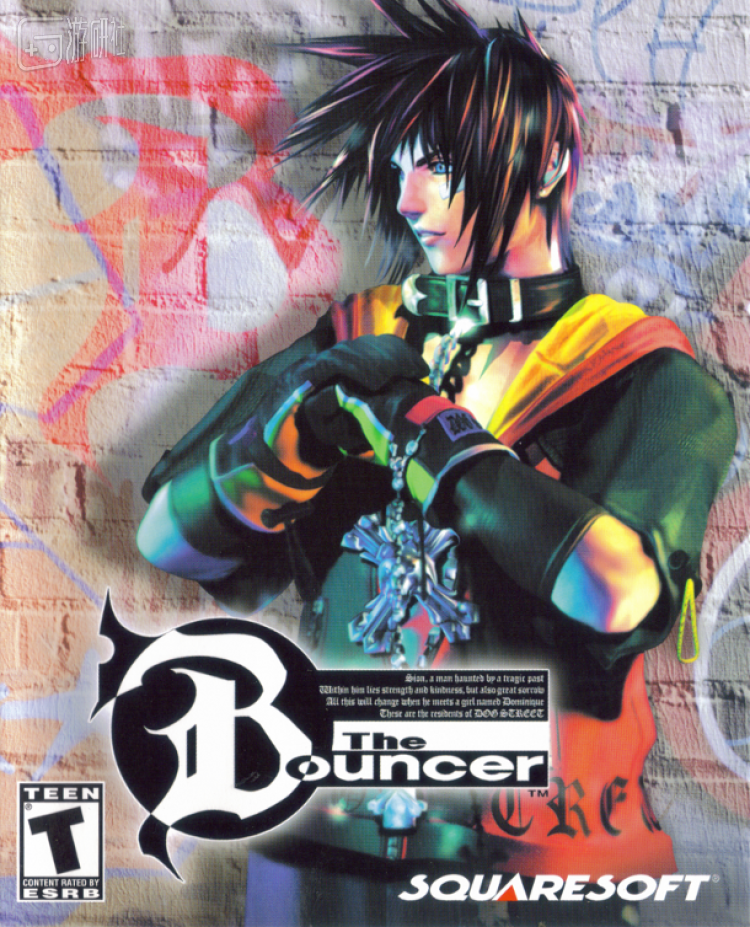 In the late 1990s, Square chose Sony’s new PS console as a platform to realize its game concept. The first shot was the famous “Final Fantasy 7”, which used revolutionary 3D polygonal graphics and large capacity. The CD-ROM realized a spectacular display of the game world, and finally achieved an astonishing sales volume of 9.72 million sets. This work has allowed the entire industry to see the new form of future games, and it is also the most important turning point in the war between Sony and Sega.

In addition to the “Final Fantasy” series, Square has also launched a number of masterpieces such as “Parasite Eve”, “Xenogic Armor”, “Crossing Time”, “Frontline Mission” and “The Adventure of the Wild”, which have achieved great success in both sales and word of mouth. It can be said that It is the most dazzling manufacturer of PS consoles, and players generally agree that “Shi’s products must be excellent products”. 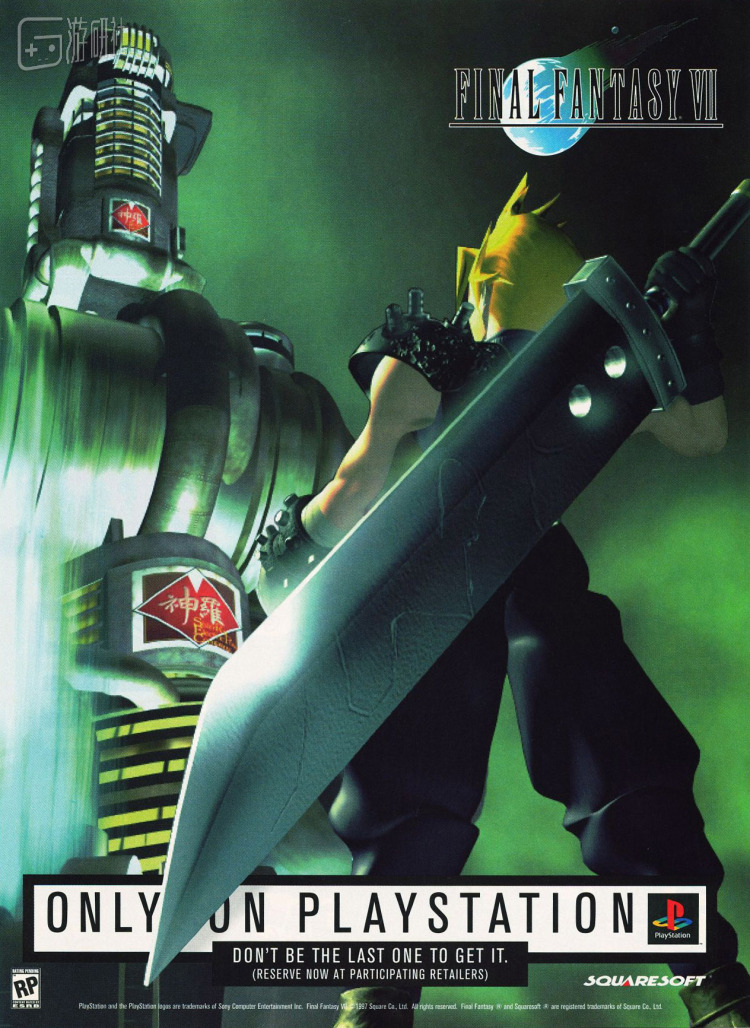 Square games in the PS era have generally added a large number of beautifully produced animated CGs, which have been widely publicized and displayed as features. On the one hand, the gorgeous performance of these CGs makes players feel fresh; on the other hand, the performance of the PS host is not enough. Supports full 3D polygonal images. Masterpieces such as “Final Fantasy”, “Parasite Eve”, and “Resident Evil” all use a mixed form of pre-rendered 2D background + 3D characters. At the same time, the use of real-time calculation to explain the cutscenes seems very rough, so the level of refinement CG far beyond the game polygon is essential.

For players, CG playback actually interrupts the game operation. If used reasonably, it can make the whole process experience relaxed and achieve good results, but too much CG will make the game fragmented. Square in the PS era With the top-level CG production, I have tasted great benefits, but I didn’t expect to fall into a big somersault because of CG soon. 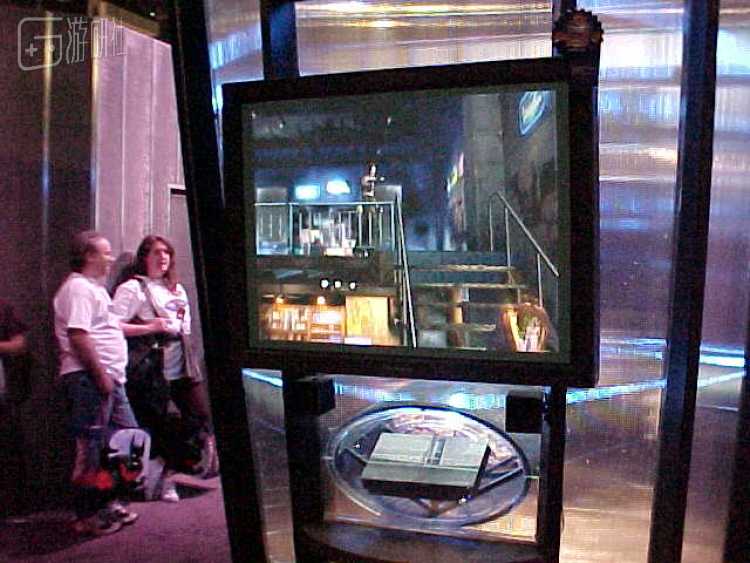 The first public demonstration of the bodyguard game

Time came to 2000, Sony’s new generation PS2 console was released, and players were also full of expectations, hoping to see a shocking masterpiece like the PS version of “Final Fantasy 7”, and soon Square announced the first PS2 console work. “bodyguard”. The production lineup of this work is very strong, with Shinji Hashimoto as the producer, Takaji Tokita as the director, Tetsuya Nomura as the character designer, Kako Matsuede and Takaeko Eguchi are responsible for the composition, the development team is Dream Factory, who worked on the PS console to produce ” Planetary Fighting (Tobal) and other games. 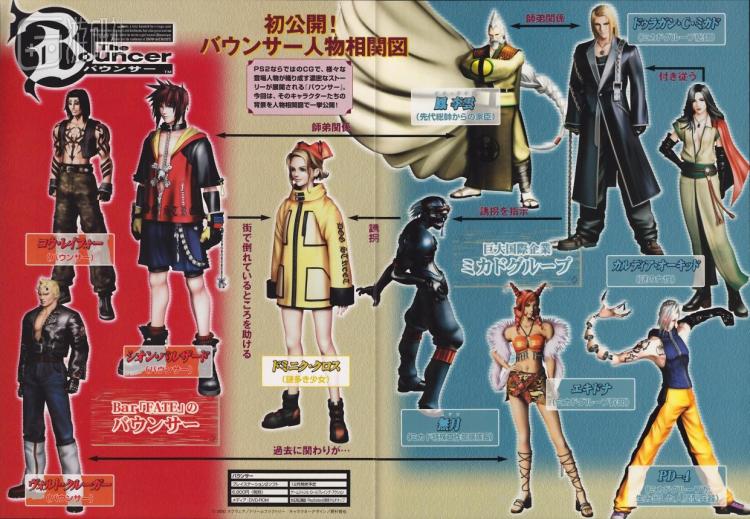 The story of “Bodyguard” is set in a city called Edge, which is the headquarters of Mikado, a multinational business conglomerate with huge influence in fields such as biomimicry, robotics, energy technology, etc. Under the leadership of new CEO Dauragon, Begin construction of an orbiting satellite system to efficiently harvest solar energy. The Edge city has long been considered a place full of despair and corruption. Gangs roam the streets and criminal activities are endless. There is a bar called FATE. The three protagonists Sion, Kou and Volt are the bodyguards watching the scene here. They were safe and sound, but suddenly one day their friend Dominique was kidnapped, and in order to rescue her, everyone was forced to be involved in a conspiracy. 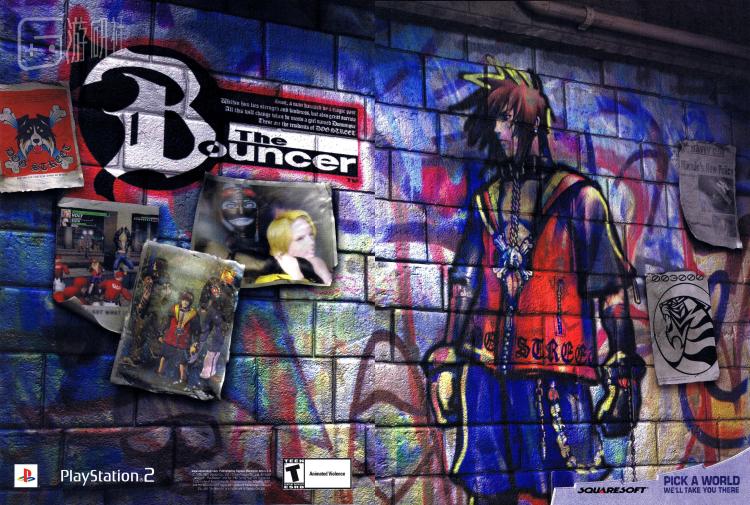 As Square’s first game on the PS2 console, this game still brings great innovation to players in terms of screen performance. The greatly improved polygon processing capability makes high-quality full 3D scenes possible, and the halo-blur style coloring performance also makes the game It is full of the visual sense of the movie, and the depth of field technology is also widely used to maximize the performance of the host hardware as much as possible. Director Tokita Takashi mentioned in an interview in 2001 that the reasonable use of filters and lighting during the development of “Bodyguard” greatly reduced the pressure on polygon processing, especially when the anti-aliasing option was turned on. 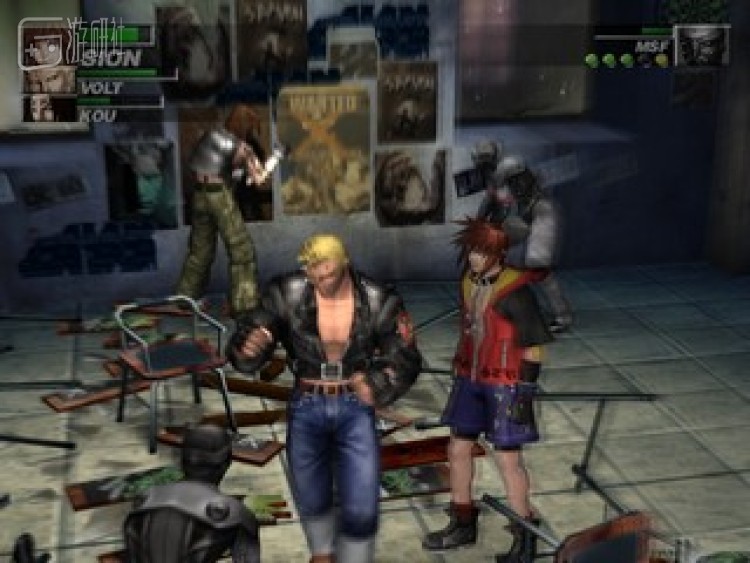 The actual screen of the game

The basic gameplay of “Bodyguard” uses arcade-like actions to pass the level. Square has also introduced a new physics engine this time. Players can hit the enemy into the air and levitate them through continuous attacks. The enemy can also throw each other. Crash, causing multiple enemies to be damaged at the same time. Although this method is contrary to the physical principles, it allows players to have enough space to display their skills, and it has also become the standard for action games such as “Devil May Cry”. 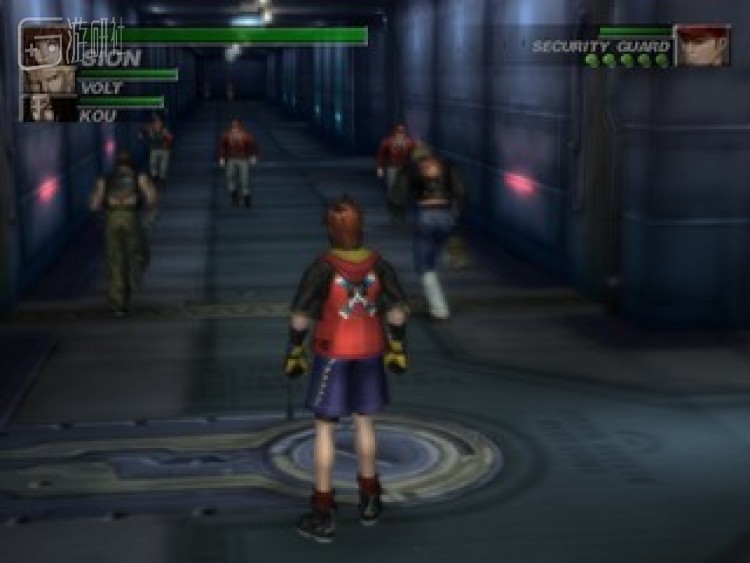 The actual screen of the game

When Square announced the promotional screen, it did give players a lot of shock. Both the scenes and characters showed the powerful strength of a new generation of consoles. At the same time, Tetsuya Nomura’s character design is also a style that players are very familiar with. Several protagonists The prototype can be found in “Final Fantasy 8”, the boss is more like the popular villain Sephiroth, plus the city full of technology style, this is properly a “Final Fantasy Action Edition”, Shi’s factory is trustworthy . 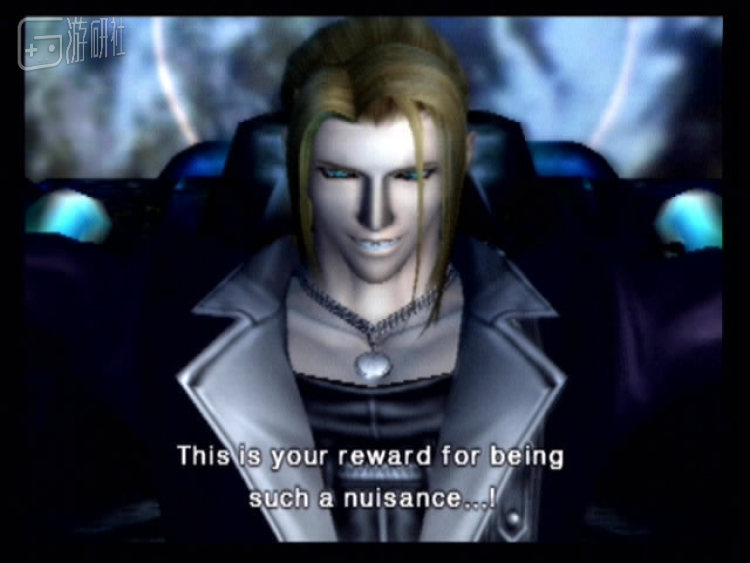 On December 23, 2000, “Bodyguard” was officially released as a masterpiece of early publicity for the PS2 console. It soon achieved a global sales volume of 990,000 sets. This achievement was not bad when the new console was not yet fully popularized. Out of 31 points of Silver Palace evaluation. There are also some players in China who bought genuine discs at high prices. The Japanese version was priced at 6,800 yen, which was really not cheap at the time, but soon regretted it. You can buy it for a few dozen yuan, and Shi’s big factory has greatly disappointed the players this time. 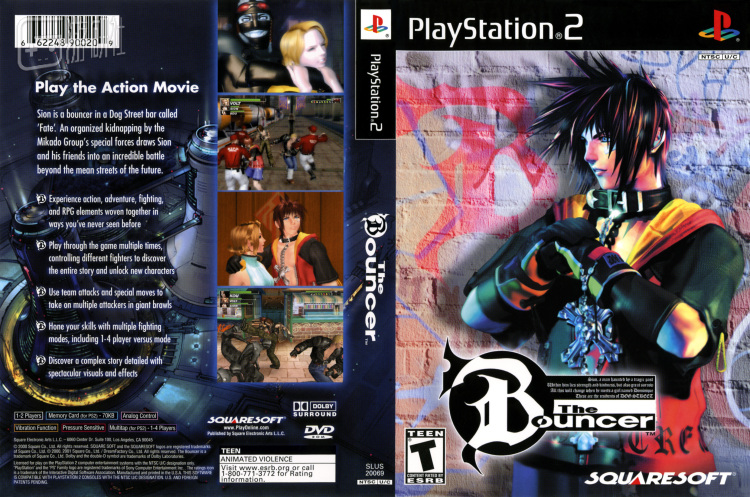 So is “Bodyguard” a falsely advertised “photo cheat” game? Really not, the previous demo did not shrink, and the characters also made their debut, but this time Square brings players a work that is empty and without connotation.

The game adopts the form of three-person cooperative action and is divided into several chapters. Before each chapter starts, you can choose the role of the operation, and the other two are controlled by AI. After the chapter is over, you will be rewarded according to the player’s performance. Points are used to improve There are three basic attributes of life, strength, and defense, as well as unlocking a variety of nirvana, and animations explain the plot between chapters. This mode sounds okay, and normally it takes about two hours to complete the game, but if you skip all the cutscenes, you can get through it in about half an hour.

The game is full of cutscenes

The experience of players in “Bodyguard” is to fight a battle for a few minutes, and then watch animations for more than ten minutes. In this cycle, there is very little content that can be truly interactive. Dream Factory, who developed fighting games, obviously has no experience in action games. All battle scenes are independent of each other, and then linked together by animation. If you don’t watch the animation, you can’t figure out how the three came from A. Continue to call to B. Compared with the traditional arcade action we are familiar with, the level is over as soon as the player finishes a wave of soldiers. There is absolutely no such thing as a specific continuous scene in a certain level. The enemy appears in layers, and finally it is logical to defeat the BOSS at the end of the level. A refreshing combat experience with ups and downs. 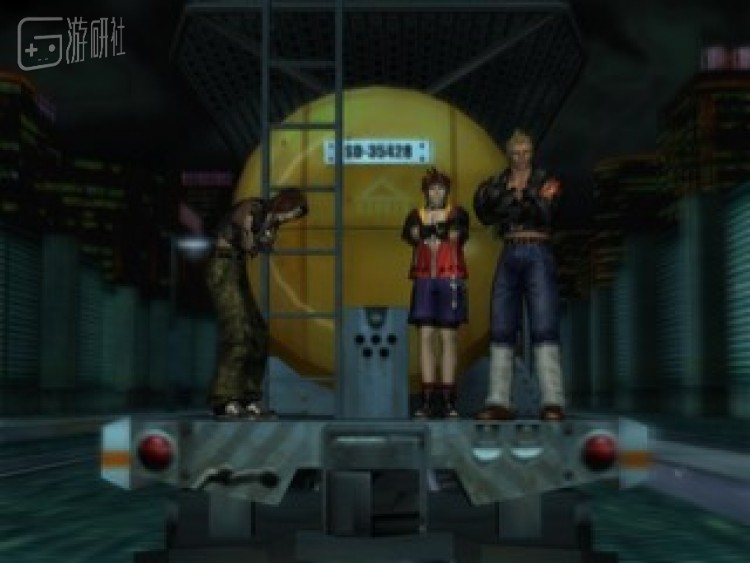 The battle scenes are all connected by animation

Fortunately, the game has designed a function to skip animations. Otherwise, players would really have to smash the controller. The upgrades accumulated during each clearance process can be carried over to the next episode. I have no interest in watching it anymore, skipping the animation and quickly clearing the level has become the only fun, and I don’t want to touch it again after repeating it a few times. In addition to the main story, the game also designed a battle mode and a survival mode. You can use the characters developed in the story mode, which is also less interesting to play. 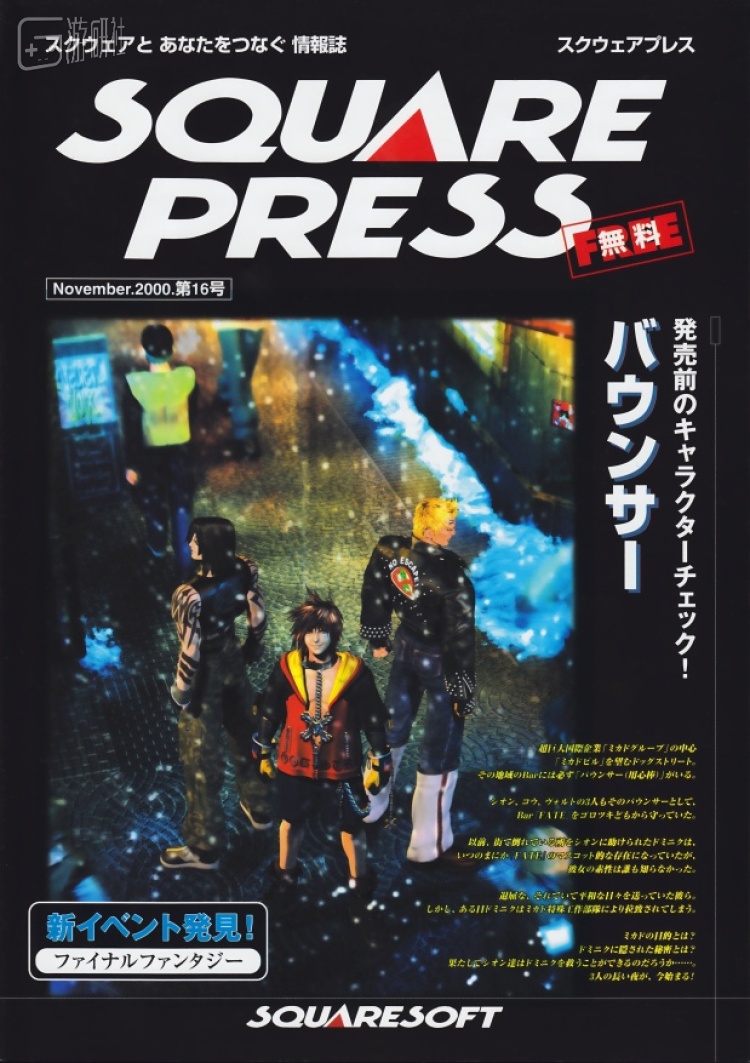 The game poster is really good

The experience of “Bodyguard” can be summed up in one sentence: “Watch a good movie, you have to insert a few games, but you can’t skip it.” Although such a work uses the most advanced technology at the time, it ignores the most essential content of the game: Human-computer interaction, this is also an unsuccessful attempt by Square to take a slanted edge after the huge success of CG in the PS era. What is even more unfortunate is that Square’s overly superstitious approach to CG soon failed. In July 2001, the full CG movie “Final Fantasy Deep Soul” lost a total of 94 million US dollars, almost all of Square’s many years in the industry. The accumulation of the game market has not slowed down for a long time.

The most unsuccessful case of game adaptation movies

Now looking at the game “Bodyguard” where cutscenes account for 70-80% of the experience, it is definitely an alternative and wonderful. Fortunately, Square adjusted it in time, and the PS2 console still left us “Final Fantasy 10” and “Kingdom”. “Heart” and other classic memories, and “Bodyguard” we can miss today, only the theme song “Love Is The Gift” sung by Shanice Wilson, as for the game itself, I am afraid no one wants to touch it anymore.

This article is reproduced from: https://www.yystv.cn/p/9721
This site is for inclusion only, and the copyright belongs to the original author.