There is a saying in medicine that “talking about toxicity without dose is hooliganism”, and for investment, talking about market value without the balance sheet, I think the same is true. Regarding Haikong, there are two different voices, one is “buy at low PE and sell at high PE”, and the other is “buy when the boom is up and sell when the boom is down”. Regarding these two views, there must be very It makes sense, but it is impossible to invest without looking at the fundamentals. Otherwise, it is speculation, and there will always be suspicions of spreading flowers. Retail investors can be foolish, but large funds must not be able to hold long-term positions in places that deviate far from long-term value.

We prefer to review Haikong’s balance sheet to carefully analyze his assets:

1. The value of COSCO SHIPPING’s ports cannot be negative. Re-look at the EV value of Haikong Container Lines

When estimating enterprise value, one method is to look at EV/EBITDA. It is said that Haikong’s EBITDA may decline. Let’s look at the denominator first, which is EV value. However, Haikong is divided into two parts. One part is COSCO Shipping Ports. This part has little cash and heavy debts, but is an independent legal person. It has been operating with good performance for many years and cannot be negative. We are conservative and assume Its EV is 0. After all, it is not a negative-value asset. In fact, it is still high-quality support. I will analyze it in detail later.

We use the interim report of Hong Kong stocks to remove the port part of Haikong and the minority interests of OOIL International, and then look at the corporate assets of Haikong:

In terms of debt, after deducting the huge debt of the port, the short-term loan of Haikong has been close to zero, and the long-term debt has been reduced to 30.5 billion yuan.

We can record the total liabilities-total cash as -188.7 billion yuan, because the port can be self-financing.

Whether it is A shares or H shares, the EV value of Haikong has been less than 0 or is about to be less than 0, which has never appeared in other cyclical stocks.

2. Capital commitments and long-term investments do not constitute a significant factor affecting the balance sheet

Regarding the argument that cyclical stocks are sold at low PE, one reason is that cyclical companies will increase investment at the peak of earnings, and aggressive financial investment will become an important reason for losses in the future.

Let’s take a look at how Haikong is doing in this epidemic cycle.

During the two-year boom, Haikong has repaid 77.2 billion yuan of debt, including 12.8 billion short-term debt, 58 billion long-term borrowing, and 13.2 billion bonds payable, basically reducing the debt of the container shipping part to a minimum. After all, long-term debt is a contract loan, repayment on schedule improves credit in the loan market, and all due debts have been fully repaid.

Among them, we see a rise in debt maturing within a year, but this is where we commend Haikong:

Among them, there are 14 billion short-term expiring lease contracts, which account for a quarter of Haikong’s 52 billion right-of-use assets. Haikong chartered ships at a relatively high price at the time in 2020. These ships are already in the period of cancellation. It has been pointed out in the previous article that 200,000 TEU of ships have been returned in the past six months, which also represents the prosperity of Haikong. restraint.

In contrast, CMA CGM, which bought US$6 billion in ship assets a year, also acquired MSC, which has twice the loading capacity of CMA CGM. If the industry continues to maintain its prosperity, because Haikong will start to deliver large ships in the first half of next year, the carrying capacity will not decline. If the industry goes down, Haikong will undoubtedly have a lower number of leased assets with high-priced leases due to expire. Average cost of ownership and lower depreciation performance and cash flow expenses.

After deducting 14 billion short-term lease liabilities, Haikong still has 38 billion lease liabilities, of which about 25 billion is Haifa’s cheap light charter fleet. There are only 13 billion long-term other leased assets, and this also includes large assets such as containers. Haikong is really cautious to the extreme.

Many companies increase production capacity during the boom, although the money is still on the books, but investment decisions have been made, and they will be forced to waste cash during the downturn, which will bring a burden on the balance sheet. This is indeed a lot of times. Many companies The reason for selling at the high point of the boom, but Haikong has no such worries at all.

Haikong’s current capital commitment mainly consists of two parts, one part is three batches of ships built by OOCL, but the total amount of these three batches of ships is not high, only 3.1 billion US dollars, which I am 100% sure is less than the future of OOIL The net operating cash flow in the two quarters is likely to be less than the increase in OOIL’s operating cash flow in the third quarter.

The capital commitment of the container shipping part is even less, and currently there are only 10 ships of COSCO Mercury. 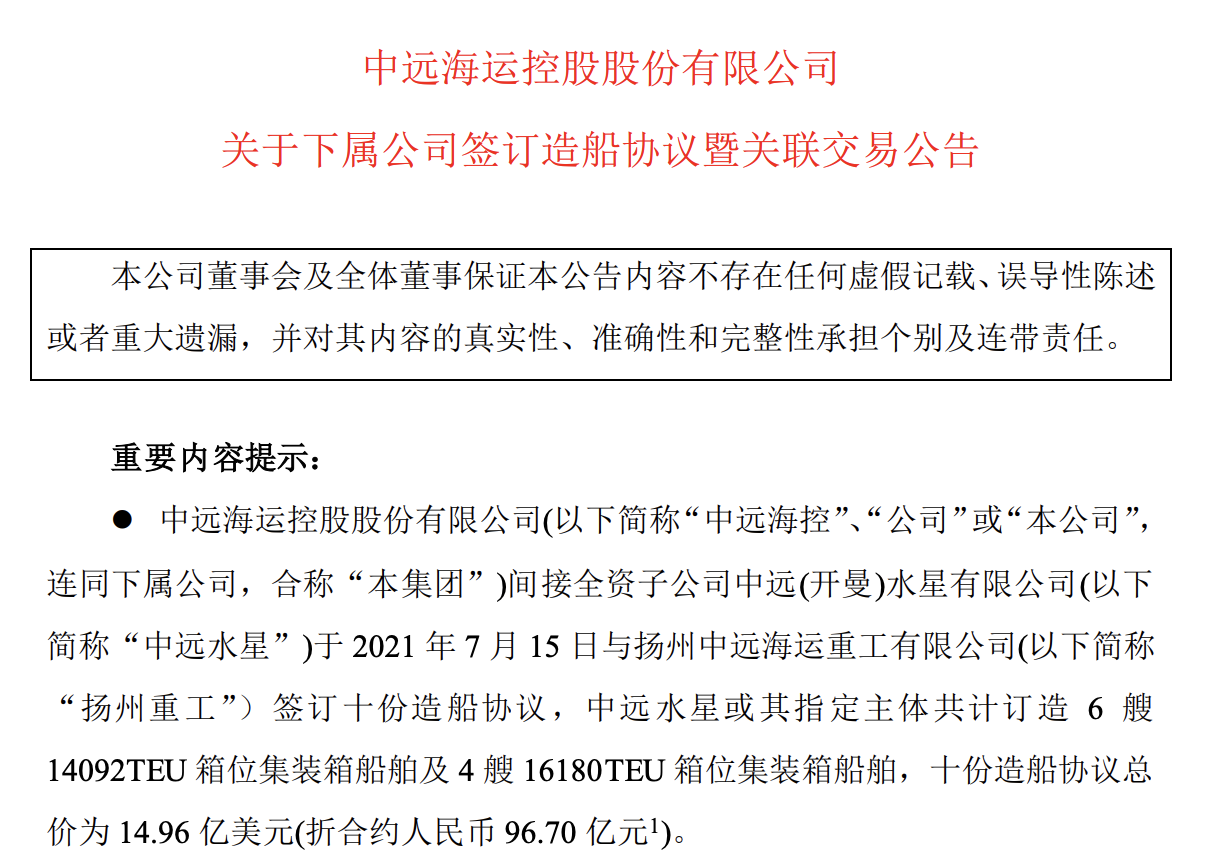 The combined capital commitment of overseas and container shipping does not exceed US$4.6 billion, which is definitely lower than the operating cash flow in the third quarter.

(3) Since the reorganization, the operating cash flow has been positive

It has been mentioned in the previous article that Haikong has always had the lowest cost per container in the past few years. We will push it forward for a few years and reorganize in 2016. Since the reorganization into a container shipping company, the company’s operating cash flow has continued. positive, there is no record of loss.

From 2016 to the present, it has managed the bankruptcy and reorganization of many container shipping companies. Haikong has always been able to ensure positive operating cash flow, and since Mr. Wan and the others started in 2017, they borrowed to manufacture a batch of large ships of more than 13,000TEU. , Since raising the level of equipment to the level of international first-tier giants, Haikong’s operating cash flow has continued to climb before the epidemic.

We look at the corporate value, no matter how high it is speculated, the ultimate long-term value still depends on how much value it can create for shareholders.

Taking Yingke as an example, Yingke’s accumulated free cash flow in the past five years has not exceeded 9 billion, which is lower than its current market value of 14.6 billion yuan after it has left the boom period.

However, for Haikong, the capital investment in the next two years will not exceed the operating cash flow in this quarter, and the company’s free cash flow is rapidly accumulating:

Compared with its peers, Haikong’s free cash flow performance from 2019 onwards (in 2018, it involved more than 30 billion investment in OOIL) is also better than other shipping companies including Maersk.

This is Maersk’s free cash flow (in RMB), and it includes other business sectors, not just the shipping sector. Their accumulated free cash flow since the outbreak is less than the current market value plus ex-weighted dividends. 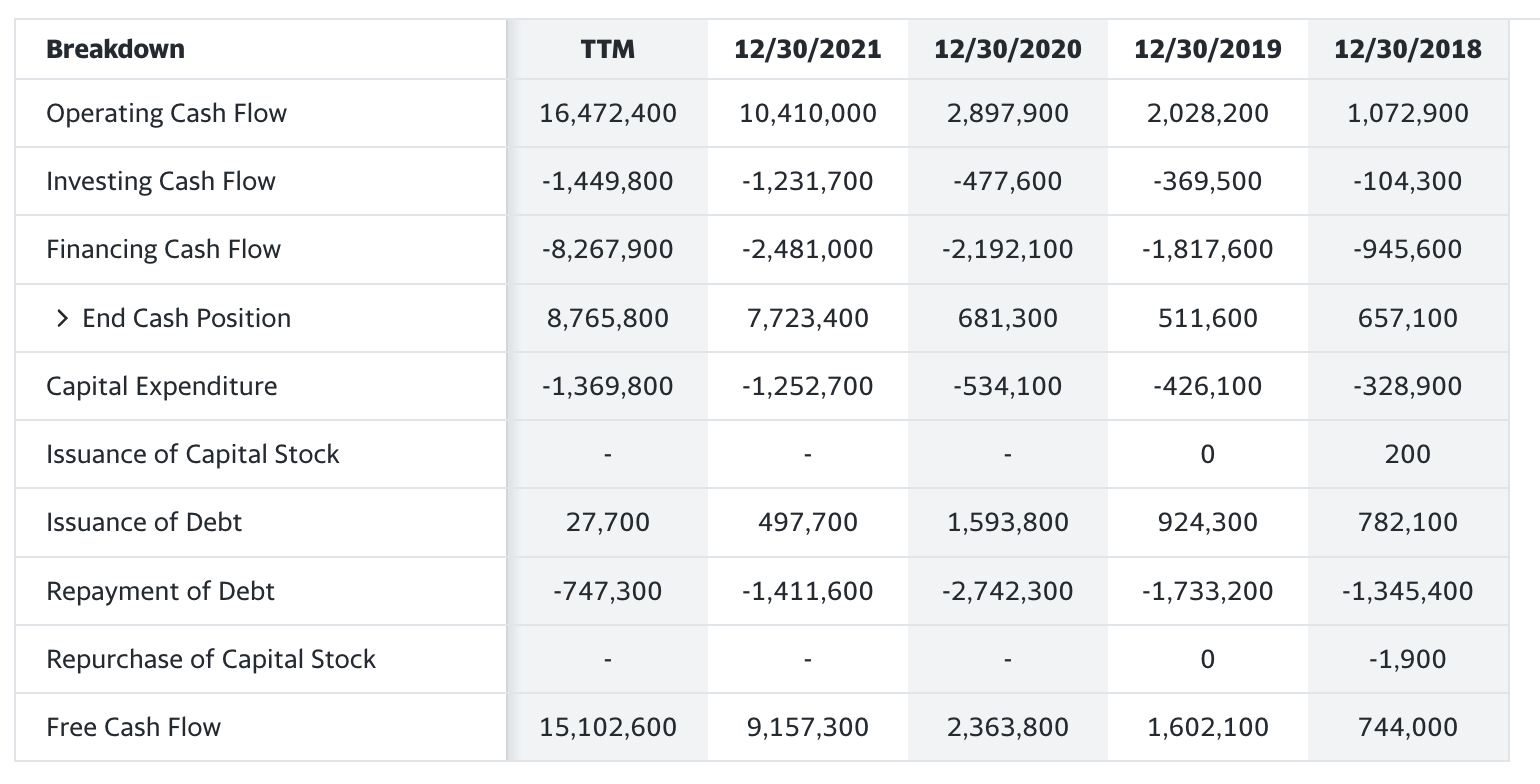 This is HLAG with a fleet size of 60% of Haikong, and its free cash flow is not half that of Haikong. Their accumulated free cash flow since the pandemic is less than 50% of the current market value plus ex-weighted dividends.

That is to say, whether it is analogous to other “famous” cyclical stock brothers, or the international container shipping giants in the same field, the absolute value of Haikong’s accumulated free cash flow and the relative value compared to the market value are at an unprecedented level. the degree of absence. In the final analysis, the value of an enterprise is equal to the accumulation of its earning ability. The money earned now has no discount rate , and in the future, there will be no large expenditure to spend this cash. The accumulation of free cash flow is gradually improving, and there is no risk of impairment in the future.

To sum up, in terms of EV value, performance, balance sheet, and free cash flow of cyclical stocks, Haikong does not have the shortcomings of other cyclical stocks. We believe that this is its super strong cash-generating ability. Smoothed out the shortcomings of various cyclical stocks. If his annual profit rises from 6 billion in 2019, to 10 billion in 20, and then to 20 billion in 21, you can say that he still has hundreds of billions in debt and tens of billions of capital commitments; but when he Using one quarter’s operating cash flow to pay off all interest-bearing liabilities , and using another quarter’s operating cash flow to build a ship that will be used in the next five years, continued excellent performance for 8 quarters and permanently solved his future. The financial difficulties he may encounter permanently increase the value of his business.

Some people cover their ears and say, I don’t listen, I don’t listen, the market is always right, and if it falls, there is a reason for it. But I would like to ask: If the market is always right, why are there countless outstanding companies in ancient and modern China and abroad whose stock prices fall to bankruptcy prices and then rise to the sky? Shouldn’t the market be quick to correct their mistakes when they drop a little bit? buy them back?

This topic has 184 discussions in Snowball, click to view.
Snowball is an investor’s social network, and smart investors are here.
Click to download Snowball mobile client http://xueqiu.com/xz ]]>