The stock price of New Oriental Online has continued to hit new highs since December 8, 2020. Today (September 2), the closing market value reached 34 billion Hong Kong dollars, an increase of 471% during the year. The optimism stems from high expectations for the prospects of New Oriental’s live broadcast business.

This week, New Oriental Online disclosed its first fiscal year report after the “double reduction” (the fiscal year ended May 31, 2022), with an adjusted profit of 110 million yuan. Dongfang Selection became popular after June 9, so it has limited impact on the report data.

According to a research report by Haitong Securities, since the launch in December 2021, the cumulative sales of Oriental Selection have been about 1.91 billion yuan, similar to the situation introduced by Yin Qiang. The third-party industry report shows that from August 12 to 26, the GMV of Dongfang Zhen’s self-operated products accounted for 34.5%, an increase of 7.7 percentage points from the previous 15-day statistical cycle. (Gong Fangyi and Chen Jing) When it comes to inflation — or rising prices — some companies shy away from it. Others see it as a sign of prosperity because their goods or services are also more expensive.

According to the monthly data from the National Bureau of Statistics, in the first half of this year, the “purchasing prices of major raw materials” in the Manufacturing Purchasing Managers’ Index (PMI) was above the boom line every month, reflecting the “expansion” of this part of the business. , that is, the price of raw materials. Meanwhile, PMI “factory prices” fell into contractionary territory in May and June after four months of expansion. 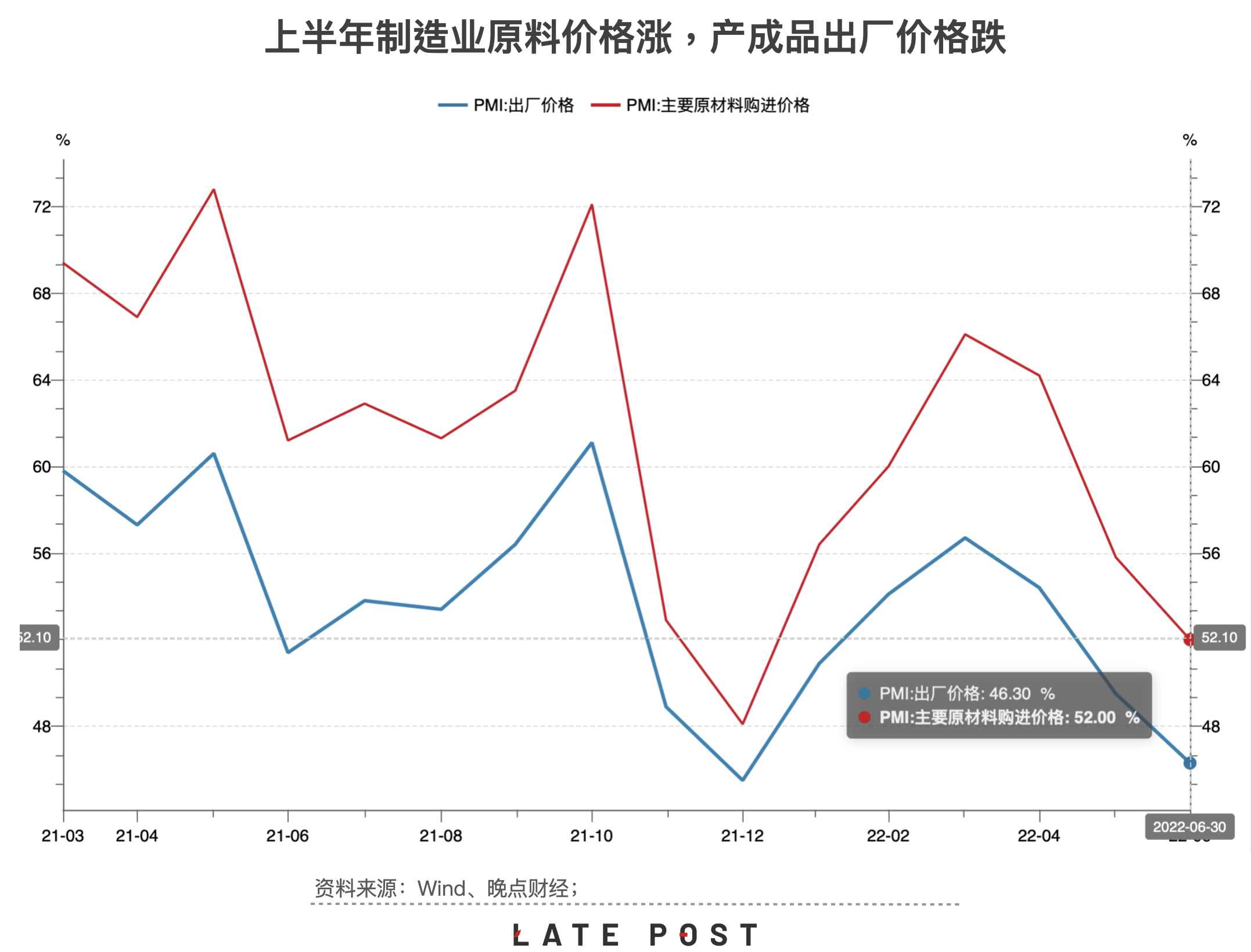 We also inquired about the changes in the profits of industrial enterprises published monthly by the Bureau of Statistics. In the first half of the year, the profits of typical upstream resource enterprises such as oil and natural gas exploration, coal mining, mining, and non-ferrous metal mining and processing increased significantly compared with the same period last year. However, the profits of the middle and downstream manufacturing industries such as food manufacturing, paper making, rubber and plastic products declined to varying degrees. 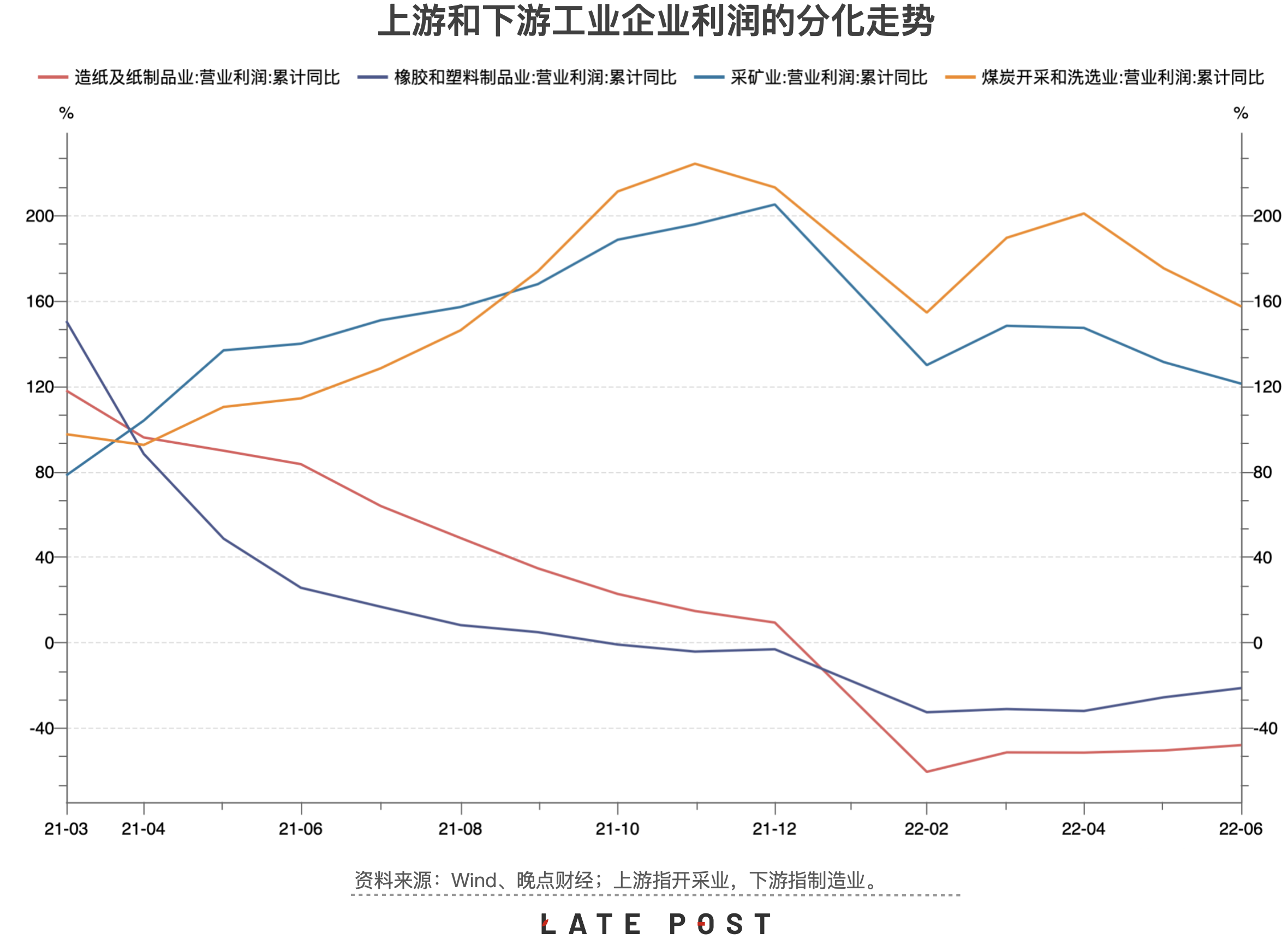 The recent interim reports disclosed by A-share companies also reflect the above trend, that is, the profits of companies that control raw materials have risen sharply, and mid- and downstream companies have “worked” for them . For example, the grain and oil giant Arowana wrote in its semi-annual report:

During the reporting period, affected by the repeated epidemics, the conflict between Russia and Ukraine, the energy crisis and other factors, the price of edible oil raw materials continued to run at a high level… The weak demand combined with the rising cost caused the profit space of edible oil processing enterprises to be double squeezed. unprecedented test. 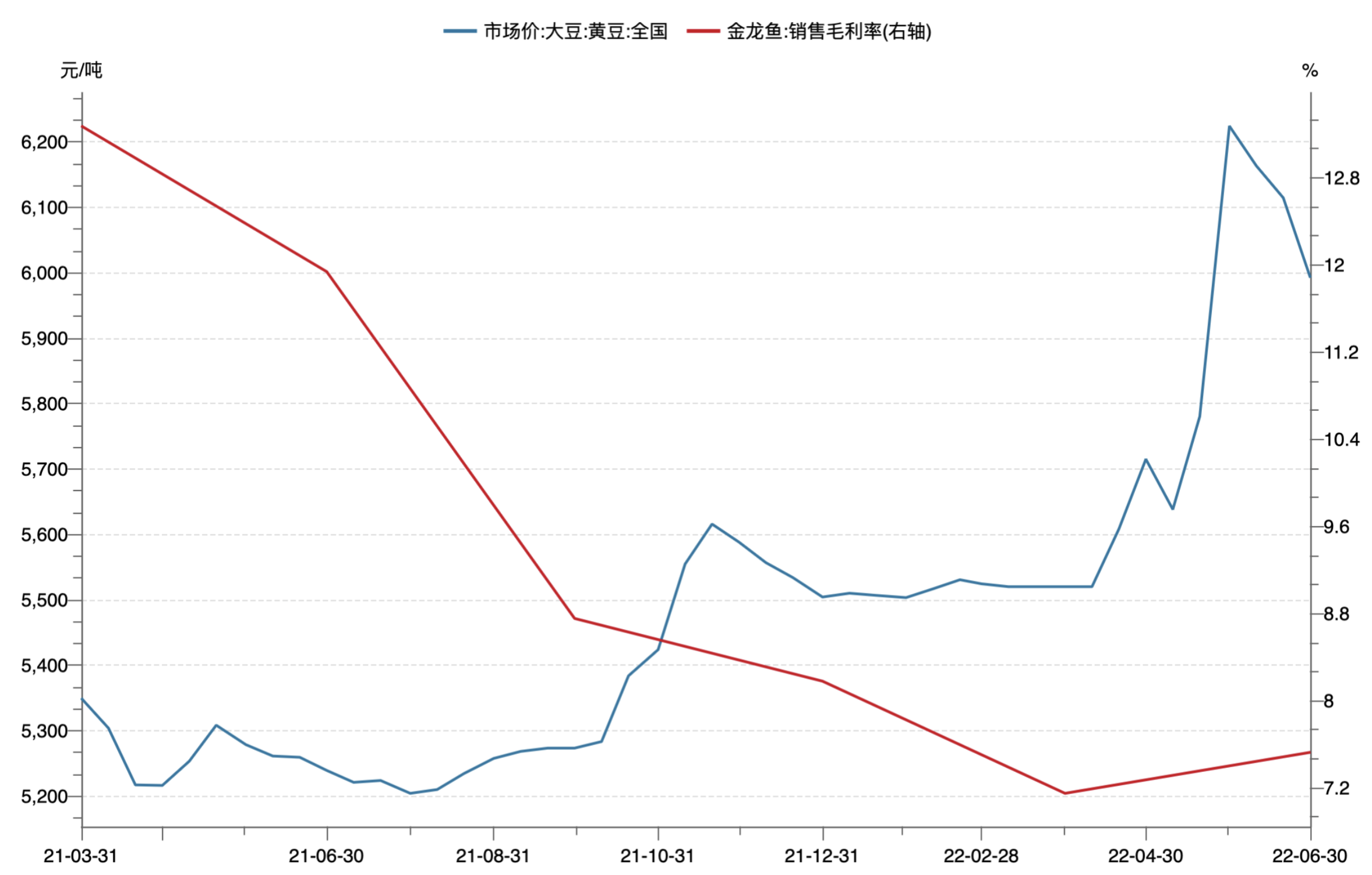 The development of lithium resources is the first link in the value chain of the lithium industry, and high-quality raw materials are a prerequisite for the company’s sustainable development… Benefiting from the global boom in new energy vehicles, lithium-ion battery manufacturers are accelerating capacity expansion, and orders for downstream cathode materials are picking up, etc. Influenced by a number of positive factors, during the reporting period, the sales volume and average selling price of the main lithium products produced by the company increased significantly compared with the same period of the previous year. 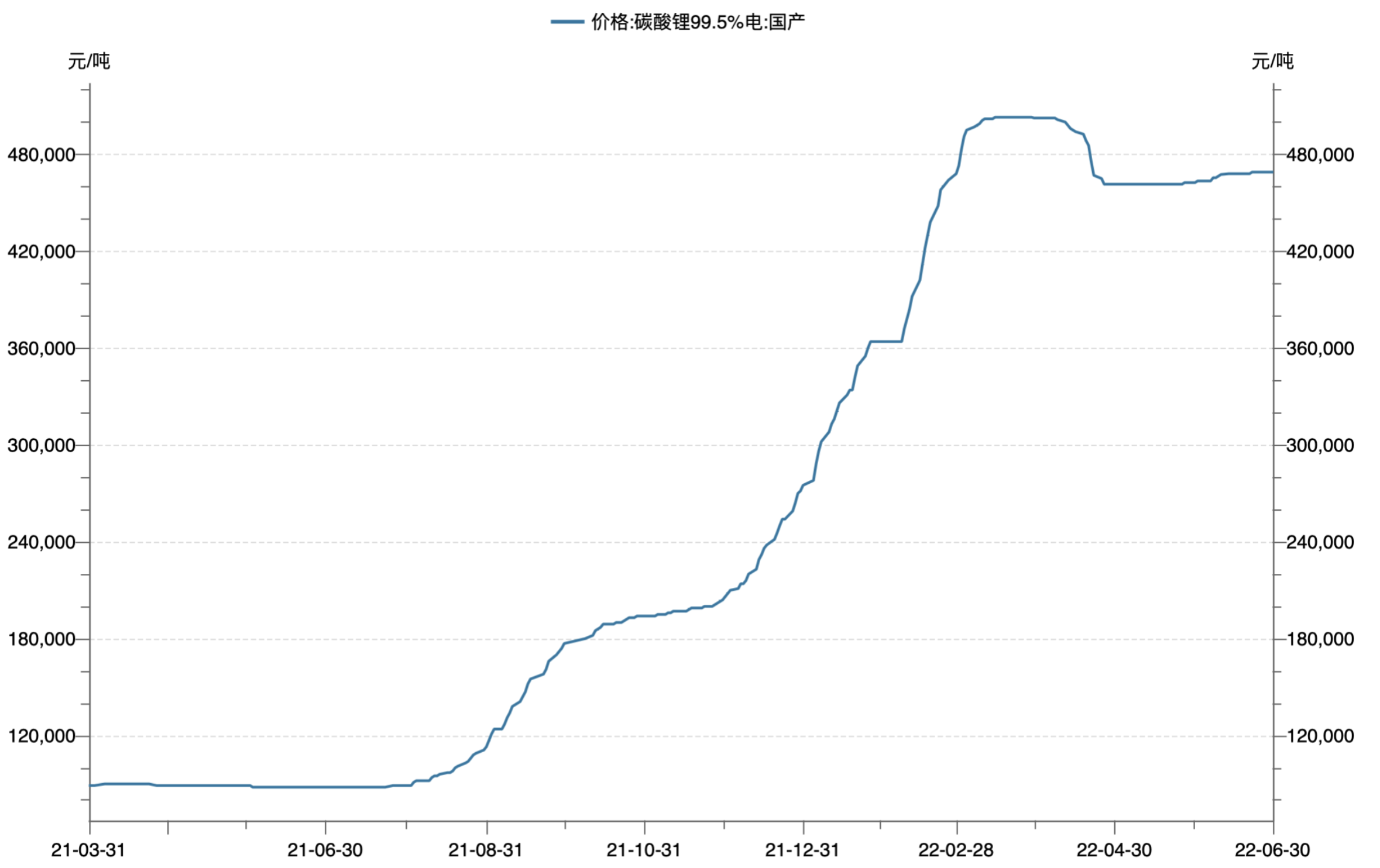 Tianqi Lithium also mentioned the risk of price adjustment. Maybe this is just the “format clause” of semi-annual reports and annual reports, but at least it brings out the changing laws of commodity supply and price cycles:

The price increase caused by the shortage of upstream raw material supply will directly put pressure on the production cost of downstream end products, which will lead to the destruction of demand, which may force the downstream side to seek alternatives and reduce the demand for lithium. Reduced demand will directly lead to lower product prices, and just as rising prices spur rapid ramp-up of capacity across the supply chain, falling product prices will also put pressure on producers from lithium concentrate mining to lithium compounds.

There is no permanent champion. (Gong Fangyi)

On September 1, Starbucks announced that it will appoint Laxman Narasimhan as CEO-designate on October 1 this year, reporting to interim CEO Howard Schultz. It is expected to officially become CEO and join the board of directors in April next year. Narasimhan is the outgoing CEO of FMCG giant Reckitt Benckiser.

According to the disclosed announcement, Narasimhan earned a base salary of $1.3 million per year during his tenure at Starbucks and is eligible to receive annual equity awards with a target value of $13.6 million starting in fiscal 2023. In addition, he will receive a replacement stock with a target value of $9.25 million as compensation for leaving Reckitt Benckiser.

Narasimhan, 55, has worked in the consumer industry for many years.

Schultz was to Starbucks what Jobs was to Apple.

Analysts likened Starbucks to Schultz’s own son, pointing out that Schultz wanted to be sure to find someone who was both capable and tough. It is expected that Schultz will be deeply involved in the next period of time, and major issues such as operational decisions will still be his home field.

At the second-quarter results meeting this year, Schultz said he would announce a detailed plan to reshape Starbucks on September 13. Narasimhan will deal with the multiple challenges of Starbucks’ American union, rising employee turnover and declining performance in the Chinese market . (Intern Zeng Xing)

CHART OF THE DAY丨August ideal sales halved year-on-year, BYD’s growth rate and sales are far ahead 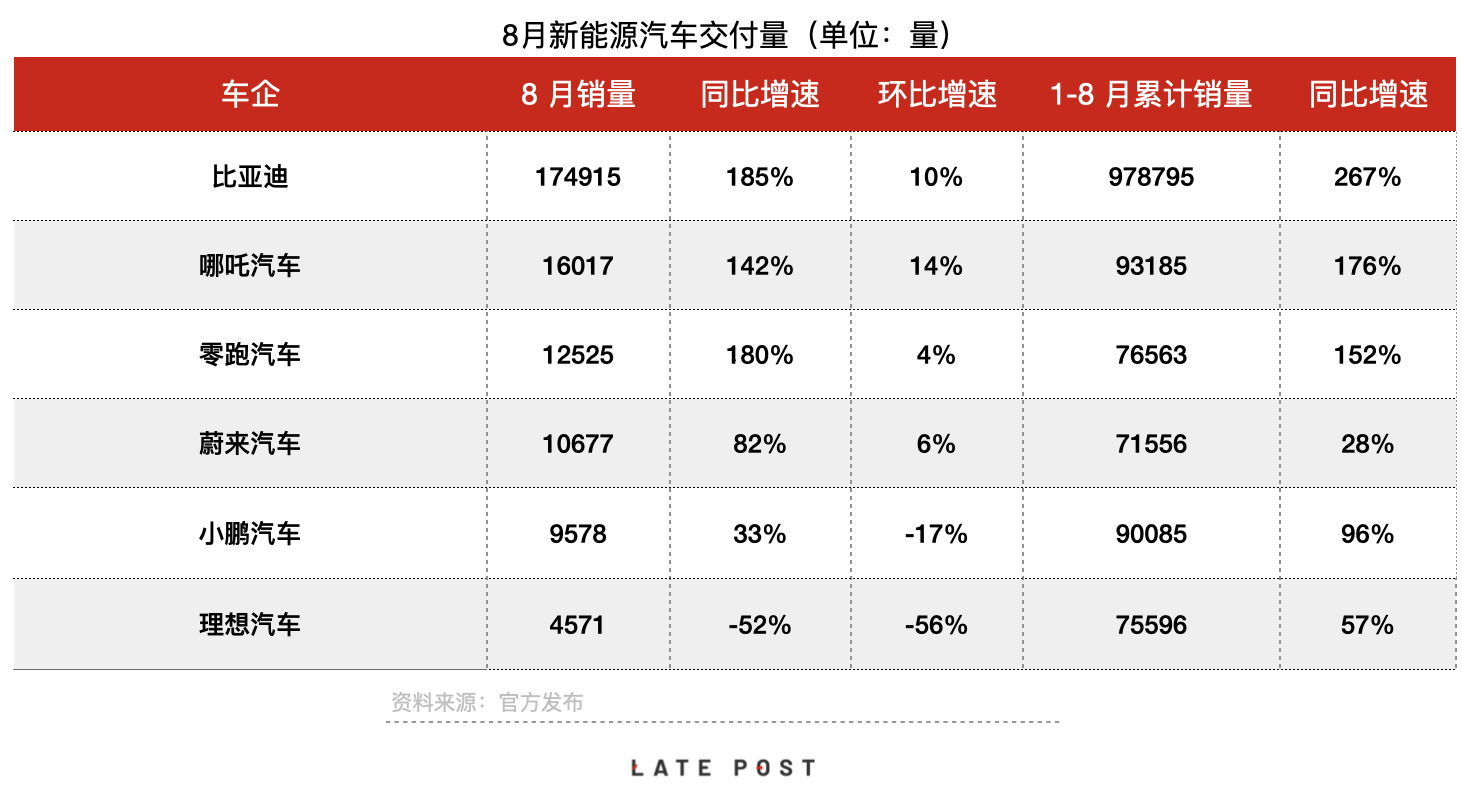 The parent companies of Momo and Tantan posted a net profit of 346 million yuan in the second quarter, down 25% year-on-year.

Zhiwen Group’s revenue and net profit both fell in the second quarter, and at the same time, paying users were lost. The poor performance is related to the decline in the revenue of the live broadcast business and the continuous loss of Tantan. In the second quarter, the revenue of live broadcast business was 1.52 billion yuan, a year-on-year decrease of 27.7%. Zhiwen’s two supporting businesses, Momo and Tantan, are facing the dilemma of declining revenue and difficulty in increasing paying users. In the second quarter, Momo had 8.6 million paid users and Tantan had 2.2 million paid users, both down year-on-year.

The advertising business was hit, and Weibo’s net profit fell by 65% ​​in the second quarter.

Weibo’s revenue in the second quarter was US$450 million, down 22% year-on-year; net profit was US$28.3 million, down 65.06% year-on-year. The decline in performance was mainly dragged down by the advertising business, which accounts for 85% of revenue. Advertising and marketing revenue in the second quarter was $386 million, down 23% year-on-year. The financial report stated that the repeated epidemics in major domestic cities and the upgrading of prevention and control measures have had a wide-ranging negative impact on the advertising industry. Blue cursor also fell 98.6% in net profit in the first half of the year due to the decline in advertising revenue.

McCafe replaces the latte with a “milk iron”.

Recently, McDonald’s Mccafe announced the launch of the “Milk Iron” series, which changed the extraction method and milk-to-coffee ratio of the original latte products, increasing the milk volume by about 30%. “Milk iron” will be used as the exclusive star product of McCafe, and latte will be completely removed from the shelves. McCafe expects to add about 1,000 stores next year, most of which are located in third-tier cities.

Amorepacific announced that it will acquire Natural Alchemy, the parent company of Tata Harper, as part of its strategy to enter the North American market. According to people familiar with the matter, Tata Harper values ​​Amorepacific’s R&D capabilities and global influence, especially in Asia. The acquisition is expected to close in the fourth quarter of this year.

Buffett once again reduced his holdings of BYD.

According to Hong Kong Stock Exchange documents, Berkshire Hathaway, a subsidiary of Buffett, reduced its holdings of BYD H shares by 1.716 million shares on September 1, and its shareholding ratio fell from 19.02% to 18.87%. Since August 24, Berkshire has reduced its holdings of BYD shares by a total of 11.579 million shares. In 2008, Buffett invested in BYD at HK$8 per share, and the profit from the reduction of shares has exceeded 30 times.

British regulator CMA, concerned that the merger of Microsoft and Activision Blizzard could have adverse effects on the industry, said in a statement issued on September 1 that the two companies need to submit acceptable remedies by September 8 or face a The second stage of in-depth investigation. At the end of November last year, the CMA rejected Meta’s acquisition of Giphy.

The report says Beijing has entered a moderately aging society.

The Medical Insurance Bureau asked for feedback, and 60% of the adults supported the price management of dental implants.

On September 2, the National Medical Insurance Bureau issued the “Notice on Carrying out Special Treatment of Oral Implantation Medical Service Fees and Consumables Prices (Draft for Comment)” for public comments. Among them, it is pointed out that about 60% of the feedback supports the implementation of special governance, and strongly reflects the problems of “astronomical charges” in the field of oral implantation, publicizing false subsidies, deceiving patients with low-priced advertisements, and buying and selling customers with “benefits”.

More than 900 cases have been reported in this round of epidemic in Chengdu.

Half of Americans use an iPhone.

As of the end of June this year, the iPhone accounted for more than 50% of U.S. smartphones for the first time, setting the highest share since the iPhone was launched in 2007. The Android phone camp led by Samsung and Lenovo divided the remaining market share. The above statistics are based on the smartphone users are using, including users who bought iPhones in the second-hand market and users who use older iPhones.

An episode of 400 million “The Lord of the Rings” has mixed reviews.

The “Lord of the Rings” invested by Amazon was launched today (September 2). This 8-episode drama invested a total of 3.2 billion yuan, making it the “most expensive drama in history”. Amazon has shown the first two episodes in advance in more than 200 theaters around the world, and the current reputation is mixed. Some film critics have fully affirmed the narrative style and production level in the play, and some film critics think this show is not shocking enough. , Dialogue cliché.

U.S. gasoline futures fell to their lowest levels since the outbreak of the Russia-Ukraine conflict. 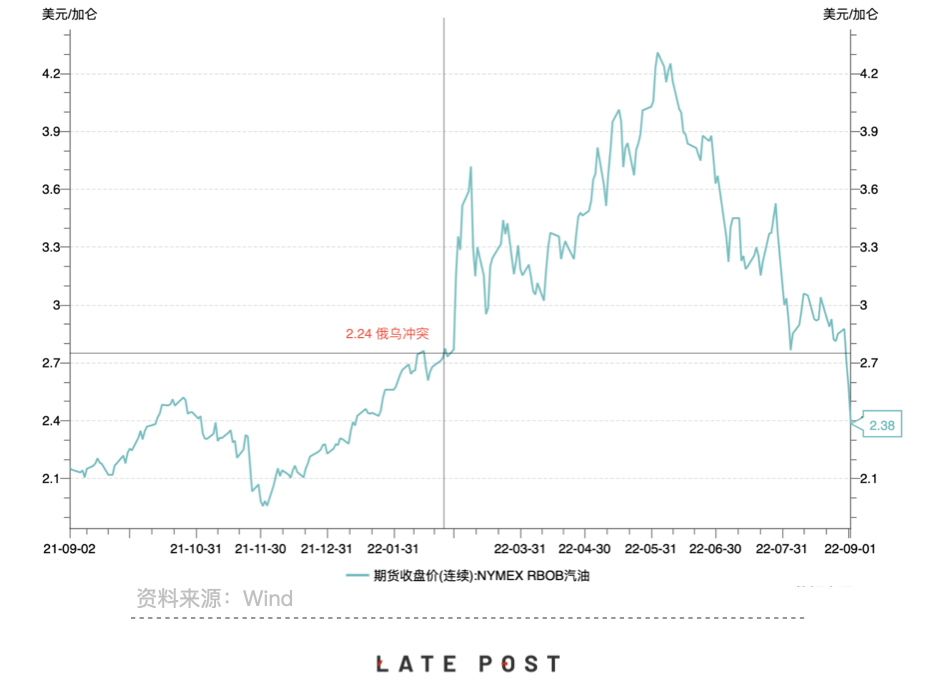 This article is reprinted from: https://www.latepost.com/news/dj_detail?id=1300
This site is for inclusion only, and the copyright belongs to the original author.