After I constantly adjusted my personality and overcome many psychological obstacles, I became more cheerful. So when I travel on a long train, I chat with the travelers around me. I have forgotten a lot of the stories I heard in the past. I will tell you the stories that are still in my memory later. I will first record a recent trip.

In July 2022, on the way home, the second train I took was a long-distance train. Near my bunk, I chatted with a few strangers who also sat from start to finish.

A is a 72-year-old man, talking about his past, calmly and calmly. At the age of 15, their father died of illness, and their mother raised their siblings alone. At the age of 18, he bravely resisted the shackles of his hometown’s “Parents are here, not far away”, he left home to join the army, the army is thousands of kilometers away in a large city in the Northeast. After changing jobs, he was placed in a state-owned enterprise in a county under the big city, where he later married a wife and had children.

In the 1960s and 1970s, a large number of people from the Northeast were called to participate in the production of steel used for military aircraft, missiles and other materials, and came to the 420 factory (it seems to be the name, I will change it when the correct name is confirmed). He asked me, “Have you heard of Factory 420?” I replied, “I think the name is very familiar.” That’s right, the in-laws of a colleague next to me were the workers of Factory 420, and their hometown is in a big city. Subordinate to a county. A said, “We had a lot of people going back then, and I went there for a while.” A also told me that there are also many workers in several surrounding cities who are going south with their families.

Before A retired, with the mighty inflation, the salary had risen to more than 3,000 yuan per month. With nearly 40 years of working experience, his monthly pension is about two thousand seven hundred (lowercase: 2700). B next to A asked A: Is more than 2,000 enough? A said: “My wife still has two thousand and three quarters in a month, and the two together add five thousand and one point, which is enough.”

After A left 420 and returned to the Northeast, he took his mother to live with him. A said: “I see some young people who don’t want to be with the elderly. The elderly are very annoying when they go to their homes, and they don’t want to communicate with the elderly about anything. I know they have their own ideas and there are some problems in the family, but I I was willing to be with the old man, so I took the initiative to bring the old mother over. The neighbor next to me asked: ‘Would you like to be at the house of the uncle (note: the uncle, also called the master of the aunt, referring to the son-in-law) or the son’s house?’ The old mother said: ‘ It’s better for my son.'”

A said: “My old mother has just passed away for three years, and I am almost 70 years old. I can’t do my own work anymore, and I am still taking care of my 90-year-old old mother. My mother passed away three years ago and is buried here (Note : refers to the place where he made his home in the Northeast).”

B: Housewife who has settled in other provinces for 15 years

My conversation with B is basically at the same time as I communicate with A, C, and D.

In my memory, the first sentence I had with B was about buying train tickets. This year, I found that the 12306 official website has adjusted its ticketing strategy, and people under the age of 60 basically have no chance to buy the lower bunk. Due to some injuries on both feet, I am worried that it will affect the force of the feet, so I want to buy a lower bunk. I once registered 3 12306 accounts with my own and my parents’ ID cards, and with the assistance of others, I used 4 accounts at different times in two days to purchase tickets more than 20 times. When there were about 200 remaining tickets, I finally Buy a middle shop. B told me that she bought the ticket at the window of the train station and could choose the bunk, so she bought the lower bunk.

B’s cognition is a typical manifestation of “survivor bias”.

B said: “My son graduated with a major in architecture (note: the scientific name should be called “civil engineering”). He used to work in Shenyang for a number of bureaus with China Railway, and his annual income was only 50,000 yuan. I also went to China Railway, and I can get 150,000 a year.”

When chatting with other people around, B said: “I have been here for 15 years, and I feel that the climate here is okay. Is it as hot as you say? My skin has improved.” C, D next to it Hearing B say this, he responded, “We can’t do it. It’s so hot here, we can’t stand it on the construction site.”

C and D should be brothers, but it is not clear whether they are real brothers or cousins. They were born in Meihekou, traveled from south to north, spread all over the country, and even went to the frontier and Hainan. Now that he is over sixty years old, he is still struggling on the construction site.

They said that the reason for going south to work is due to different factors: construction is possible in the south throughout the year, and income is available every month; the wages paid to workers in the south are much higher than those in the northeast, as long as they can endure 13 to 14 hours of hard work every day If you work hard and can endure the rather harsh living environment on the construction site, you can earn 100,000 yuan a year, which is mainly used for various expenses for children to go to school, buy a house, get married, and grandchildren. D said to A: “How many young people do not eat the old now? Basically, they have to rely on the old to buy them a house and a car!”

When C and D went to work in the two autonomous regions of the northwest frontier, they also took the train.

Don’t ask why you don’t fly, please understand the bitterness of the bottom workers.

When we talked about people working at heights, we said that they have high incomes, with a daily income of at least 300 yuan and a maximum of 500 yuan, but their risks are high. B said, their ropes are thick, right? D said: “Their ropes are as thick as thumbs and fingers, but the baskets below tend to be fragile, and I have seen people fall from them!”

C and D have been contacting others on the phone, and they are also consulting us, asking which bus station to take the bus to Meihekou.

E and C and D did not know each other, and had a brief exchange with me when eating at the small table next to our bunk. E is from a county under Dandong. Due to the epidemic in Dandong, all passenger vehicles to the urban area of ​​Dandong and the counties under Dandong have been suspended. The price of black cars has risen from more than 100 yuan to 300 yuan, but they can only travel to counties that have not been affected by the epidemic, and cannot reach downtown Dandong.

E advised me to go back to my hometown to find a job. E said: “Are your parents quite old? Can you come back in time if you have a disease or something? How can you support them so far away? It’s impossible to find a job at home, right? My parents are here, so I don’t travel far.” I said : “You must have a way, they know where I am, it’s still not easy to find a decent job at home, and the income is really too low…” A said: “Many young people in the northeast have gone to the south, and they all see Not many young people…”.

The common reason why C, D, and E returned to their hometowns was that the sultry weather with high temperature and high humidity seriously affected their work on the construction site.

“Uncle, how much is your lunch box?”

Maybe it’s because the hair is too sparse, and he is called uncle by F. But I’m only in my thirties. “Is this lunch too expensive?”

In January 2022, I will take the high-speed rail back to my hometown. There are two sets of lunch boxes of 50 yuan and 60 yuan. I asked the conductor: “I don’t want a set meal, just how much is the lunch box?” So I bought a box of 40 yuan “Braised Meat Covered” meal”. The firm rice, the numerous mushroom spikes, and the meager bit of meat make it stand out. There is no taste, not even salty, is it trying to make me feel “the plain is the truth”? 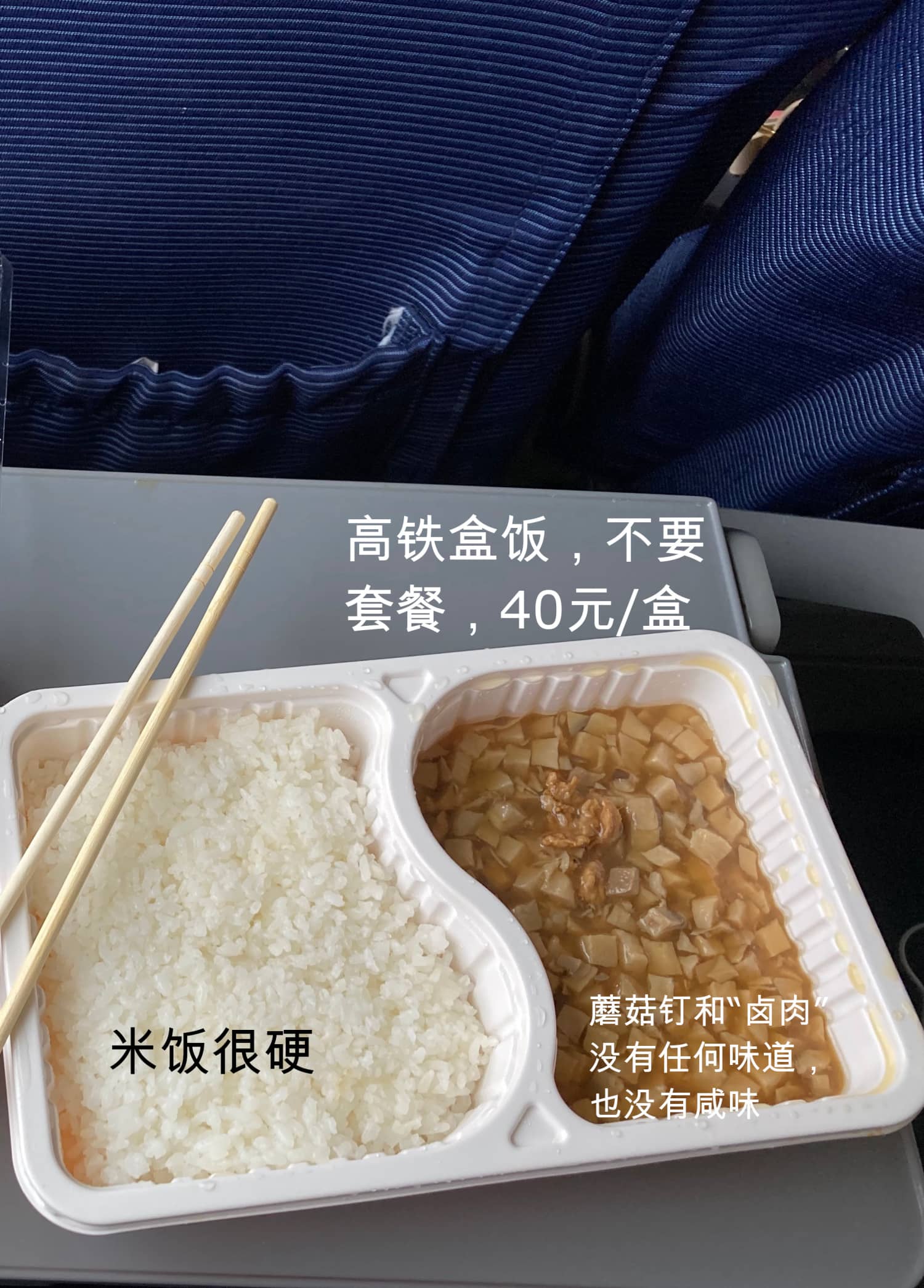 For other trains (red car, blue car, and white car, all of which have been painted green at present), the price of the lunch box has now risen to 25 yuan (the box lunch in the BSP 25T car is 40 yuan). Each meal is a different dish. Both meat and vegetables, with delicious Northeast rice, are quite cost-effective compared to high-speed rail lunches. 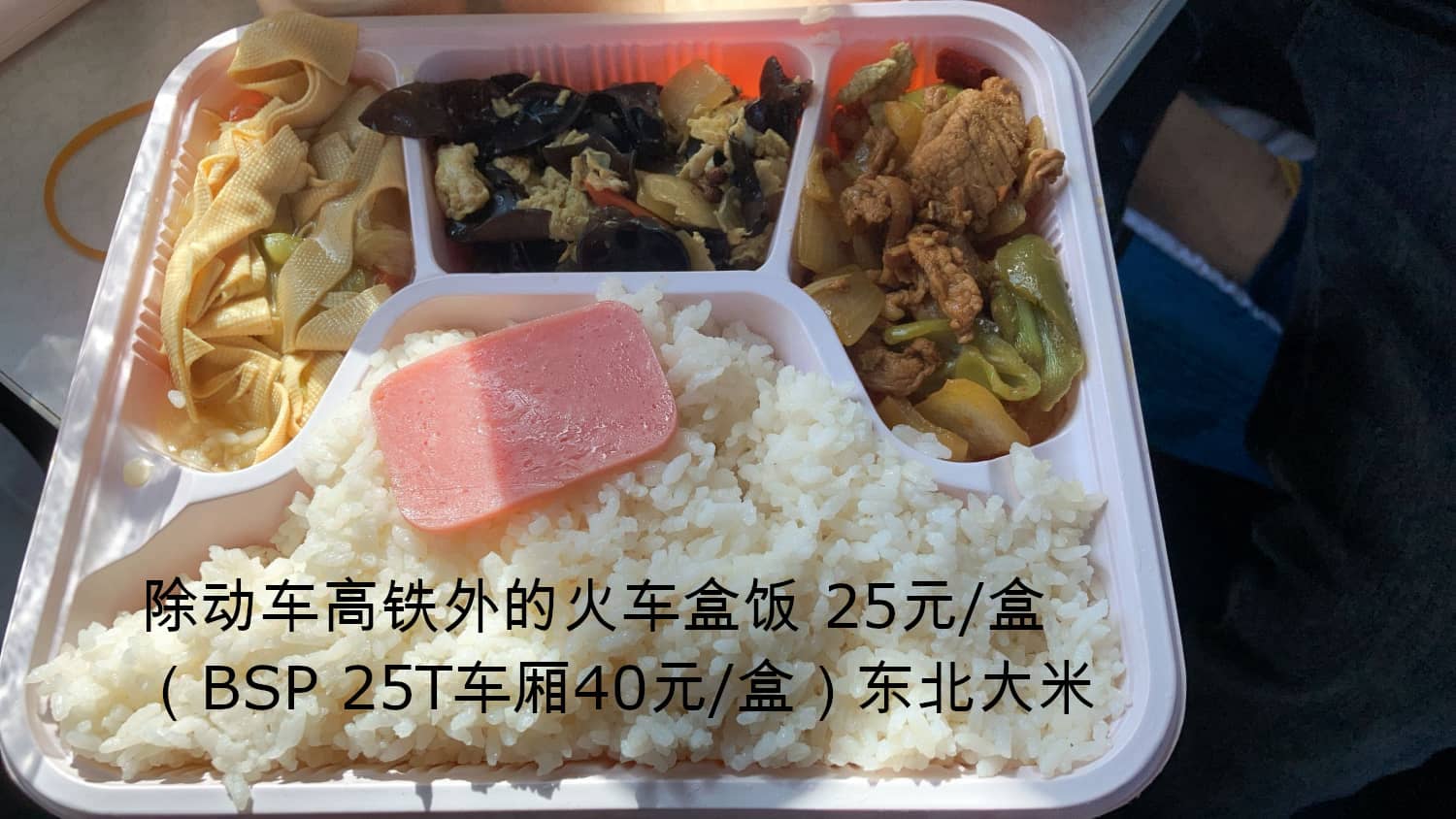 F told me about some things about their school, most of which are recognizable and cannot be written in a blog post, I only recorded the laboratory safety problems they encountered.

F’s major also has a lot of experiments to do. Because many reagents are toxic and corrosive, experiments are risky. F has experienced strong corrosive reagents splashed on the glasses during the experiment, the lenses were broken, a small amount of reagents entered the eyes, and returned to normal after treatment. The scary thing is that some classmates will not be so lucky and become blind.

I asked F: “Are you going to graduate school?”

“I plan to postgraduate entrance exams across majors, and I don’t want to be in this industry anymore.”

“Are you going to apply for the exam near home?”

F said that, considering various reasons, he still did not want to go so far, and wanted to take the postgraduate entrance examination of the provincial university.

After getting off the train, F needs to transfer another train and another car.

These passengers I have communicated with, like me, sat from the start to the end. In fact, less than one-fifth of the berth of the entire carriage was dropped off halfway.

Get out of the car and probably never see you again.

This article is reproduced from: https://lhcy.org/archives/185.html
This site is for inclusion only, and the copyright belongs to the original author.