From Shanghai to Beijing, it was a completely unexpected transfer,
It can be regarded as the benefit of participating in the technical community, generating problems through learning,
Get to know high-level people through asking questions, and prove your ability through projects, so as to get the opportunity to enter a higher platform…

The starting point of ability at that time:

The most impressive thing about leaving Shanghai is not saying goodbye to various social relations, but:

After having a credit card, according to the SMS notification, only the minimum repayment amount is paid every month,
I felt that I took advantage of it, and when I wanted to clear the account and leave, I told him to pay off all the debts in the past.
As a result, when people arrived in Beijing, they only had 2,000 yuan on them, so they had to live in a middle school classmate’s house first;

After all, SINA is a big company with a relatively complete system. Although there is no canteen, the salary is higher than that of Shanghai.
At that time, consumption in Beijing was not as magical as it is now, and after it stabilized, the pace of life returned to something similar to Shanghai;

The old classmate’s home was near the airport, and the SINA Building was in the west of the North Fourth Ring Road.
You can drive to the east of the North Fourth Ring Road every morning. It costs more than 40 yuan to take a taxi at night. The bus only arrives at 22:00.
The first two months were very tiring. Later, the department manager met a sister in the ski forum and rented out a single room in his own unit.
Just in the Guoan Family Community, just a quarter of an hour away from the SINA Building, bicycles, and canteens…

Of course, after starting to participate in community management, weekends are generally spent on community activities/organization/participation/…;

The direct leader of HD who recruited me is "波仔" , a returnee who understands FLOSS /free and open source software very well,
It is very supportive for HD to improve the ease of a single machine and reduce the overall cost by deeply customizing the FreeBSD system.
HD is also the founder of the Woodpecker Python technical community, and his group of small partners are also dug through various technical communities.
At that time, the mail technology department was probably the most geek department within SINA ;

Because the technology is not enough, it is assigned to the process improvement team, responsible for sorting out the development process, supporting the process support system,
Gradually improve development efficiency (to this day, it can be considered as an organization similar to the “endogenous” management committee);

In addition to sorting out a series of development specifications and monitoring the implementation before and after:

However, the biggest change should be from a one-way beneficiary of open source resources to a conscious and active contributor;

One of the biggest inflection points occurred during a document profiling:

Deep regret for my past “I’m proud, I use pirated” behavior… Start action:

Wow, the world opens up at once with extraordinary clues;
In the past, the way to collect such key web pages was to use the IE -specific integrated web page format .mht,
However, it is not friendly to manage more and more web pages in the form of local directories, not to mention having to use a dedicated browser to open them;
This problem was later solved by bookmarking, but it was found that the website did not exist permanently, and many disappeared from the Internet soon;

So, dig the plug-ins of FireFox, and finally locate a magical work: ScrapBook,
You can grab the web page locally, and build a tree directory inside the browser for easy reference at any time;

It is further found that the local webpages that are crawled are actually directories one by one, the index.html of each directory is the original webpage, and the others are the corresponding online resources of the webpage.
That is to say, Scrapbook is based on the original function of the browser, after the content analysis and layout of the web page is completed,
Save all its resources locally, and correspondingly modify all links to local relative paths, so that nearly 100% of the web page content can be restored locally, instead of relying on the network to download every time;

So I wrote a conversion script in Python to convert the index data formed locally in Scrapbook (that is, XML , which is unfamiliar by chance) into a standard html index page,
Then, you can share to your own website:

After a few iterations it becomes this: 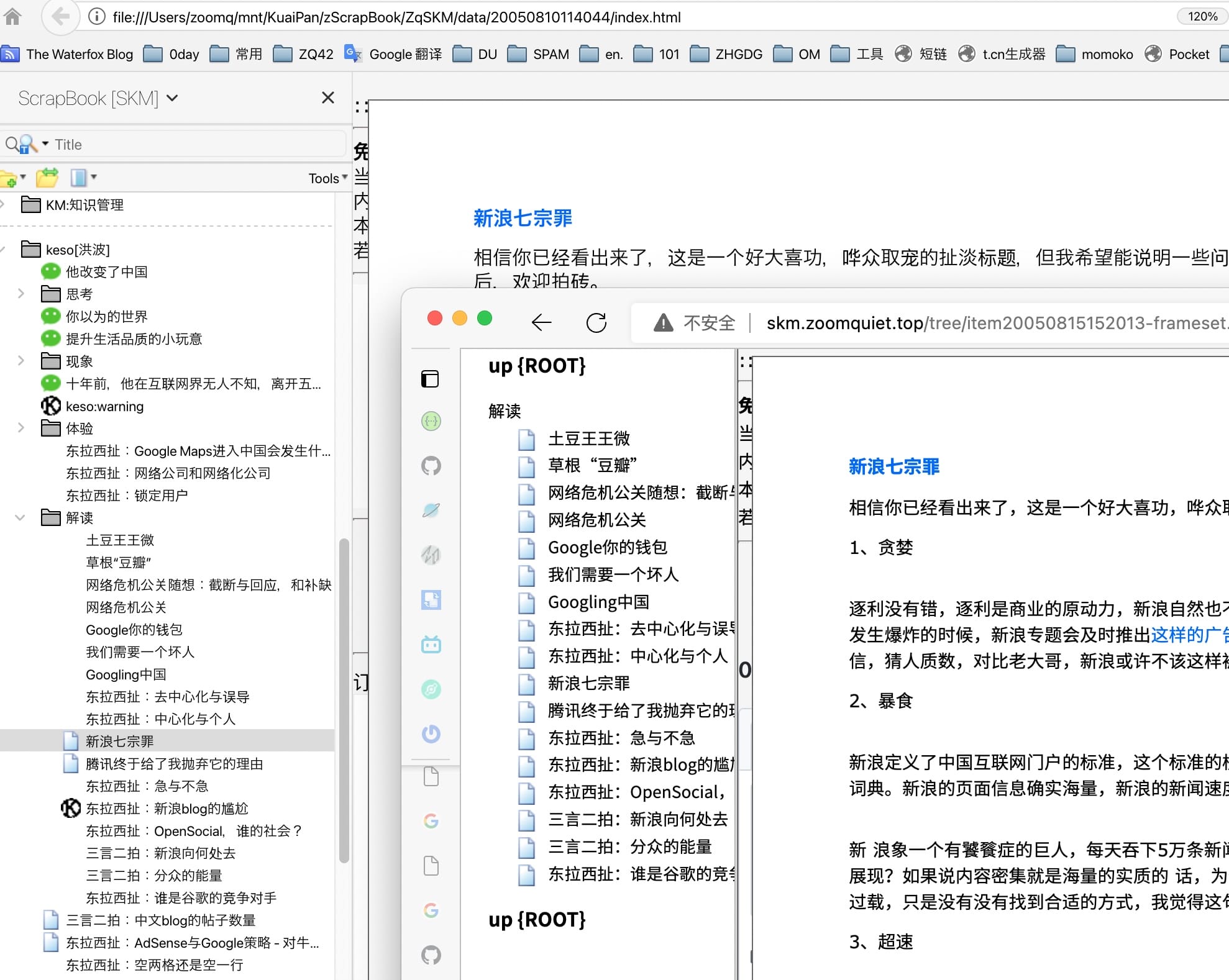 In this way, you can share the original data of web pages that you have collected that you think are reliable;

Beijing, after all, is the center of China’s Internet, and there are always many resources/conferences/communities, but I didn’t feel that I had the opportunity to enter;

The change started with the creation of CPUG ,
As I said before, the Woodpecker Python technical community founded by HD is based on his privately registered woodpecker.org.cn domain name.
However, after all, HD also serves as the director of a key department of SINA , and usually does not have much time to participate in community activities.
After establishing the main form of using the SINA top-floor conference room to conduct offline technology sharing activities on weekends,
Basically, I come to organize regularly,
After a few times, everyone felt that the name啄木鸟has little to do with Python,
It is proposed to learn BLUG /Beijing Linux User Group and create a special community to organize everyone to learn/practice/promote Python technology;

Yes, the proposer is a member of the exoweb.com company that sponsors the mailing list service,
This company was founded by foreigners, the founder Bai Xiong, and also the founder of BLUG白熊
Later, in various global technical activities, I can see this comrade白熊from time to time;

2005.7.30 CPUG and BPUG inaugural meeting
After that, *PUG communities in other cities were also established one after another,
However, only the user group in Beijing can maintain an offline会课(conference + course) activity once a month;
During my stay in Beijing, I organized 40+ sessions before and after, using this as a clue to connect various community software/works/activities/characters;

For example: CPUG sixth time. Douban development status
It was A Bei’s propaganda on Douban,
It was also in September 2005, during a meeting, that everyone knew that this website was developed with full-stack Python technology.
Register now to experience, it can almost be said that Douban’s official offline release in China is in the BPUG class;
Therefore, everyone’s Douban ID is very reliable;
For example, I am the 30th registered member of Douban, which can be proved from the ID serial number of the avatar of Douban account: https://ift.tt/w1NnS3Q

At that time, due to the difficulty of producing evidence, after consulting relevant legal personnel, the above had to be abandoned;
However, the online book collaboration process/toolchain/experience formed in the process,
Instead, it becomes community knowledge,
It was further transformed into other original books later,
Example: Lovely Python (2009)
Book Project in: ObpLovelyPython – Woodpecker Wiki for CPUG

Also: CPUG 4th Beijing Normal University Class
It is through the meeting that the teacher Zhuang Xiuli, who is engaged in the research of Internet adult education, was attracted and invited to share:

Through Zhuang Xiuli, I got to know Mao Xianghui/Issca Mao, who hosted the CBC /China Blog Conference, came into contact with open content/network ideas, and also held online conference discussions.

For example, WeKnow-050226-Isaac ,
Later, as a community consultant, he helped Mr. Zhuang to establish an educational discovery community/sociallearnlab.org;

I also met Uncle Keso from Issac Mao, and his regular 5g salon in his home:
(Because the location is fixed in Room 8-5g, Area B, Modern Broad Park, so, the name 5g is not the 5g of the communication protocol) 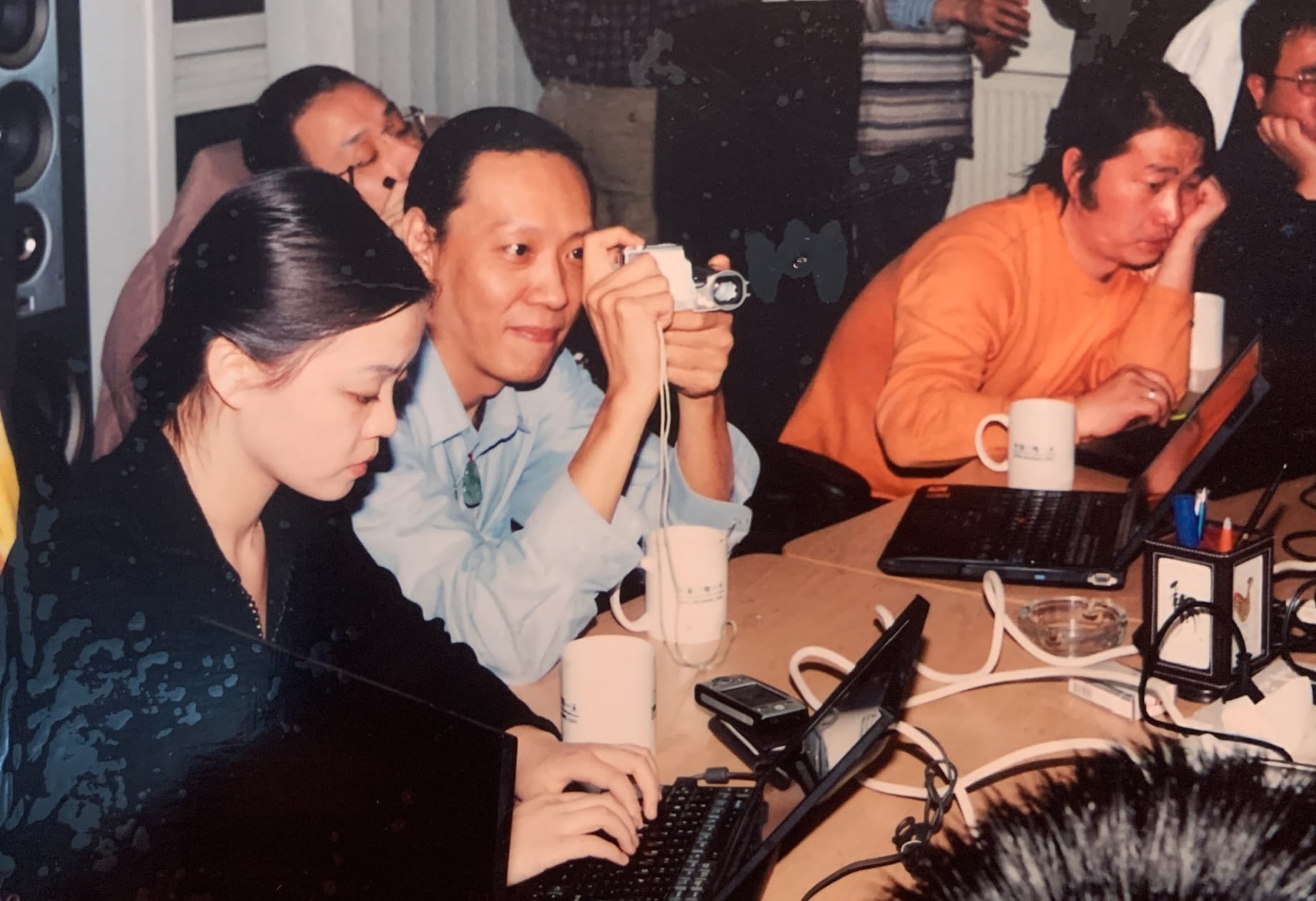 There is also the Ubuntu 6.10 release party known from the meeting 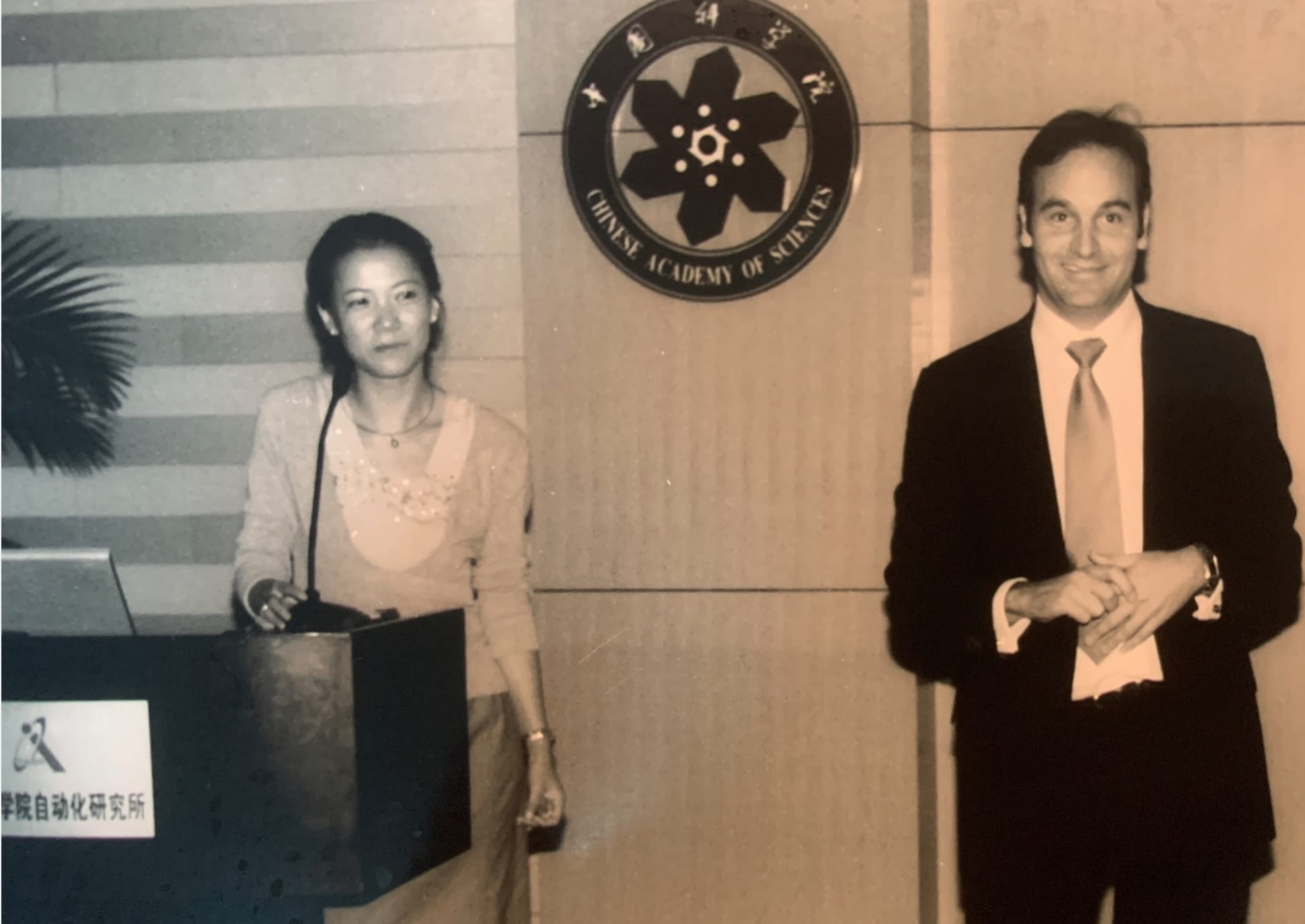 Of course, meeting the living dad is indispensable: 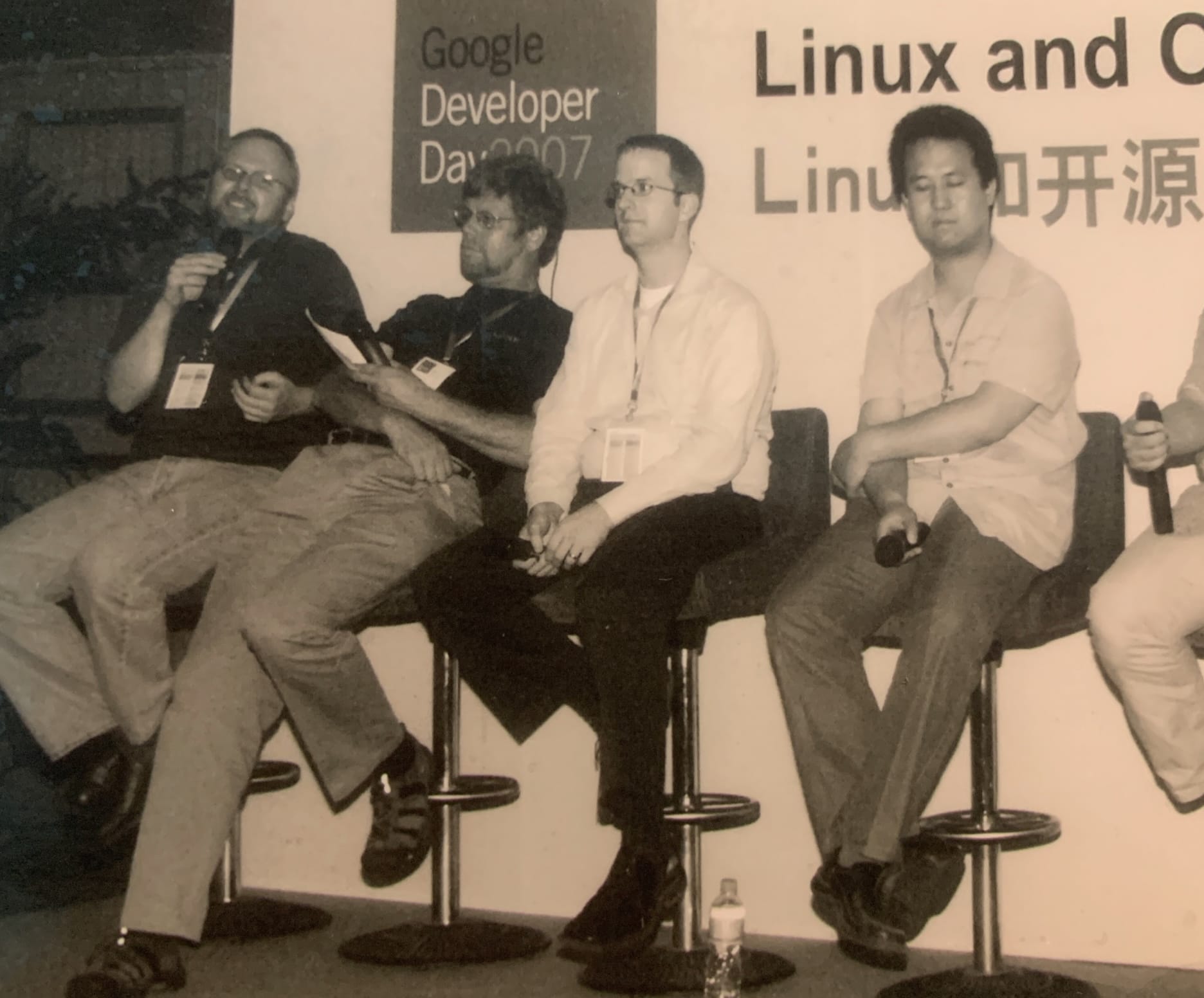 In 2007, GDD /Google Develop Day Beijing field, I saw my father for the first time, 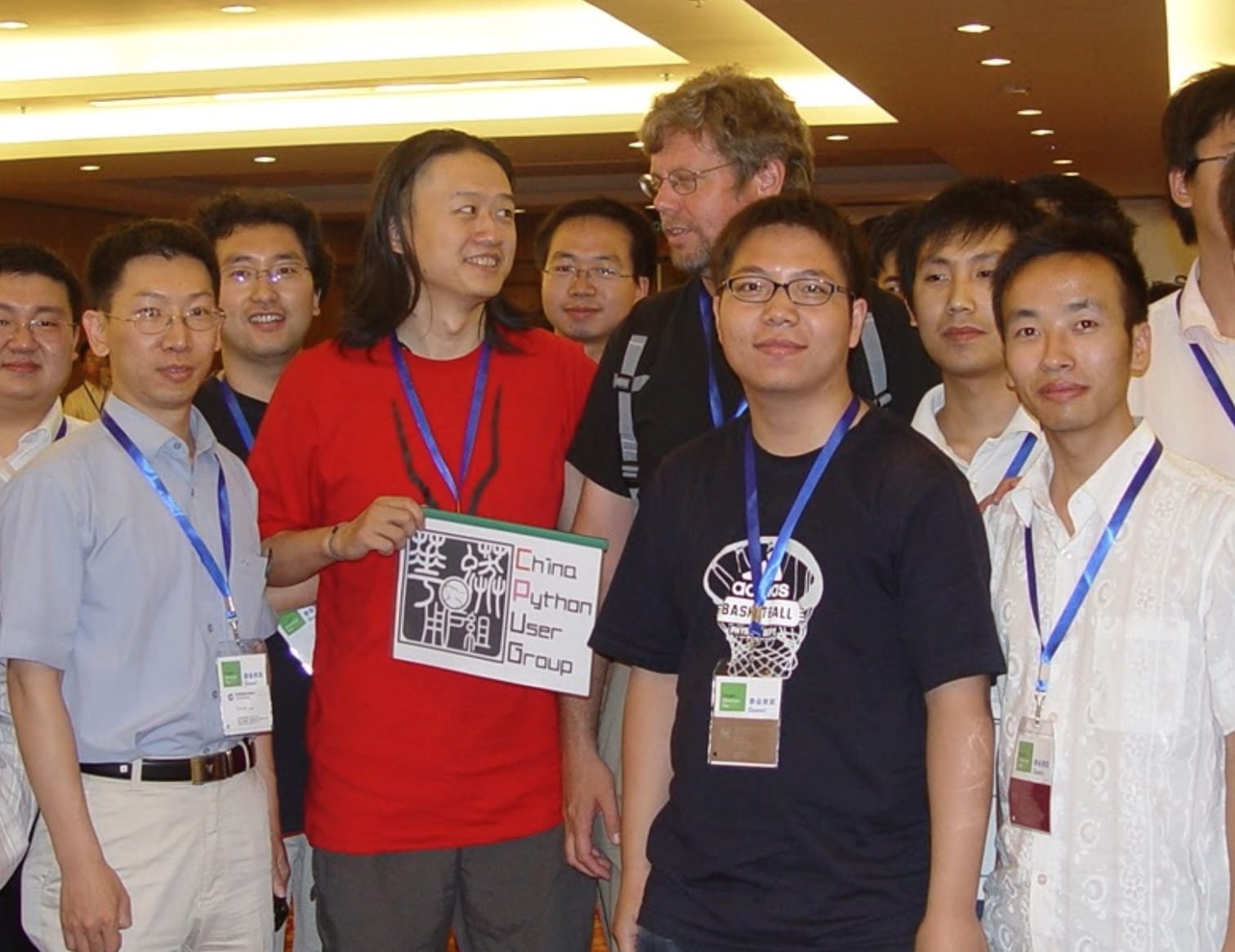 (Of course, there is a group photo, guess who is the aunt?

PS : The front row on the left of the CPUG logo is Limodou )

Of course, the most exciting thing is to see the RMS deity:
with RMS

Only then did I know that my colleague徐继哲/Bill Xu is a senior GNU community member,
Has been responsible for the docking of various activities of RMS in China,
This time, another long-term participation community is triggered again, which is the “philosophical community” ;
It is a free software culture publicity community founded by徐继哲,
When I went online, I exported 8000+ subscription mailboxes from the CPUG community list, imported data, and helped complete the cold start of the community….

The platform is really important, and after entering the platform, it is even more important to keep learning/active and continue to improve;

In Beijing, based on a stable job and rich local social resources,
As a member of the FLOSS /free, open source technology community, three main threads are slowly formed:

In every direction, new topics/problems/tasks/knowledge/skills/…,
All need continuous practice, and more people to join/collaborate/co-create/…

I feel like I’m running out of time, what should I do?

Next: Open source life record. 3. The beginning of GTD

This article is reproduced from: https://blog.zoomquiet.io/220820-flossstyle-2.html
This site is for inclusion only, and the copyright belongs to the original author.