PostHog (hereinafter referred to as PH) is a data analysis tool. In short, it is a substitute for Google Analytics (referred to as GA). There are many similar products on the market, and there are also some open source free products. In fact, PostHog is also a It is an open source product, and it is still very young. The company was only established in January 2020. The MVP version was launched 4 weeks later. In April of that year, it received a seed round of $3M, and the number of users in May already reached 1,000. , in December of the same year, it got the A round of $9M, and in June 2021, it got the B round of $15M. A total of 30 people in the whole company are distributed in 12 different countries. It has to be said that it is a fast growing company. Now PH’s customers have included large factories such as SpaceX and Airbus.

GA currently has two versions, the old version of UA (Universal Analytic) is the previous generation, there are many built-in reports, but the data model is based on Session, all events must use the format defined by UA. The latest generation of GA4 bases the model on events, and the event-based data model is more flexible. You can add custom parameters to events for more flexible analysis. However, because GA4 is still relatively “young”, the built-in template is relatively UA is basically disabled, and many reports need to rely on Data Studio to create. And whether it is UA or GA4, the tracking of back-end events is very complicated. The API of GA4 is not stable yet, which means that it cannot be used in the production environment. While I believe GA4 must be the future, give Google some time to prepare.

Compared with GA, PH is simpler and can completely customize the data model. Unlike GA, all Events are bound to a User, and PH must also be bound to a Person (equivalent to User). In addition to this In addition, 5 different types of Groups can be bound. Group is another way to organize Person, especially in ToB software, Account (personal account) usually belongs to an Organization (enterprise account), this kind of nested account system is almost insoluble in GA, And PH is a good solution to this problem. That’s why we finally chose PH. It’s surprising that Google, as a big SaaS company, can’t make a SaaS-friendly data analysis tool.

Event-based PH has made a lot of extensions in analysis. In GA, you need to maintain a GSheet yourself to record which events are sent to GA, and what are the parameters. PH comes with a Data Management function, which will automatically analyze all events and parameters sent to PH, and present them all. You can also add descriptions to events to record when events are triggered and what they are used for. Each property inside will also display a sample. 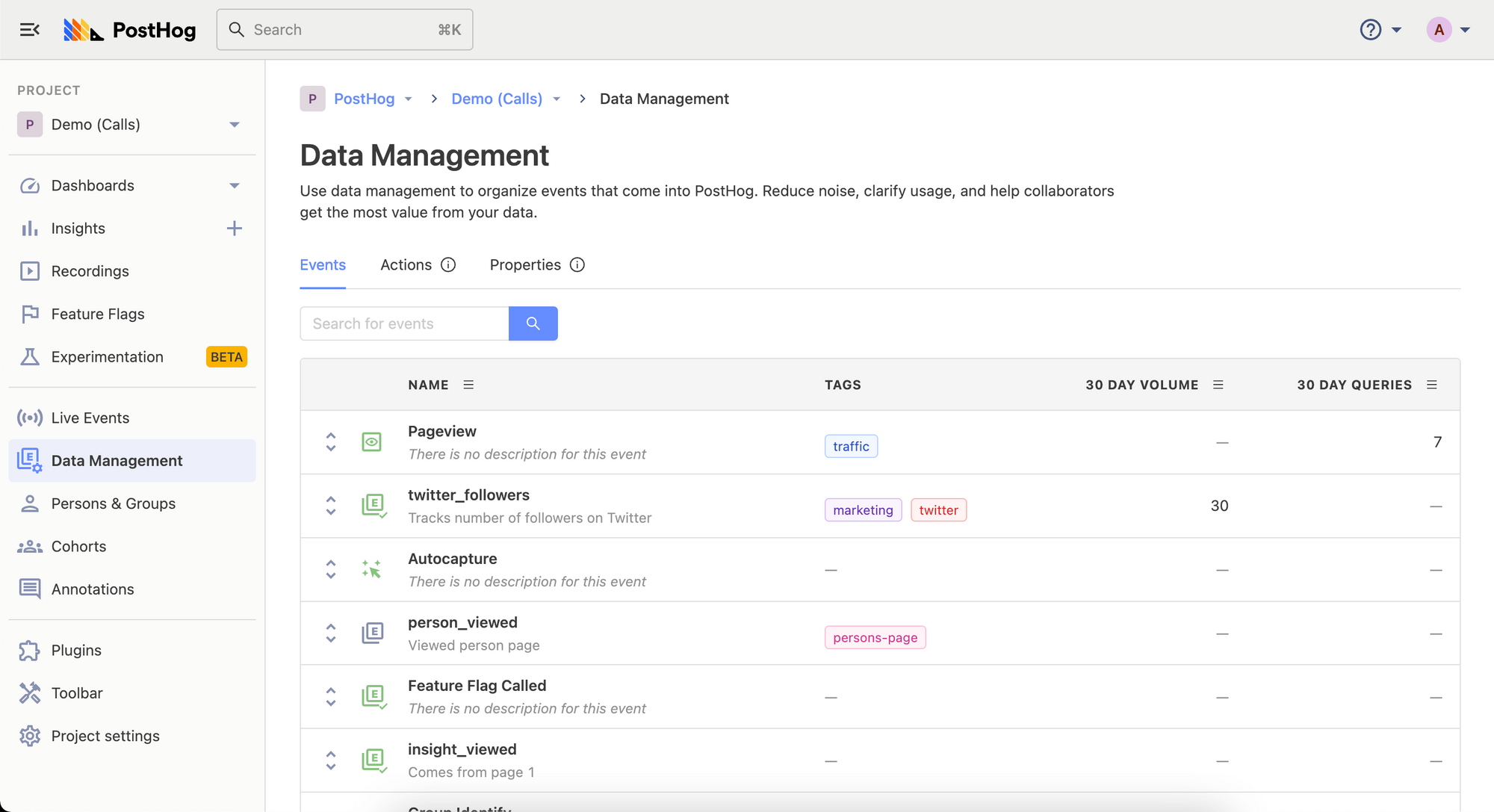 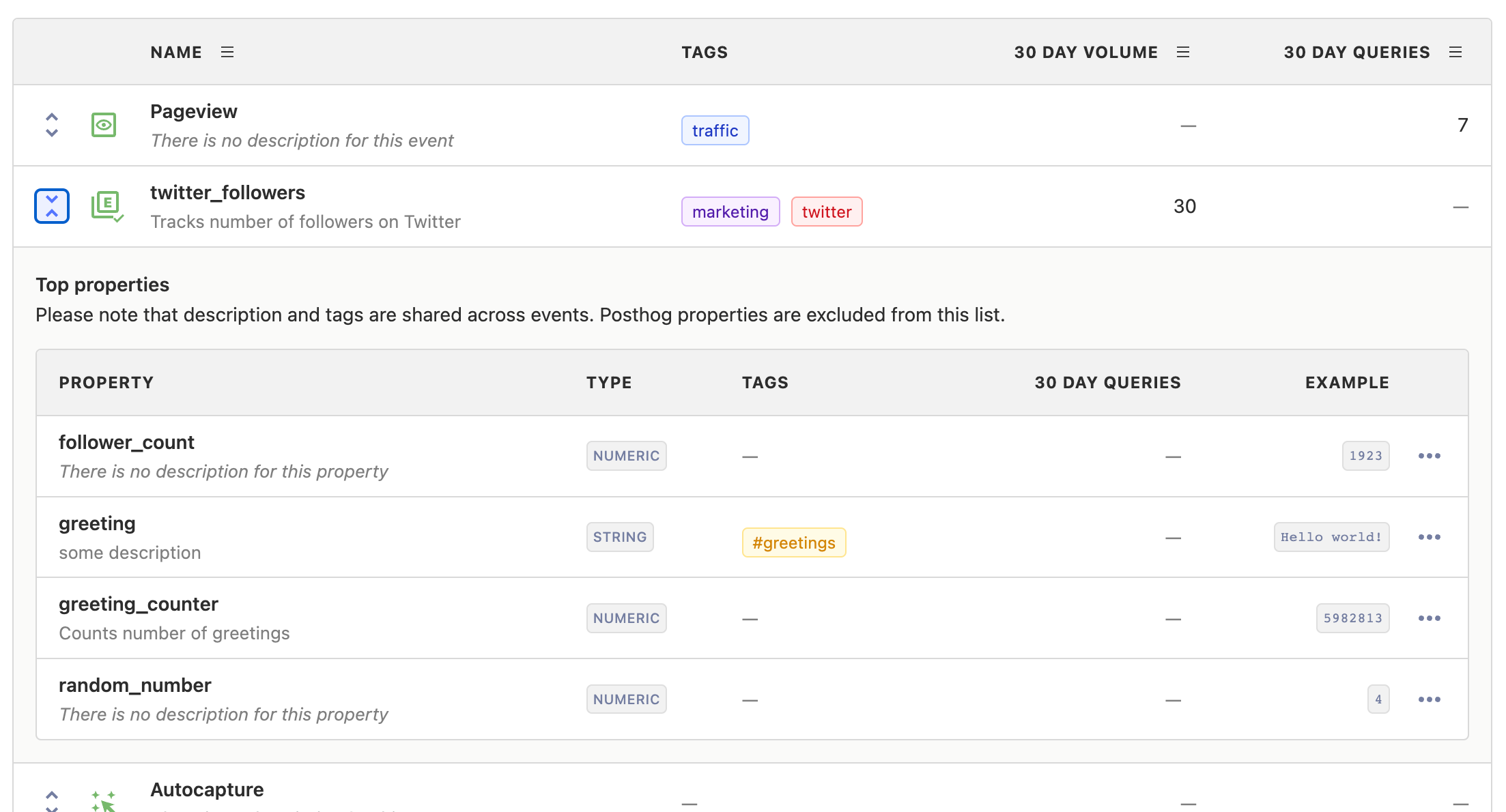 PH’s reports are also very powerful. The most commonly used one is Funnel. GA is also very poor at this. Although GA can be associated with the powerful Data Studio, the cost of getting started with the latter is too high. PH’s Funnel can look at both the conversion rate and the time required for conversion, which is very helpful for measuring the TTV (Time to Value) indicator in user experience. 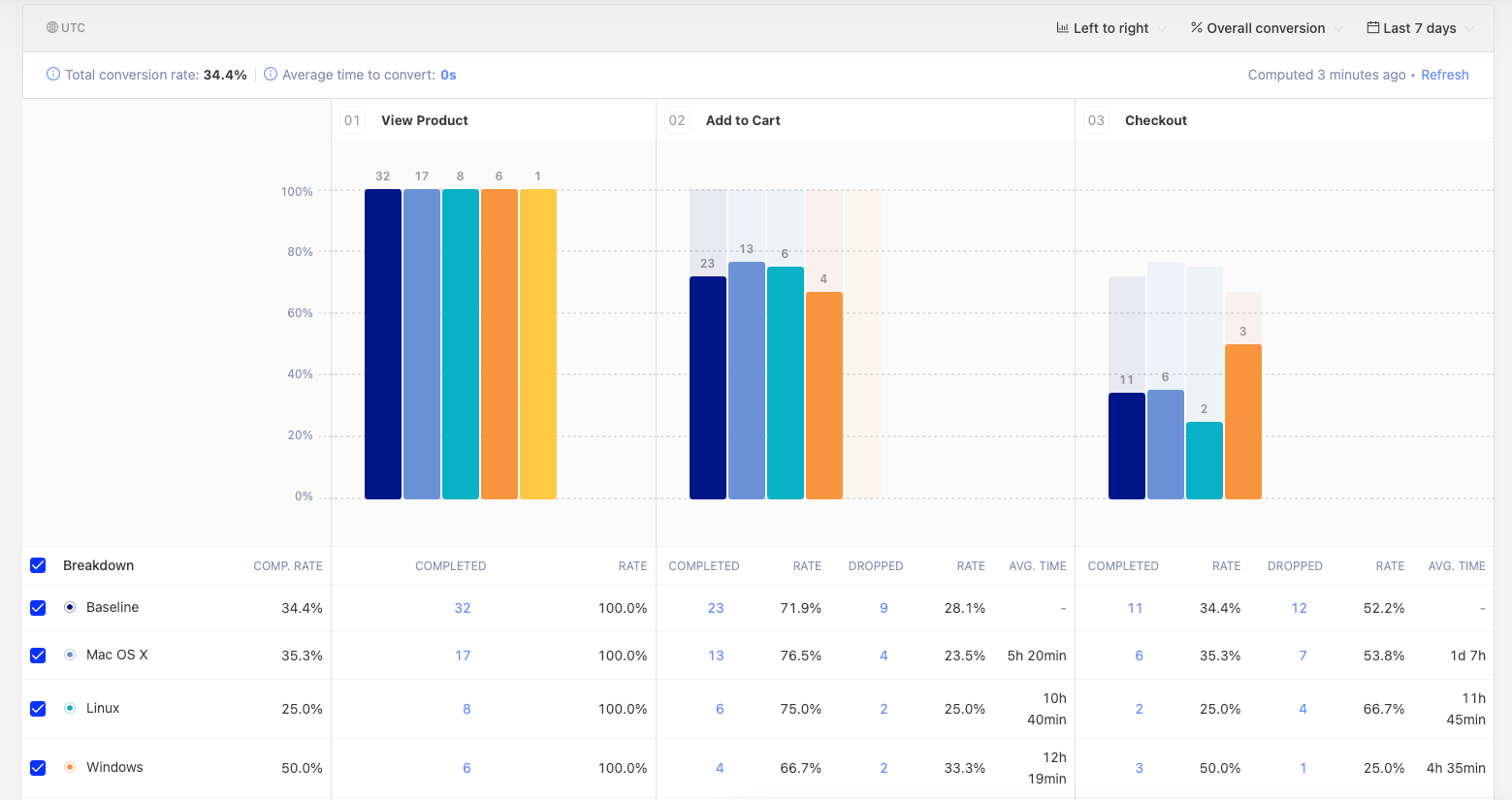 PH has built-in grayscale publishing and AB testing tools. You can determine that some users set Feature flags for them. Businesses can turn on and off corresponding functions according to users’ Feature flags, or enter different experimental groups. Although Google’s suite also has Optimize to do AB testing, but the cost of getting started is still too high.

There are two strategies for PH’s charging. The most basic one is based on the number of events (quota). The first 1 million events per month are free, which is enough for small and medium customers. The more the number of each month, the more expensive the fee will be. The charging standard for the number of events is gradient, similar to the tax. The larger the number, the lower the fee.

Since it is an open source product, you can actually deploy a privatized PH yourself. You don’t necessarily need to buy the Cloud version, but even if it is a privatized deployment, you still need to purchase a license to use advanced functions. However, the cost of our own deployment was too high. After we tried again, we finally chose to give up. The service of SRE was still unstable after tossing for a long time. Basically, most of the open source software is also discussed in this way. RedHat was also the same at the beginning. RedHat’s system is also open source, but the deployment cost is extremely high. Unless you have the ability and are willing to spend time researching, most users will still choose buy their services.

For open source software, open source is actually a way to attract users, and users can try products at a very low cost, especially for products like PH. If you go to Freemium or Free trial of traditional SaaS products, the latter is almost impossible. line, because the inheritance of data itself takes a lot of events, unless the trial period is set long enough. And open source is actually a trial version with an infinite period, because he believes that you will eventually buy the Cloud version. Freemium is actually a free model for the first 1 million events. Obviously, these are for small and medium-sized enterprises and start-ups. These companies have no money to buy more expensive services. If the volume is slightly larger, they may directly use GA. After all, the latter is currently Still free. GA4 has not yet launched a paid package, but combined with the GA360 model, it should also be charged according to the amount of events, but the threshold for GA events is very high, and some medium-sized enterprises are actually enough. After all, GA360 is still more expensive than PH. A lot of.

PH also has two functions that I use less frequently, one is Sesson recording, and the other is Heatmap. The former can “record” to record how users use the product, and the latter can see the user on a certain page. Which area gets the most clicks. Hotjar also has a similar function, but we chose Microsoft Clarity earlier. Clarity is also open source , but there is no need for Self-host at all. MSFT also announced that this product is free forever. Obviously MSFT hopes to go GA the most. The starting model, by attracting users to get more website data for free. 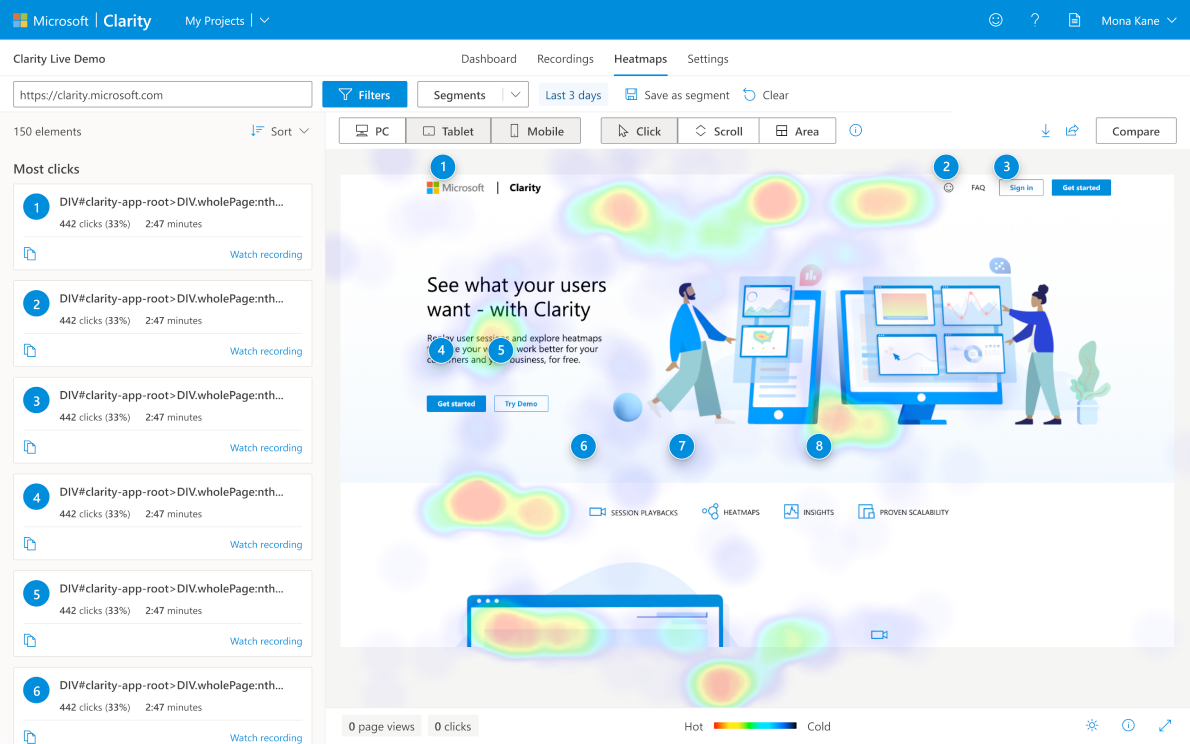 One of the reasons why PH can grow rapidly in a market dominated by GA is that it really solves the problem that GA has not been able to solve perfectly. GA wants to do everything too much, and the UA model obviously meets the traditional e-commerce model. , and in the face of the rise of SaaS, UA is completely unable to meet the demands of these customers. The drastic improvement of GA4 makes GA more flexible enough to cope with a variety of business models, but more flexibility means an increase in the cost of getting started. In this market, PH is aimed at customers in the SaaS field of toB, and many functions are also designed for this type of customers, so for us, we will naturally choose the latter between GA and PH.

But after all, it is a new product. There is still a big gap between PH’s analysis of traffic channels and GA. After all, GA360 plus products such as Adwords and Search Console, GA basically has no rivals in traffic source analysis. Other data types and markets Marketing products are basically integrated with GA, and PH can only make a bunch of apps that are not very easy to use. However, traffic analysis cannot replace GA with the ability of PH, so PH and GA should be used at the same time for a long time. The current SaaS products are almost all like this. There is no one product that can perfectly solve everyone’s usage scenarios. Especially in the field of toB, it is almost inevitable to use different products, and getting through each product will become a must for all toB products. preparation capacity.

This article is reprinted from: https://maxoxo.me/posthog/
This site is for inclusion only, and the copyright belongs to the original author.