Have you watched the latest Marvel movie “Thor 4”?

The powerful God-killer Gore, the debut of the female version of Thor, the cool special effects, the road woven by love and revenge, the box office of “Thor 4” broke the premiere record of “Thor 3” in the first week of its release.

When it comes to Thor, one can’t help but think of the iconic weapon coveted by many superheroes – the Thor’s hammer “Mjolnir” that can slavishly control thunder and lightning and come upon call!

In the movie, Quake is made by the dwarves on the planet Nidavi. There is no such race on earth, so is it possible for us earthlings to create Thor’s Hammer?

The answer is yes! Let’s look directly at the animation.

The young man standing, lying, and sitting in the animation is a member of the YouTube geek team ” Hacksmith ” (same name at station b), and this Thor’s hammer was built by their team.

After reading it, the editor is also itching, I don’t care, I want it too! What about this hammer?

How to make Thor’s Hammer

In the movie, Thor’s Hammer is smelted from the star core of a dying star, a white dwarf.

The global village obviously does not have the strength to smelt a white dwarf, but this does not prevent Hacksmith and his gang from turning around and realizing the flying function of Thor’s Hammer in disguise.

Let the things that can’t fly fly, I don’t know what my friends will think. What the editor thought of was the prop “Wiya” in the film and television drama, and the actor presented the flying effect on the screen through the Weiya.

The Hacksmith team also used a prop similar to Wia – a windlass. Through the three hoists and the program written by oneself, Thor’s Hammer can move freely in the space covered by the steel rope.

Go ahead and install the 3 winches on the field in a triangular orientation.

Write the program code for the visual movement of the winch on the computer.

Then, after a brief commissioning with a gamepad remote in place of the hammer’s winch, the team announced that the Quake’s powertrain was ready for use. Well, the car overturned once during the period, is this really safe?

Put on the 7 kg Thor’s hammer, and test the hammer can move again through the remote control rope of the gamepad. The little brother confidently announced that the Thor’s Hammer power plant has been completed!

So far, the power system of Thor’s Hammer and the transformation of the hammer have been completed. Next is the exciting “hammer-man” automatic navigation system.

Just like GPS navigation needs satellites as eyes, if we want to realize the automatic navigation of the hammer, we naturally need to give the hammer a pair of “sky eyes” that can see the target.

If you don’t want to stick a bunch of reflective strips, QR codes or connect a bunch of wires on your body, then using a camera for your eyes is undoubtedly the best choice.

The Hacksmith team chose the ZED second-generation binocular 3D camera as the “sky eye” for Quake. 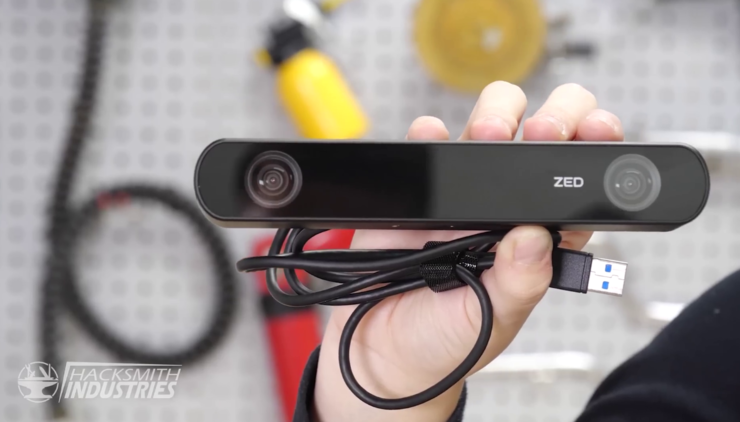 The main advantage of using ZED as a camera is that you can be lazy and do not need to write body tracking code, the camera will automatically track the body. It seems that the most troublesome thing has been solved by this camera

Applying the camera’s 3D tracking technology, the Hacksmith team wrote a set of code for the camera to transmit the Quake to the spatial coordinate position of the hand when the camera captures a person’s raised hand. Well, so far so good, until the actual testing session.

When you are beaten by something you have made, your mind is the clearest. Quickly think about what the problem is?

Ah, this is still not right, before this hammer could stop the car, but now it is dancing around people.

Shall I let Thor, the owner of Quake, try this hammer?

Thor’s Hammer recognizes the master, communicates with the master, and attacks the enemy! the code is wrong

Add billions of details to the code!

This time, it finally succeeded, the programmer guy tamed the wild Quake with code!

In the movie, Mjolnir also recharges to deal more damage when launching an attack.

As a result, the programmer continued to write hundreds of lines of code and added a throwing mechanism to the hammer. When the hammer was thrown, it would increase the flight speed by 300% in the specified direction to bring greater Impact damage, the effect is bloody like below.

After achieving the ultra-high-speed strike target, the hammer has obviously become dangerous, so it is obviously unsafe for a living person to participate in the hammer test on the spot. After all, the little brother cannot guarantee that his code can control this wild hammer.

So they erected a safety gate to test the next function ” targeted strike “. You heard that right, it’s the kind of Thor in the movie who throws the hammer out, and the hammer hits people on its own. 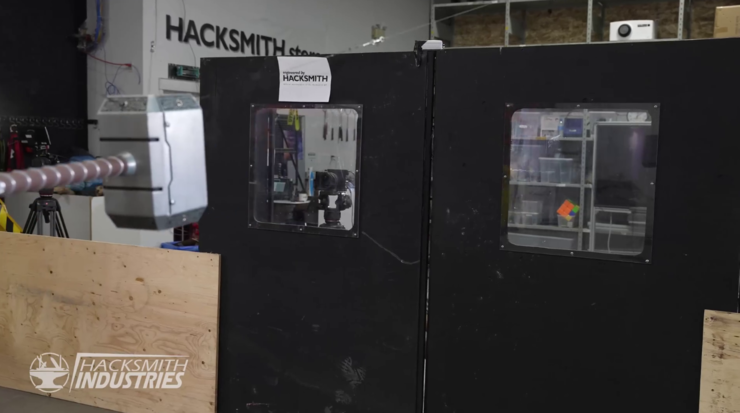 With this safety door, a sense of security arises spontaneously.

And the world inside the safety door is like this:

In the straight line attack, the threat is still very strong. In the future, friends should be careful when encountering this kind of cos into Thor in a confined space, maybe he really has a problem with the hammer.

The production of Thor’s Hammer comes to an end here. Friends who are interested in Marvel superheroes can also pay attention to the production team Hacksmith. They are keen to restore various superhero equipment, such as Batman’s grappling hook gun and Captain America’s shield, they have all made.

This article is reprinted from:https://www.leiphone.com/category/ai/tpfoREDxXLgXTlTB.html
This site is for inclusion only, and the copyright belongs to the original author.