Fatigue driving and distracted driving lead to traffic accidents are not uncommon. Once driving at high speed for a long time, fatigue and distraction are unavoidable, and the consequences are very serious. How to reduce the occurrence of such traffic accidents has plagued the auto industry for many years. Recently, the DMC driver status perception system launched by SenseTime gave a reference answer.

Recently, the two debut models of Honda China’s new pure electric brand “e:N” series, Dongfeng Honda e:NS1 and GAC Honda e:NP1, have been released successively. Both models are equipped with the DMC driver status perception system, which can accurately perceive the driver’s behaviors such as fatigue driving and driving distraction, and bring a unique safe driving experience through human-vehicle interaction.

“You look a little tired, do you need to be navigated to the nearest resting point?”

When the vehicle is traveling, when the DMC driver status perception system detects that the driver is fatigued, it will issue the above prompt through the “e:N OS” intelligent control ecosystem carried on the vehicle, and at the same time, it will give suggestions to help the driver. Timely detection and relief of fatigue. The system can also give reminders when drivers are distracted, talking on mobile phones and other dangerous driving behaviors while driving.

Through human-vehicle interaction, it can not only assist and regulate the driver’s safe driving behavior, but also improve the driving experience. So how does the system work? 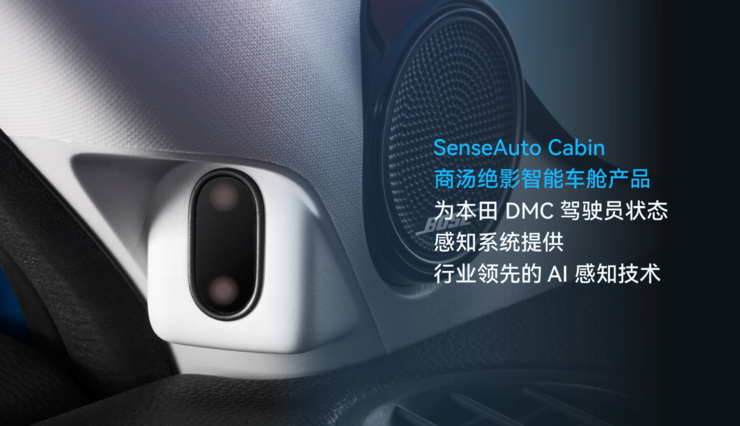 The AI ​​perception technology provided by the SenseAuto Cabin intelligent cabin product for the Honda DMC driver status perception system is the first link of the entire human-vehicle interaction link.

Based on the built-in infrared monocular camera in the cabin, the SenseAuto Cabin-D driver perception system can sense the driver’s expressions, sight lines, and gestures in real time, and accurately determine dangerous driving behaviors such as fatigue, distraction, and dangerous actions. , and quickly feedback the results to the DMC driver status perception system to give early warning and effectively avoid the occurrence of dangerous situations.

The application of AI perception technology has driven the evolution of the human-vehicle relationship from the passive interaction of “people controlling the vehicle” to the active interaction of “the vehicle actively reminding people”, bringing a new experience of “cars understand people”.

The cooperation with Honda’s “e:N” series is another expansion of SenseTime in the field of smart cabins. In the past two years, SenseTime has successively launched the child perception function and the cabin occupant health detection function.

The child-sensing function has been mass-produced on a number of models such as Chery JETOUR X70 PLUS, which can effectively avoid potential safety hazards caused by children staying alone in the car; and the newly launched cabin occupant health detection function at the end of last year has also been approved by well-known domestic cars. Enterprise projects are designated, and related models are expected to be listed in the middle of this year.

Under the growing trend of the pre-installation market of in-cabin vision AI applications, SenseTime has already taken the first-mover advantage.

At present, smart cars are also changing from the traditional “manufacturing” to “manufacturing + service” mode. With the accelerated popularization of L2+ and higher-level advanced driver assistance systems, the development of smart cars will be in the “human” for a long period of time. The stage of co-driving. In the first quarter of this year, SenseTime has completed the upgrade of its organizational structure and newly established a smart car business group. In the future, it will make greater efforts to develop the smart car business, and is committed to building Jueying into the most influential AI empowerment platform in the automotive industry.

This article is reprinted from: https://www.leiphone.com/category/transportation/FBCFCVSJWPvsT4xL.html
This site is for inclusion only, and the copyright belongs to the original author.