In 2007, the Foxconn factory was suffering from a sudden increase in the defective product rate to 10%. Neither the internal team nor several professional consulting companies invited from outside could make an effective analysis.

At that time, Zhang Zongyao graduated from National Taiwan University as a graduate student and came to Hon Hai Precision, the parent company of Foxconn, his most admired company, as an engineer.

Zhang Zongyao, a newcomer to Hon Hai Precision Industry, designed a machine learning model in the spirit of not being afraid of tigers. Through machine learning and linear analysis, it was found that temperature, humidity, and other key factors affecting manufacturing were included, and the optimal factors were simulated. parameters, so as to eliminate the skyrocketing product defect rate.

This is also the first time that he has used data to actually solve production problems in the manufacturing industry.

The root cause of the disease was confirmed, and this “big problem” that had plagued the factory for a long time was finally successfully resolved. The machine learning model designed by Zhang Zongyao saved Foxconn a potential loss of $20 million.

Several outstanding performances have inspired Guo Taiming, who has always been interested in supporting younger generations, and Zhang Zongyao has the title of “son of Hon Hai”.

To become a scientist is a vision that Zhang Zongyao, the founder of Xunengjisi, has been working hard to realize since he was a child.

It is precisely because of the odd fate with Hon Hai that Zhang Zongyao became one of the first people in Asia to implement machine learning in the industry.

In his eyes, many practical machine learning models do not have too high technical barriers. The key to big companies’ efforts to fail to analyze the reason is the inherent cognition limited by traditional manual experience.

In the face of rare events, existing human experience fails. “Businesses don’t use digital decisions most of the time, they rely on experience. They don’t feel things that don’t happen often.”

Through his study at Foxconn, Zhang Zongyao observed the necessity of AI participating in the transformation and upgrading of the manufacturing industry. At the same time, he also realized that although data analysis has obvious advantages, the threshold is high, and only a small number of people have this ability.

Later, Zhang Zongyao applied for the opportunity to go to MIT for a doctoral degree. In the Department of Electrical Engineering and Computer Science, he did a lot of AI automation research aimed at lowering the threshold for technology use.

In addition to technical research, the teaching philosophy of top universities and the overall entrepreneurial atmosphere will also bring a lot of inspiration to Zhang Zongyao’s entrepreneurial work in the future.

First, it must be clear about its value before doing something. MIT emphasizes that “research should be based on application”. The end of the course means that the research results will be implemented and the practicality will be guaranteed.

At that time, China’s manufacturing industry was reborn, and digital transformation has become a ticket for enterprises to enter the next era.

If you want to stay ahead of the competition in the industry, how to use data efficiently has become particularly important.

In the past, in the data decision-making process of enterprises, data analysts/scientists were required to complete a series of operations such as data extraction, cleaning, analysis, and modeling. Huawei calls “response on demand”, and the data model is difficult to reuse.

Behind the dilemma of system data is the lack of data scientists and the natural barriers of knowledge, skills and experience between technology and business. Under the high cost of investment, the decision-making of enterprises is obviously lagging behind, and the inefficient operation is easily eliminated by the market.

Facing the pain points of the industry, Zhang Zongyao founded Xinneng Jisi at the end of 2016, and decided to become a company that uses AI technology to assist industrial enterprises in better decision-making. JarviX, an intelligent decision-making platform.

The biggest feature of this platform is that there is no threshold for use, and everyone can become a data analyst.

The biggest drawback of traditional BI is its low efficiency.

Since 2014, self-service BI tools (also called second-generation agile BI) have begun to grow rapidly in China. They are oriented to business personnel and break the shackles of traditional industrial decision-making. However, BI products at this time still have limitations and are only suitable for Business personnel with certain IT capabilities. Moreover, in terms of data analysis capabilities, the current BI can only reach the depth of descriptive analysis among the four depths defined by Gartner (descriptive analysis, diagnostic analysis, predictive analysis, and indicative analysis).

The most ideal AI decision-making model is undoubtedly to allow business personnel to have extensive data analysis capabilities, and to be able to do more than just state statistical analysis of the status quo.

With the popularization of AI, big data and cloud computing, and the development of superimposed technologies such as natural language and machine learning, by 2019, intelligent BI, which is completely dominated by business personnel and has almost no threshold for use, begins to lead new development in China trend.

The intelligent BI that Xunengjisi is committed to exploring is relative to traditional BI and self-service BI.

At that time, most of the major players in the field of intelligent analysis came from overseas markets, and the decision-making systems used by domestic enterprises were often simple English-to-Chinese versions. The language gap has led to poor practical application results, and it has also discouraged many domestic enterprises that are interested in transforming into intelligent manufacturing.

In 2019, Xuneng Jisi officially landed in China, aiming to become an AI decision-making system that can interact in Chinese.

The main customers of Xunengjisi are medium-sized enterprises or factories with a value of 1-1 billion yuan. Typical landing scenarios are mainly divided into three categories:

In this series of demand changes, it is a crucial step to empower traditional business personnel with data analysis capabilities. Zhang Zongyao believes that “if data analysis will always remain in the hands of a few technical experts, there will be no way for artificial intelligence to do so. great progress.”

How can data analysis be more than the prerogative of a few experts?

Based on this core problem, Xinneng Jisi has developed a general-purpose SaaS based on augmented analysis technology – the no-code AI intelligent decision-making platform JarviX.

The name JarviX comes from the movie “Iron Man”. In the play, Jarvis is Tony’s AI butler and has super powerful data analysis capabilities. Tony, who has Jarvis, can quickly process various information and save the world.

However, Zhang Zongyao told Leifeng.com that he replaced the last letter “s” of Jarvis with the “X” of Professional X in “X-Men”.

In Zhang Zongyao’s perception, Jarvis+ProfessorX is a symbol of the ultimate technological ideal. “The smartest human brain combined with the smartest AI helps companies become the smartest companies.”

Zhang Zongyao believes that the role of AI is not to replace decision-making, but to assist decision-making. What they want to achieve is that with JarviX, everyone can independently and quickly have the ability to analyze data.

For business personnel who do not understand algorithms, the operation steps of JarviX can be simplified into three steps: key in keywords or questions, click on analysis results, and click on modeling to guide decision-making. 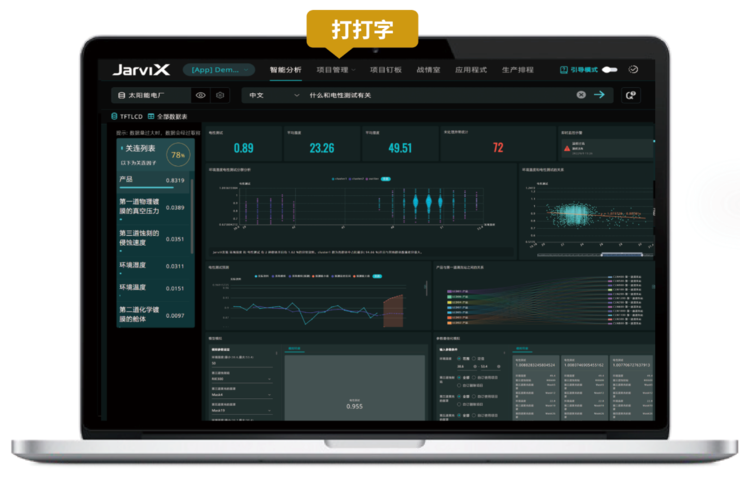 Correspondingly, the technical logic behind JarviX:

Step 1: Import all kinds of data (structure, semi-structure) into JarviX;

The purpose of JarviX is to solve the needs of various internal data sources without code, from intelligent production scheduling of management and supply chain, automatic inventory optimization, common material optimization, quotation analysis and forecasting, to guessing supplier base price and procurement analysis Prediction; from the production and production end yield optimization, defect root cause finding, predictive maintenance to production plant parameter optimization and other different scenarios.

“In the past, AI applications were often one algorithm corresponding to one application, and then a system was built. JarviX can combine various algorithms and generate applications in real time to meet different customer application needs.” Zhang Zongyao said.

Most SMEs do not even have a complete IT team, let alone build a data team to improve digital decision-making capabilities. Zhang Zongyao wants to help those small and medium-sized enterprises that do not have enough resources to complete digital transformation, so that they can use JarviX to realize the rapid import and large-scale application of data, and quickly and effectively assist in decision-making in different business scenarios.

In the supply chain department of a consumer electronics manufacturer, after applying JarviX, the project preparation process was shortened from 4 people and 5 days to 5 minutes, and the analysis and sales volume increased by 95%; the decision-making time was reduced from 1 day to 30 minutes, and the time cost was reduced by 93%.

According to IDC data, by 2025, the scale of China’s business intelligence software market will reach 1.6 billion US dollars, and the compound annual growth rate of the overall market will be 21.6% in the next five years.

However, from an objective point of view, in the manufacturing industry, technologies such as AI and big data have not been widely used in decision-making. Next, how to share the cake from this market?

The Xuneng brainstorming team will focus on communication with the world this year.

When it first started its business, Xinneng Brainstorm was facing an uncultivated emerging market. It is often “exhausted all the brains to explain to others”, but the other party always has a confused expression on his face.

The most memorable time was when Zhang Zongyao and a manufacturer who had the intention to cooperate met again after a week. The other party excitedly said that he had found an AI company that was very similar to Xuneng Jisi, but he found out that it was a machine vision company, Zhang Zongyao said. Can’t laugh or cry.

The change in concept was the dilemma faced by the business intelligence software providers at that time. In recent years, with the continuous advancement of the overall smart manufacturing situation, the entrepreneurial environment has long since changed.

Zhang Zongyao’s most intuitive feeling is that customers will take the initiative to bring problems and come to seek solutions.

Although the current market is no longer difficult to cultivate independently in the barbaric period, the development of intelligent BI in China has only been three years, and the gap between business intelligence software providers and enterprises still exists.

After careful research, Zhang Zongyao found that those products that were abandoned by the company in the corner were actually not bad in themselves. The problem was that the product manuals were not written in detail enough.

Every detail from top to bottom is critical to the success of a product. It is also a job that requires a lot of time and energy to clearly describe the functions and values ​​of the product. “Now two people on our team are dedicated to doing this, and I find this is where we need to keep strengthening.”

After internal market research, Zhang Zongyao discovered another fact from his past experience, that is, the most successful customers, the leaders themselves have a certain degree of data thinking, and can slowly guide the formation of a positive cycle within the enterprise.

“We are lowering the threshold, but that doesn’t mean they don’t understand anything.” Zhang Zongyao told Leifeng.com.

This means that when companies are more aware of what kind of problems they need AI to solve, the better the actual landing effect will be.

How to quickly form positive feedback within the enterprise with almost no education, so that business personnel have data thinking, is another problem that the entire industry will continue to overcome, including Xinneng Brainstorming.

This article is reproduced from: https://www.leiphone.com/category/aijuejinzhi/SN59CPEn4wNDXcO2.html
This site is for inclusion only, and the copyright belongs to the original author.