Foreword : Since its establishment in 2009, the Peking University Visual Development Frontier Postgraduate Summer School has long been committed to cultivating young visual talents at home and abroad. The thirteenth summer school will be held from July 11 to 24, 2022. The course design is completed by students from visualization-related majors, design majors and application fields. We will introduce related course design works one after another.

The course design project of “The Symbol of Pottery, the Origin of Chinese Characters – The Distribution of Symbols in Early China” focuses on the systematic arrangement and research of the symbols in the Neolithic Age to the end of the Shang Dynasty, and the budding and evolution of early civilization can be experienced from the distribution of time and space.

The invention of writing is an important sign that human society has entered the era of civilization. The ancients “looked up at the trend of Kuixing’s round and curved, looked down on fish, bird feathers, mountains and rivers, and created writing”, so that their experience, perception, concern and prayer can be recorded. and passed on from generation to generation. In the early days of China, the depiction of symbols was regarded as the predecessor of writing, which was a stage in the development from no writing to having writing, and belonged to an immature writing. Its research is of great significance for discussing the formation of Chinese civilization and Chinese characters.

The group collected early Chinese symbols according to the hierarchical structure of “region-culture-site-carrier/symbol”, and sorted out 1378 carrier images and 1692 symbols of 10 regions, 51 cultures and 166 sites. Image, spanning 7000 years of history from 7000 BC to 1 AD.

In terms of color, the work is carved with the brown of pottery, the cleanness of jade, the gray of stoneware and the blue of ink wash. 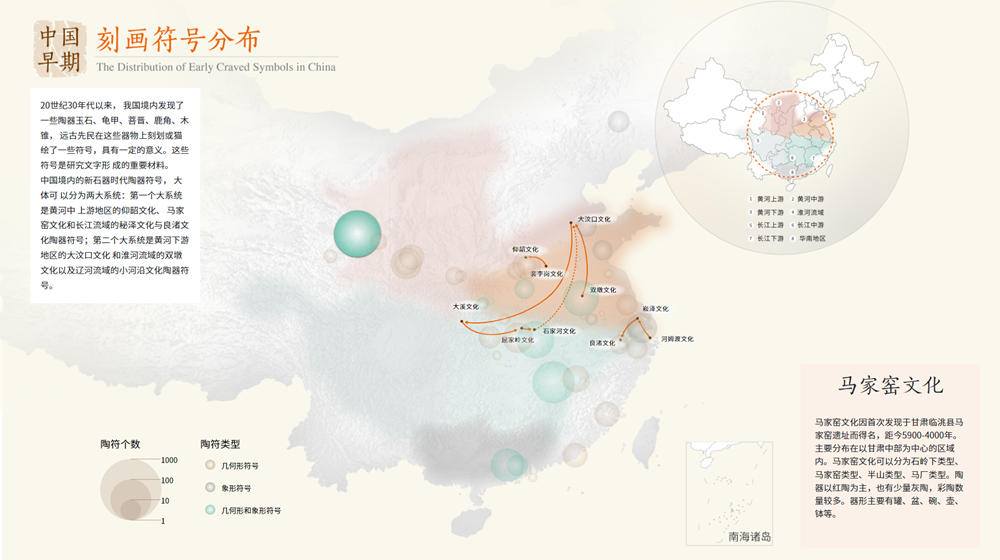 Cover image of “The Talisman of Pottery, the Origin of Words” 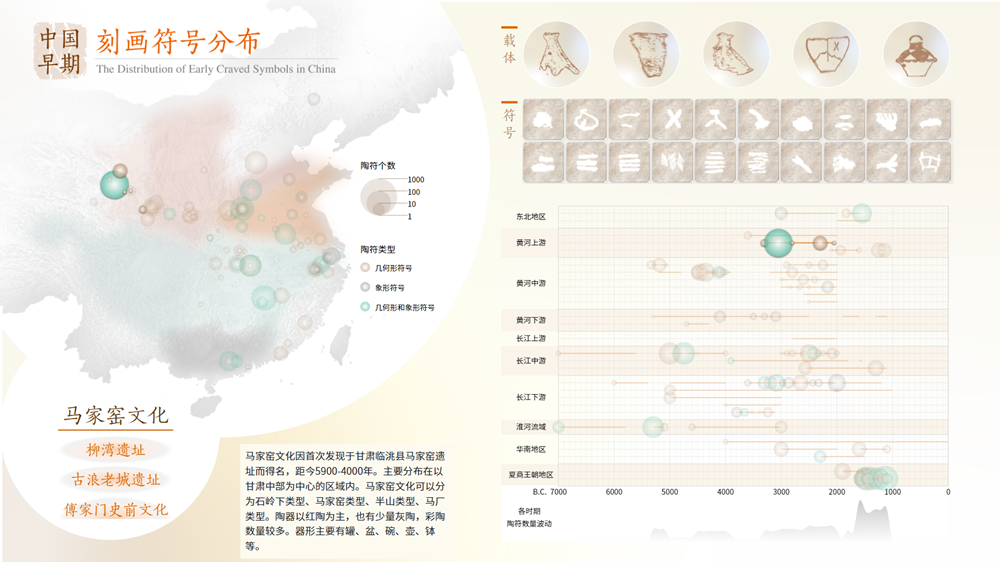 The cover image of the work uses a map of China as the main element, and different coloring shows the distribution of the depiction symbols at the regional level. The hollow gradient circles depict the geographical distribution of each depiction symbol at the cultural level, the color represents the type of depiction symbol, and the size indicates the number of symbols preserved in the culture. The arrow directions between cultures outline their fusion and evolution with each other.

After selecting the corresponding culture, you can find out the distribution of the depiction symbols at the site level on the map of the content interface, and learn more about the specific content information of the related sites. 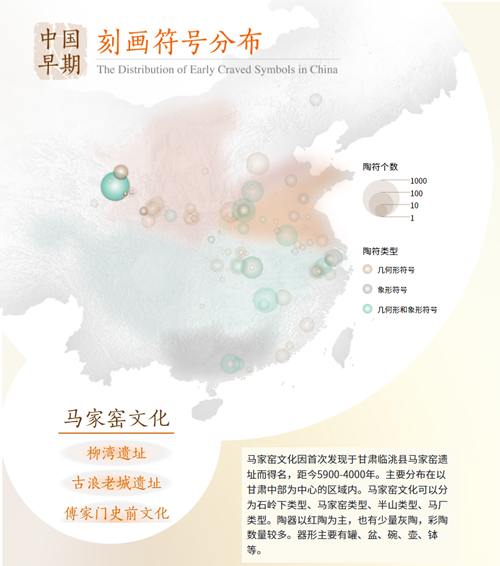 The visualization provides pictures of carriers and symbols based on the classification unit of the site level, and you can see various depiction symbols and their artifacts excavated in a specific site.

Vectors and symbols in ruins

The visualization also provides the temporal distribution of the early characterization symbols. Cultures are divided into different parts according to their regions, and different cultures in the same region are arranged in branches to avoid overlapping in time. Each culture is represented as a line, and the unearthed symbols are arranged on the left and right of the site, and the size of the circle indicates the number of unearthed symbols. The area chart at the bottom depicts the fluctuations in the number of unearthed symbols over time. High sky and thick soil, desert Gobi, Qinghai has never lacked great beauty; soft sand, gurgling water, under the fine products, there is a subtle beauty. The Huangshui River runs all the way, and when it flows to Ledu District, it changes from a branch shape to a fan shape. There is a small village called “Liuwan” on its north bank, where there is a willow excavated from Majiayao depicting symbolic culture. Bay Ruins.

Qinghai is known as the “Kingdom of Painted Pottery”, while Liuwan is called “the hometown of painted pottery”. Today, let’s travel around the Liuwan ruins, and experience the art of carving dragons in Taofu from the distribution of time and space.

At this moment, when we came to the starting place of Yunyou, what caught our eyes was the color of ingenuity that integrates the brown of pottery, the purity of jade, the gray of stone and the blue of ink and wash. The Majiayao culture to which the Liuwan site belongs is located in the upper reaches of the Yellow River. The total number of pottery symbols is close to 200, with geometric shapes as the main type of symbol depiction. 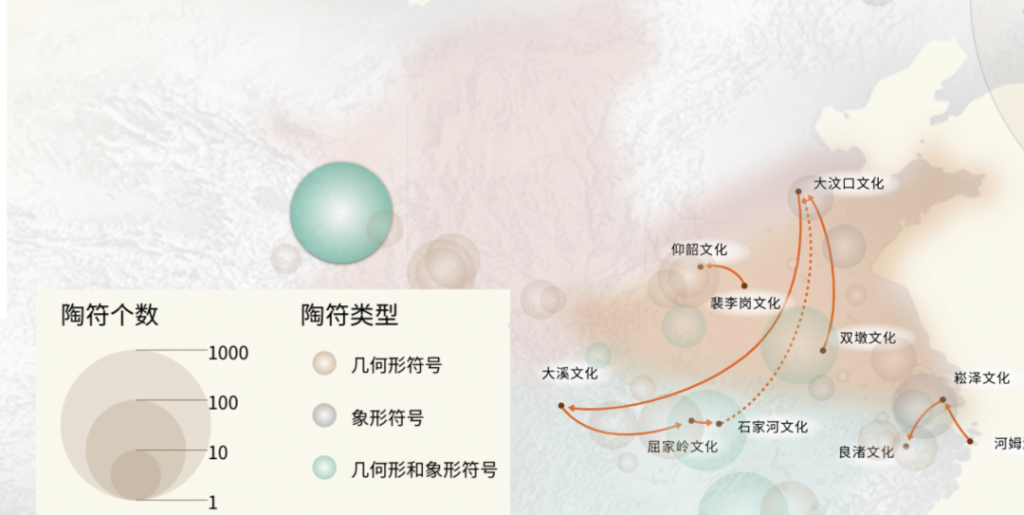 Looking at the circles representing the Majiayao culture on the map, we can focus on the details that characterize the symbols from the general overview. A total of 6 sites belong to the Majiayao culture, among which the Liuwan site has the largest number of pottery symbols unearthed. There are 6 sites in Majiayao culture

The carrier pictures in the Liuwan site are relatively well preserved. Most of the carriers depicting symbols are pottery pots, and they are depicted in relatively fixed positions of the pottery pots.

The depiction symbols are mainly arranged and interspersed with simple lines, and have rich pictographic meanings. For example, some depiction symbols represent the sun; some of them have been shaped like some characters in ancient Shang and Zhou texts.

The upper reaches of the Yellow River where the Liuwan site is located is located in the northern part of the unearthed areas of the pottery symbols (the upper position in the view is the geographically northern position of the distribution area of ​​the depicted symbols), which spanned from 3300 BC to AD The history of more than 1,000 years in the first 2050 years is a splendid stroke in the long history of symbols. 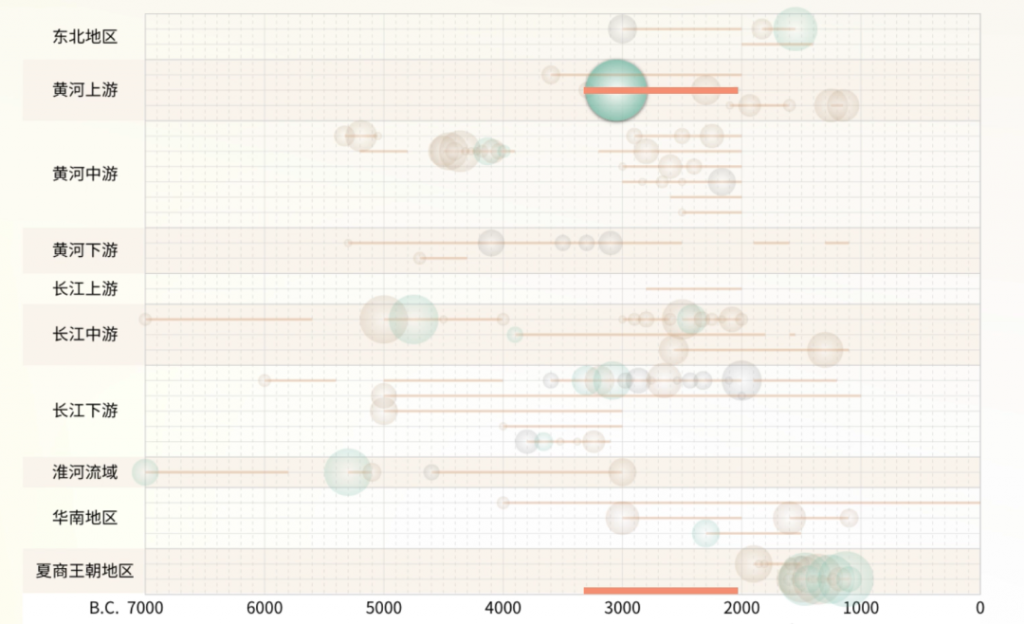 The Liuwan site has a history of more than 1,000 years

Those artifacts created by the ancestors of Liuwan tell us ancient stories and lead people to pursue their ancestors, which is the call of the millennium culture, and it is also the children of Hehuang and even the descendants of China to the community of destiny of the Chinese nation. look forward to.

In the long history of human beings, the Chinese nation has rich treasures of writing and art. The early Chinese depiction of symbols – these wonderful combinations of horizontal and vertical outlines, are ingenious in structure and far-reaching, just like the cultural characteristics of Chinese descendants, yin and yang complement each other and are harmoniously unified. It is the historical accumulation of our ancestors from generation to generation that brewed the unparalleled Chinese civilization!

This visualization is a preliminary exploration of related early characterization symbols. The data comes from relevant academic papers. Among them, the interpretation of history and culture also needs experts to help correct possible fallacies; further improvement requires further cooperation with experts in related fields. Interested scholars are welcome to contact: [email protected]

The excellent course design of the summer school will be successively included in the “Visualizing China” webpage
http://vis.pku.edu.cn/vis4china 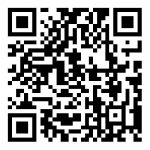 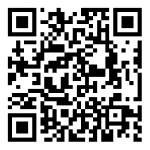