As a traditional architectural style, the ancient pagoda is a concrete manifestation of ancient Chinese politics, culture, folklore and religion. The majesty, towering, majestic, vigor and harmony of the ancient pagoda not only shocks us, but also inspires us to re-call our senses and minds to listen, observe and understand the sounds, colors and structures behind the data and materials of the ancient pagoda. Dismantling the historical context, reorganizing and constructing the taste of the ancient pagoda. Everyone is welcome to learn about and experience our projects, climb the tower together and look far away, Feng Xu Yufeng.

By analyzing the project background and data characteristics, we define the target users of the visualization system as non-professionals who are interested in Buddhist culture and Buddhist architecture. The main visualization task of the project is to present the overall context of the development of ancient pagodas in my country, that is, in the context of time It presents the trends and laws of basic data such as the number and height of ancient pagodas; presents important time nodes for the development of ancient pagodas, that is, the time nodes when various shapes appear or increases rapidly in number, and then excavates key events in the evolution of ancient pagoda localization. ; Present the geographical and spatial laws of the distribution of ancient towers, and guide users to discover the structural and functional characteristics of each shape. 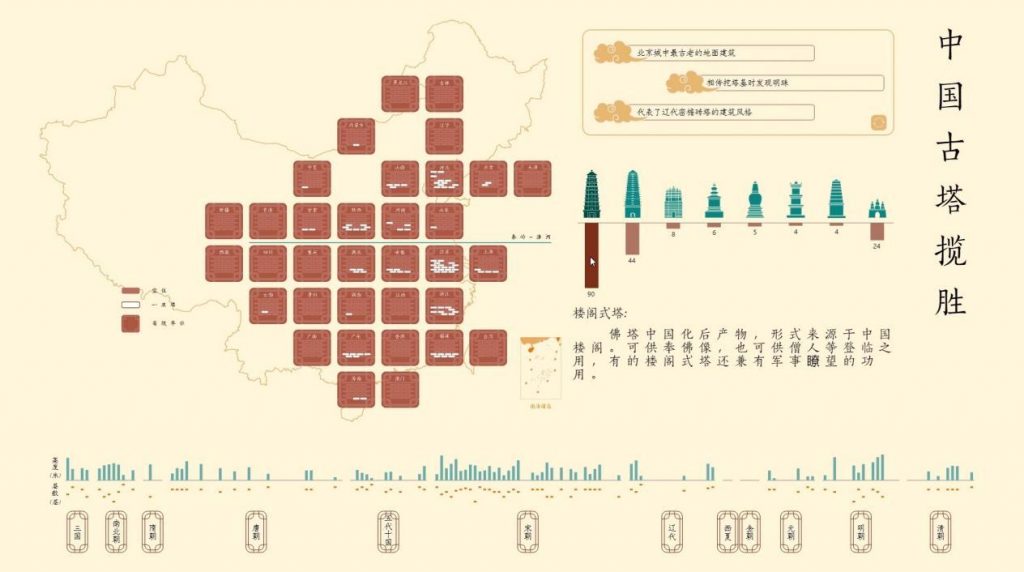 In order to improve the readability of multi-dimensional information and help users gain better insight into data laws, the visualization system provides a timeline module and a shape module that can interact with data. Through the interactive shape pattern, users can intuitively understand the characteristics and regional styles of each ancient tower shape based on the introduction and geographical distribution. In the time dimension, users can overview and compare the number of ancient towers built in different periods, the similarities and differences between the heights and layers of each tower; they can also use the geographic and historical dimensions to explore a certain period in depth, and the map will display the corresponding Geographical distribution of ancient towers built during the period, and more details on a particular tower.

Finally, we also designed the “exploration” module that randomly pushes tags to present the knowledge encyclopedia of the ancient pagoda from another exploration dimension, further enriching the user’s interactive experience. When the user interacts with a cultural value label of interest, the map module will locate the corresponding position of the corresponding ancient pagoda and expand the details module. If you are not satisfied with the push results, you can get three new tags by refreshing.

Exploration and discovery – the shape distribution of ancient towers

Pagodas belong to Buddhist buildings. They were originally buildings for worshiping or collecting Buddha bones, Buddha statues, Buddhist scriptures, and monks’ remains. After being introduced into China, they were combined with Chinese native pavilion-style buildings to form a traditional Chinese building with a specific form and style. . On the one hand, the temporal and spatial distribution of ancient pagodas is closely related to the different religious beliefs that flourished in different dynasties;

In the form module, we can see that the pavilion-style pagoda and the dense eaves-style pagoda are the main types of pagodas in my country. Interactive screening of the shapes and patterns, observation and comparison of the distribution of the number of towers in the abstract map will reveal that the pavilion-style towers appeared the earliest, the most widely distributed, and the largest number, which is the mainstream of Chinese tower development. The pavilion-type tower form is derived from the Chinese pavilion, which can be climbed and watched. The southern climate is mild and the scenery is beautiful, which is suitable for climbing the tower for sightseeing. When the weather is hot, the tower is cool and refreshing. It can also be observed from the figure below that the regional distribution of pavilion-type towers shows a trend of more south of the Yangtze River and relatively less in the north. 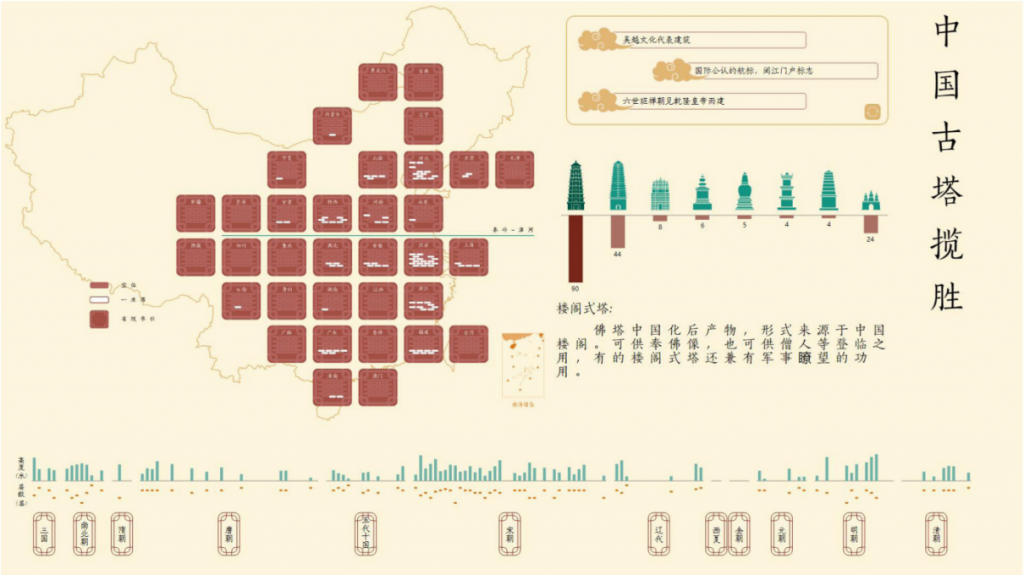 The dense eaves-type tower has evolved from the pavilion-type tower. By observing the distribution on the time axis, we can see that it appeared later than the pavilion-type tower. It began in the Eastern Han or Southern and Northern Dynasties, prospered in the Tang Dynasty, and matured in the Liao and Jin Dynasties. The dense eaves towers are mostly solid towers. The meticulously stacked tower eaves make the overall shape strong and delicate at the same time. They have strong wind and sand resistance and can adapt to the favorable weather and geographical conditions in the north. The regimes active in the north, such as the Liao and Jin Dynasties, developed rapidly. 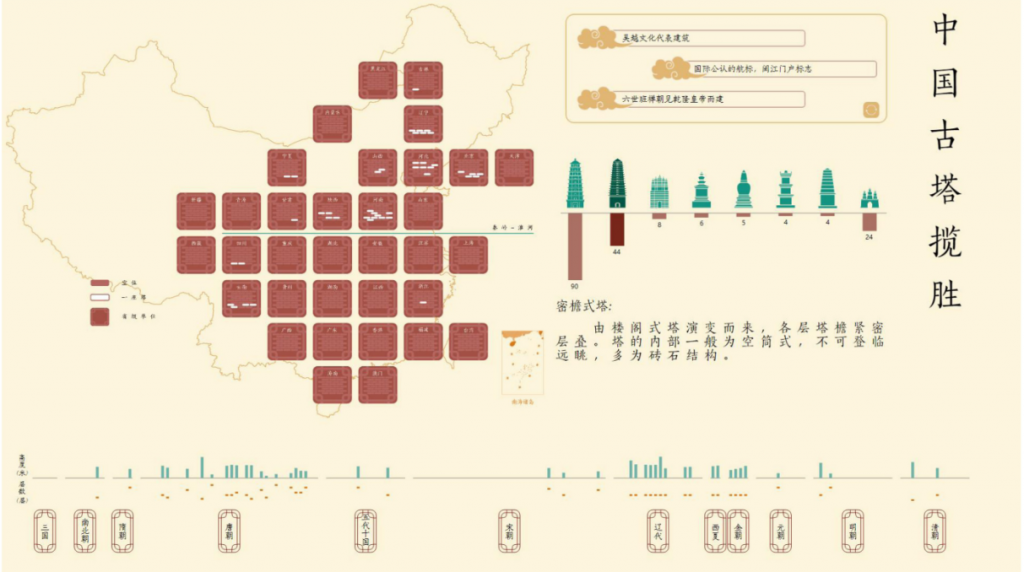 In fact, the symmetry of the ancient pagoda, its layers, and its complex and progressive architectural form are itself a manifestation of information visualization, which embodies and conveys people’s visions and emotions for a happy life thousands of years ago. The time for this project is limited, and there are still regrets in data collection, event conclusion insights, etc. I would like to use this work to convey the momentum and rich spiritual and cultural connotation of the ancient pagoda, and to encourage you on the road of inheriting the excellent national culture. 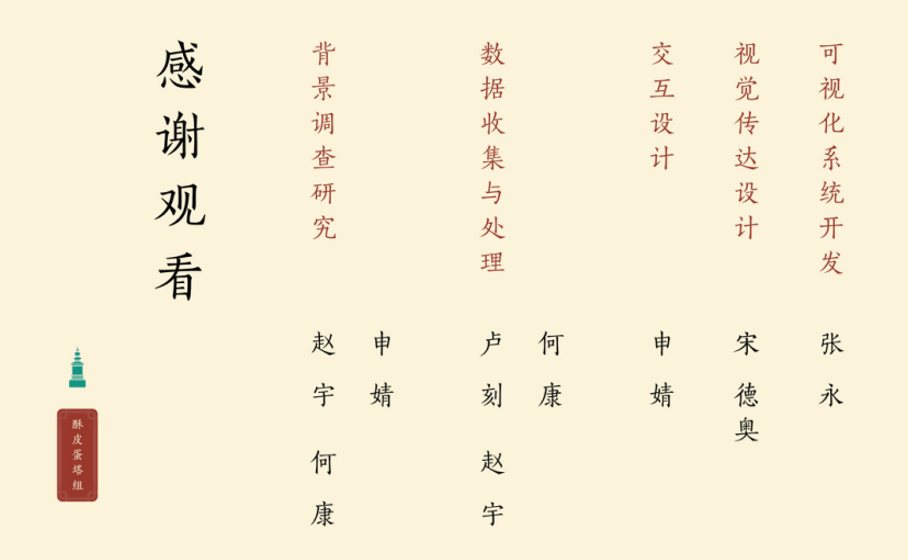 The excellent course design of the summer school will be successively included in the “Visualizing China” webpage
http://vis.pku.edu.cn/vis4china

This article is reprinted from: http://vis.pku.edu.cn/blog/chinese-ancient-pagoda-one/
This site is for inclusion only, and the copyright belongs to the original author.